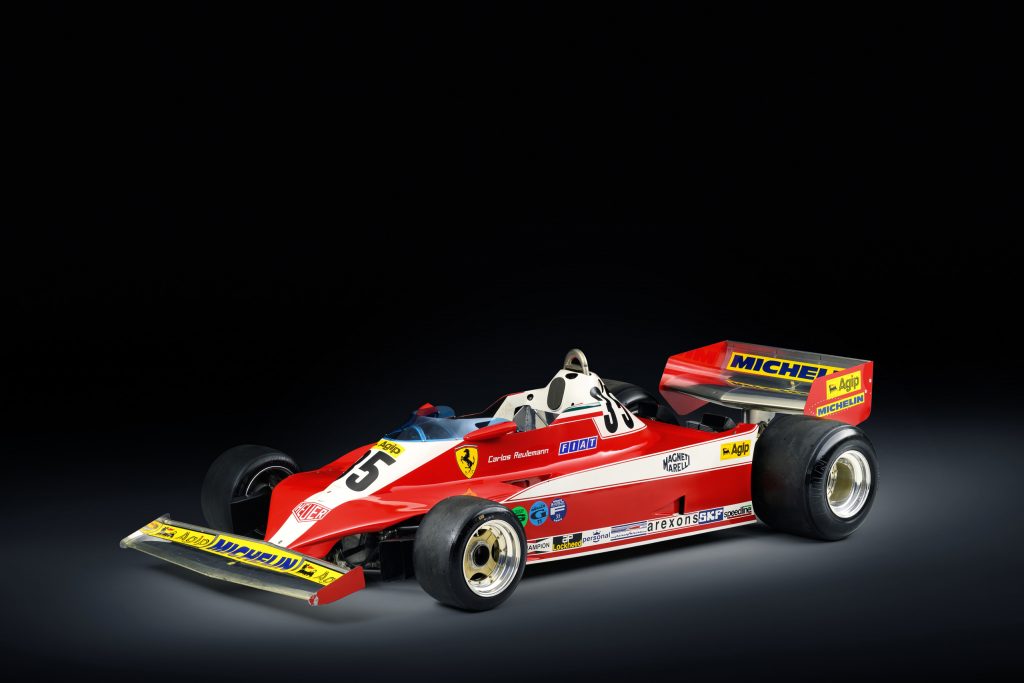 This marvelous race-winning Formula One Ferrari marked the start of a turn around in the fortunes of the Italian scuderia. To put the T3 in context, its T2 predecessor suffered a very poor ending to the 1977 season, failing to get the necessary warmth into its cross ply Goodyear tyres. In fact, brand new Ferrari driver, Giles Villeneuve, recalled the T2 feeling ‘unbelievably bad’ as he slipped and slided his example around Mosport during the Canadian Grand Prix that year.

Ferrari designer, Mauro Forghieri spent much of 1977 creating a brand new chassis design in which the flat-12 engine would continue into its ninth year of competition. Given the problems with the Goodyears, the new chassis was conceived around the defined characteristics of the Michelin radials. Other notable differences between the T2 and the T3 were the completely new front suspension design and notably different upper body aero, which – in stark contrast to the T2 – sported a square-cut, predominantly flat body top and engine cover, maximizing the air flow both over and under the centre pillar rear wing.

Although not ready to be debuted until the third round of the championship at Kyalami in South Africa on 4th March, the T3 showed promising form during pre testing for the race. However, even though now on Michelins, tyre troubles blighted both cars leading to a dnf classification all round. Gilles Villeneuve used Chassis 32 in this very race.

Switching to the more experienced hands of Carlos Reutemann for the grueling Long Beach street race on 2nd April, Chassis 32 no doubt benefited from the team’s ability to get on top of its tyre selection pre-race, allowing Reutemann to take pole position. Team mate, Villeneuve, placed just behind Reutemann in second place. Villeneuve led for much of the race, but an entanglement with a back marker gave Reutemann and Chassis 32 the opportunity they needed and the duo took the chequered flag to win the race. This was the first victory for the T3 model.

The rest of the season was largely frustrating given yet more tyre problems, although Chassis 32 did achieve the prized pole position at the Monaco Grand Prix in May. Eventually, Frenchman and renowned collector, Jacques Setton (who curated the infamous Setton Collection in France), bought the Ferrari. Unseen for some time, in May 1987, the Ferrari was displayed at the Cartier ‘Hommage a Ferrari’ exhibition in Paris. Later that year, it was offered for sale by Jay D Felter of the USA, who handled the sale of many of Setton’s cars when his collection was dispanded.