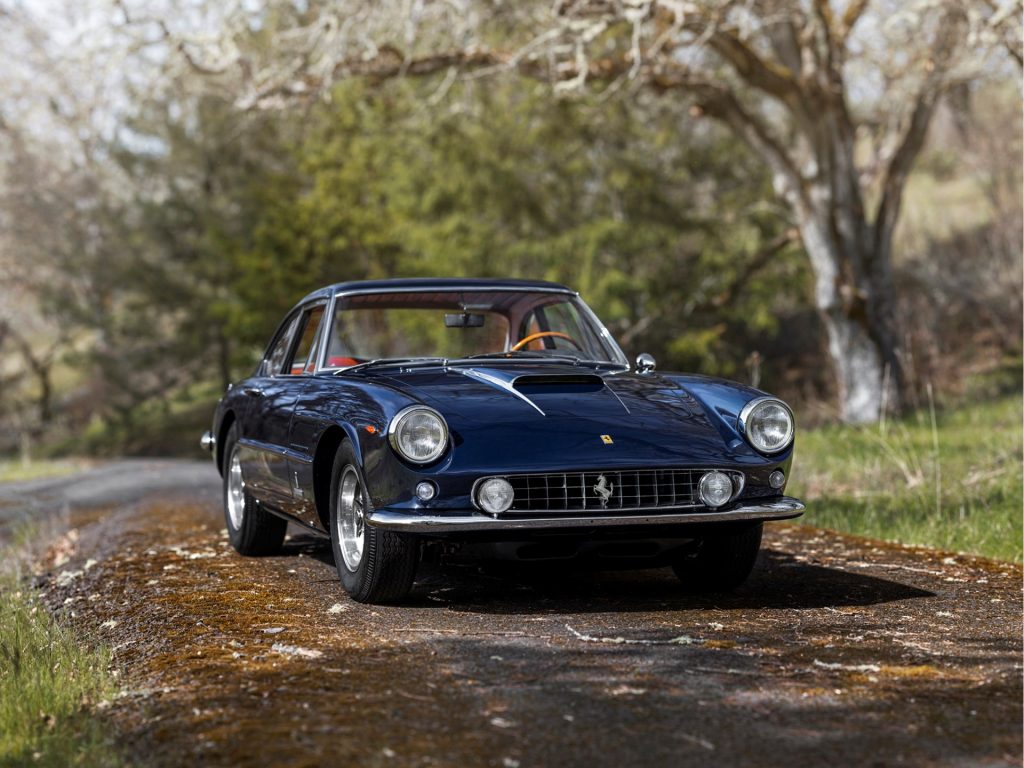 The fifth of only 17 short-wheelbase 400 Superamerica Aerodinamico coupes built, chassis no. 2631 was completed by the factory on 3 November 1961. According to accompanying factory build sheets, the engine produced 296.1 bhp at 6,500 rpm during factory testing. Originally built with open headlights, it was finished in Blu Lancia over a Blu Grigio leather interior with matching carpets in Blu Scuro.
According to Ferrari historian Marcel Massini, chassis no. 2631 would remain in Italy with its first owner, Emanuele Rivetti, but only for a year before being exported to the U.S. Shipped to Luigi Chinetti Motors in 1962, upon its arrival the car was sold by successful privateer racing driver Bob Grossman to John Mecom Jr., son of Texas oil magnate John Mecom Sr. and a previous owner of the New Orleans Saints NFL team. Prior to its delivery to Mecom while the Superamerica was still with Grossman, it was tested in Car & Driver magazine and graced the cover of the April 1963 issue of the magazine.
Chassis no. 2631 remained with Mecom for the following seven years and was then sold to Paul Schreiber of Palos Park, Illinois. During his ownership, the car was shown at Emilio Tosi’s Ferrari Club meeting in Illinois in October of 1973 and made another appearance at a Ferrari Club of America event at Joe Marchetti’s Como Inn in Chicago in April of 1978. The Superamerica’s next owner would be Karl Dedolph of Wayzata, Minnesota, who subsequently sold the car to Wayne Nelson of Indianapolis, Indiana. The car would call the Hoosier state home for the next few decades after it was sold to noted enthusiast and vintage racer Tom W. Mittler of South Bend. After Mittler’s sudden passing in June 2010, the car would remain with his family and estate for the next few years.
During this time the car received Ferrari Classiche certification, confirming that it retains its original chassis, engine, gearbox, and differential. The certification binder accompanies the car today and notes that it has been fitted with triple Weber 40 DCZ/6 carburetors (in place of the original Solex C40 PAAI carburetors) and Koni shock absorbers (in place of the original Miletto shock absorbers). Sold by the Mittler family in 2014, the car was purchased by its current owner, a noted collector based on the West Coast, and has remained with him ever since.