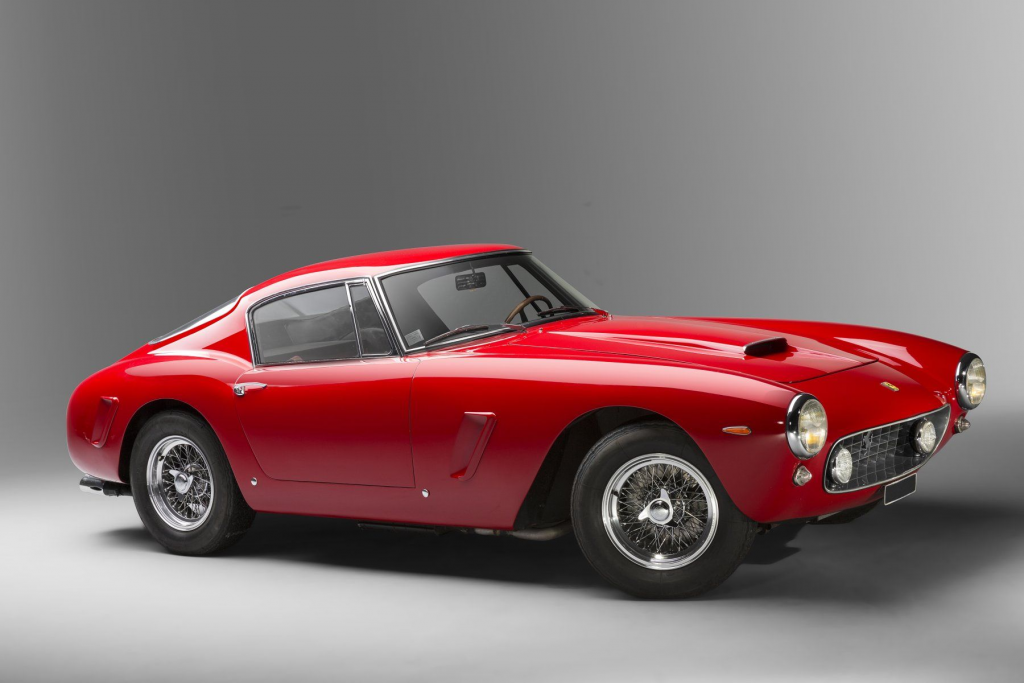 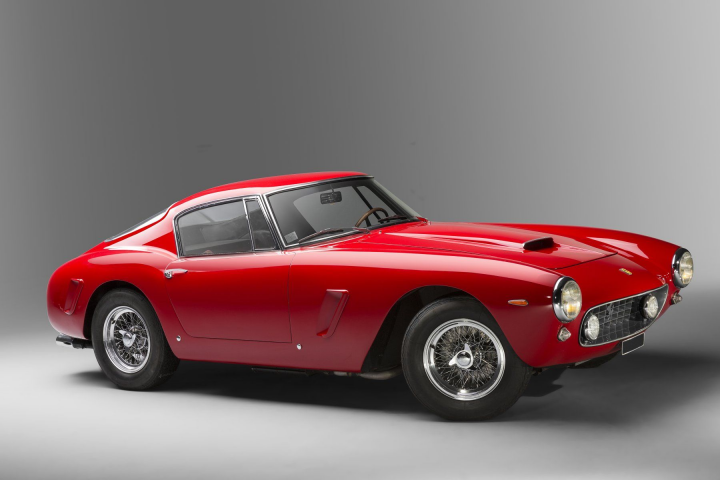 The example we are presenting, chassis no. 2917GT, first appeared in public at the Paris Motor Show in October 1961, on the stand of the Ferrari importer Franco-Britannic Automobiles. The car was presented in ” Azzuro ” blue with natural coloured leather upholstery. It was sold during the first week of the exhibition and replaced with a California cabriolet #2935GT, which has subsequently become famous as the star of the Baillon collection.
The lucky first owner of this 250 GT was Monsieur Jacques Fildier, an architect from Paris who was passionate about sports cars. Having a good relationship with the prefecture, he was able to obtain the special registration 29 LT 75. The number 29 was reserved for him and used on every car he registered! He kept the car for two and a half years before selling it on 27 March 1963 to Mr Gaston Burger, an industrialist from Rueil-Malmaison, who registered the car 4905 SE 78. He owned it for just seven months, the time it took for his new 250 GT/L (Lusso) to be delivered, and our car then returned to the importer, joining the stock of Franco-Britannic on 21 November 1963, and registered 6190 PJ 75. It is mentioned with number ’66’, the colour code for its shade of blue, in the list of registrations. A week later, on 27 November, the car sold to Georges Gal, of Avenue de Villiers, in Paris. Then, on 4 August 1966, it was acquired by Mr Battisti and there was a change of scene : the car left Paris for Nice and the Côte d’Azur. It was registered 394 QJ 06 and the owner, an amateur racing driver, used it to take part in various hillclimb events:
– 1st May 1967, Tanneron hillclimb
– 11 November 1967, Col de l’Orme hillclimb
– 17 March 1968, la Roquette hillclimb
– 7 April 1968, Ampus hillclimb
– 29 September 1968, Col de l’Orme hillclimb 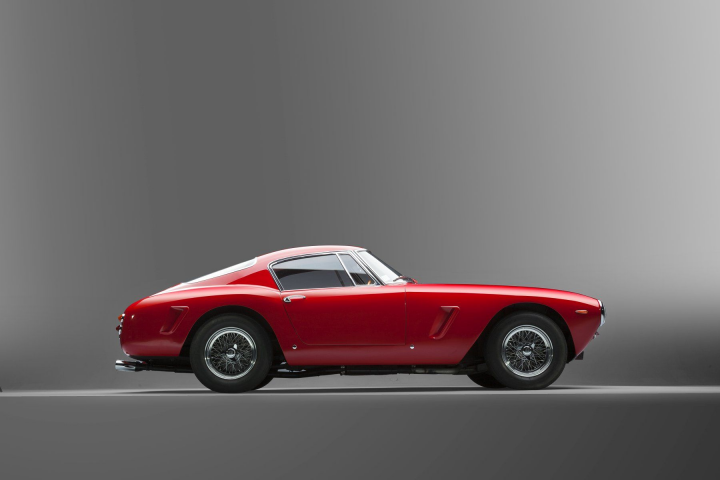 Our Ferrari then returned to Paris, where it was sold on 25 February 1969 to Yves Pascerszky, of Rue des Écoles, and registered 564 VJ 75. In November of the same year, he consigned the car to the garage Stand 14 belonging to Pierre Landereau, in Montlhéry. An automobile aficionado, Pierre Landereau rubbed shoulders with top French drivers and this would have included, at that time, Jean-Pierre Beltoise, who lived close by, and Jacques Laffitte, a great friend for years. Landereau went on to take part in the Rallye Paris-Dakar some twenty times. At the end of 1969, he remembers welcoming into his showroom a young 22-year old man who had come to buy a Peugeot 204 saloon with sunroof with the money his father had given him to buy his first car. However, on walking into the showroom, the young man fell madly in love with a red 250 GT berlinetta sitting amongst an array of more ordinary machines. He had a change of mind and following three weeks of negotiation decided against the rather debonair Peugeot, in favour of the Ferrari which he bought for the sum of 20 500 francs ! 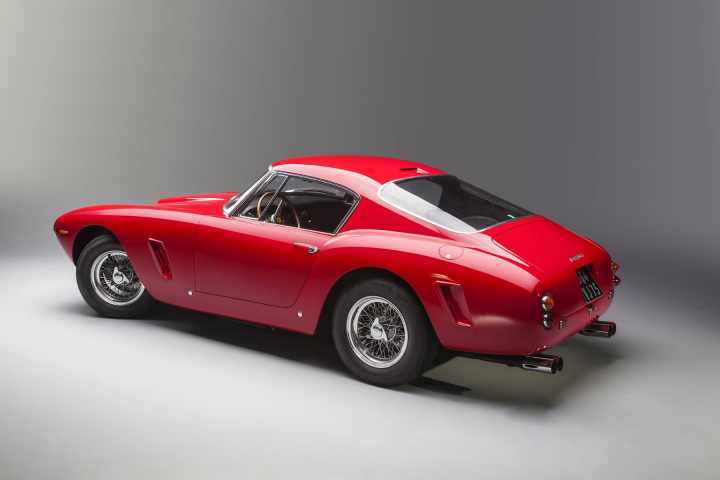 Since then, the young man has grown older and his collection has evolved, although he has always kept the Ferrari, which has now been in the same hands for almost 50 years!
Since 1969, he has covered 100 000km, with 95% of this taking place between 1969 and 1985! He has never used the car competitively in rallies or historic races, preferring just to drive it at weekends in the area around his property in Brittany, where it is carefully stored in his air-conditioned garage. The car has been maintained throughout its life by Ferrari (Pozzi and Modène). The owner has enjoyed a special relationship with the marque, and notably with Jean Todt, which has enabled him to call on Ferrari’s mobile workshop and two mechanics for routine and regular maintenance. In 1985, still in love with his car and wanting to make sure it was mechanically and cosmetically perfect, he send it to Sport Auto Modena. The invoice for this project is available in the file, listing every element of the mechanical work undertaken, including a complete engine rebuild. On the cosmetic side, the owner had the red paintwork refreshed and the front seats re-upholstered. The door panels are original, in black leather, as is the rear trim. 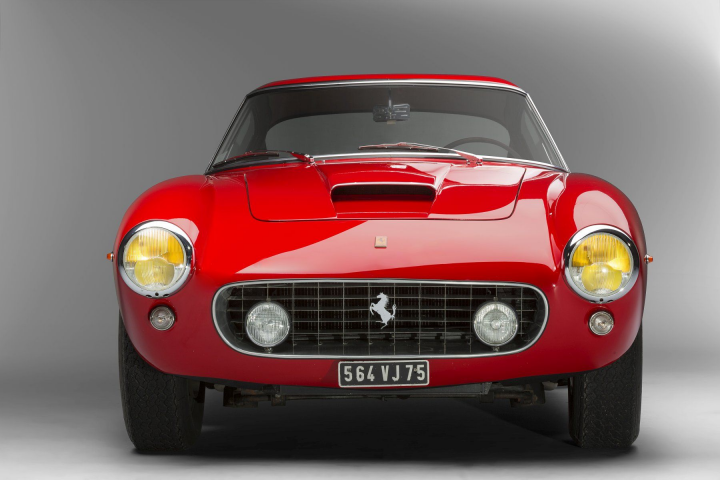 At the beginning of May this year, we sent #2917GT to the French Ferrari importer – Charles Pozzi in Levallois-Perret, for a full and official inspection of the numbers. The chassis, engine, gearbox, rear axle are original; so it is ‘matching numbers’. A ‘Lettera conferma dati’ established by Ferrari Classiche comes with car.
There is a comprehensive file accompanying the car; it contains a host of Ferrari invoices (including one from Modène dated 1970), written documents and photographs taken in workshops, on trips during the 1970s, and at various hillclimb events. The original bill of sale from Stand 14, signed by Pierre Landereau is also in the file.
Making the film that can be seen on www.artcurial.com/motorcars gave us the opportunity to drive this exceptional machine on the Bugatti circuit at Le Mans. Sitting behind the wooden Nardi steering wheel with the seat adjusted to your size, it becomes clear to what extent the car was built for driving. The gear lever is close to the wheel, making it is easy to change gear precisely and swiftly. The driving position is an invitation to race but is also perfect for an exhilarating road trip, accompanied by the sound of the V12 engine and stainless steel exhaust. The car slides naturally in the corners and positions itself instinctively. The oil pressure is perfect, and the acceleration direct. This 250 is very well set up. One can sense that the running gear and suspension is sound and that this is a car that has always been well maintained. If you walk round the 250 SWB Berlinetta, you will see how the design exudes its purpose! Its lines are perfect, its curves are caresses.
Presented today in “Rosso Corsa” with black leather interior, it would be worth returning the car to its superb original livery, Azzuro with natural- coloured leather interior which would make it an extremely exclusive Passo Corto Berlinetta. 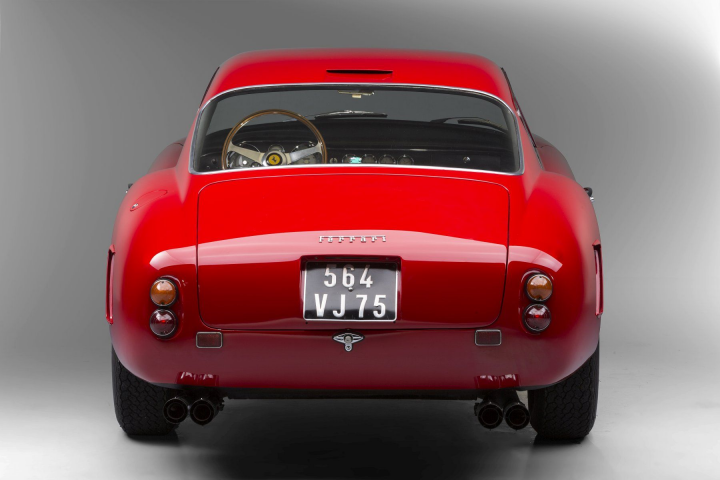 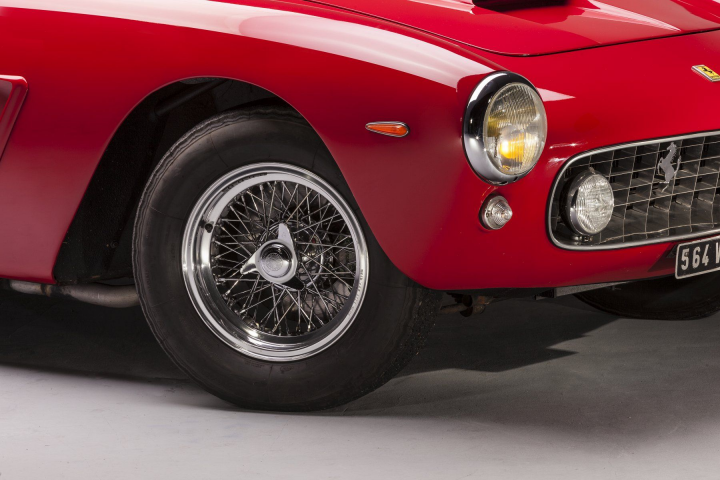 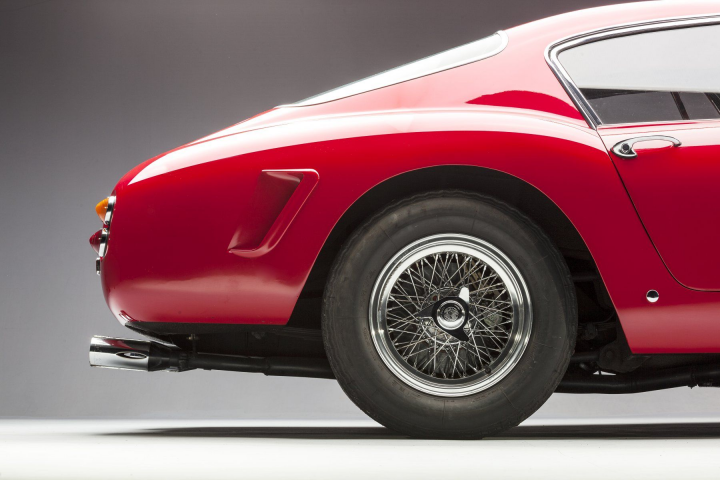 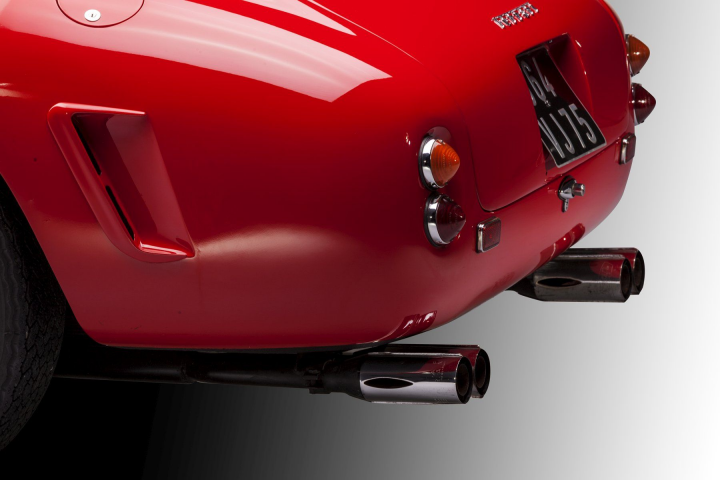 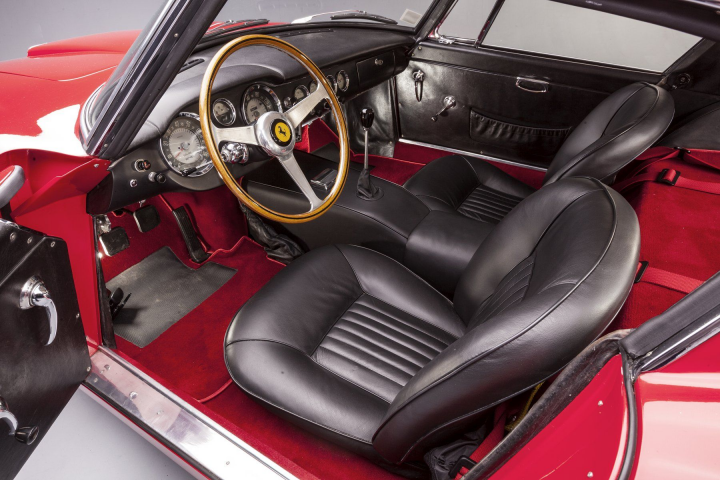 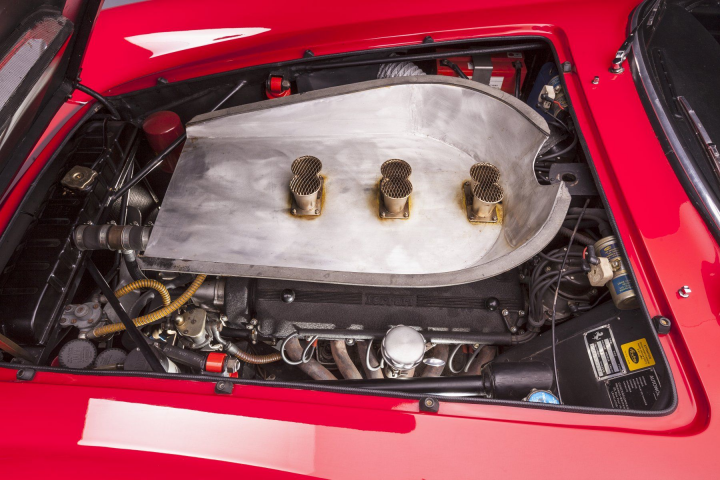 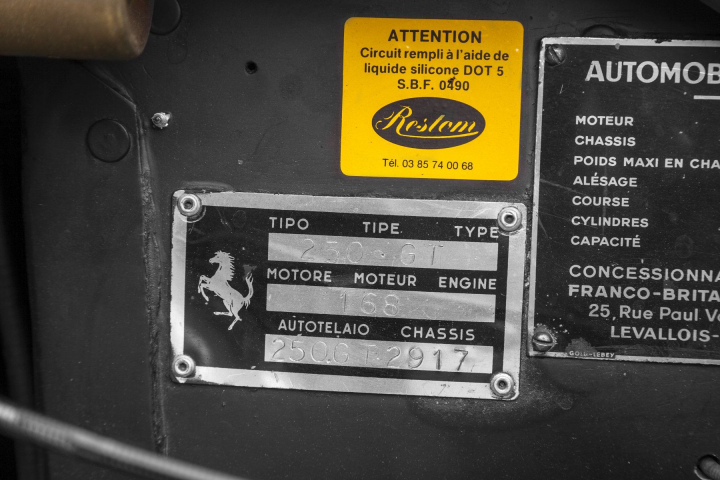