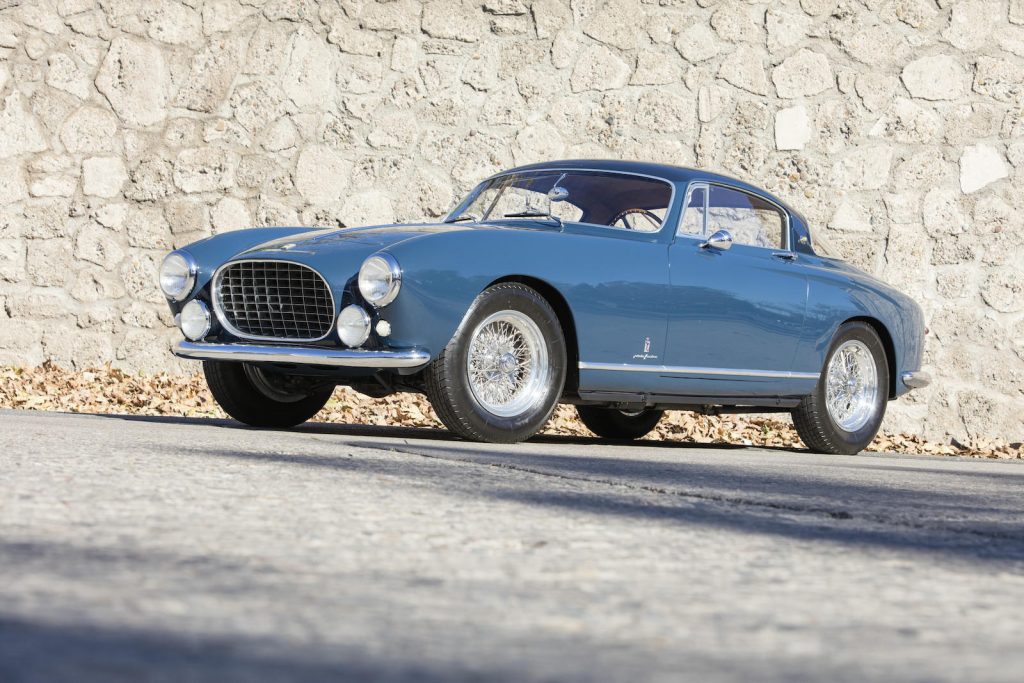 As one of just two Europa GT examples bodied with lightweight aluminum alloy coachwork, chassis no. 0389 GT claims an unusual degree of rarity. Also prepared with competition specifications generally unseen in the model, this car has been associated with some of the most respected names in the Ferrari niche.

According to a note typewritten on 0389 GT’s factory build sheets; “Per MM/55”, the car was originally prepared for the Mille Miglia, but it ultimately never ran the race, as it was not completed at Ferrari’s workshops in time for the start. The unusual build specifications combined elements of two different chassis types, the Type 508, which was the first of the ever-evolving 250 GT chassis, and the Type 513, which was only otherwise used on four 250 GT Speciale examples that were bodied in Super America-style coachwork. The chassis frame tubes and cross members of 0389 GT were laid out quite differently compared to the standard Europa GT chassis, and features a wider track front and rear, providing the car superior handling for road racing. The brakes fitted to 0389 GT were identical to the ones fitted to the 375 MM Spider and Berlinetta sports racing cars, offering the best available stopping power for the already light GT. The Type 112 motor no. 0389 GT (internal no. 333) was installed and tuned for competition, weight being kept to a minimum using a Type 102 magnesium gearbox casing, again similar to the componentry fitted on the 375 MM. The beautiful lightweight body was executed to the builder’s handsome Europa GT Coupe design, and was configured with left hand drive steering, featuring an adjustable steering column. Clearly, 0389 GT was built for a specific purpose and was a very special automobile from its inception, even by Ferrari standards.

Finished in Blu Fiat 8V and upholstered with Plastico Naturale, much as it appears today, 0389 GT was issued a certificate of origin on March 18, 1955, and on April 27 the car was officially sold to the Industrie Lampade Elettriche in Vicenza, Italy, on behalf of Luciano Cascalli. The car remained in the Rome area over the next few years before being purchased by the well-known Ferrari collector Edwin Niles of Los Angeles, California, in March 1960. Mr. Niles imported the car to the United States, and soon thereafter sold it to a local Los Angeles dentist named Robert H. Peterson, who retained the legendary Max Balchowsky (builder of the famed Old Yeller road-race specials) to install a Corvette transmission and rear axle after a clutch failure, though the original Ferrari V12 engine was retained.