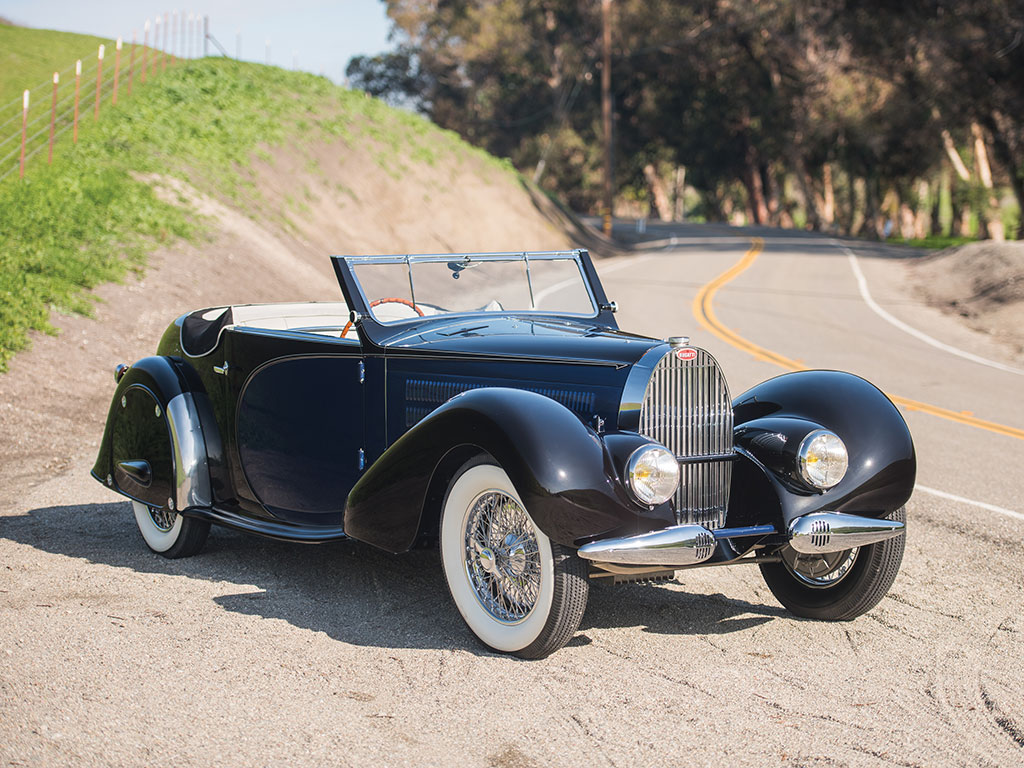 In the world of East Coast automobile collecting, especially in Florida, few people stood as tall for as long as the late Alexander E. Ulmann. His name is, of course, synonymous with Sebring, the first American automotive endurance race, which he established in December 1950, as well as with early efforts to establish the U.S. Grand Prix. However, his efforts in early U.S. automobile enthusiasm were not strictly limited to being a track-day impresario. Raised around Russia’s hydroelectric power plants and possessor of a Masters from MIT under Dean Fales, his business success in the burgeoning aeronautic and aerospace industries funded collecting that was as diverse as his life. Mercedes of 1908 and 1914 occupied the Ulmann garage, as did the famed marque Hispano-Suiza; but of his many automotive passions, few were as warm or as long-lasting as that for his Bugatti Type 57, chassis number 57406.

According to Bugatti historian Kees Jansen, Ulmann’s Type 57 was built in April 1936; its body was, and remains, a four-passenger Stelvio, the attractive Jean Bugatti–designed cabriolet with its distinctive pontoon fenders and Atalante-like rounded tail. Typical of Bugatti, the Stelvio’s design evolved during Type 57 production. In 1935–36, the Stelvio sported a folding windshield and a top that would fold nearly flat and out-of-sight into a “cut-out” provided for it at the rear of the body. The result was streamlined, attractive, and sporting. It was an automobile that just seemed to have been designed to show off. Bugatti agreed, and sent chassis 57406 to the Nantes Fair, an international trade exhibition for everything from farm equipment to sports cars, which still exists today. On August 8, 1936, the car was sold to its original owner, R. Petit.

Subsequently, the car made its way into the ownership of a Mr. Ferrand, by which time it had been upgraded with the later-style headlamps, integrated into the front fenders, as well as spats over the rear wheels. Period photographs from the 1940s, which are on file, show the car already fitted with these features, which in their design and construction seem very professional and true to later 1937–39 Bugattis. In addition, the car was also fitted with the front “moustache” bumpers, as well as Lockheed hydraulic brakes, which were a common upgrade to earlier cable-brake cars. All of this indicates that these modifications were either done by the factory or by a Bugatti agent.

The Bugatti was sold by Mr. Ferrand to Jacques Dufilho, then a well-known actor living in the Latin Quarter of Paris. Additional very charming photographs on file depict the car during Mr. Dufilho’s long-term ownership, with members of his family obviously enjoying its good company. It was this last French owner who would sell the car, in 1974, to Alec Ulmann, in whose collection it would be maintained for the rest of the great sportsman’s life. He drove the car without the rear fender spats and refinished in light blue and black, as shown in a photograph taken in New York early in his ownership.

The American Bugatti Registers by Andy Rheault and Sandy Leith note continued ownership by Mr. Ulmann until his passing in 1986. The Bugatti was retained by his widow, Mary, for two years and then was sold to a prominent collection on the West Coast. The car was then restored to its present appearance, updating its Ulmann two-tone royal blue and black “sweep panel” livery while fitting pale grey leather upholstery as a breathtaking contrast and reinstalling the “spats” on the rear wheels. The wire wheels were chromed, as had been available from Bugatti in 1937.