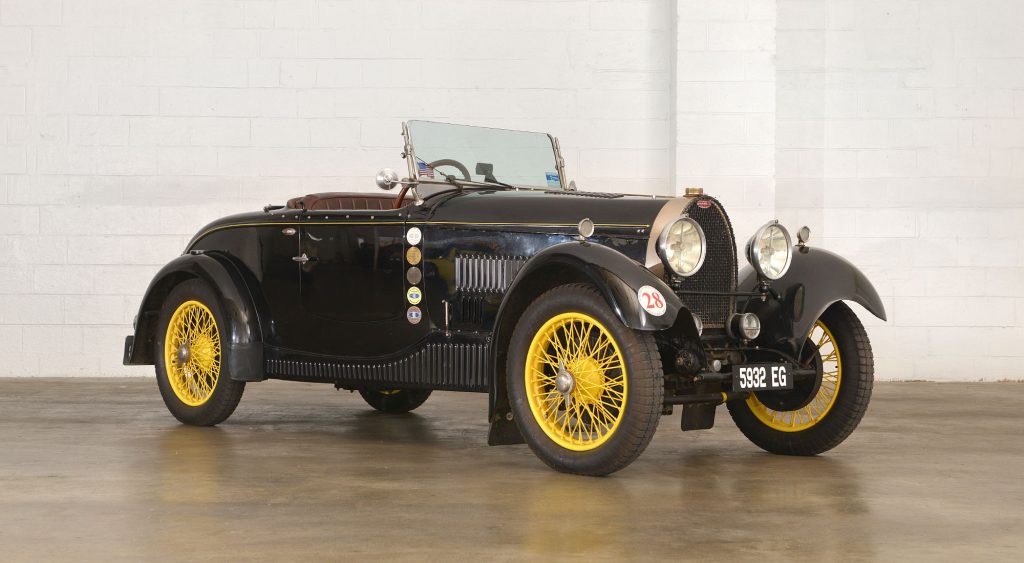 Noted Bugatti historian, Pierre Lougier, has investigated the history of our subject car, and a great deal of information has been uncovered. This Bugatti Type 40 was produced in late 1929, and in January, 1930 was delivered to its first owner, a Frenchman named Pierre de Brou de Lauriere. At the request of its new owner, the factory did not initially complete the car with a catalogue body. Instead, this Type 40 was fitted at the factory with a rudimentary body more appropriate to a commercial vehicle, with an emphasis on carrying capacity.

In March of 1930, Pierre de Brou and his wife ran their new Bugatti in the Rallye d’Algers in North Africa, an event whose purpose was to commemorate the long friendship between Algeria and France. However, successfully finishing this event was only the start of a journey that took over a month to complete. After the rally, and in company with three other Type 40 Bugattis, de Brou and his wife proceeded to leave Algeria and drive their Type 40 across the Sahara Desert. Lieutenant Frederic Loiseau, who had made a similar crossing of the Sahara in a Type 40 Bugatti in 1929, drove the lead car in this Bugatti Expedition. Loiseau arranged for most of the infrastructure, such as food, fuel, and spare tires, needed to complete the journey. Not only did all four cars complete the crossing, but, after doing so, they all then returned to their original starting point by again crossing the Sahara in the opposite direction. This was an amazing testament to the capabilities of the cars and the participants and generated an enormous amount of publicity for the factory.

Sometime after returning to France, de Brou drove his Type 40 back to the factory and exchanged it for a new and larger Type 44. After this, the Type 40 Bugatti on offer here had its original Sahara body removed. That body was replaced with the splendid Roadster body it has to this day. However the exact origin of the new body is not known; it is in the style used on the Bugatti Types 40A and the 43A, and it may have been a prototype body by Jean Bugatti. Both Ettore and Jean Bugatti were fond of US automobiles, and this roadster style was initially a popular American design.