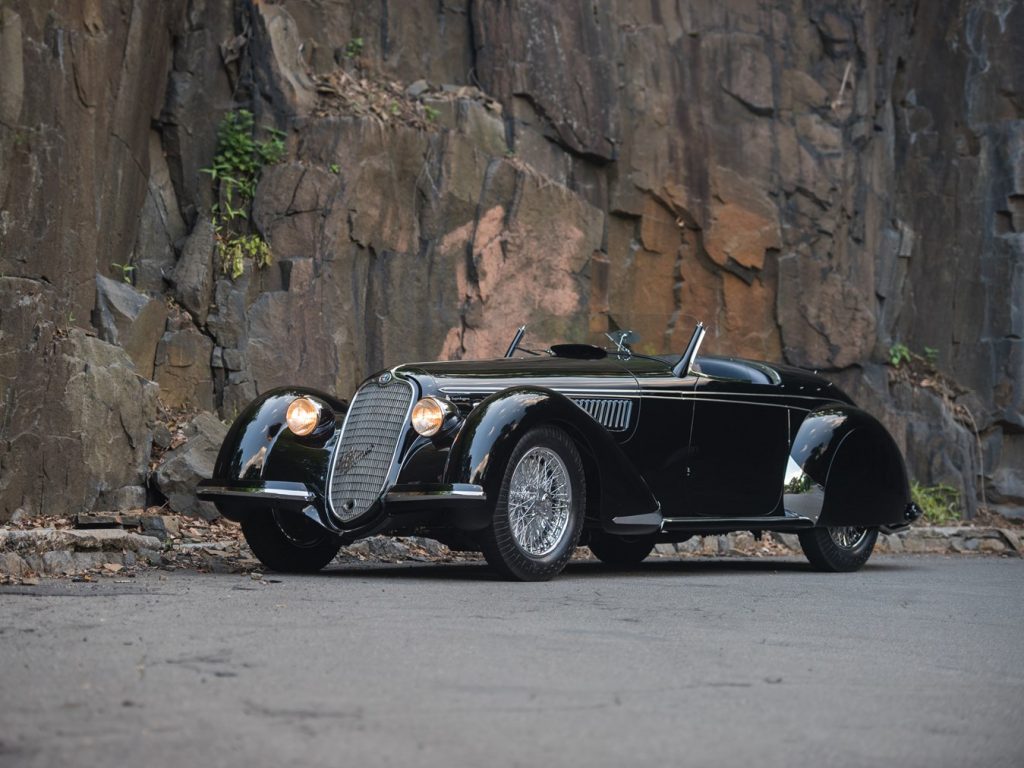 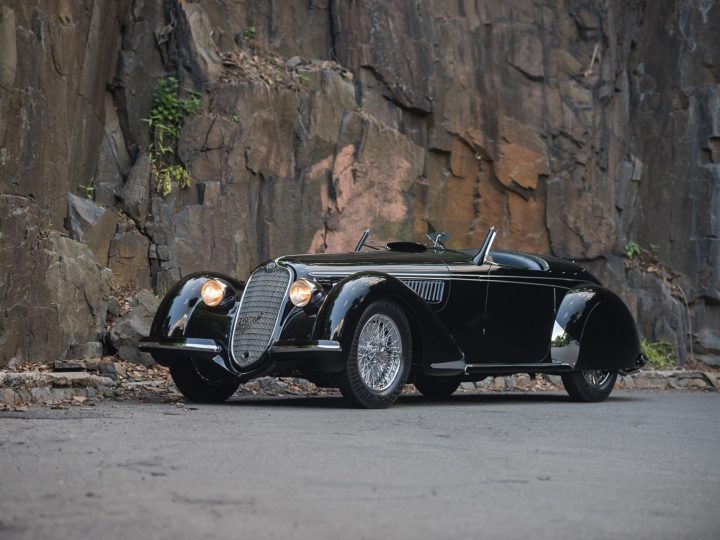 Moore’s latest research indicates that the known history of this car starts in 1949. According to the Brazilian newspaper Folha da Manha (now Folha de Sao Paulo) for 15 February 1949, an amateur driver in Sao Paulo called Mario Tavares Leite imported an 8C 2900B to Brazil from Italy. The poor photo in that paper shows the front of a Touring Spider. He raced his new acquisition at Interlagos, in the sports car class, and won a race there, on 31 July 1949. He won again at the II Premio Cronica Esportiva Paulista meeting at Interlagos on 30 April 1950, after which the car disappeared. In an article on Brazilian racer Camillo Christofaro in a now-defunct Brazilian magazine, Motor, for 3 September 1986, he states: “Em 1958 Camillo pegou um Alfa Romeo de passeio, encurtou o chassi e fez um carro grand prix, equipou com motor Corvette (…)” or, roughly translated, that Camillo took an Alfa Romeo touring car, shortened its chassis, put a Corvette engine in it, and made a racing car. It seems probable, therefore, that this was the single-seater Mecanica Nacional car raced by Christofaro after he had bought both a Tipo 308 and the 8C 2900B from his uncle, Chico Landi. The chassis was part of a hoard of parts that came from Brazil in late 1972, which was acquired by David Llewelyn. 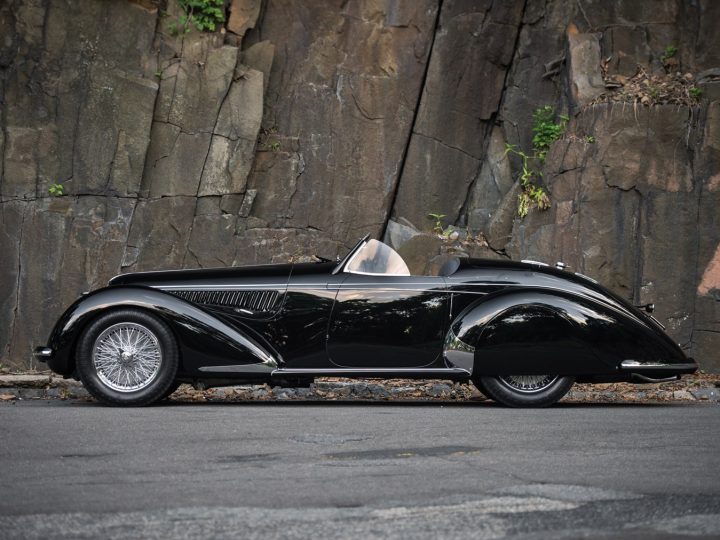 Meanwhile, in Argentina, another long chassis 8C 2900B, also with Touring Spider coachwork, was acquired by Carlos Menditeguy of Argentina. In 1953, the car was sold to a Buenos Aires racer, German Pesce, and his partner Iantorno. The two men modified the car by removing the body and installing cycle-fendered racing coachwork, and the complete original body was set aside save for the radiator grille and surround, which were incorporated into the new racing body. 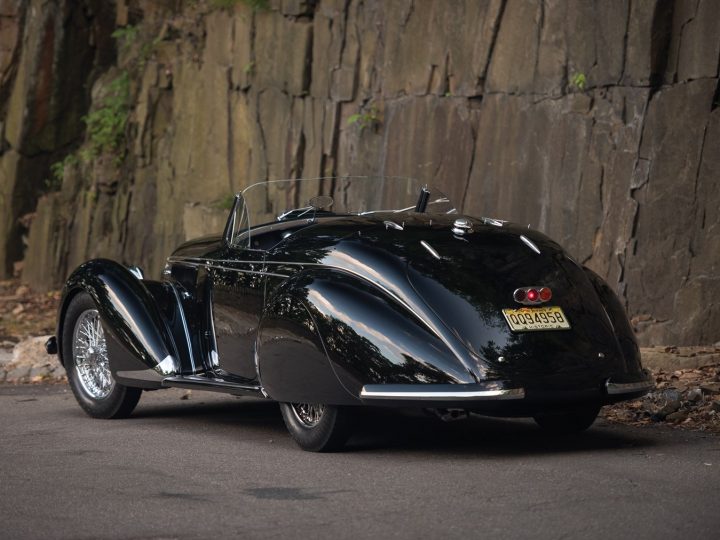 The complete original Touring coachwork was sold to Juan Giacchio, owner of a body shop in the Buenos Aires suburb of Palermo. Giacchio retained the body until his passing in 1986, and at that time it was offered by his widow to Ed Jurist of the Vintage Car Store. Hector Mendizabal, the well-known Argentinean broker of the period, confirmed that it was from an 8C 2900B Lungo chassis, Touring body number 2027, the color a light silver blue with red leather—and it was missing the grille. Correspondence from both individuals during that period indicated an association with chassis 412041. 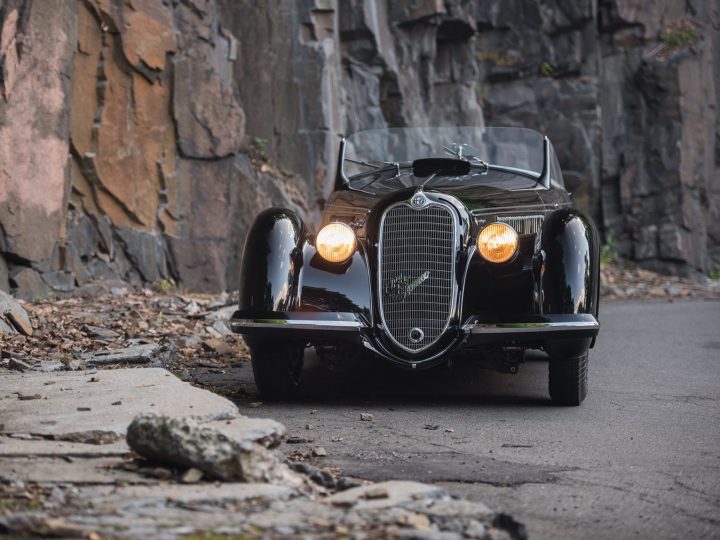 During this same period, as often happens, pieces of a puzzle began to fall together elsewhere. In 1983, David Black acquired the modified 8C 2900 rolling chassis, which was still complete with authentic 8C 2900 suspension and transaxle, from David Llewellyn; the frame had its engine bearers (and thus the chassis number) cut away to accommodate the Corvette V-8, although a correct frame number, 432042, in the proper Alfa Romeo typeface, was still present. Moore recalls in The Immortal 2.9 his recollection of seeing the frame a decade earlier in 1973: “I was completely convinced that this was a genuine Alfa Romeo frame.”
Following Black’s death, the car passed to Jan Bruijn in 1993. Guido Haschke of Switzerland subsequently acquired the rolling chassis and, at the same time, acquired the original, remarkably well-preserved Touring Spider body from Italian collector Count Vittorio Zanon di Valgiurata. The body, in the same light silver blue and missing its radiator grille and surround, was without doubt the Menditeguy Touring Spider, body number 2027, which is pictured in Moore’s book, while still in Buenos Aires. 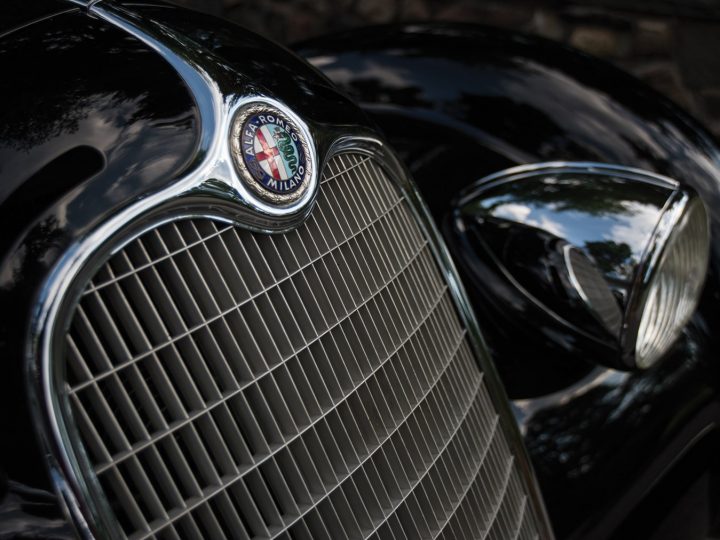 The following year, 1994, Sam Mann was alerted to the availability of the project and contacted Alfa Romeo restorer Tony Merrick, a gentleman who carries the same prestige in 2.9 restorations as Simon Moore does in documenting their past, to inspect the car and advise as to its authenticity. Merrick, who has had 10 to 12 of these fabled cars through his workshop, found the components to be authentic, and with his advice, Sam opted to purchase the car and engage Merrick to perform the restoration. Through the sleuthing of Moore and Merrick, a complete original 8C 2900B engine, number 422042, was acquired, thus securing the last of the necessary components for a proper and authentic restoration.
It is a reality understood by those in racing circles that these high-performance Alfa Romeos and many other similar cars were simply tools used on a track, and such is the nature of competition racing that as technology and rules evolved, so did the cars, which often led multiple lives. That these truly rare components from a model with such a miniscule production run survived to be united by a dedicated enthusiast is nothing short of remarkable. It is worthy of note that during the subsequent restoration, the original body number, 2027, was located on numerous panels. Interestingly, 2026 appears on the glove box door, indicating that the two sequential bodies were being built at the same time, and someone put the wrong glove box door in this car! 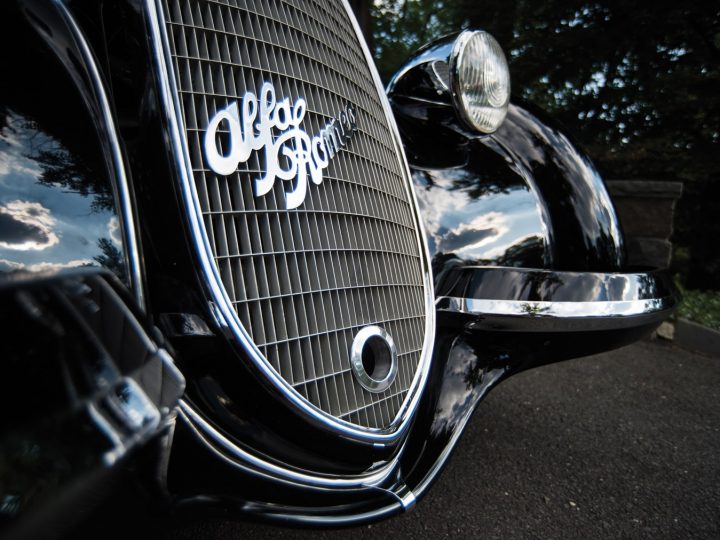 During the restoration, when Merrick placed the body on the re-lengthened chassis, he found that the holes on the top of the frame lined up exactly with the holes in the inner fender liner panels. According to Merrick, who has fully disassembled at least six of these cars, the holes were not made to a drawing or template but were drilled freehand by the Touring workmen during assembly so that a series of screws would hold it all together. This construction method would have created a unique “fingerprint,” thus indicating that the body could have somehow been original to this chassis. Merrick recently confirmed he still holds this belief, given his understanding of the construction of these cars on a more forensic level.
To summarize, since no hard evidence exists to confirm the true sequence of events, it remains possible that the Menditeguy Alfa traveled to Brazil from Argentina in the mid- to late-1950s, sans Touring body, where it was then further modified and raced with the Chevrolet V-8, only to be reunited with its original Touring coachwork some four decades later. 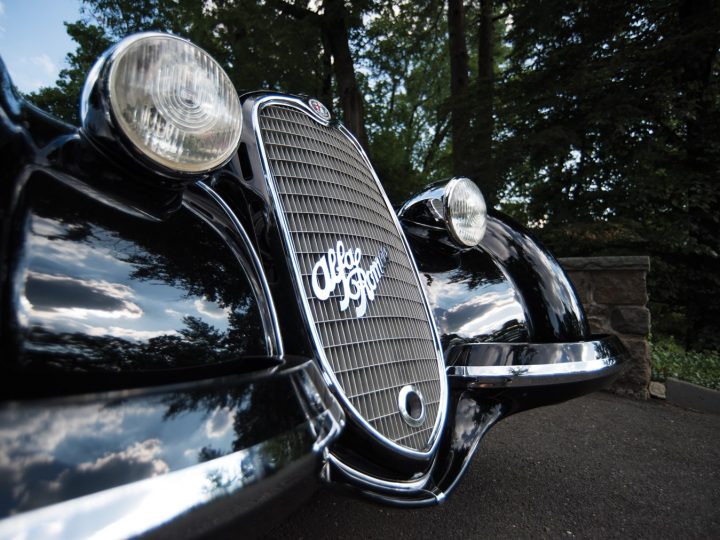 Mr. Merrick had completed the restoration of the chassis, drivetrain, and body by late 1997, with the exception of paintwork, which was performed – in its current lustrous black – upon arrival back in the United States. At that time, Sam opted to add the chromed stone guards on the rear fenders, and the flashing on the rear of the front fenders, authentic design elements which he had admired on another 2.9 Touring Spider. The car was subsequently debuted at the 1999 Pebble Beach Concours d’Elegance, where it was awarded 2nd in Class and the Gwenn Graham Trophy for Most Elegant Convertible. More recently, this year it was deemed the Most Elegant Car at the Cavallino Classic Sports Sunday at the Mar-a-Lago Club.
Since joining the Mann’s stateside stable, noted twin cam specialist Phil Reilly has handled all maintenance, repair, and tuning work. Most recently, Sam has been able to acquire the rare and valuable fuel pumps specific to the 8C 2900, which will be included with the sale for installation by the next owner. Perhaps the most persuasive testament to the quality of the restoration and its subsequent expert care, and the effortless drivability of the 8C 2900, is the fact that the Manns have spent over 12,000 miles behind the wheel, including seven 8C Alfa Tours between 1999 and 2013, in addition to the Copperstate 1000, the Colorado Grand, the California Mille, and the California Classic Rally. 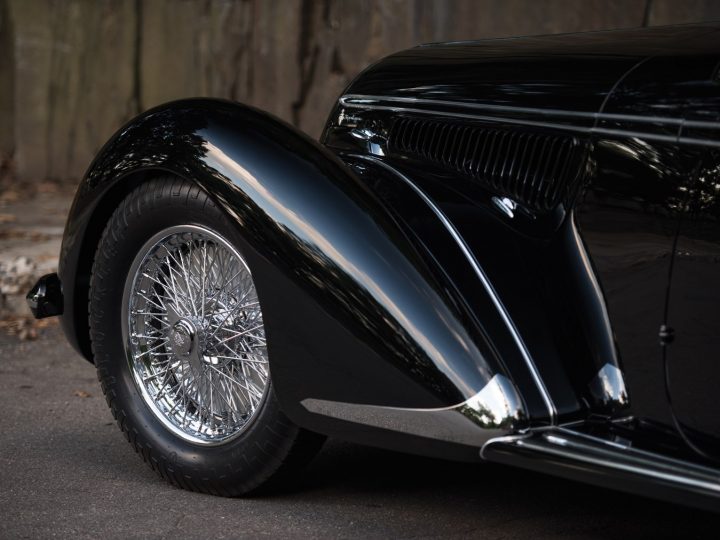 Only approximately 32 2.9 chassis were made; the survivors are the most sought-after European sports cars of their generation, none more so than those bodied by Touring. Of the extant examples of the 8C 2900, it is believed that only 12 are Touring Spiders, seven of which are on the long chassis. They can be justifiably referred to as “Italy’s version of the Bugatti Atlantic,” as, like the Bugatti Type 57SC of fame, they combined the best engineering and styling of their generation in one advanced, sensuous, undeniably thrilling package. 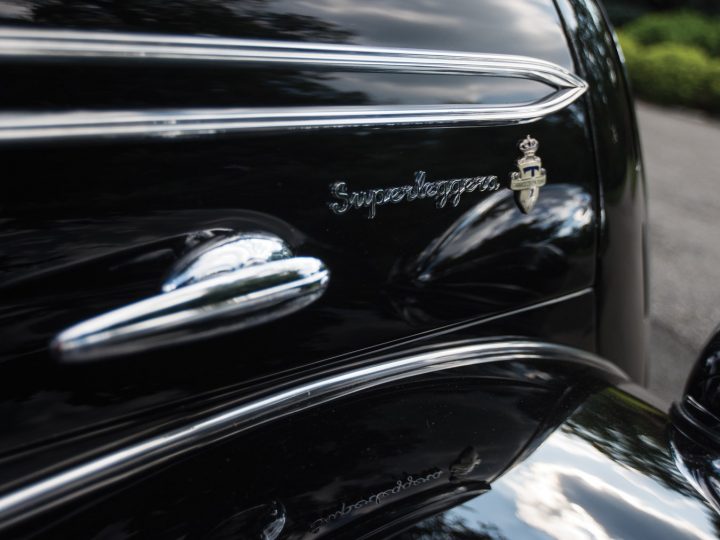 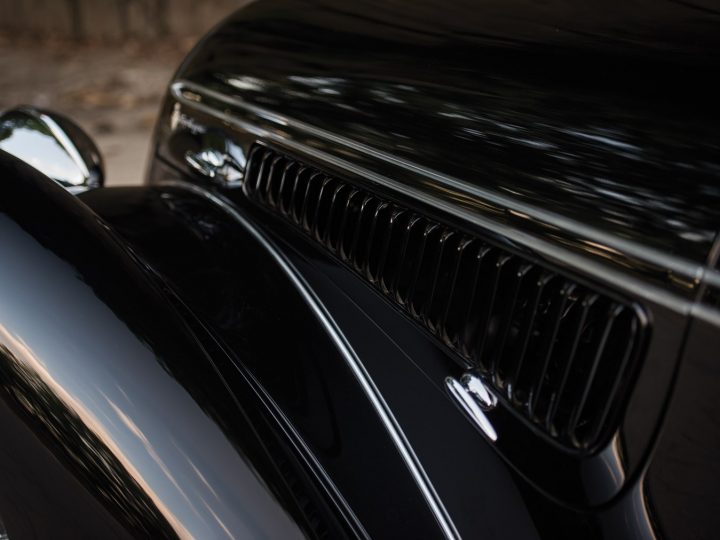 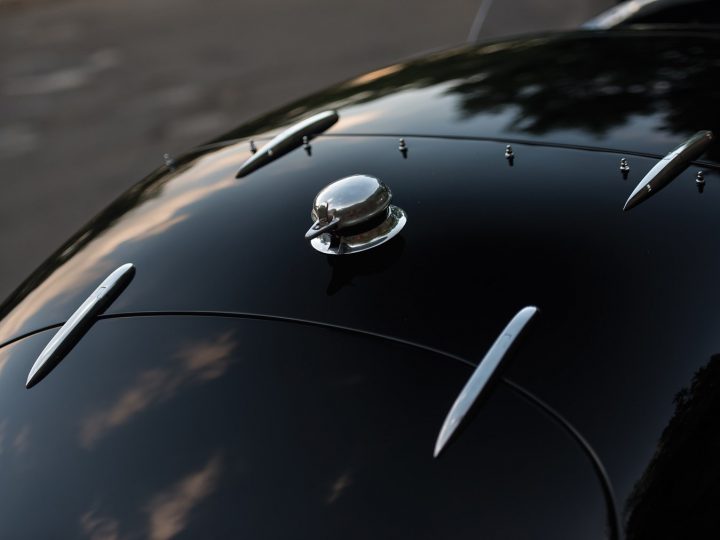 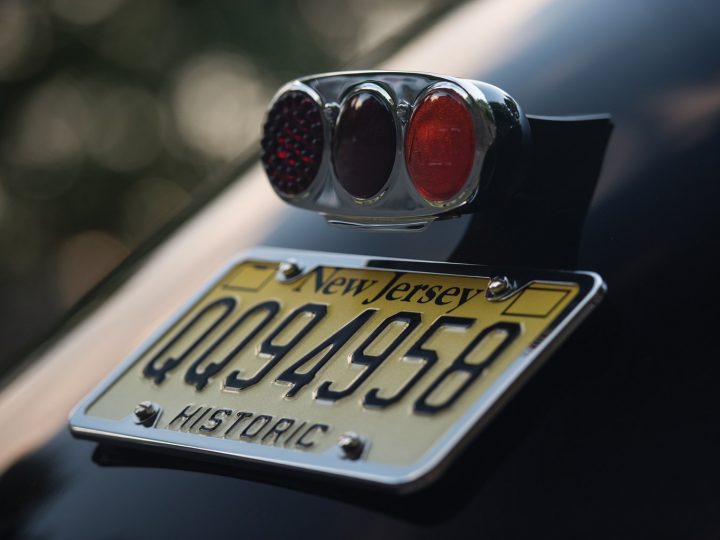 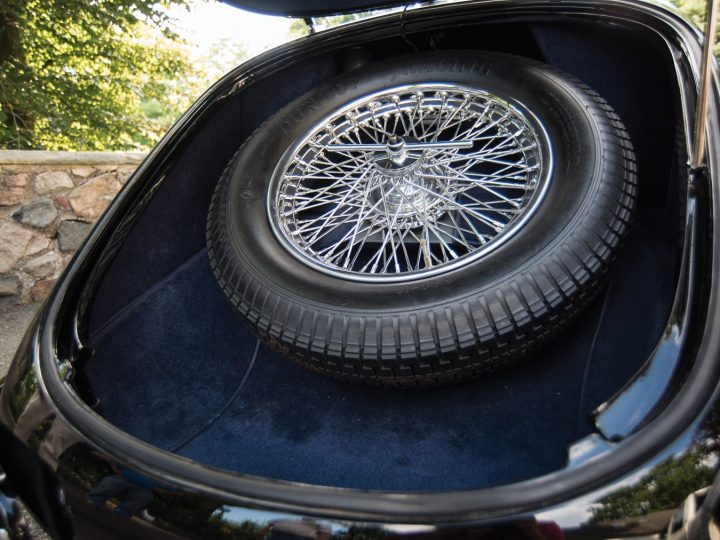 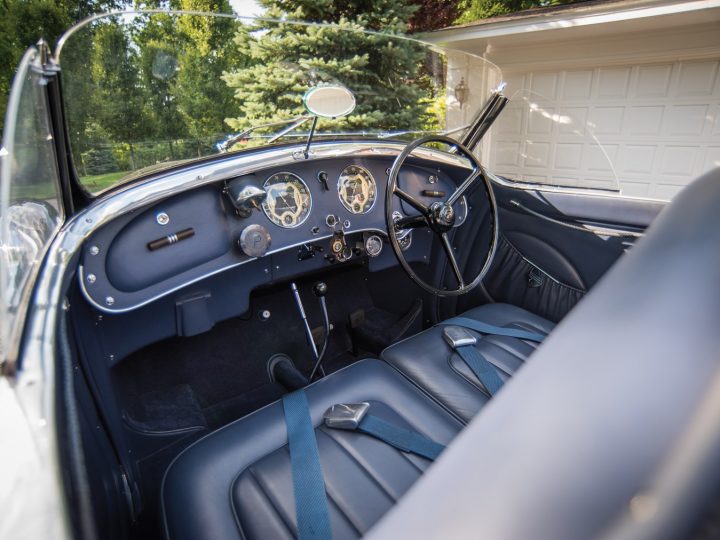 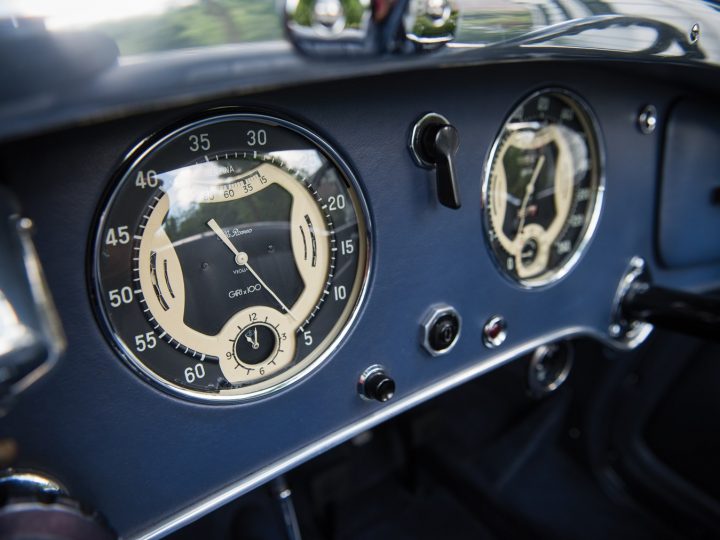 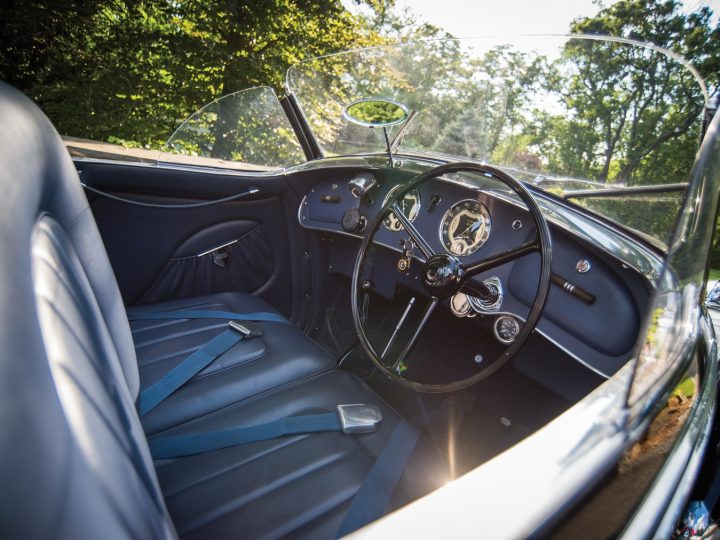 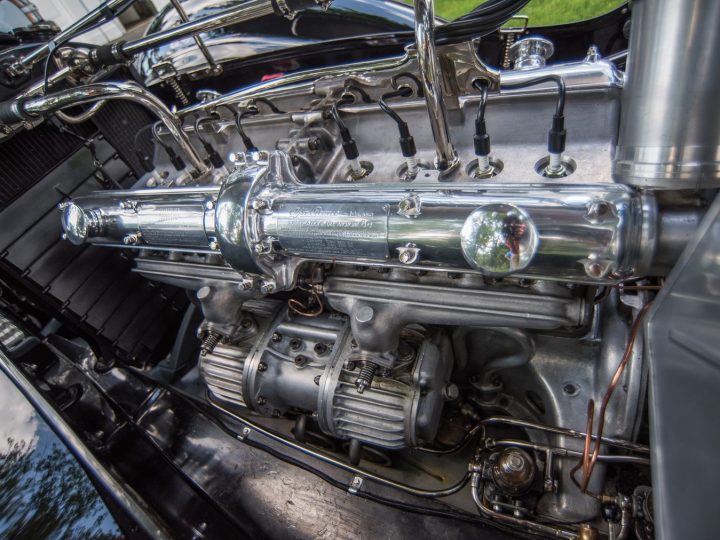 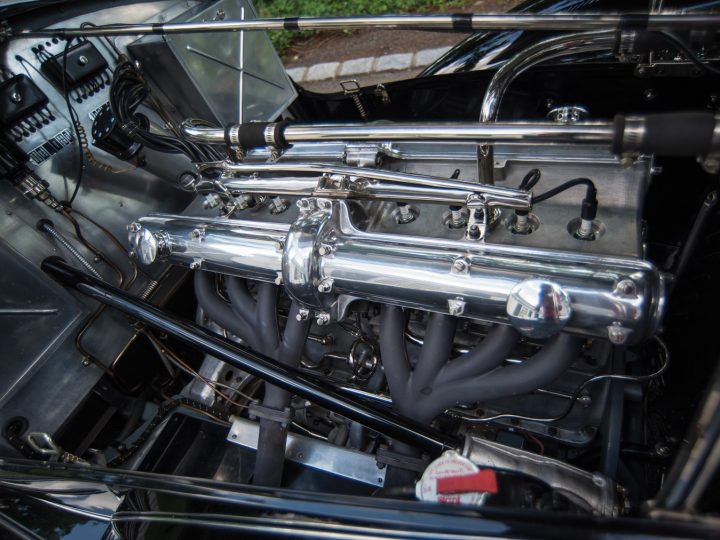 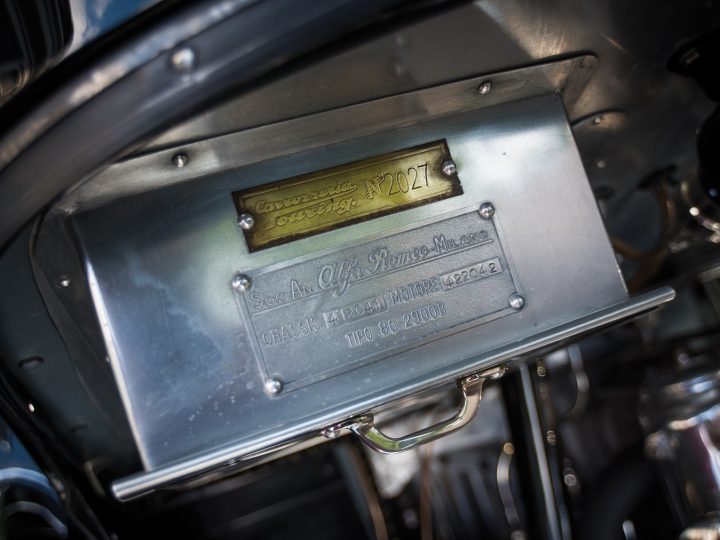 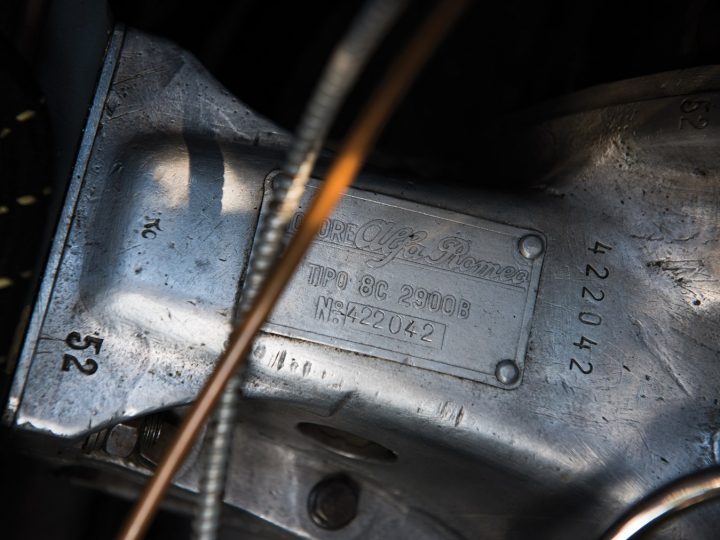