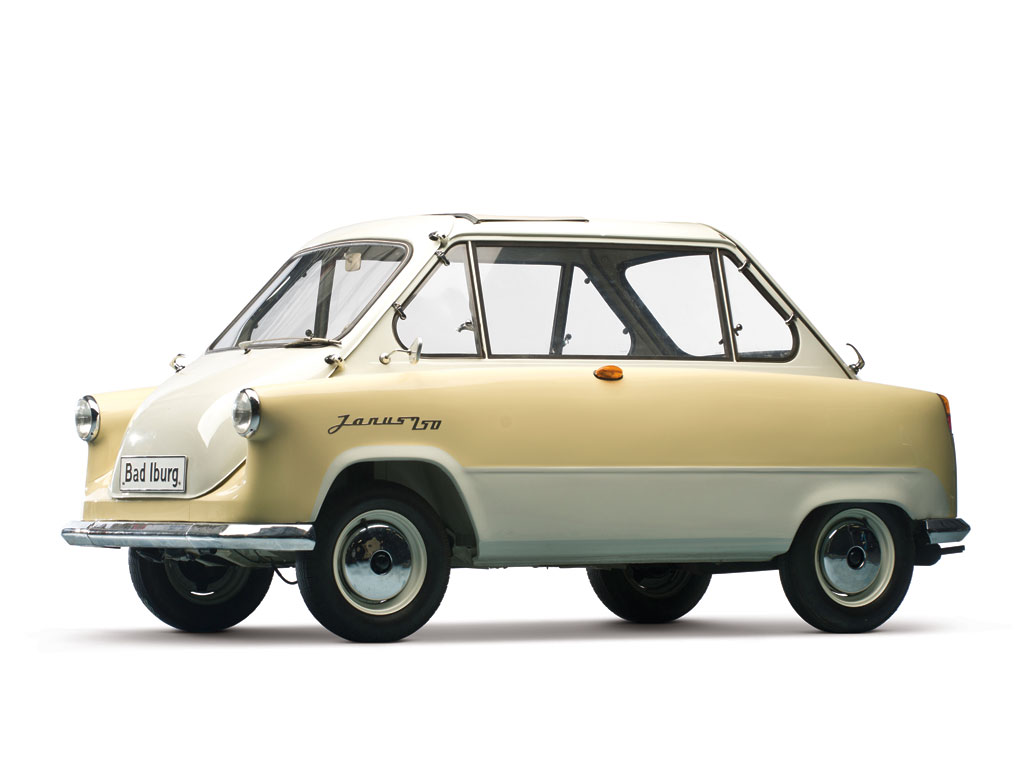 In the first decade after WWII, the long established firm of Zundapp in Nurnberg offered a large palette of two wheelers ranging from motor-assisted bicycles to heavy motorcycles. In late 1954 it became shockingly evident that the recovering population was ready for more refined weatherproof vehicles, and the entire motorcycle industry was in a tailspin.
Zundapp realized wisely that they could not afford a lengthy development process, and would look at outside help. The efforts of Kroboth and Brutsch were deemed too primitive, and Fuldamobil’s lukewarm. Dornier’s front/rear-facing prototype was settled for and named Janus for the Roman god who faced both ways. It was promptly redesigned with Isetta-style doors and with the 250cc Bella scooter motor centrally located between the front/rear facing, fold-flat seats. Much attention was devoted to the advanced, very comfortable Mac Pherson strut suspension. Glass sliding side windows and robust construction contributed to an overall weight that was too much for the 14 hp motor and the first examples barely reached 80 kph. Production began in June 1957 – much too late – after yet another redesign to lighten the car by substituting Plexiglas side windows. 15,000 cars per year were necessary to break even but a mere 1731 were built in the first six months. Watching the retreating landscape from rear-facing seats in the rain was not as thrilling to customers as first thought. By summer 1958 it was obvious that the situation was not viable and the factory was sold to Bosch. Few examples remain.