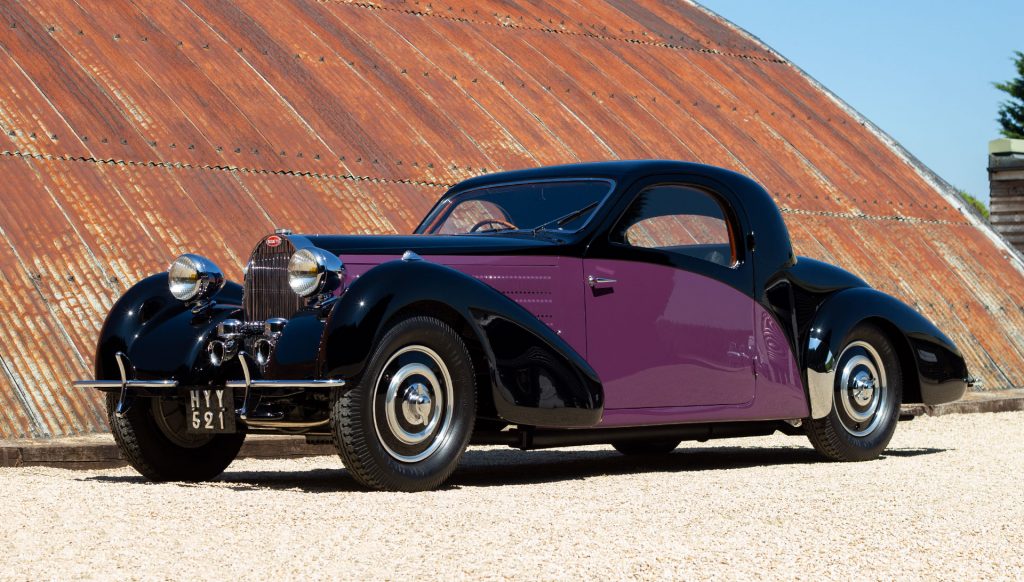 Courtesy of The Classic Motor Hub

The Bugatti Type 57 presented at The Classic Motor Hub is one of the beautiful Atalante 2 seat Coupés. As a late car it has the stronger rear axle, the cross braced chassis and rubber engine mounts. It is also fitted with the Lockheed hydraulic brakes.

An extract on file from the original order book shows chassis #57633 being ordered in February 1938 by wealthy industrialist Fernand Crouzet of Bastide-Rouairoux outside Toulouse. Already the owner of a Bugatti Type 57 (#57403) with Cabriolet coachwork by Gangloff, Monsieur Crouzet once again approached Gangloff and asked them to create a one-off Atalante. Unique features included long rear wings, a metal covered spare wheel mount in the boot lid, a single large rear window, special bumpers and disc wheels. The car was painted Black over Blue and original photos of the car outside the Gangloff works clearly show the two-tone paint scheme and unique features. Monsieur Crouzet would go on to own a third Type 57 (#57818), another Atalante but supercharged. It is understood that he had one car for himself and the other two for his two sons. Soon after purchasing his third Bugatti war broke out and #57633 was hidden away. Sadly, both his sons were killed during the war and on the death of his second son, Crouzet sold the car to Pierre Vidal of Toulouse.

In 1943, the car was sold once more and moved to Paris where it survived the war unscathed. After the cessation of hostilities, #57633 was taken to the Bugatti agent on Rue Carnot and refurbished before being put in to use with the Corps Diplomatic as transport for the French Embassy in London. In 1948, the Bugatti was in private hands and ended up in the ownership of a J.G.H Carter, who took the car to Bugatti specialist J. Lemon Burton to upgrade the car to a unique dual carburettor specification using Zenith carbs and a Type 101 manifold. In 1955, #57633 became the property of Kenneth Ullyett a well-respected author and marque historian. He used the car regularly and kept it until his death in 1977. His widow, not able to part with her husband’s beloved Bugatti, kept the car in ‘less than ideal storage’ until her death 10 years later, at which point it was consigned to a Sotheby’s auction in November 1987 as a barn find/restoration project. Having bought the car for £72,000 the new owner had the car sent to Hill and Vaughn for restoration, at some point during which it was sold to a Japanese collector prior to completion.

In 2003, #57633 was bought as an unfinished restoration by US property magnate and car collector, Peter Ministrelli. In a questionable colour combination of Yellow over Purple after its late 80’s restoration, Mr. Ministrelli showed it a couple of times before embarking on a body off, 2 year, 100 point restoration. No stone was left unturned to return this magnificent motor car to its original specification. Rare parts such as the Bosch Distributor, Scintilla ignition switch and a set of original Gurtner horns were sourced via collectors and specialists from all over the world including the United Kingdom, The Netherlands, New Zealand and couple of trips to Retromobile in Paris. A fellow collector and owner of another Type 57 Atalante even lent his car and parts for the restorers at Classic & Exotic to custom make new, factory correct pieces for the project. Invoices and other information on hand go into exhaustive details as to the lengths that the restorer went to in order to get this just right.

When it came to painting the car, the first intention was to go back to the original Black over Blue but as the sister car ordered new by Monsieur Crouzet still existed and was in the USA in the same colours, the decision was made to go slightly different. While the Black over Purple scheme may not be to original specification, it certainly compliments the beautiful lines of this stunning car. Concours judges obviously didn’t seem too put off by this move away from originality as the car was immediately put on the biggest concours stage in the world, the Pebble Beach Concours d’Elegance in 2005 where it was awarded Second in Class, an incredible achievement and made all the more impressive when one considers it came second to a Talbot-Lago Teardrop Coupé by Figoni et Falaschi, is there a more worthy opponent to come second to! Next came Amelia Island in 2006 where the car won Best in Class and in the same year it was the outright winner with a score of 99.5 points at the Michigan Region Grand Classic.

An extremely active and generous philanthropist, when Peter Ministrelli decided to sell his Bugatti, he consigned it, along with his Duesenberg Brunn Riviera Phaeton to the Gooding Auction at Pebble Beach in 2006 with all proceeds from both cars going to Beaumont Hospital. It was at this auction that #57633 was bought by renowned Bugatti collector, David Wooley and returned to the United Kingdom. A year later, the opportunity to buy a fabulous Type 51 came up and David decided to sell #57633 to the current owner, a well-respected collector of vintage cars. As part of the arrangement the car was taken to Gentry Restorations and thoroughly checked over and recommissioned where necessary to make sure the mechanical aspects were in as good an order as the cosmetics, which today, are still second to none and concours ready.