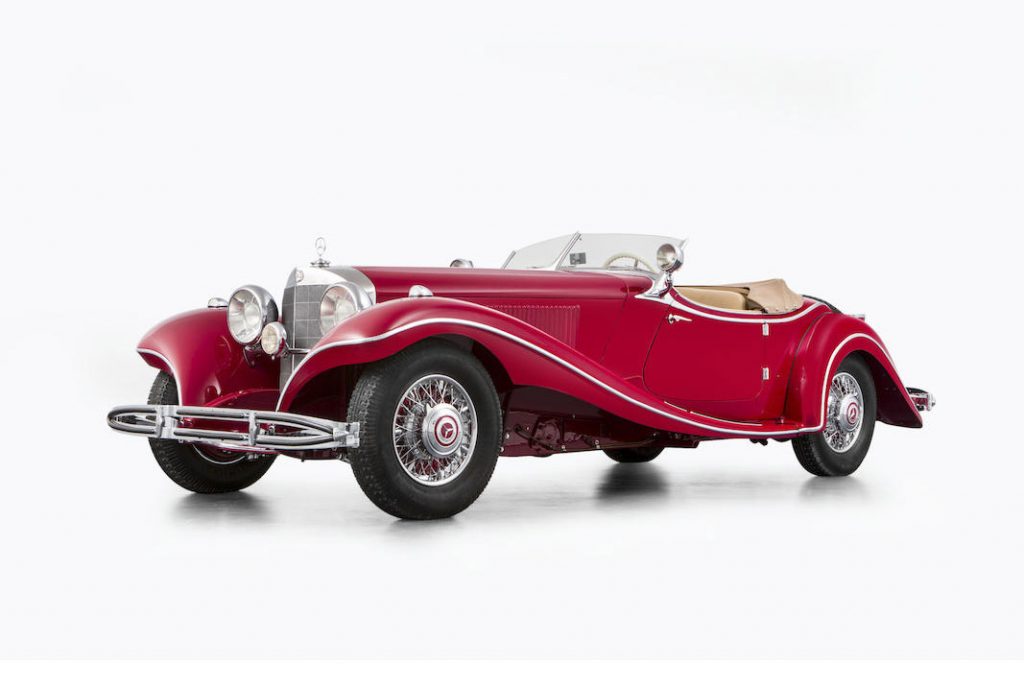 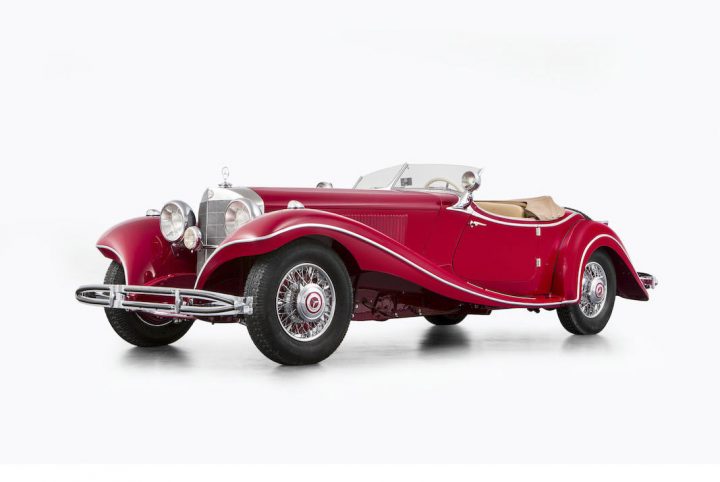 Sensation of the 1935 Berlin Auto Show, Mercedes-Benz’s legendary pre-war 500 K supercar cost a small fortune when new and today commands a king’s ransom, such is its rarity. The 1930s decade was a period of unprecedented fertility in motor car styling, of which the sublime 500 K represented the very pinnacle of excellence. Its timeless appeal endures to this day. 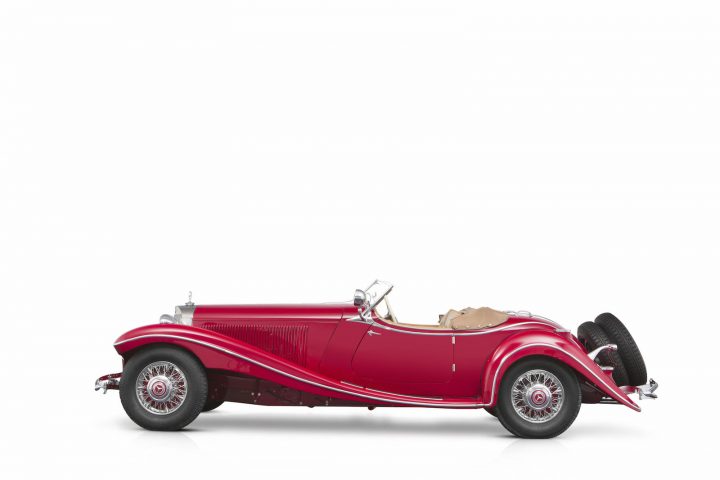 The 500 K, which boasted an ingenious swing-axle independent rear suspension layout, was created by Hans Nibel, who having started with Benz in the early years of the 20th Century, succeeded Marius Barbarou as chief engineer in 1904 and designed (and raced) the huge Benz cars of the period, culminating in the 200hp ‘Blitzen’ Benz. After the merger with Mercedes he replaced Ferdinand Porsche and created the most sophisticated chassis of their day for road and track, including the first of the ‘Silver Arrow’ racers. The supercharged road-going Mercedes of the 1930s are a wonderful tribute to his engineering skills. 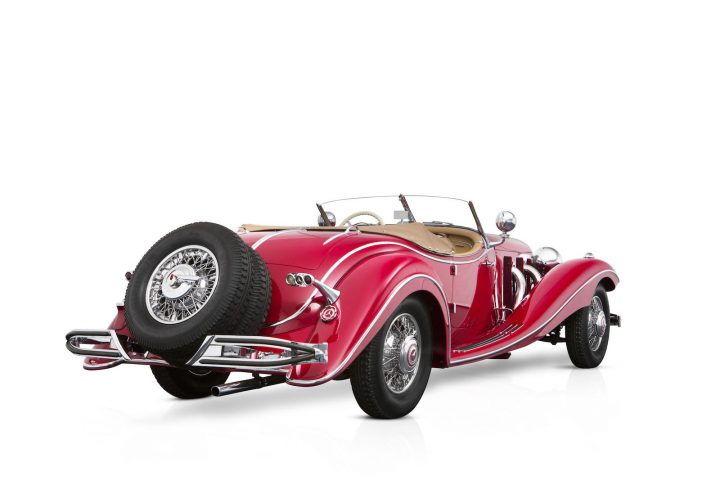 The 500 K’s immediate forerunner was the 380. Introduced at the 1933 Berlin Auto Show, the 380 K was powered by a 3.8-litre supercharged straight eight and took its place at the head of Mercedes-Benz’s model range alongside the ageing SS. Developed and refined on the earlier S series, Mercedes-Benz’s forced induction technology enabled the driver to engage the supercharger for short bursts of enhanced acceleration. 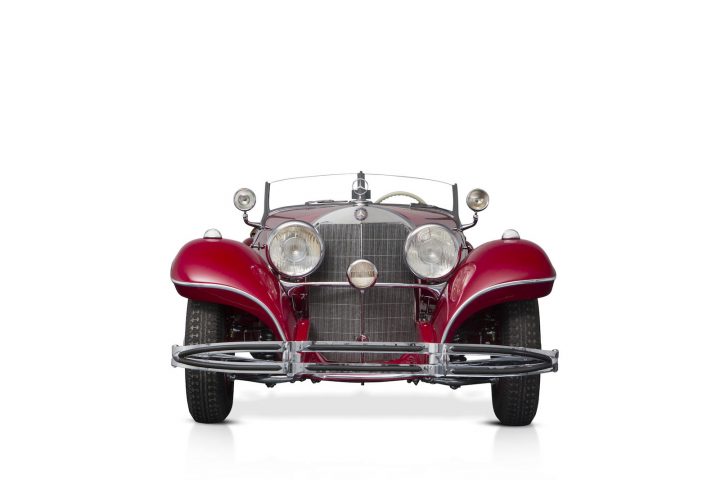 There were also strong visual links to the S series in the form of the massive V-shaped radiator, set well back on the chassis, and imposing Bosch headlights. With its all-round independent suspension and four-wheel hydraulic brakes, the chassis represented the very best of modern automotive technology, endowing the 380 with class-leading ride, handling, and braking. These characteristics, coupled with the effortless power of the blown straight eight, made the 380 ideally suited to exploit the extensive Autobahn network then under construction in Germany. 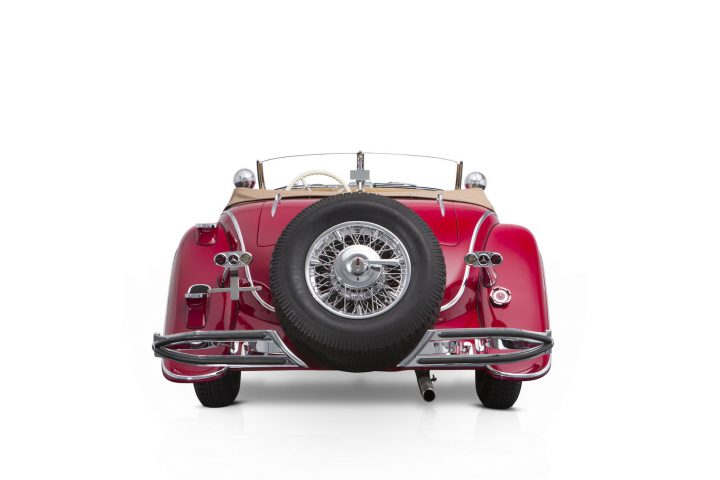 Whereas in the past such exclusive and expensive cars would have been chauffeur driven, the 380 was designed with the enthusiastic and mechanically knowledgeable owner/driver in mind, reflecting the changing social and economic conditions of the 1930s. Its many technological advances notwithstanding, the 380 was deemed insufficiently powerful to provide the required level of performance when called upon to carry large enclosed-limousine bodies, although these were now the exception rather than the norm. Mercedes-Benz lost no time in developing its successor: the 500 K. 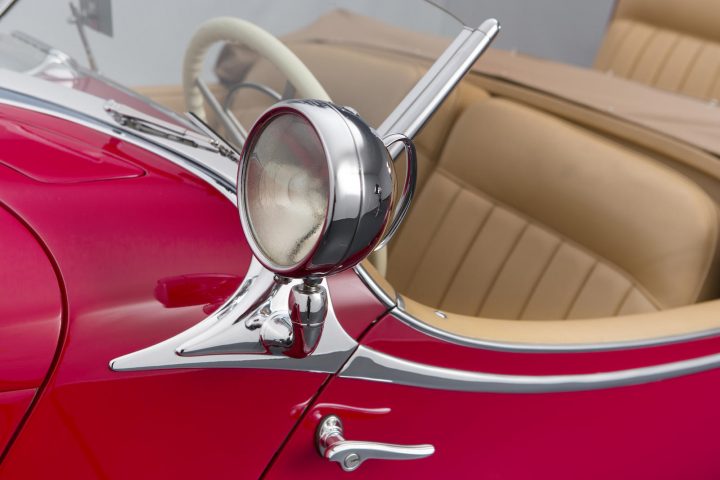 Together with the succeeding 540 K, the magnificent Mercedes-Benz 500 K was arguably the most noteworthy production model offered by the Stuttgart firm during the 1930s. Introduced at the Berlin Auto Show, a mere 13 months after the 380’s arrival, the 500 K was powered by a 5,018cc overhead-valve straight-eight engine that featured the company’s famous Roots-type supercharger system in which pressing the accelerator pedal to the end of its travel would simultaneously engage the compressor and close off the alternative atmospheric intake to the carburettor. This system had been thoroughly proven on the preceding series of Dr. Porsche-conceived S-Type cars, and in effect the 500/540 K was the last supercharged production Mercedes until relatively recent times. The 380 continued in production but by the end of 1934 had gone, leaving the 500 K unchallenged at the top of the Mercedes-Benz range. 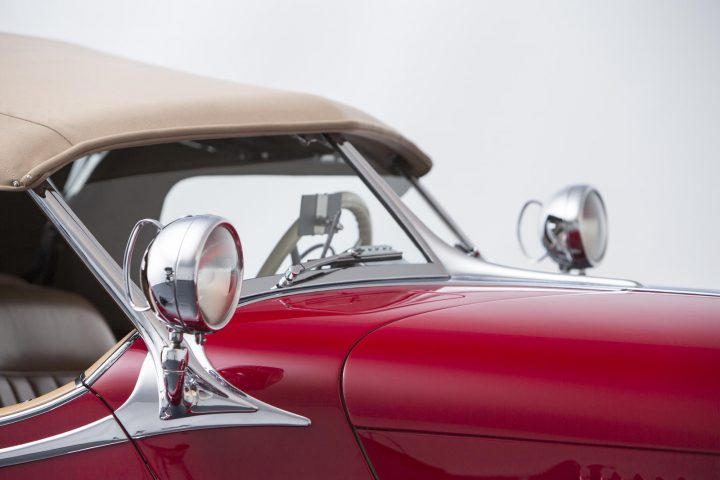 Beneath its impressing bonnet, the 500 K’s eight-cylinder pushrod engine developed 100bhp un-supercharged or 160bhp at 3,400rpm with the compressor engaged. Cast as one in steel, the combined crankcase/cylinder block was topped by a cast-iron head, while the oil supply was contained within an aluminium sump. The gearbox was a four-speeder with direct (1:1) 3rd gear and overdrive top ratio, the latter engaged via a pre-selector mechanism. 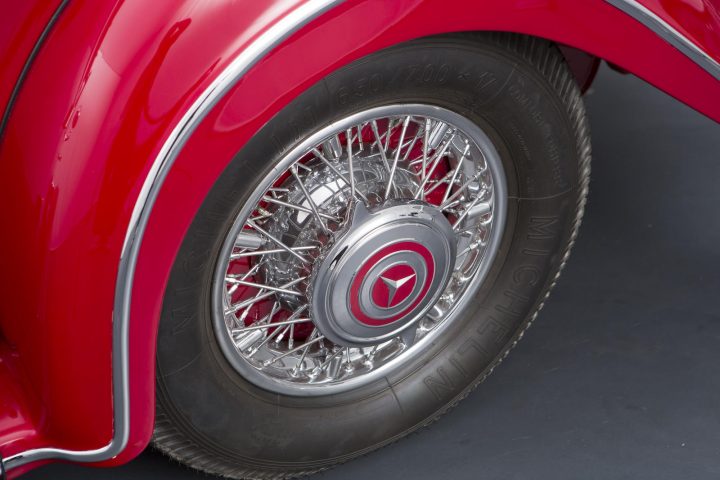 With the supercharger engaged via its multi-plate clutch, the 500 K had a top speed approaching 177km/h (110mph), which was matched by servo-assisted hydraulic braking. Its performance potential was such that Mercedes-Benz in the UK retained the Italian racing driver Goffredo ‘Freddy’ Zehender as technical adviser and demonstration driver, since the supercharged Mercedes was one of the few genuine 100mph road cars available in the 1930s. After testing an open-top 500 K in 1936, The Autocar declared: ‘This is a master car, for the very few. The sheer insolence of its great power affords an experience on its own.’ 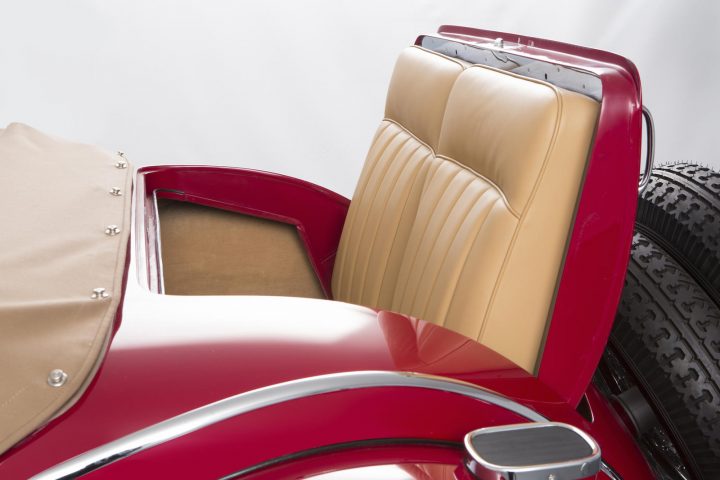 Although the 500K/540 K chassis attracted the attention of many of the better quality bespoke coachbuilders of the day, the company’s own Sindelfingen coachwork left little room for improvement. With a lengthy wheelbase of almost 3.3 metres, and a tall engine, the 500 K must have been a challenge to body in sporting style, yet few would deny that with the Roadster version, as seen here, master stylist Hermann Ahrens and the craftsmen at Sindelfingen succeeded brilliantly. 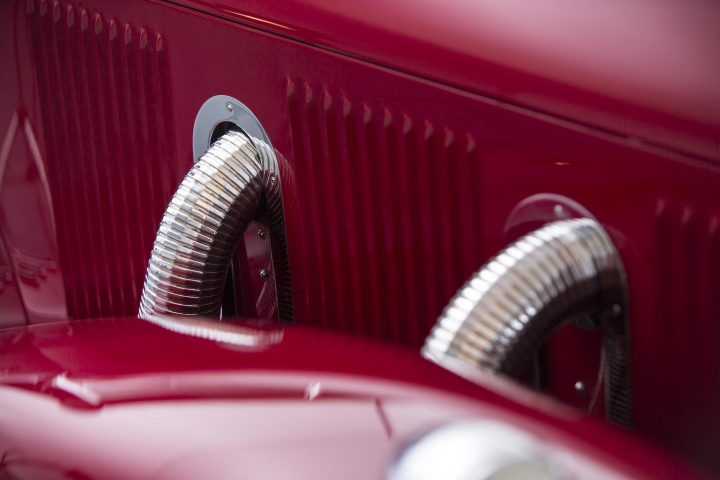 The Roadster was offered in two versions, ‘105380’ being an example of the 1st Series that was characterised by the absence of windup windows, a fully folding convertible hood, and twin spare wheels mounted on the short, tapered tail, which featured chromed, stalk-mounted tail lights. Today finished in a rich shade of red, with interior upholstery in tan leather and a matching cloth convertible hood, the car boasts an impressive array of features that includes chromed wire wheels, twin windscreen-mounted spotlights, and chromed exhaust pipes.

The manufacturing record of the 500 K reveals its exclusive nature: 105 being produced in 1934, 190 in 1935 and 59 in 1936 making a total of 354 cars, of which it is estimated that only 29 were completed with Roadster or Spezial Roadster coachwork. In recent years, the rarity, style and performance of these big supercharged Mercedes have made them one of the most sought-after of all classic cars on the few occasions they have come on the open market. The imposing and supremely elegant 500 K roadster we offer here, chassis number ‘105380’, was completed by Sindelfingen on 6th February 1935; the car was finished in green, the paint being an early form of metallic. Following completion, ‘105380’ was immediately despatched to Berlin where it occupied centre stage on the Mercedes-Benz stand at that year’s Motor Show, held between 14th and 24th February. A photograph of ‘105380’, taken on the Mercedes-Benz stand, is reproduced in Jan Melin’s book, ‘Mercedes-Benz 8 – The Supercharged 8-Cylinder Cars of the 1930s’. 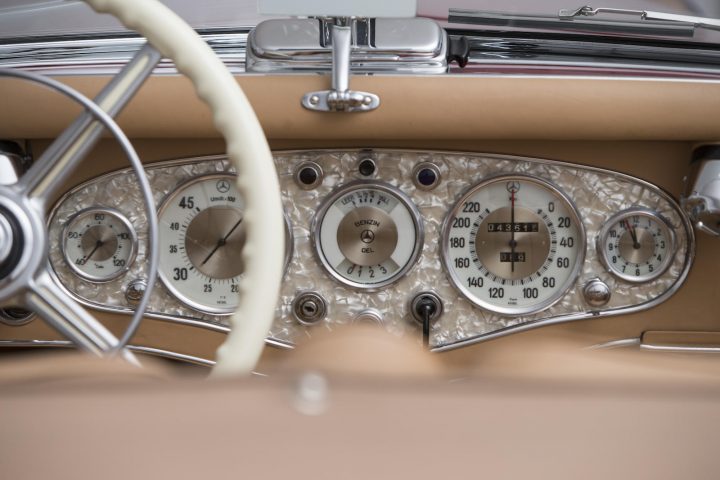 The 500 K remained in Berlin until 22nd March. Purchased there by businessman Hans Friedrich Prym of Stolberg it was despatched to the Mercedes-Benz agency in Aachen, Germany. The Kommission document records the date of the transaction as 25th April 1935.
Prym is Germany’s oldest family-owned company and still has its global headquarters in Stolberg. For more than 400 years Prym has been known for metal products of the highest quality, ranging from press-stud fastenings to superfine electro-mechanical components.

The car’s subsequent history is not known prior to its appearance in the 1970s, still in excellent condition, in the collection of late Russell Strauch of Toledo, Ohio. A pioneer collector, Mr Strauch’s world-class collection of coachbuilt classic automobiles included fine examples by the likes of Mercedes-Benz, Duesenberg, Packard and many more. How the 500 K came to the USA is not known. It disappeared overnight from the Prym premises. All that is known is, that it was stolen that night. In any case, the Mercedes resurfaced decades later in the USA at a collector named Russel Strauch. 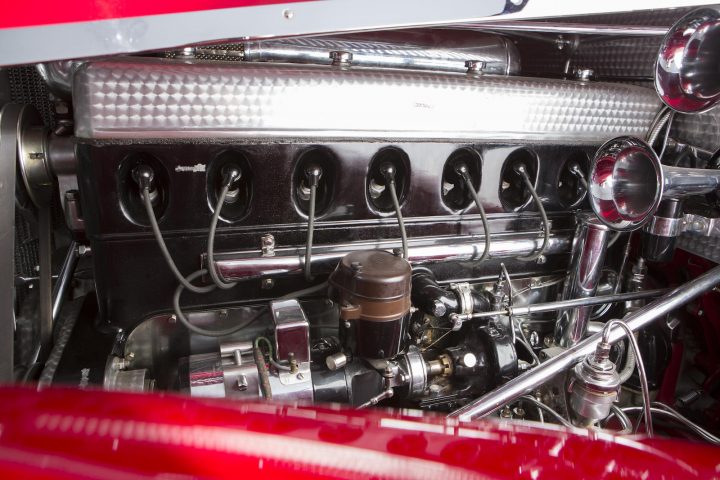 Russell Strauch died in 1976, by which time the 500 K moved to the collection of Don Dickson, where it remained until 1988. The next custodian of ‘105380’ was Richie Clyne for the Imperial Palace Collection. While there the car was treated to a cosmetic restoration, which was carried out by Mike Fennell Enterprises of Saugus, California in 1991.
Subsequently, the 500 K passed into the fastidious care of the Lyon Family Collection where it formed one of the highlights for many years, representing the very best of the marque in terms of both performance and style.

In August 2011, ‘105380’ was auctioned at Pebble Beach in Monterey, California to a car collector from Europe. In March 2012 the Mercedes was exhibited at the Techno Classica show in Essen where the heirs of Hans Prym were able to catch hold of their car. On the basis of confirming interim orders by the competent German courts the parties involved entered into negotiations, which lead to a final and comprehensive settlement on the restitution of the car. Therefore, seventy years after its disappearance, the car returned to its lawful owners. 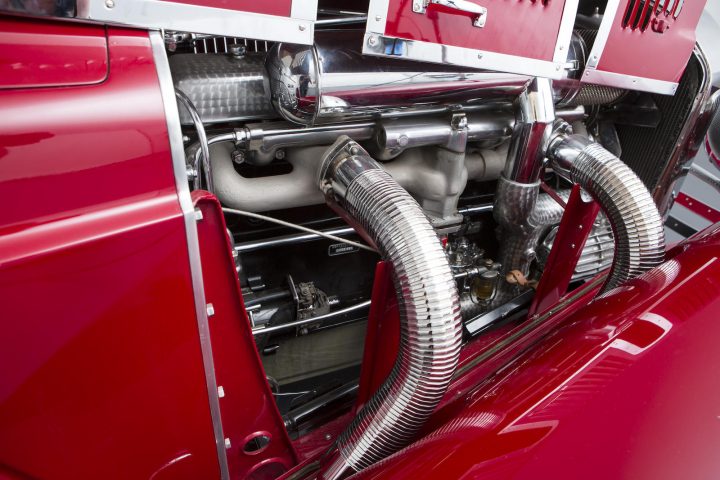 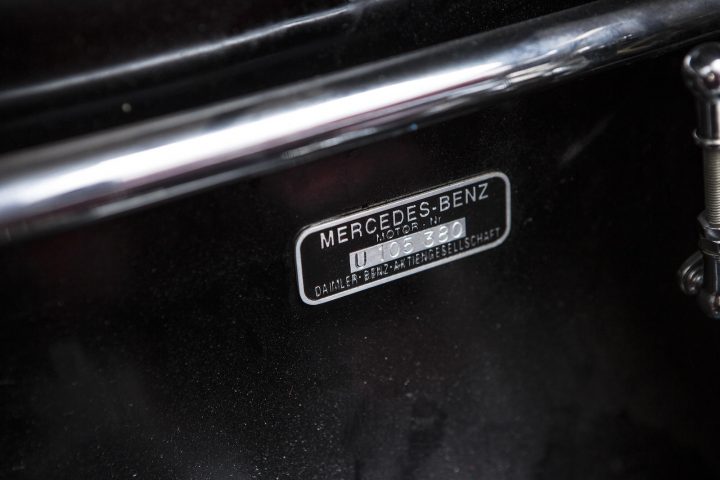