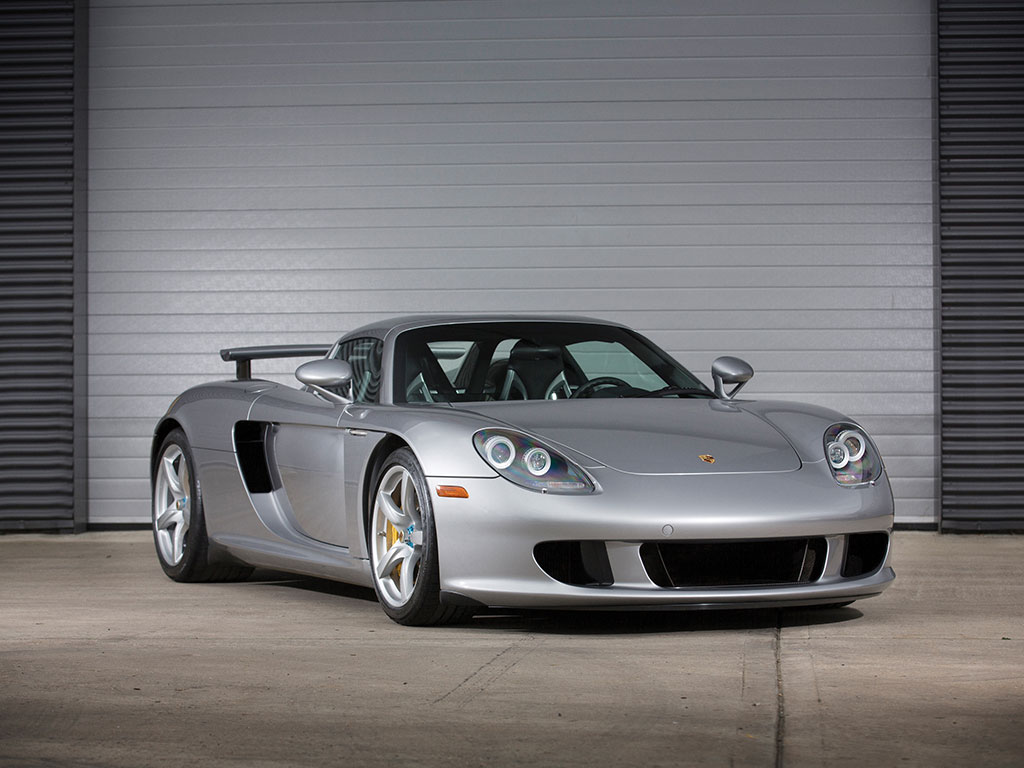 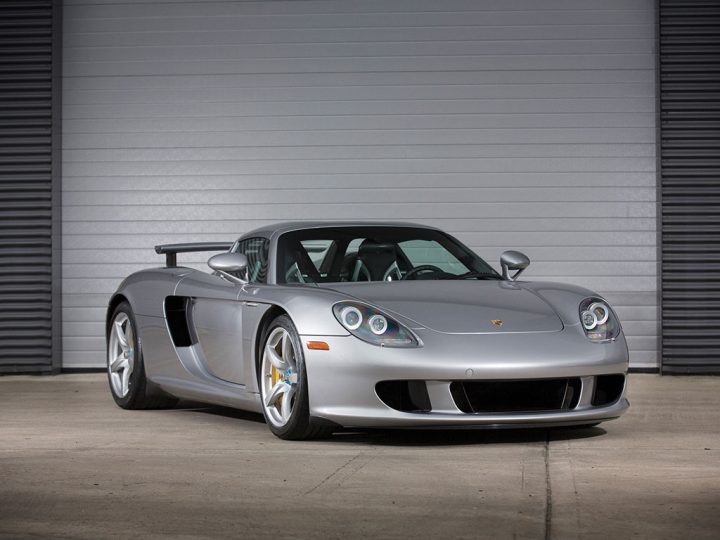 It is difficult to overstate the impact the Carrera GT made on the automotive world upon its unveiling at the Paris Auto Show in 2000. The project had actually begun in 1995, as Porsche’s engineers sought a replacement for the stunning 911 GT1 Le Mans prototype. With a new design already well along, an unexpected change in regulations forced Porsche to go back to the drawing board, hoping to recoup its considerable investment by creating an exclusive high-performance automobile that could be driven on the street. 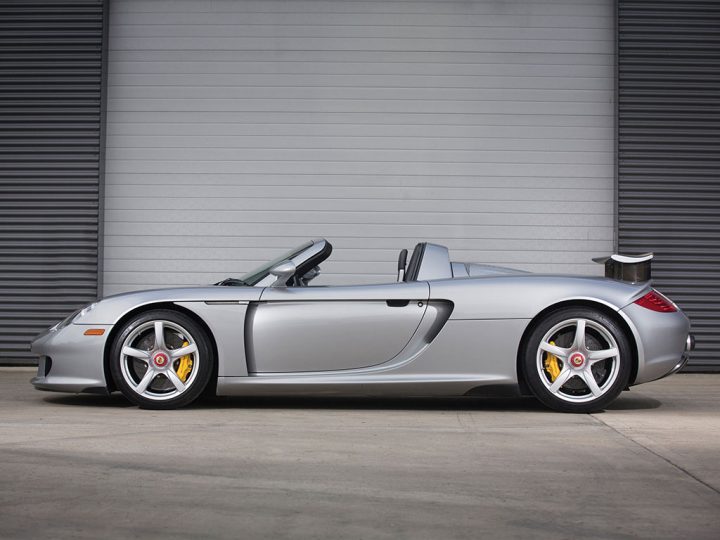 The new carbon-fiber monocoque chassis and sub-frame were manufactured by the Italian specialist firm of ATR Composites Group. Power came from a water-cooled, normally aspirated V-10 of 5.7-liter displacement, originally designed—in slightly smaller form—for the Footworks Formula 1 effort of the early 1990s. When that program folded, the engine design was put aside until the Le Mans prototype project emerged. After economic pressures forced Porsche to turn its engineering prowess to developing a new SUV rather than a new race car, the V-10 was resurrected for the Carrera GT. 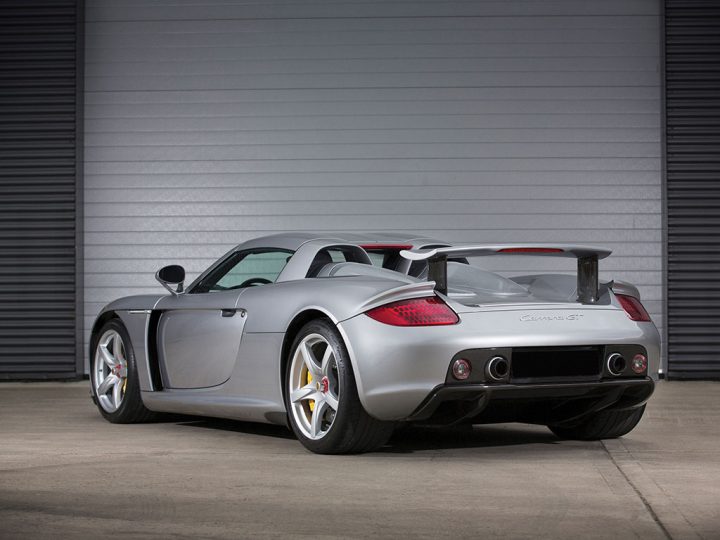 This fascinating powerplant feeds through a small-diameter flywheel and multi-plate carbon-ceramic clutch, allowing an extremely low ride height, and improved handling characteristics. The V-10’s massive power (more than 600 brake horsepower and 442 foot-pounds of torque) was delivered via a rear-mounted six-speed transaxle with limited slip. The engine was fitted with dry-sump lubrication to ensure proper oiling at high RPM or extreme driving conditions. The fully independent double wishbone front and rear suspension was highly advanced and based on proven racing designs, featuring a single coil spring surrounding a gas-pressure shock absorber at each corner, individually adjustable and mounted inboard and actuated via pushrods and levers. Anti-roll bars were similarly adjustable front and rear. Steering was by power-assisted rack-and-pinion. Stopping chores were assigned to Porsche’s hugely effective ceramic-composite (PCCB) disc brakes with power assist. The front brake calipers were eight-piston aluminum alloy monoblock, while those in the rear were four-piston aluminum monoblock units, clamping ventilated brake rotors nearly 15 inches in diameter. Elegant lightweight forged magnesium alloy center-lock road wheels, 19 inches in diameter up front and 20 inches in diameter in the rear, were fitted with 265/30R and 335/30R high-performance tires, and the car is equipped with a tire-pressure monitoring system. Color-coded locking nuts ensured that the wheels would be mounted correctly. 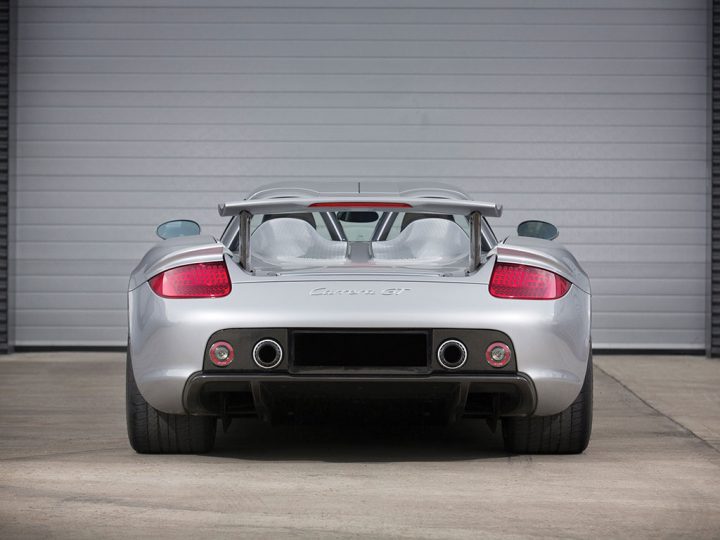 Weighing just 2,755 pounds, the Carrera GT is capable of mind-bending performance, achieving 60 mph in less than four seconds, and can double that speed in just 10 seconds, with a maximum track speed of about 200 mph. To ensure safety and stability at higher speeds, there is a traction-control system, while the underside of the chassis incorporates a thoughtful ground-effects package that draws the car closer to the pavement. A retractable rear wing extends at speeds above 75 mph to aid rear downforce. To prove its over-the-road capabilities, factory test driver Walter Röhrl achieved an astonishing lap of 7:28 at the Nürburgring Nordschleife in July 2004, a Porsche record that stood until 2010. Inside the cabin, the driver and passenger are cosseted by rich leather, brushed aluminum, and carbon-fiber trim. There is a pair of manually adjustable racing-style seats with special leg and knee bolsters to ensure comfort. Although the Carrera offers racing-car levels of performance, it is equipped with air conditioning and power windows. Along with the standard array of instrumentation, there is a color TFT screen that provides varying levels of data to the driver, along with a comprehensive navigation system. A pair of removable lightweight roof panels can be stored aboard when not in use. The 24-gallon fuel tank allows reasonable distance between refills. 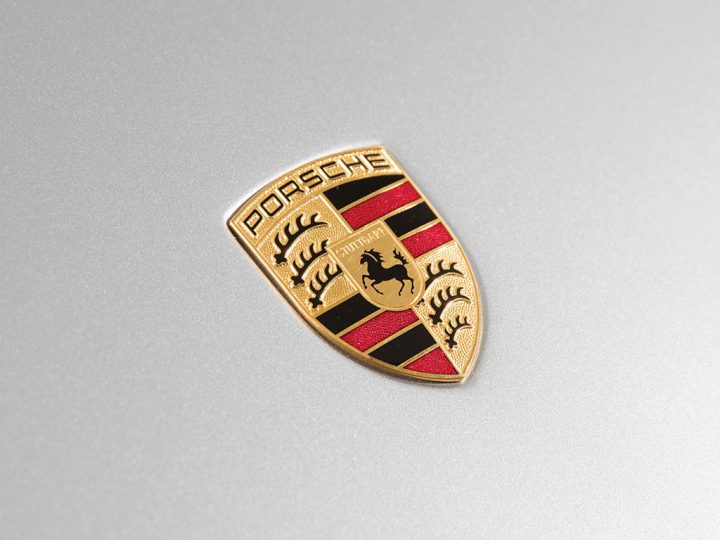 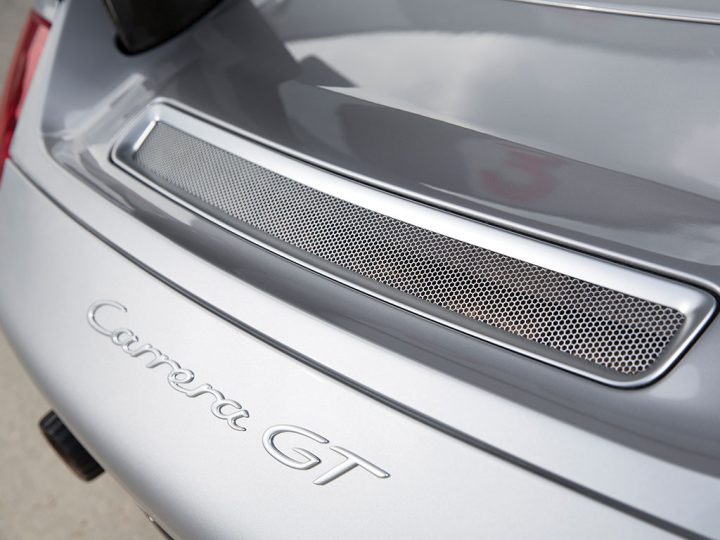 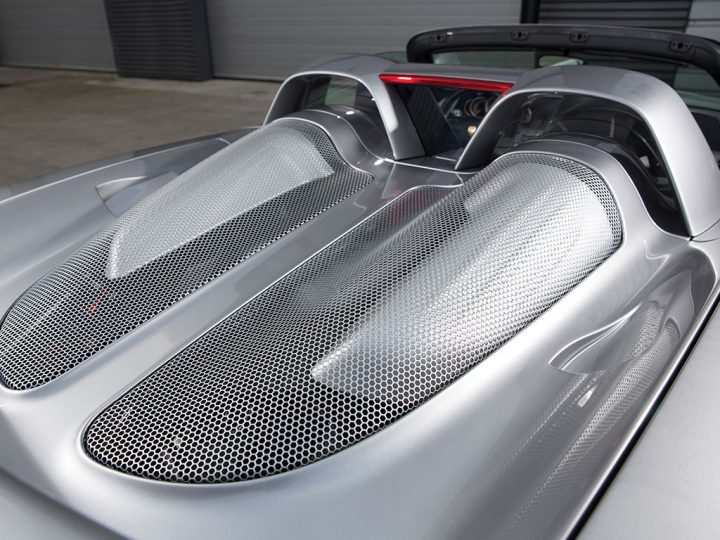 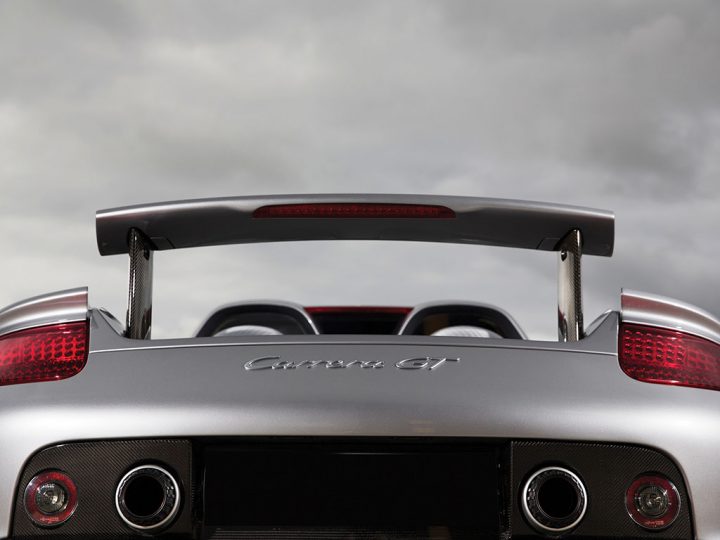 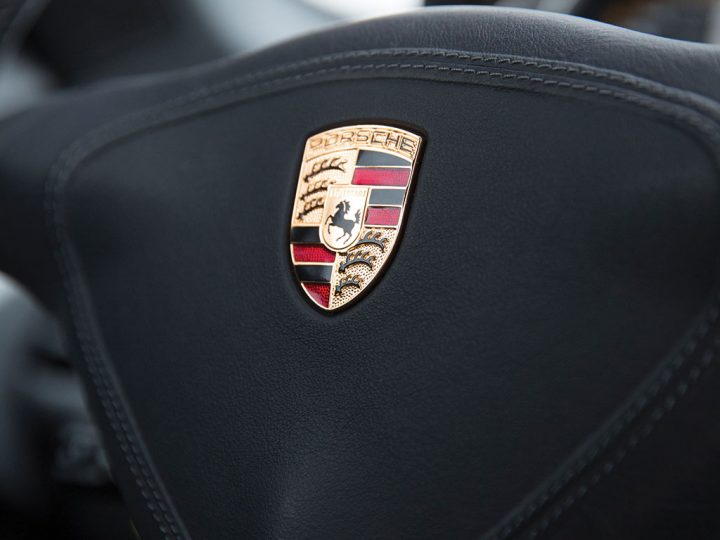 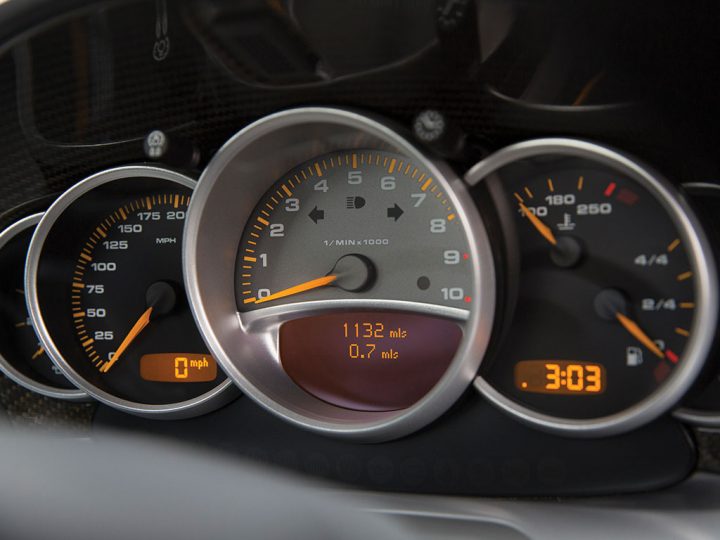 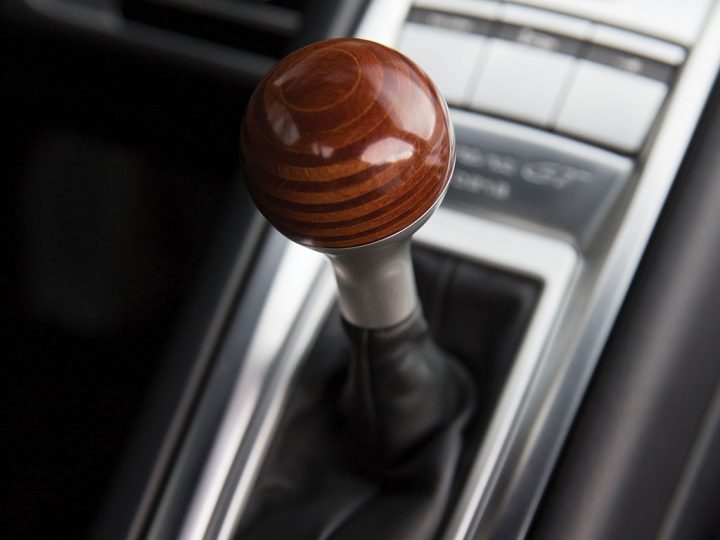 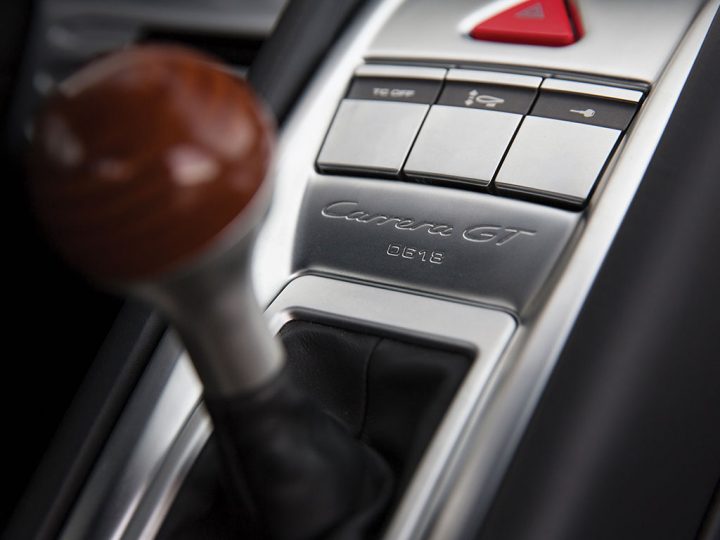 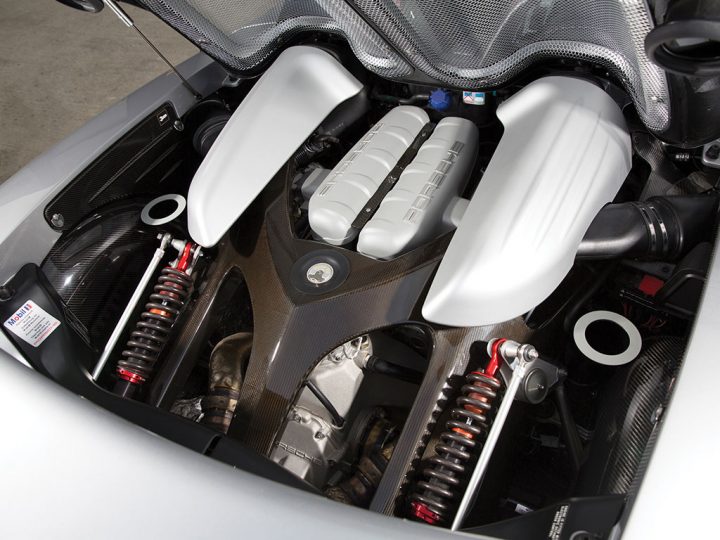