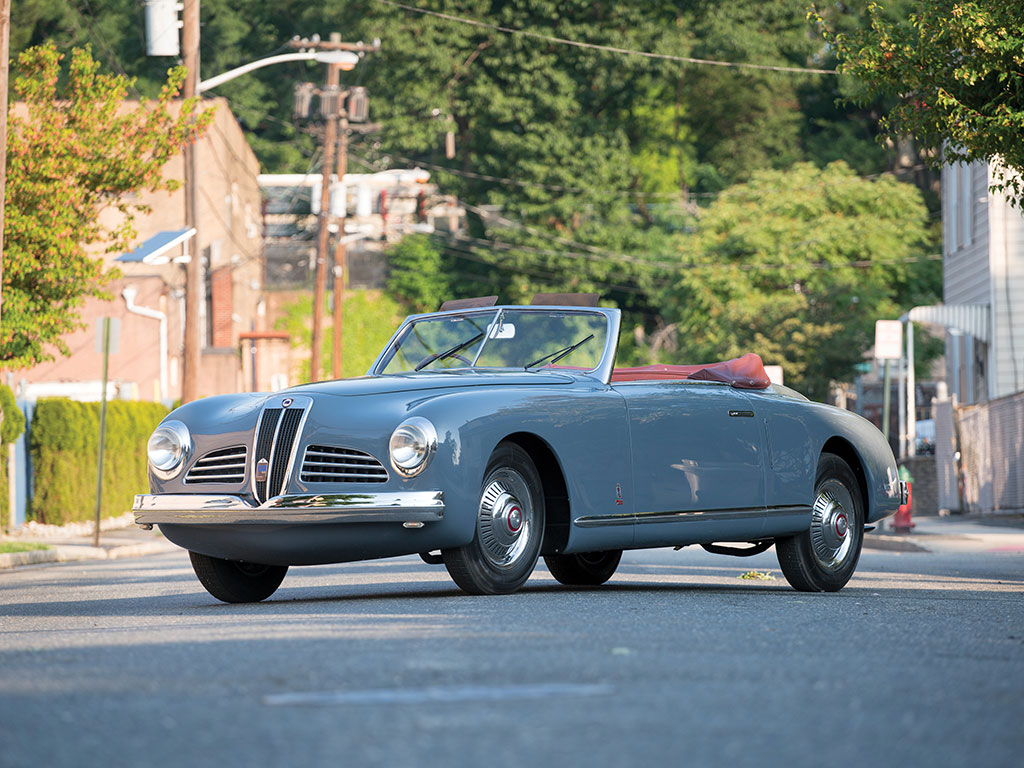 The Aprilia was a pivotal model for Lancia – the last model completed before Vincenzo Lancia’s death in 1937. Entering production that year, the factory berlina had an advanced unit body, four-wheel independent suspension, and a remarkably compact narrow-angle V-4. The 1939 Series II saw the engine enlarged from 1,352 cc to 1,486 cc, with the emphasis on increased torque and smoothness. As was Lancia’s practice, the factory offered a platform for coachbuilders. With a structural engine bay and cowl, and a unitized sheet steel floor and rear, the platform provided torsional stiffness while allowing enormous design freedom.

Pinin Farina’s engagement with the Aprilia began from the model’s introduction. Before the war, Pinin Farina built bespoke Aprilias for road and competition use, as well as two-door cabriolets and four-light and six-light berlinas, which were offered in the factory catalogue. Remarkably, although late-war production was greatly reduced by Allied bombing, Aprilia production continued throughout the conflict.

As a result, when Aprilia chassis number 439-11844 was delivered to Pinin Farina in 1946, the carrozzeria was intimately familiar with the model and its design potential. It was clothed in cabriolet coachwork and fitted with two seats plus rear jump seats. The driver and passenger face a dashboard color-matched to the upholstery and set with a striking composition in bakelite and chrome. It is, however, the cabriolet’s exterior that sets it apart – a remarkable exercise in clean lines and details. With the lines of the windshield pillar and side window extending into the door cuts, it is as beautiful with the top up as with it down. With its spare brightwork, radiused wheel arches, and subtle modeling, the design established Pinin Farina’s post-war direction as much as their legendary Cisitalia 202 of the following year.

With few opportunities to show the car in war-torn Italy, and the 1946 Paris Salon d’Automobile closed to the former Axis countries, Battista Farina was determined to ‘crash the party.’ Joined by his son, Sergio, at the wheel of a Pinin Farina-designed Alfa Romeo 2500, Battista drove this car from Turin to Paris. There he displayed his two cars outside the Salon, which saw them featured on the cover of the widely read magazine, L’Illustration. Following this publicity coup, the Aprilia was acquired by Roblou, a Lancia importer in Neuilly sur Seine, where it remained until 1965. The car was discovered in northern France in 2010, and subsequently underwent a thorough restoration, in its original colors, in Pisa, Italy.