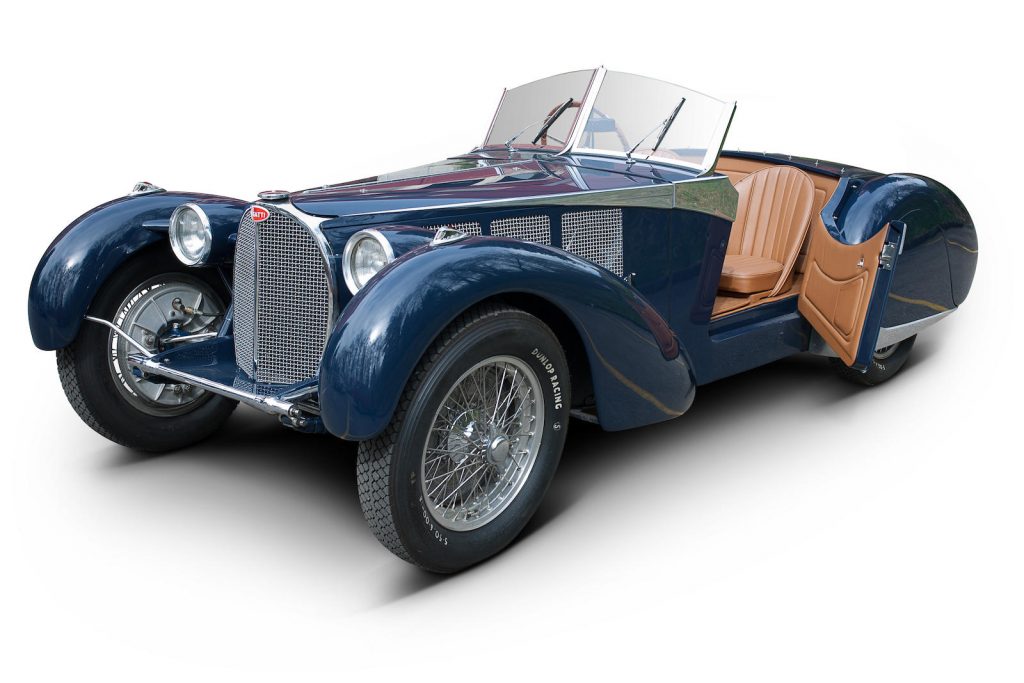 Chassis number ‘57.577’ was delivered on 8th October 1938 to Monestier, the Bugatti agent in Lyons, and first owned by industrialist Emile Glaizal. Its original body was made in standard Stelvio cabriolet style by Gangloff. After the war, in April 1947, Glaizal moved to Geneva, Switzerland, taking the Type 57 with him. The car was registered ‘GE 12549’, at which point it is noted that the car had hydraulic brakes all-round which it retains to this day. The registration changed to ‘GE 11982’ when Glaizal sold it to public works contractor and Bugatti collector, Gaston-François Riondel. Eventually the Type 57 ended up in the warehouse of the Geneva Bugatti agent, Jean Séchaud, and was purchased by Cäsar Schaffner, together with several others, after Séchaud sold up in the mid-1960s. Bizarrely, Séchaud had sold his cars for scrap!
Schaffner decided to restore ‘57.577’ in the style of ‘57.593’, the Corsica-bodied Type 57S sports roadster first owned by Colonel G M Giles, a former chairman of the Bugatti Owners Club. Based in North London, Corsica was a relatively small firm that allowed clients considerable freedom in determining their cars’ final appearance – surely the ultimate in ‘bespoke’ – an approach that endeared it to wealthy sporting motorists. The body of the Colonel’s car was designed by his brother, Eric Giles. Registered ‘GU 7’ and known as ‘La petite Sézanne’, the ex-Giles Type 57 currently resides in a private collection in the USA and in 1993 won ‘Best of Show’ honours at the Pebble Beach Concours d’Élegance.
Schaffner removed his car’s original Stelvio body and had the chassis frame professionally shortened to a wheelbase of 2.6 metres (from 3.3 metres). This is much shorter than the standard Type 57S wheelbase of 2.98 metres. The engine was sent for reconditioning to the firm of Bereuter (Heinz and Kurt). Copies of photographs of the rebuild, held in Bereuter’s archive, are included in the sale and show the conversion to downdraft induction.
Using photographs of ‘La petite Sézanne’ for guidance, Schaffner made the aluminium body himself with assistance from professional craftsmen. The Bugatti was finished in 1967/68 and painted in pale blue with tan upholstery. Using trade plates, Schaffner exhibited it at various classic car meetings around Switzerland before selling it on to Rolls-Royce collector, Matti Schumacher. Within a matter of days the Bugatti had changed hands again twice, leaving Switzerland for Germany circa 1972. From Germany the car went to the UK, was sold via a London showroom to Robert Yung, an American collector from Hawaii, and exported to the USA. The number currently stamped on the car – ‘57.584’ – is believed to date from around this time when, coincidentally, the real ‘57.584’ was returning to Europe from the USA. ‘57.584’ currently belongs to a Bugatti enthusiast in the Netherlands.