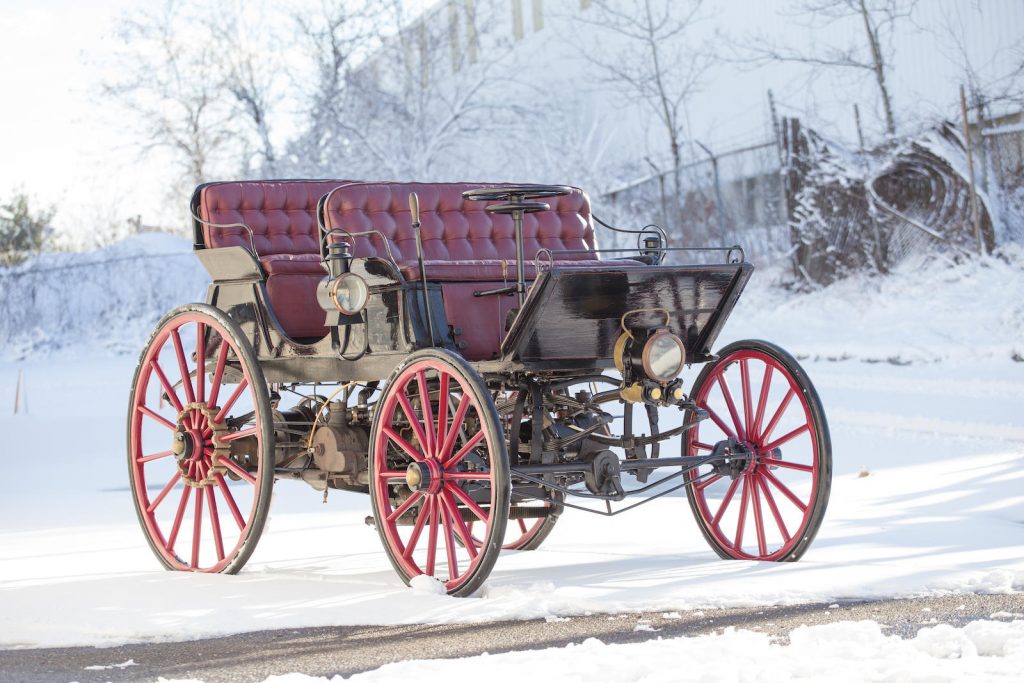 The old adage there is nothing new under the sun was never truer than with the 1896 Armstrong phaeton. This remarkable machine displays features that would not be commonly seen for decades and in some cases a century. This highly ambitious design was the brainchild of Harry E Dey. Throughout Mr. Deys involvement with the automobile industry he championed concepts that were startlingly forward looking. His primary interest was in the electric automobile and ways of dealing with its Achilles heal, a lack of range. Dey’s first automobile design was completed in 1895. An innovative electric car design that brought Dey notoriety among the small community of 19th century automobile manufacturers.

During 1895 the Roger Mechanical Carriage Company of New York took notice of Dey’s skills. This concern had been importing the Roger Motor Carriage from France and was interested in developing a version of the Roger suitable for manufacture in America. Dey was commissioned with the task. A Roger motorcar was sent to him to study but Dey chose to embark on an all-new design. The resulting design fused Dey’s electrical interests with his client’s desire for a gasoline carriage.

The Armstrong Company of Bridgeport Connecticut was commissioned to build the prototype on offer here. Armstrong had extensive manufacturing experience and capabilities and was well suited to the job.

To describe Dey’s new automobile design as ambitious would be an understatement. Dey designed a car that was equal parts electric and gasoline automobile. His masterstroke was using an electric dynamo as the flywheel of the large, opposed-twin engine. This design allowed the engine to charge its storage batteries for ignition and lighting but could also rotate the engine for starting. Dey built solenoids into the intake valve housings to serve as de compressors while turning the engine electrically. The ample size of the flywheel dynamo would even allow the vehicle to be propelled under electric power alone.

Deys design innovations extended to the drivetrain. An electrically operated clutch would join the engine and transmission and would gradually engage as motor speed increased, generating more dynamo power. The transmission, a three-speed constant mesh design engaged by a sliding key system. Dey specified half the gears be cut from rawhide to reduce noise. Gearshifts were executed by turning the steering column selector wheel. The electric clutch automatically disengages and reengages the engine power during gear changes.

The motor is a more conventional opposed twin of 6½” x 7″ capacity with a novel centrifuge controlled automatic ignition system. The chassis is of tubular construction and the back half doubles as exhaust and muffler. A more conventional car would have had a tiller but the Armstrong gets a steering wheel again years ahead of its time.

“The flywheel is constructed as a dynamo, which by rotary charges a storage battery, carried in the vehicle. At the time of starting the carriage, the motorman turns a switch which discharges the storage battery through the dynamo, converting it for a few seconds into a motor, which, being upon the main crank shaft, gives rotation and does away with the necessity of starting the flywheel by hand. After the motor gives a few turns, the cylinder take up their work, and the battery is disconnected from the dynamo which then acts as a flywheel.”

“The flywheel dynamo furnishes the current for the induction coil of the sparking mechanism as well as the electric lamps at night, thus doing away with the necessity of going to a charging station.”