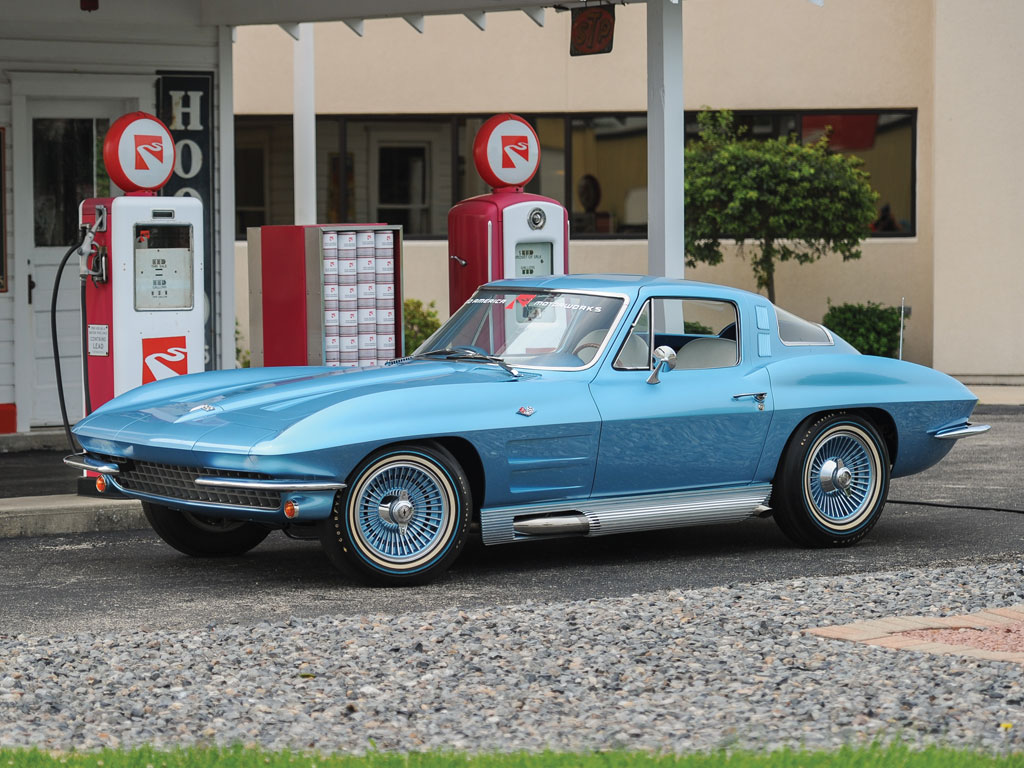 Executives at General Motors had special cars since at least before World War II, and probably earlier. For the boys in GM Styling, 1964 seemed to have been a particularly busy year, as in addition to show cars and various one-off studio creations, they built at least five unique Corvettes for executives and family members. Retired styling chief Harley Earl got a Sting Ray Convertible; his wife, Sue, had a custom Coral Pink Coupe; and Semon “Bunkie” Knudsen, general manager of Chevrolet since 1961, had this car.

To understand this Corvette’s importance, it is pertinent to understand Bunkie Knudsen’s background and his effect at GM. He was the son of former GM President William “Big Bill” Knudsen, but he was also someone who had personally worked the GM assembly line during the summers while in college, along with working in a Detroit machine shop and attending MIT. He joined Pontiac as its general manager, swiftly turned a stodgy brand into a performance powerhouse, and moved on up to Chevrolet, where he created the same theme of high performance. The famous 1963 Z06, the Corvette Grand Sport racers, and the Mark IV engine all received his approval before his departure from the company in 1967.

Thus, it was obvious that a man who loved and sponsored performance would want some for himself. He ordered his first customized Corvette in 1963, with this car following it not long after; as an early-production 1964 model, it would have been ordered in the fall of ’63. It was recorded as GPV-57, a number borne on a Chevrolet Engineering dashboard tag, indicating that it was a car that was company-owned and specially built by either the Styling or Engineering Departments.

The base car was fitted with the L76 327 V-8, making 365 horsepower from its high compression and four-barrel carburetor, mated to the “mandatory optional” M20 four-speed transmission. It was fitted with an immediately distinctive and recognizable hand-built front end, with a reconfigured hood that prototyped that of the 1965 Corvette, with deeper vents and unique bumpers relocated higher, leaving room for an oversized egg-crate grille. This, too, was echoed in production, but not until 1967.

GM Styling ignored the car’s trim tag, which stated that it was to be finished in Silver Blue over Blue vinyl, and instead painted it in Du Pont FireFrost Blue, a 1964 Cadillac color, over body panels that were specially prepared, filled, sanded, and gel-coated to provide a perfectly smooth surface. Nothing but the best would do for the boss.

The same FireFrost Blue color was used for the interior paint and trim, accentuated by custom high-back white leather bucket seats, a leather console, and dark blue cut pile carpeting (also sourced from Cadillac) with polished “toeboards.” The dashboard is finished in blue-grained fiberglass with white coves, and unique door panels of white leather and stainless steel with four window switches were fitted. The steering wheel is a 1965-style unit, hand-built with a unique hub and teak trim.

Under the hood, the engine was largely stock, although Knudsen apparently specified a fair amount of custom chrome trim. Large side pipes, resembling the 1969 Corvette’s optional exhaust, were fitted, along with blue-painted shields and painted two-bar “knock-off” wheels, equipped with Goodyear Blue Streak HP tires with a FireFrost Blue stripe outside the tires’ narrow white stripe.

The immense investment in man-hours that went into the Knudsen 1964 Sting Ray has always led to speculation that it was intended as a Motorama show car, but thus far, no proof of that has emerged. It was handed over to Bunkie, who drove it daily from his home in the suburbs to the Chevrolet offices for several months. At that point, he was done with the car, which had apparently been replaced by another new “toy.” It was eventually sold by the Engineering Department to an employee, Mr. Gailey, who sold it on in 1965. Over the next 22 years, two subsequent owners used it as everyday transportation.

The Corvette was rescued in 1988 by Dr. W. Vance Shappley, a collector of historic Corvettes from Germantown, Tennessee, who was able to recreate the badly damaged cast grille and side exhausts when restoring the car to its original condition. The car was then included in a special Bloomington Gold Motorama Gold Collection in 1993, and it remained in Dr. Shappley’s personal collection until its sale in 2006.