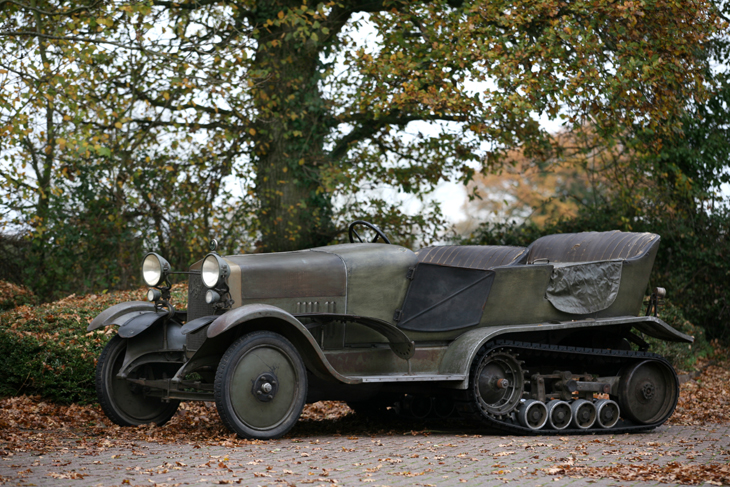 This extraordinary ‘time warp’ Alfa Romeo, complete and original in all known respects, is believed to be the solesurviving four wheel drive Alfa Romeo half track in the world. It hasspent nearly all its life in the New England area in the USA and wasunderstood to have been exported there from Italy when new to under take service as winter transport in the mountains, presumably for a wealthyski-ing and motoring enthusiast. Due to its remarkable nature the carhas survived for more than 80 years in unmolested original condition. After careful checking over by well known Alfa expert Jim Stokes in England the car started on the handle with excellent oil pressure and the entire drive system was found to be operational.

The car is based on an Alfa Romeo RM chassis with the normal 2-litre, 4-cylinder RM engine but which has been modified to dry sump specification – no doubt to deal with the inclines and side slopes of mountainous terrain. The track mechanism was built using Citröen patents under licence as proclaimed by a plaque on the wheeled bogey carrying the legend ‘Propulseur- Kegresse- Hinstin (Licence 48) André Citröen’. The front wheel hubs are marked with the Citröen gear motif. The drive system is based on that used in the Citröen Kegresse but incorporates the original RM transmission brake. The four-speed gearbox feeds via a prop shaft into another enormous transmission case, housing a second gearbox with a dual range. The concept of the track laying system was developed by Adolph Kegressewhen Technical Manager for Zar Nicholas II as early as 1910. By 1920, assisted by Jacques Hinstin, Kegresse was running the Chenilles department for André Boas and André Citröen at the Citroen Gear Company. In 1921 three Kegresse Citröens climbed the Lautaret and crossed the Mont Genevre Pass clearly showing their ability over snow.

This RM and its track gear both exhibit early chassis and licence numbers. The RM chassis numbers run from 1923-1924 and are listed as 12001 – 12265; it is known that the early numbers were restricted to prototypes so ‘12023’ could date this vehicle tovery early in 1924 or possibly even late 1923. At the Rétromobile showin 2005, two Sahara type Citröens were on display, one with a track mechanism licence number of 425 thereby showing how early the RM’strack gear is.

This must have been a very expensive car for Alfa Romeo to build; it may have been originally conceived as a prototype for Mussolini’s army, as the possibility of a military order would have justified the expenseand would also explain its original and untouched grey green livery.

The lovely patinated condition of the rear seat and grab handles suggests that the car saw frequent use at some stage in its life. The state of the quaint wooden skis which are carried on front wings and designed to fit under the front wheels in difficult terrain also suggests that the car was active in snowy New England winters. How ever regular the use may have been, the nature of the machine makes it likely that it will have covered few miles during its entire life –this is consistent with the car’s excellent mechanical condition.

This unique piece of motoring and Alfa Romeo history will excite the interest of even the most jaded collector andwill no doubt find its proper place in a private museum of the highest quality or perhaps as a talking point and occasional winter transportfrom a spectacular chalet or mountain lodge high in the Alps or back inits old North American haunts.