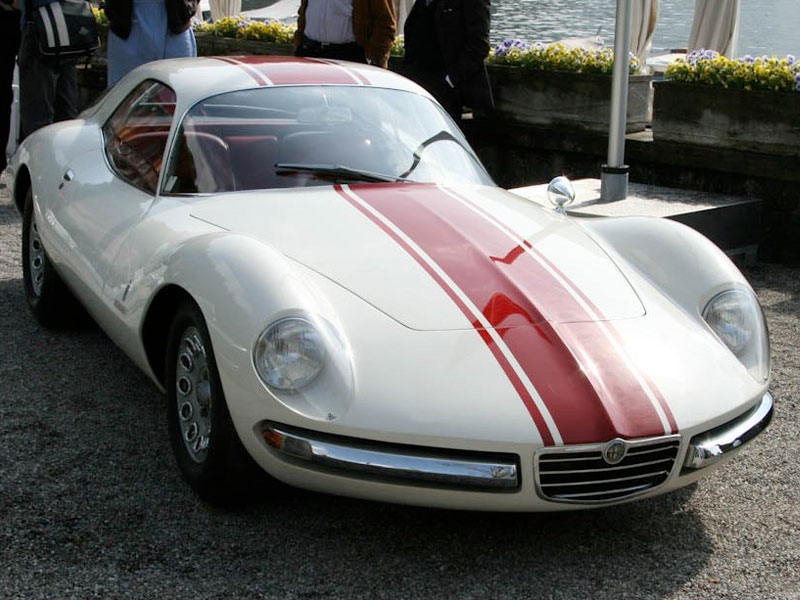 Alfa Romeo had not produced a purpose-built racing car for almost a decade when Carlo Chiti’s Autodelta rolled out the ‘TZ’ in June of 1962. In the years before the Italian manufacturer’s racing cars were all modified and even re-bodied road cars. Autodelta was officially independent from Alfa Romeo but received considerably works support and was incorporated in 1964.

Both companies decided to use the exceptionally low machine as a basis for a new show car. Bertone was in first with the ‘Canguro‘ (Italian for kangaroo), launched at the 1964 Paris Motor Show. The highly acclaimed design was penned by Giorgietto Giugaro and shared its basic proportions with Zagato’s original. Plans to produce a limited run were shot down by Alfa Romeo.

Pininfarina launched their take on the TZ a few months later, at the 1965 Turin Motorshow. Known as the Giulia 1600 Sport, the car featured a very distinct design. It was penned by the company’s long-time designer Aldo Brovarone, who certainly reached his artistic peak in the mid-1960s, producing a serious of beautiful show and road cars. The Giulia 1600 Sport was certainly no exception.

Brovarone further accentuated the minimal height of the chassis, one of the very last produced, by using long overhangs and pronounced front fenders. Another distinct design cue is the crest on the engine cover, running from the Alfa Romeo badge back. It does not take much imagination to see that the design was a front-engined version of the Ferrari Dino concept shown that same year.

Both show cars were only very rarely seen since their launch. The Canguro was virtually destroyed during testing and only resurfaced in 2005. The history of the Giulia 1600 Sport is somewhat similar but quite in contrast, it has survived in remarkably original condition. Today both cars are owned by the same Japanese collector.

Shown for the first time for almost a decade, the unique Giulia 1600 Sport was brought out for the 2010 Concorso d’Eleganza Villa d’Este. In the courtyard of the exclusive hotel, the spectacular machine was reunited with Brovarone. The car’s creator was on hand when the current owner received the FIVA award for the best preserved car in the concours.