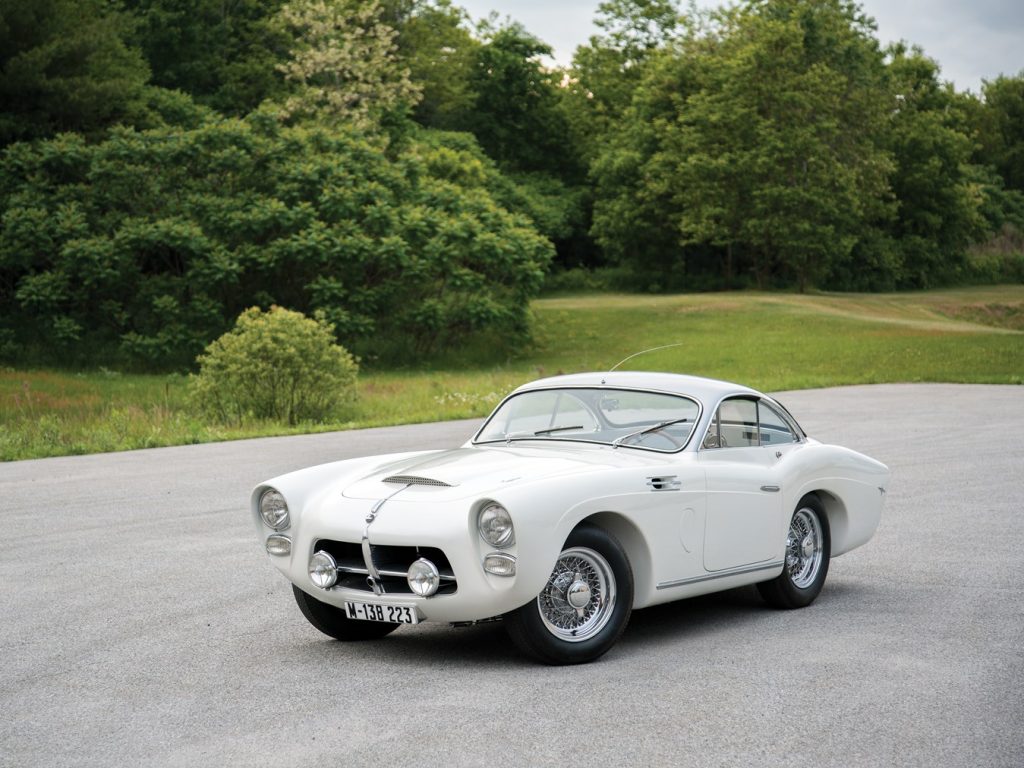 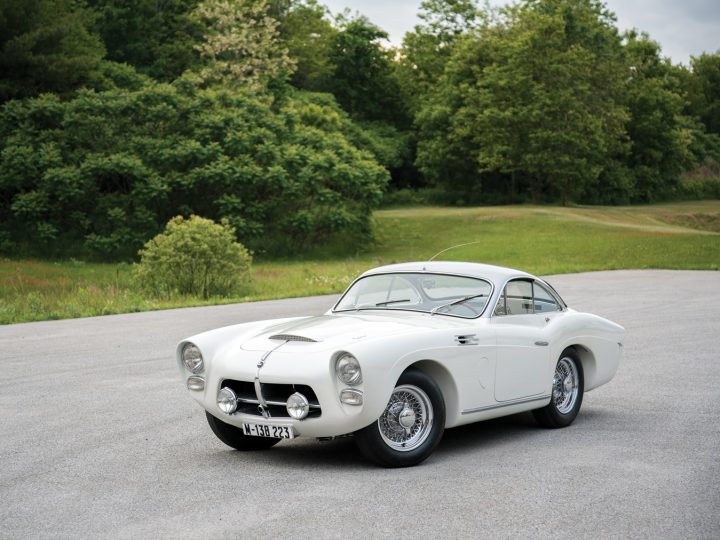 The Pegaso’s story is unlikely to the point that even Preston Tucker would have scratched his head in wonderment. That a totalitarian dictatorship would decide to further Spain’s reputation by building a world-beating sports car in a state-owned truck factory (ENASA) using a brilliant engineer brought in for the occasion was rather unusual in its own right. That this would be done in a time when Spain was crawling its way back from the economic doldrums of its own civil war and World War II was stranger still. But most surprisingly of all, this unlikely scenario produced an automobile that was no mere flash in the pan but a superb, advanced sports car that incorporated the best of the latest in racing car technology. 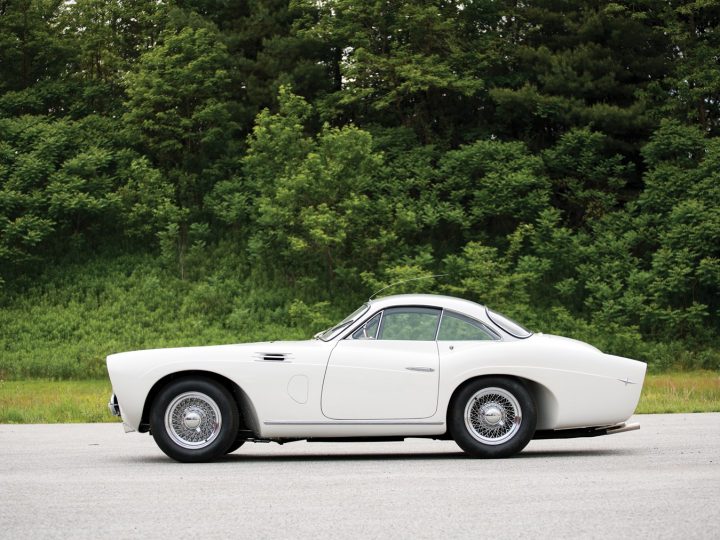 It was an in-your-face, unabashed Ferrari challenger, right down to the name; if Ferrari’s horses would prance, then the Spanish horses would fly.
The aforementioned engineer was Wilfredo Ricart, an experienced designer and engineer whose previous associations included working for Alfa Romeo and being one of the numerous rivals of Enzo Ferrari. Ricart’s design for the Pegaso was innovative, interesting, and completely up to the moment, including the use of a four-cam, all-alloy V-8 with dry-sump lubrication and a five-speed rear transaxle, something that would not become a fixture on Ferraris until the 275 GTB of a decade later.
The flip side of the Pegaso story was that while it proved that a struggling agricultural economy could build an outstanding sports car, it also demonstrated that it took a lot of money to do it. Production of these cars spared no expense, which in turn placed a great deal of financial strain on a firm that was, after all, mainly focused on building nice, solid trucks for nice, stolid government agencies. Eventually the project was summarily written off, and the Pegaso flew for the last time in 1958 after approximately 84 chassis had been built. 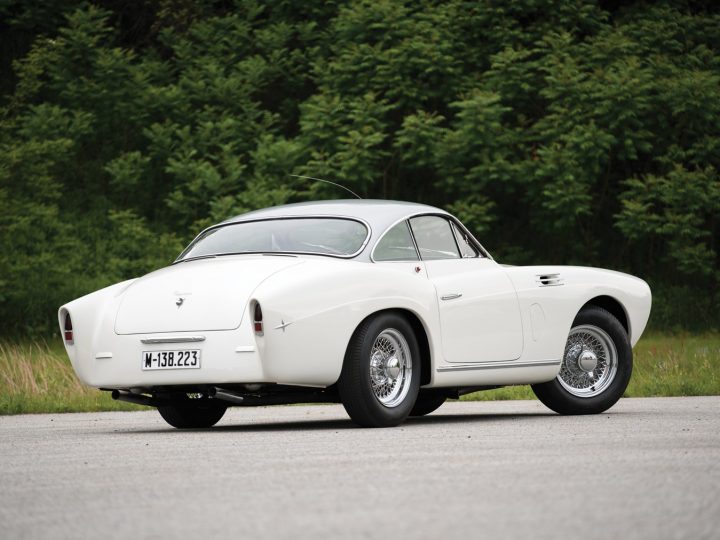 The Pegaso presented here is chassis number 0148, one of 18 later cars produced in two series with flamboyant bodywork by the renowned French coachbuilder Carrosserie J. Saoutchik of Neuilly-sur-Seine. The most desirable of Pegasos, these cars featured dramatic styling, with a low roofline and emphatically curved fenders that form hooded arches over the round Marchal headlamps and square fog lights inside a teardrop-shaped surround, and which are opened up around the wheels to emphasize the power of their thrust. The result is a visual sensation that the car is leaping dramatically forward. Typical of Saoutchik, delicate trim details form a feast for the eyes, including the perforated aluminum grille in the hood scoop, the subtle use of chrome and polished aluminum, and the hidden “pocket” door handles.
This car was displayed on the Pegaso stand at the 1954 Paris Auto Salon, finished in Pearl White with a two-tone roof treatment, and won both it and Saoutchik design awards. It was photographed and appeared in the January 1955 “Annual Show” issue of Road & Track. Interestingly, it was not sold to its original owner, a Madrid resident, Don Julian Sanchez Araguena, until over a year later, in February 1956; it was registered in his name as M-138.223.

Following two subsequent Spanish owners, the Pegaso was acquired by Garland W. Burke, a United States Air Force pilot stationed in Madrid at the time. Mr. Burke eventually brought the Pegaso home with him to the United States, and it remained in his ownership, garaged and largely un-driven, until 1989.
That year the car was sold to Arthur L. Foley III, who commissioned a restoration by Phil Reilly and Company, which included a complete engine rebuild by specialists in Europe. Prior to the restoration, the minimalist tubular bumpers had been deleted, leaving only the clean lines of the finely sculpted nose and tail. It was subsequently displayed at the 1994 Pebble Beach Concours d’Elegance and driven by Mr. Foley on the Colorado Grand.
In its previous ownership, the car was treated to a complete paint strip procedure to regain proper panel fit and finish, and it was refinished in its original Pearl White with a Grey Metallic roof. The transaxle was removed and rebuilt, including the installation of remanufactured gears, which were machined, heat-treated, and then worn-in on a fixture to ensure proper mesh. The suspension was checked, adjusted, and aligned, and the brakes were serviced and adjusted. The drivetrain remains the original, retaining its desirable 2.8-litre, quad-cam engine, featuring the extremely rare and potent dual four-barrel Weber carburetors and an 8.1:1 compression ratio, good for a respectable 195 horsepower, and mated to a five-speed ZF transaxle. 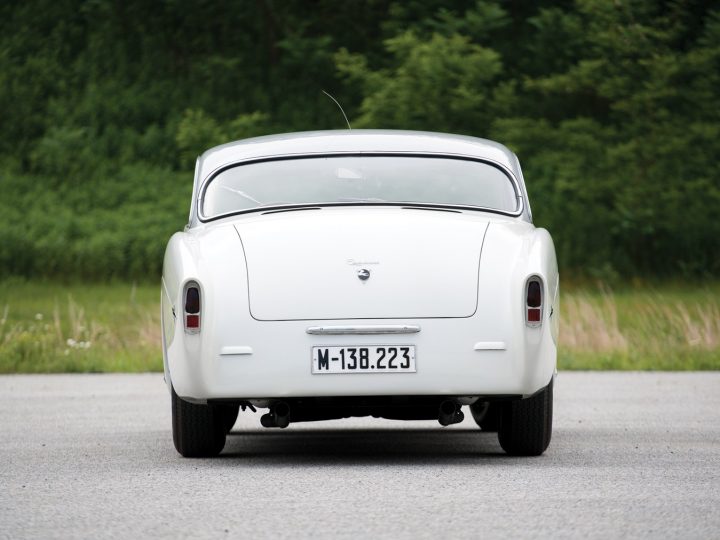 A full new interior was expertly fitted using the highest-quality grey leather, and the original Podiomatic radio was rebuilt and functions as it did when new, as does the Bosch heater. The grey carpeting and headliner are sharply contrasted by the sleek look of the charcoal grey-painted dash, which is a small work of art in itself. It incorporates Jaeger gauges with beautifully etched glass, Art Deco-inspired Bakelite control knobs, and a wood-rimmed Nardi steering wheel that has a delicate cross-hatch pattern etched into the three spokes. The harmony of the interior and exterior styling is enhanced by three grilles at the rear of the cabin (two for ventilation and one for the speaker), which are of the same pattern found on the hood scoop grille.
After carefully fitting all the original body panels to the car, it was painted, color sanded, and buffed to a high polish, as it would have been for the Paris Salon in 1954. The numerous aluminum panels used to trim the interior were repaired and polished to the proper luster. Many hours of assembly, testing, and tuning finished off the restoration in time to be displayed at the 2013 Pebble Beach Concours d’Elegance. In its current ownership, the car has been shown only once and presented with an Amelia Award in the Pegaso honorary class at the 2016 Amelia Island Concours d’Elegance, thus leaving a world of concours possibilities open to its new owner.
One of only three extant Saoutchik Series II Berlinettas that retain their original major components, chassis number 0148, the Paris show car, is arguably among the most historically significant, authentic, and best-preserved Pegasos—and certainly among the most striking. 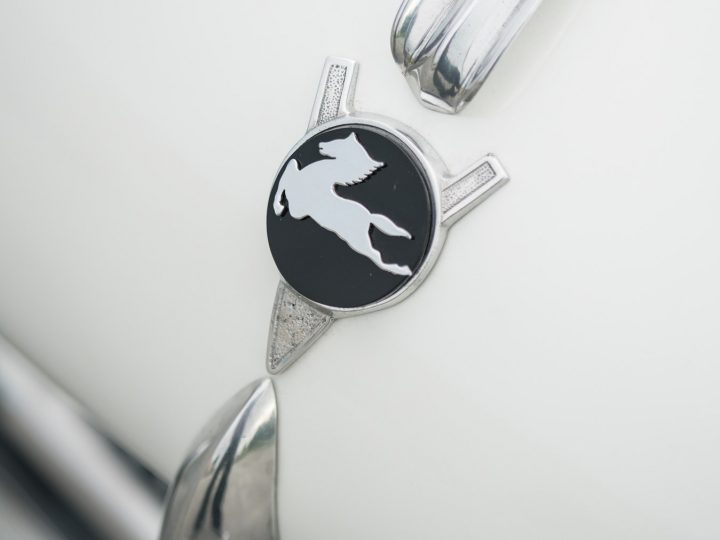 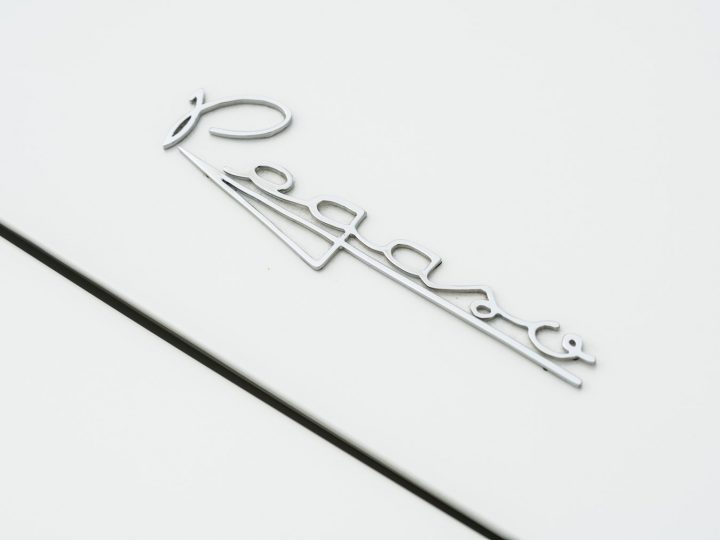 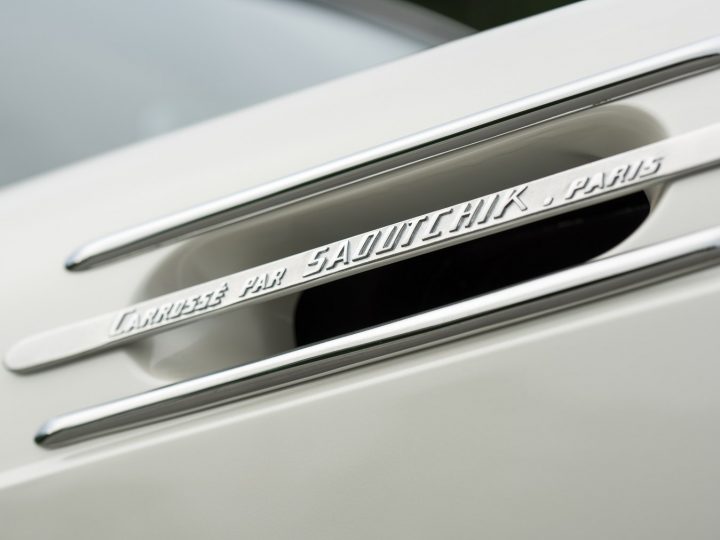 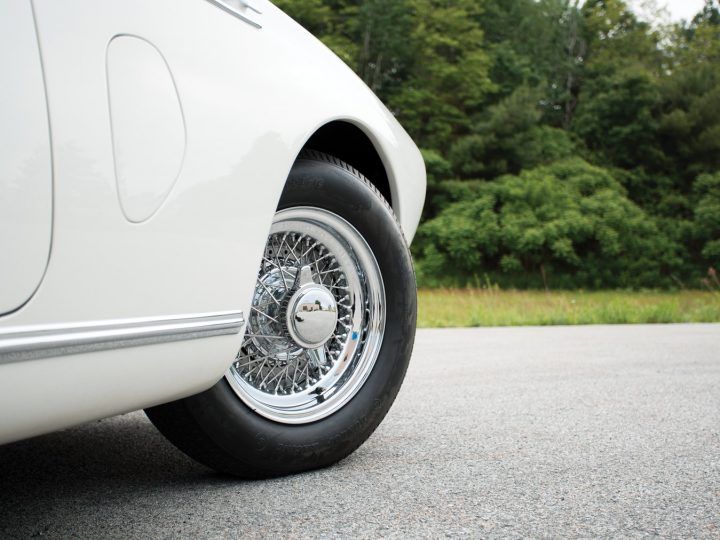 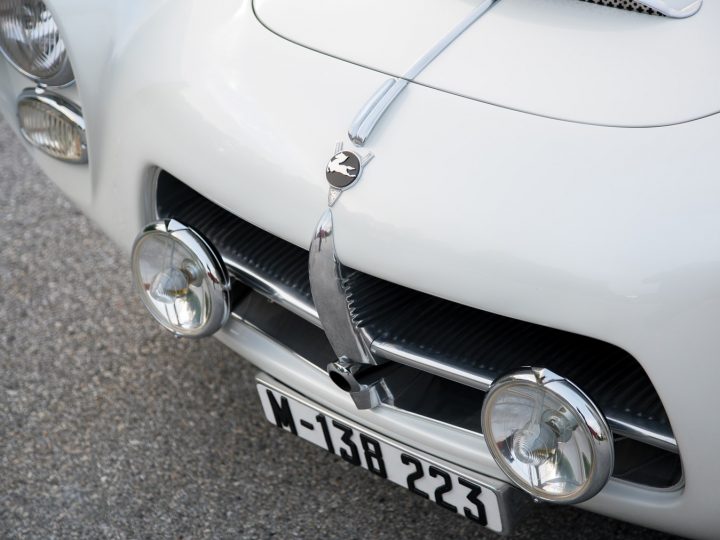 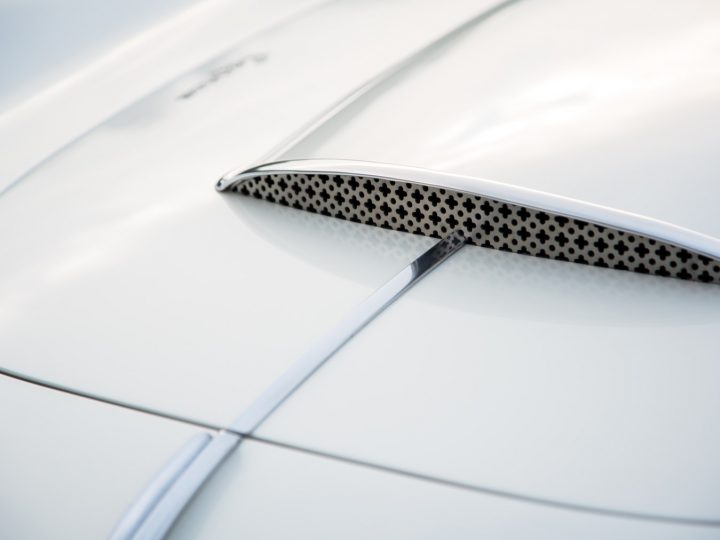 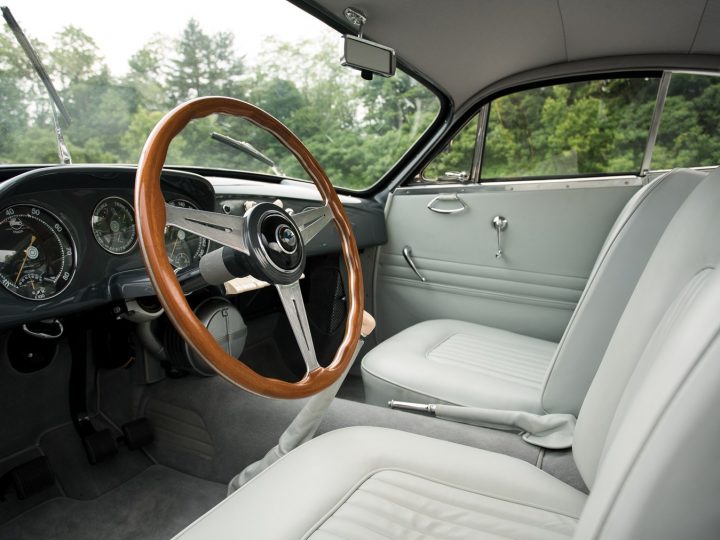 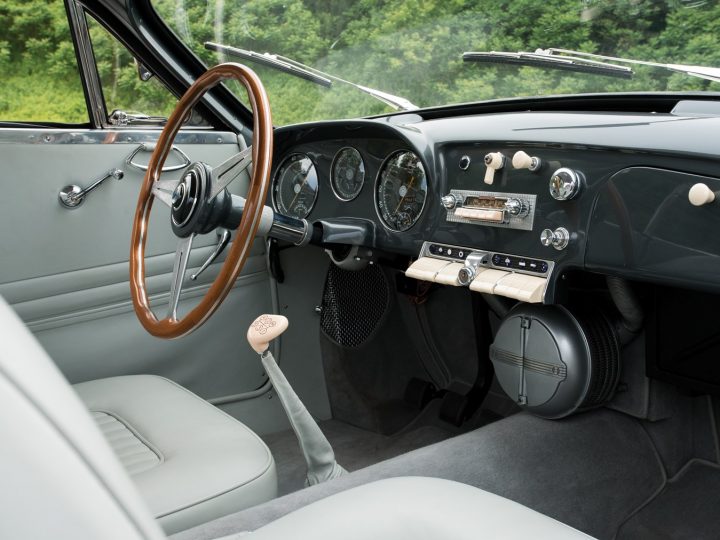 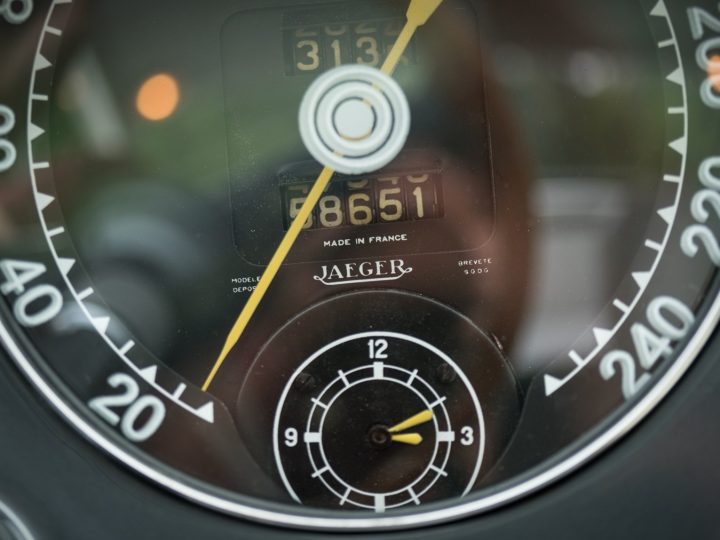 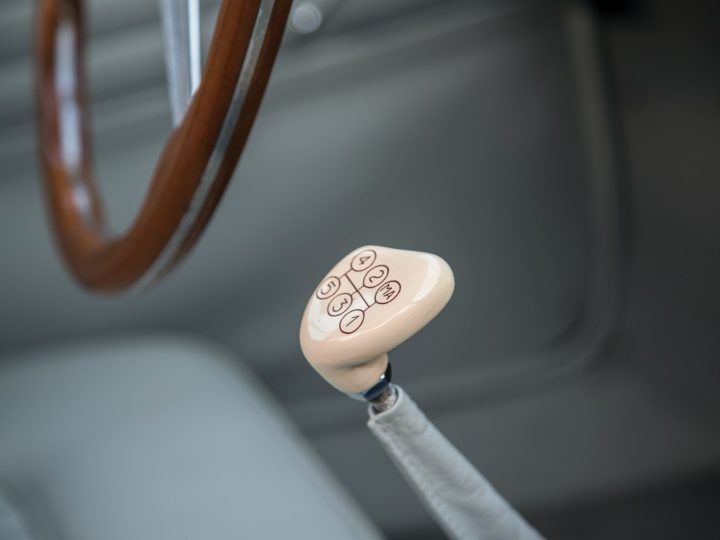 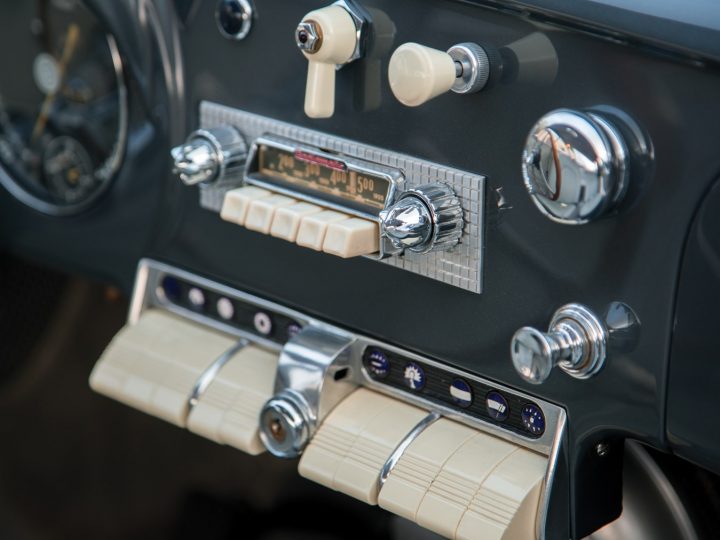 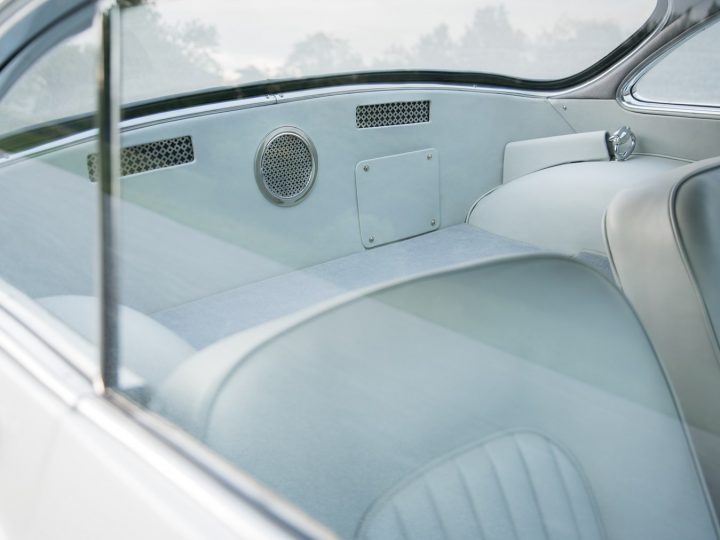 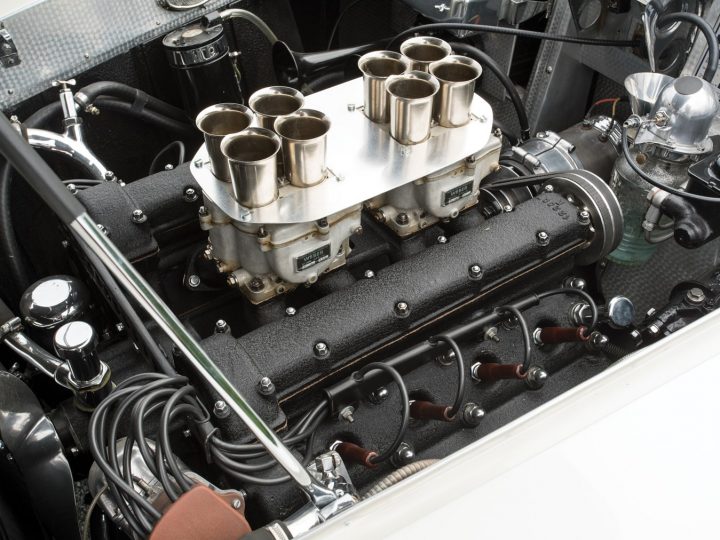 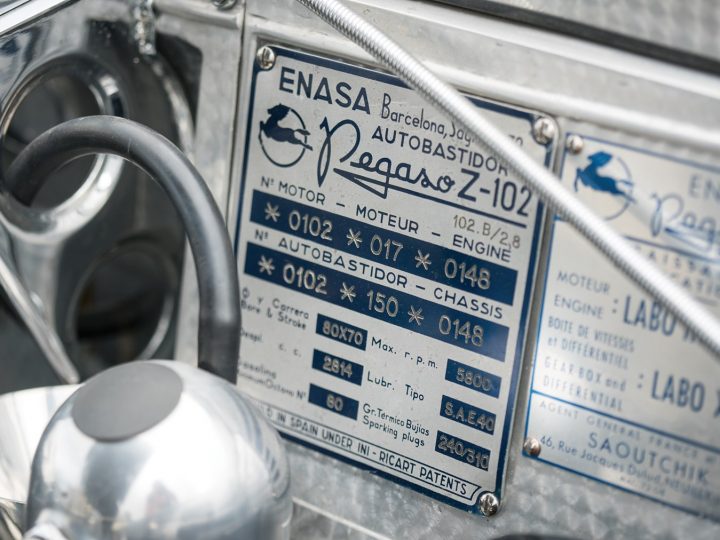 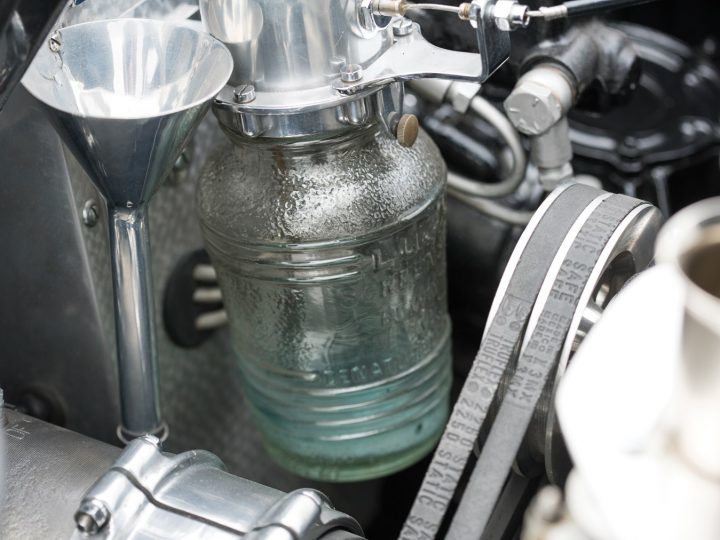 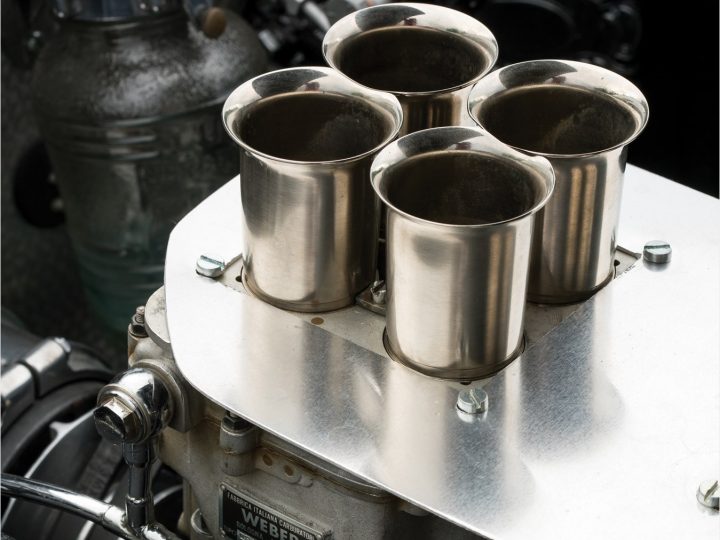 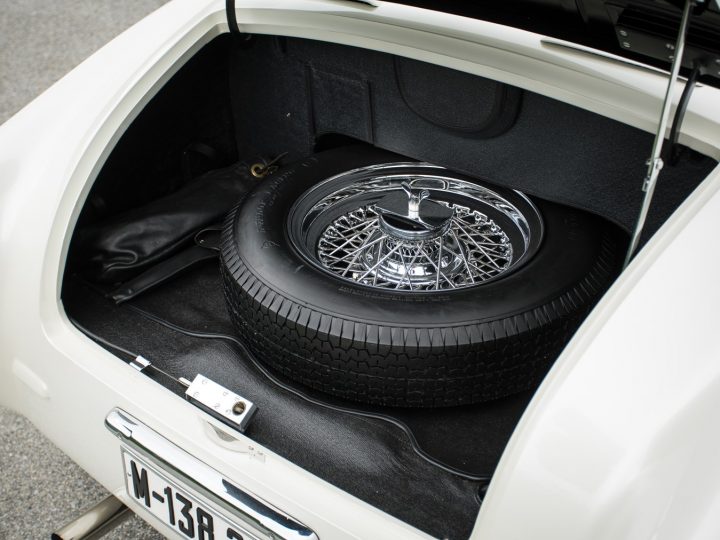