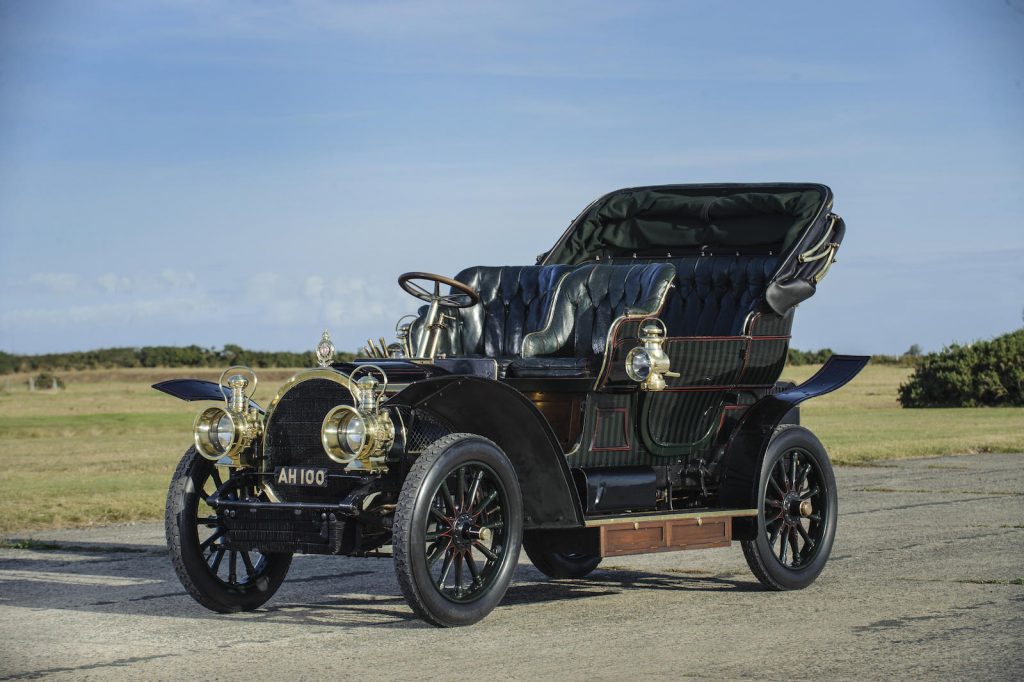 ‘In effect, the steam car in France meant Serpollet and to the connoisseur Serpollet was to the steam car what Lanchester, Bugatti, Maybach or Lancia were to the petrol car…. Of the three principal steam cars of the Edwardian period Serpollet was the most advanced in the scientific sense; next to it in ingenuity and engineering refinement comes the White, but those who have driven both give the preference to the French car not only because it provides so clever an answer to the engineering problems but because it is rather less heavy in hand than the American machine.’ – Lord Montagu and Anthony Bird, ‘Steam Cars 1770-1970’.

The late George Milligen was no ordinary Norfolk farmer. Born into a privileged family, his father being a successful industrialist, George’s decision to embark on a farming career was a bold one and from the outset he saw the advantages of mechanised farming at a time when the horse was still a most frequent sight on Norfolk farms. This foresight undoubtedly contributed to George’s success in his farming career and this in turn enabled him to indulge his passion for all things mechanical, provided that they intrigued his inquisitive mind. Around his East Ruston Manor Farm at Stalham, the mildly eccentric Milligen was a familiar sight in any one of his amazing collection of early motor cars, whether at high speed at the wheel of his 1929 Supercharged Mercedes-Benz SSK, tootling along in his 1909 AX Renault, or more spectacularly keeping the pressure up on one of his steam vehicles. His collection of the latter embraced not only the 1896 Salvesen Steam Cart, now such a regular sight on Brighton road, the 1909 15hp White Steamer and this highly spectacular London to Brighton-eligible Gardner-Serpollet.

Léon Serpollet had developed his multi-tube flash boiler in 1888, significantly advancing steam vehicle technology and efficiency. With backing from fabulously wealthy American Frank Gardner, who had built his own petrol-engined cars in Paris between 1898 and 1900, Serpollet was to spearhead steam car production in Europe. Early in the 20th Century, Serpollets were making their mark in the great Continental City-to-City races, establishing a reputation for reliability, if not for winning speeds. In the Paris-Vienna Race in 1902 all five Serpollet cars entered completed the 615-mile race. In that same year Serpollet took the World Land Speed Record at just over 75mph and in hill climbs its cars proved to be formidable competition. In 1904 Serpollet introduced the Type L, designed more in line with the then current convention. The boiler remained at the back of the chassis while the four-cylinder engine was placed longitudinally under a bonnet at the front behind a large circular condenser with the appearance of a petrol-engined car radiator.

The history of this car prior to 1946 is not fully recorded but during the war the fact that it would run on paraffin and not on rationed petrol meant that it could be used regularly for journeys of up to 50 miles per day. In 1946 it was in the ownership of one H Garrett-Adams (see Lot 205), passing in 1949 to Paul Fotheringham-Parker of Portman Square, London. In 1950 the car passed to Alec Hodsdon, steam guru and harpsichord maker of Lavenham, Suffolk, who also owned a 1900 Gardner-Serpollet previously belonging to the aforementioned Garrett Adams. In 1957, a relatively youthful George Milligen purchased this car from Alec Hodsdon.
George’s own notes record: ‘Car no: L1O13 Engine no 1013 coach body tulip phaeton 5 seater by Kellner. Acquired from Alec Hudson from Lavenham in Suffolk for £450 in 1957. AH 100 alloted by request in 1959. Heating of burner from cold by calor gas instead of methylated spirit.’

Milligen campaigned this car actively in the 1950s and 1960s, and fitted a new generator incorporating stainless tubes. A new water tank was fitted in 1960 with an increased capacity of 24 gallons and therefore giving a total water capacity of 34 gallons. Milligen ventured furthest from home in 1959, participating in the VCC Scottish Rally that year in the Gardner-Serpollet. The Serpollet was described as steaming strongly through the Trossachs, with Milligen on occasion delighting in his own personal pyrotechnic displays to the consternation of other competitors but to his personal great amusement. It was on that Scottish Rally, starting in Edinburgh and finishing in Glasgow, that Milligen visited the collection of John Sword at East Balgray Farm, near Kilmarnock, little knowing that from the two subsequent Sword Collection sales in 1962 and 1965 he would add significant cars to his own collection. ‘AH 100’ now has that fabulous patina that is only acquired from careful attention over 50 or more years in single ownership. Clearly it was a highly original car when it came into Milligen’s ownership, and that originality has been carefully respected.

The car was officially dated 1904 by the Veteran Car Club on 26th June 1950 (Dating Certificate No. 908). That dating relied on the knowledge that this model was introduced in 1904. Serpollet records which have subsequently come to light suggest that this car, although being the 1904 model, was in fact manufactured in 1905. The Dating Certificate records the fitting of a White two-speed rear axle, presumably work carried out by Hodsdon to enhance the car’s performance. During restoration it was discovered that this ‘improvement’ was anything but, so an exact replica of the Serpollet item, from the original Serpollet drawings, was commissioned, resulting in a top speed of over 45mph at reduced revs. The stainless steel boiler tubing as fitted by Milligen did not produce the intended heat and was replaced by a newly-made steel tube boiler capable of producing temperatures of more than 900 degrees Fahrenheit.

The coachwork is liveried in vertical green and black striping (peculiarly referred to as Dutch Pink), with fine red coachlining. Forward illumination is provided by an outstanding pair of Polkey oil headlamps with Powell & Hanmer oil side lamps. Dashboard equipment includes a fuel tank pressure gauge, fuel burner pressure gauge and the essential steam pressure gauge to monitor ultimate performance. The car is a delight to drive and is completely self-regulating due to the Donkey pump system as can be seen from the accompanying video.

Like all cars from the Milligen Collection, the Gardner-Serpollet comes with a detailed notebook. George recorded all trips from 1959 to 1963. It is noted that the car participated in the London to Brighton Run in 1984, 1985, 1986, 2010, 2011, 2012 and 2013, finishing every time save in 2011 when the crankshaft broke. The failure was discovered to be a direct consequence of the installation of the White back axle. It has subsequently been replaced by a crankshaft made according to original factory drawings but with the added improvements of modern materials and hardening processes. With its London to Brighton Veteran Car Run history and its previous VCC dating, this car qualifies under present rules for ‘Grandfather Rights’, enabling it to participate in London to Brighton Runs.

Time moves on and with some reluctance this fine French steam car now comes to the open market once more. This is the only surviving shaft drive Serpollet and only one other Type L – a chain drive version – survives in long-term captivity in The French National Motor Museum at Mulhouse. Here is a well-known and distinctive steam car, featured in Georgano’s Encyclopaedia, Bird and Hutton-Stott’s ‘The Veteran Motor Car Pocket Book’ and many other motoring publications. Few contemporary cars have the presence or performance of this steam car and opportunities to acquire cars of this significance rarely arise. ‘AH 100’ has been housed on the Isle of Man with respected steam engineer Chris Wedgwood who has returned the car to its original appearance, performance and reliability, Chris will be available to make the run with and/or tutor any purchaser with its operation and ongoing maintenance. It is offered with a copy of the VCC Dating Certificate; a V5 registration document; an old-style buff logbook; other related documents and photographs; various notes on steam cars from Milligen’s files; the aforementioned notebook; and the all-important George Milligen provenance. A box of Gardner-Serpollet related items can be collected by arrangement with the vendor. The car is registered for this year’s Regent Street Concours d’Élégance as well as for the London to Brighton Run. It was awarded the distinction of historically most important car in the London to Brighton Run in 2010.