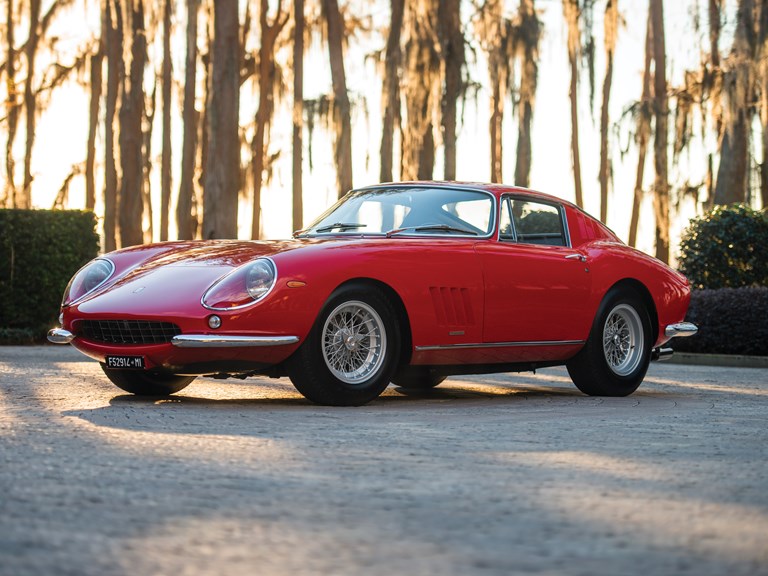 Replacing Ferrari’s legendary 250-series GT racers would be a difficult task for the engineers at Maranello. Coming off of numerous wins at Le Mans, the Tour de France, Sebring, and Daytona, the quartet of the 250 GT LWB berlinetta, 250 SWB, 250 LM, and the 250 GTO were quite simply some of the finest sports cars the world had ever seen.
The 275 platform provided a great starting point for Ferrari’s continued competition success, boasting near perfect weight distribution. The first 275 GTBs built especially for competition were three lightweight 275 GTB competition speciales, which were graced with 250 LM dry-sump racing engines in order to try the model’s hand in competition. One such example managed a spectacular 1st in class and 3rd overall at the 1965 24 Hours of Le Mans, incredible for a GT-class car dueling with sport prototypes.
This success inspired Ferrari to launch a new model in 1966, dubbed the 275 GTB Berlinetta Competizione, or 275 GTB/C for short. This was built around a new chassis, internally designated Tipo 590A, which was fitted with reinforced wheel hubs and was both stronger and lighter than the standard 275 chassis. Other specific components included an outside oil-filler cap on the top of the passenger-side front wing and reinforced Borrani wire wheels shot with Dunlop Racing tires.
The 275 GTB/C’s engine was also all new, designated Tipo 213/Comp, which was developed from a Works car that campaigned in 1965. The engine block itself received extra reinforcement in the form of external ribs, and the casings of the sump, timing chain, cam cover, and bell housing were built in Elektron, much like the other Ferrari competition models. The engine was also fitted with high-lift camshafts, reinforced pistons, a unique crankshaft, and special valves, including dry-sump lubrication. Finally, aluminum bodywork hand crafted at Scaglietti clothed each chassis and engine, making for a car just as gorgeous as it was competitive, shedding precious grams over the standard steel coachwork.
Production on this 275 GTB/C, chassis no. 09067, began in the Summer of 1966. The car was sold to its first owner on 16 August. Rather than being sold to a racing team, it was sold to a private company, Editoriale Il Borgo di Luciano Conti e C. S.a.s., of Milan. The owner of this company, Luciano Conti, was a favored VIP customer of Ferrari and had previously owned an alloy-bodied 250 GT SWB Competition, a 250 GTO, and a variety of Ferrari road cars. Registered for use under a Bologna registration number, BO 279382, Conti was well connected within the Italian racing scene and he reportedly provided this car to the developing racing driver and future Scuderia Ferrari team driver Arturo Merzario for a period of time. In March the following year it was sold to Enrico Tronconi of Milan and was subsequently reregistered under the Milanese number MI F 52914.
Interestingly, 09067 would not be raced until it was acquired by its third owner, Vito Figlioli of Milan, in 1969. Its first event was at the Colle San Eusebio hillclimb with Cesare Marchesi, wearing race #156. A picture of the car in the event was featured in the 1968-1969-1970 Ferrari Yearbook, in the section “The Privateers Who Win.” It also appeared at the Castell Arquato Vernasca that same year, where it also took victory.
Passing through one more Italian owner, the 275 GTB/C left Italy in 1973 when it was purchased by Paul F. Schouwenburg of the Netherlands in trade for his 212 Inter Touring Berlinetta. Schouwenburg brought the car to Pierre Bardinon’s Mas du Clos race track at the Club Ferrari France meeting in October 1973, where it was raced wearing #45. Two subsequent Dutch enthusiast owners enjoyed the car at a variety of events in England and mainland Europe for the next two decades.
Purchased by a well-known collector in 1995, chassis 09067 was registered in the UK and with this owner, it was frequently used for vintage rallies and tours, including numerous outings in the Tour Auto. In addition, it made an appearance at the 40th anniversary of the Ferrari 250 GTO reunion in 2002 and attended the 275 Anniversary Tour in 2004. Appropriately, it was regularly maintained during this time by the UK-based specialists at The Light Car Company. During this period the car also received Ferrari Classiche Red Book certification, confirming it still retains its fully matching-numbers drivetrain and bodywork.
After its acquisition by the current owner, 09067 was immediately shipped to Mark Allin’s Rare Drive of East Kingston, New Hampshire, where it was fully restored to as it was when it left the factory. The car was found to retain an overwhelming amount of its original mechanical components, rare for a car raced in period, and proved to be an excellent basis for a show-quality restoration. Following its completion, the car was shown at the 2017 Pebble Beach Concours d’Elegance, celebrating Ferrari’s 70th anniversary. Furthermore, it was shown at the 2018 Cavallino Classic, where it earned a Platinum Award, and won further awards at both the Hilton Head Concours d’Elegance and the Trump Charlotte Concours d’Elegance later that year. It is important to note that the car comes with a complete set of tools, as well as an extra set of Borrani wheels with Dunlop tires, as the car would have been originally delivered.