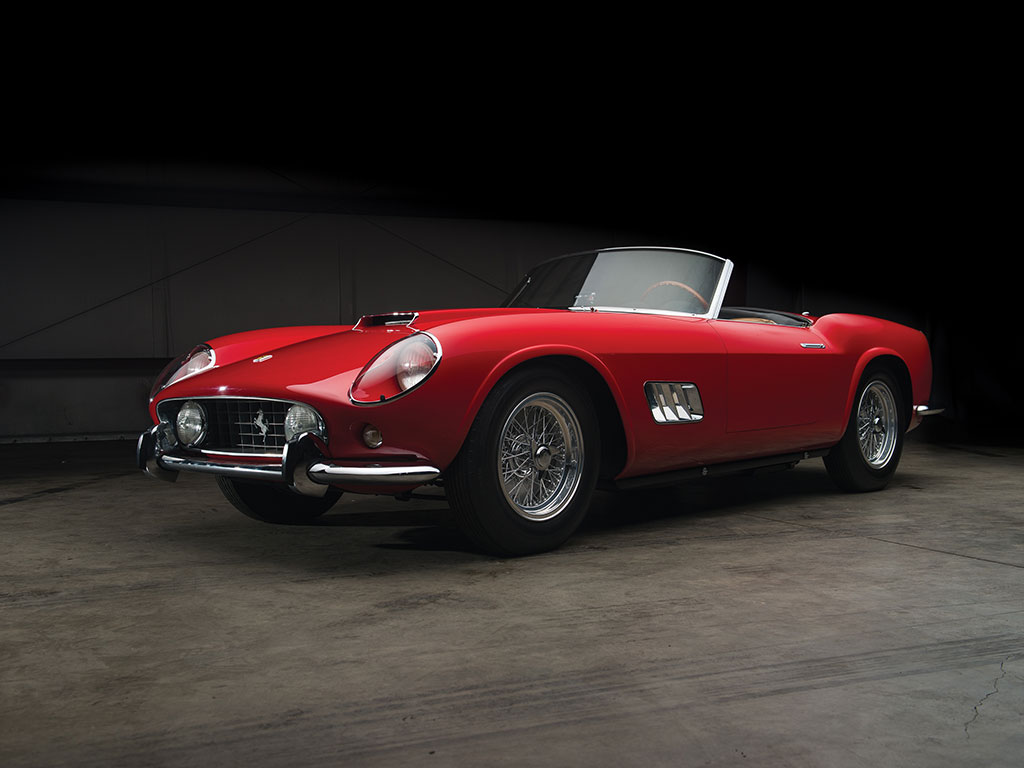 The chassis for 1503 GT, the 35th of 50 LWB California Spiders, was supplied to Scaglietti on 7 July 1959, and the car’s assembly completed in early October. It was delivered the following month to official importer Carlos Kauffmann of Caracas, Venezuela, in an era when that country’s oil fortune was making its upper crust extraordinarily wealthy, and supplying Mr Kauffmann with numerous customers for bespoke coachbuilt Ferraris.

In Dr Otto Rodriguez Vincentini, a young socialite active in the high society party scene of the late 1950s, Kauffmann found an ideal buyer for the California Spider. With factory covered headlamps, no side marker lights and its Nardi steering wheel, glistening in Bianco over Nero, it fairly dripped aggressive power. One can imagine the figure that it cut, cruising through the streets of Caracas as its owner visited all of the most happening nightspots. However, it was on one of those evenings, and one of those darkened streets, that young men fled, leaving behind the idling California Spider, with the late owner – a victim of robbery – behind the wheel.

The car returned to Carlos Kauffmann, was repaired and reconditioned, and in 1963 was sold from Venezuela to Arthur Dennis Stevens of Evanston, Illinois. At the time it was imported into the U.S., the car had reportedly only covered 7,500 km. Stevens opted to drive the California Spider periodically between Evanston and Chicago for a few years before it was stored for two decades in suburban Chicago. Then, in 1985, it was sold to well-known Ferrari collector Richard Freshman of Malibu, California, then showing around 31,000 km. Two further short-term owners followed before the car was acquired by L. Jack Ruscilli of Columbus, Ohio, in 1987.

Mr Ruscilli commissioned a full restoration of the California Spider by the late Wayne Obry of Motion Products in Neenah, Wisconsin. As part of this work, the car was carefully brought back to its original delivery configuration, with the exception only to a change of colours, to Rosso over tan leather. The restored car toured the United States for several years, winning virtually every possible award, including Best in Class at both the Meadow Brook and Pebble Beach Concours in 1988, and Best of Show at the FCA National Concours in 1989. It was pictured in Stanley Nowak’s Ferrari Spyder California in 1990, and in issue number 53 of Cavallino, as part of a prominent feature story, ‘California on Tour’. In total this car collected more than 35 concours awards between 1988 and 1992, attesting to the incredible quality of the original Motion Products restoration, which helped raise the bar for all Ferrari restorations since that time.

The current owner acquired the car in 1998, and since then it has been properly stored in his private collection and very seldom shown; indeed, its only appearance was at the XII Palm Beach Cavallino Classic in January 2003, where it won a Platinum award. Today it is offered for a new round of show appearances and potential rally enjoyment, accompanied by a complete tool kit, a binder of restoration photography and a radio. Its odometer shows 32,586 kilometres, only about 700 more than when Mr Ruscilli acquired the car in 1987!