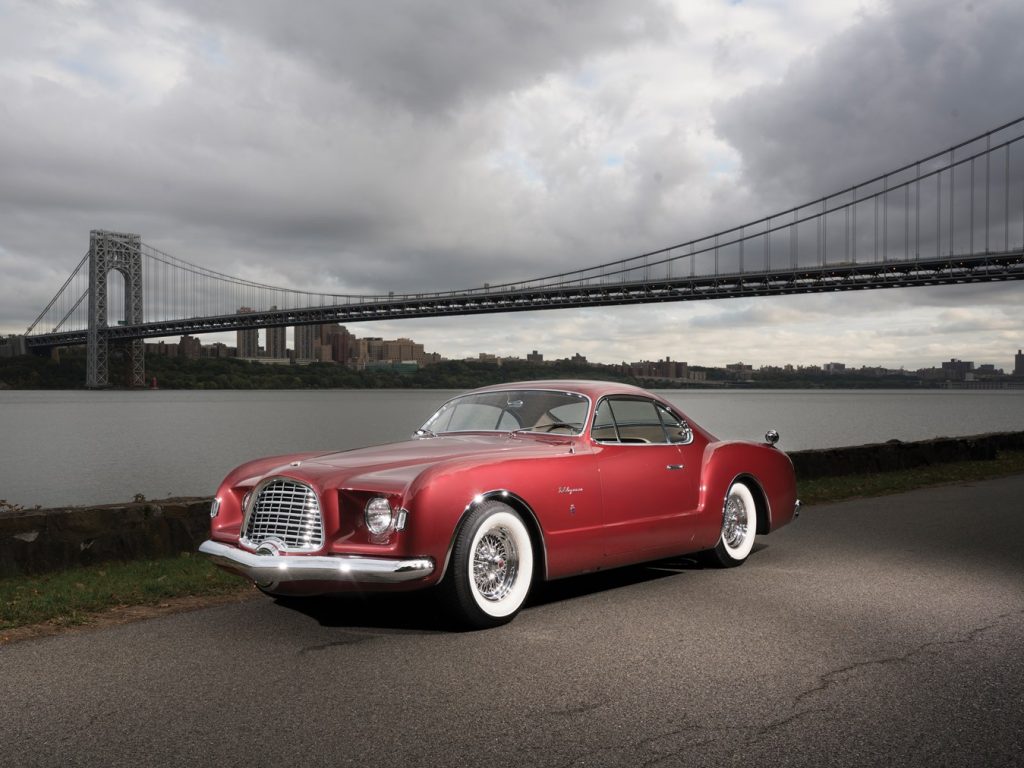 It all began over dinner, a meal shared in 1949 between C.B. Thomas, head of Chrysler’s export division, and “Pinin” Farina. The two decided to collaborate on a custom 1950 Plymouth for the show circuit. No doubt to Farina’s consternation, however, Chrysler elected to hedge its bets by shipping to Europe two chassis: one to Pinin Farina, and the second to its competitor Ghia. Even more frustrating, it was Ghia that won the day with unmistakable European flair added by Mario Boano to Chrysler’s own design suggestions. From that point on, as far as Chrysler prototypes were concerned, the decade belonged to Ghia working in conjunction with Chrysler’s revolutionary chief of design Virgil Exner.
The collaboration can be separated into two periods: before and after the D’Elegance, which was the last design to come out of Exner’s home studio. The 1952 showpiece was the final iteration of a theme that had originally been created for the 1951 K-310 show car and rapidly evolved through several other prototypes, all of which shared distinctive, muscularly tailored fender and roof lines, as well as the outline of a “continental” spare in the rear deck.
Suiting these proportions, the D’Elegance was built on a New Yorker chassis that had been shortened by 10 in.—to 115 in.—providing an interior with two comfortable armchairs facing a unique instrument panel with six large gauges. It was outfitted with both power steering and windows, as well as Ausco-Lambert self-energizing disc brakes.
Subsequent to the D’Elegance, Virgil Exner’s dramatic flair would become much more exuberant thanks to the influence of his fellow stylists at Chrysler, resulting in towering tailfins and exaggerated, dramatic shapes. While the D’Elegance kept the restrained Italian elegance of the earlier Exner-Ghia designs, its creator’s increasing confidence was clear in the free-standing headlamps fit into curved nacelles—an intentional throwback to the 1930s—as well as the “gunsight” taillights, an extensive use of chrome trim, a bold egg-crate grille, and glistening ruby red metallic paint. His fascination with wild technology also exhibited itself in the rear deck lid, which actually carries a full-size spare; touching a switch activates a complex hydraulic system that raises the lid and hydraulically lowers the spare down to the ground.
It is enjoyable for the Chrysler enthusiast to step around the D’Elegance and pick out the features that translated to future Chryslers; the famous 300 “Letter Cars” adopted the grille, while the taillights appeared on the 1955 Imperial. The most significant legacy of the D’Elegance, however, does not involve Chrysler at all. Ghia’s Giovanni Savonuzzi was entranced with the design to the point that he downsized it for several unique Alfa Romeos and, in 1955, for the Volkswagen Karmann-Ghia. Indeed, the D’Elegance is the only Chrysler-Ghia “Idea Car” that had a clear, lasting influence on at least three different chassis and saw nearly direct translation of its lines to production automobiles.
“The D’Elegance,” Virgil Exner Jr., recalled in 2011, “was one of my father’s favorite cars.”
Following its show career, the D’Elegance was given to the brother-in-law of a Chrysler executive, as recounted by later owner Gordon Apker to author Stuart Leuthner. The new owner drove the car until 1987, at one point installing the present 1956-vintage 354 Hemi V-8, which provides 100 more horsepower than its original engine—a welcome addition, indeed.
The Blackhawk Collection subsequently acquired the car, where it was exhibited until 1999. At that point, it was acquired by Charles Cawley of MBNA, and then shortly thereafter passed to Mr. Apker, who had admired it during his childhood. After time in Ron Pratte’s collection, it was purchased in 2011 by the current owners, well-known and respected collectors known for their fine eye for style and elegance.
After its restoration was extensively freshened to a modern concours standard, the consignors displayed the D’Elegance at the Amelia Island Concours d’Elegance, winning top honors in a special class of Chrysler Concepts. Not just a showpiece, the one-off Ghia dream car was also driven through the Alps from Monaco to Venice as part of the Louis Vuitton Classic Serenissima Run.
Simply put, the D’Elegance stands in a class unto itself. It is the most significant surviving styling prototype from a legendary American designer, reflecting the purity of his lines and ideas at their very best and most passionately influential.