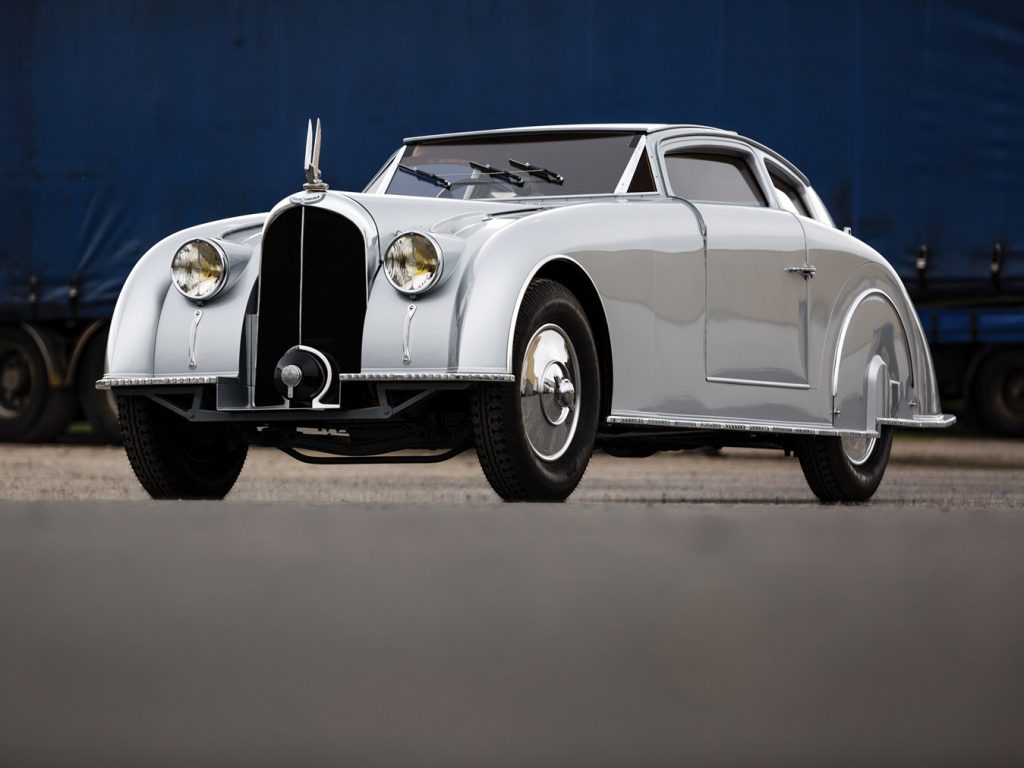 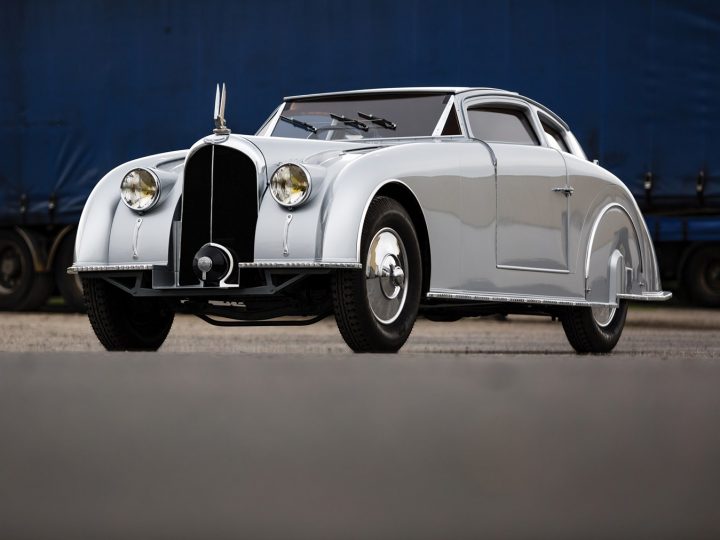 It was in the design of coachwork that Voisin himself shone. Although he had come of age with the airplane, he was not accomplished in aerodynamics as it is now understood. His mantra was simplicity, which expressed itself in flat sheets of aluminum, stark in their primitive beauty, and lightness of weight. By the mid-1930s his designs had evolved into an Art Deco vein, still incorporating aircraft-like features such as the “suspenders” that supported the front fenders from the radiator shell—a particularly Voisinesque bit of functional beauty.
Voisin’s masterpiece is considered the C28 Aérosport, a dramatic two-door berline, debuted at the 1935 Paris Salon. This radically innovative design exemplified Voisin’s guiding principles of aerodynamic stability and lightness in a thrilling body with a steeply raked windshield, a broadly curving roofline, and fenders that flow straight through to the tail of the car in an all-enveloping style. Low-slung and ultra-streamlined, the Aérosport is considered the first production full-width “pontoon” production body and is, for all purposes, the original gran turismo design, with power and comfort to spare. 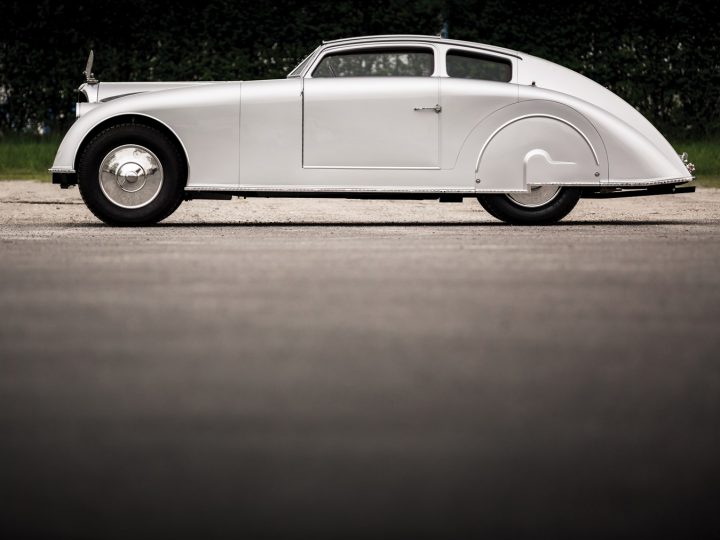 On the C28 chassis with its Cotal four-speed gearbox with electromagnetic clutches and overdrive, the car could reach a top speed in excess of 90 mph, while the Lockheed brakes ensured safe, smooth stops, and made it a delight to drive.
Unfortunately, this ultimate Voisin came into being at a time when the company that built it was financially strapped and nearing the end of its life. It is believed that some eight to ten examples of the Aérosport were produced. Of those, only two examples are known to exist. One, a well-known car that has appeared at many concours d’elegance over the years, is a long-term part of one of the world’s most significant private collections and is unlikely to ever become available for sale. 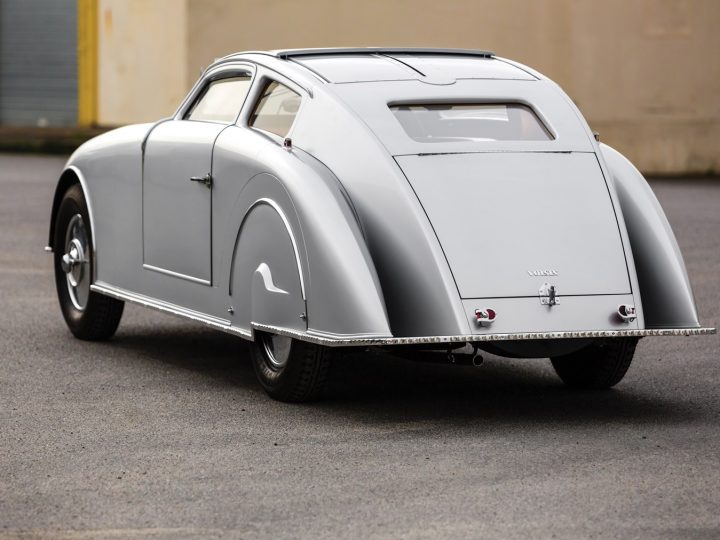 According to its current owner, a well-known Avions Voisin historian, authority, and collector who advises some of the foremost enthusiasts of the marque, the car shown here is one of the two prototype Aérosports done with this body style with thin front fenders, and may well be the very car displayed at the 1935 Paris Salon. He recounts that the original owner of the car drove it until World War II, at which time it was damaged in a bombing raid. Subsequently he commissioned Carrosserie Charles Duval, a coachbuilder in the Parisian suburb of Boulogne-sur-Seine, to replace what remained of the body with a conventional four-door sedan body, possibly removed from a Hispano-Suiza. In this form, the car was sold to a landowner in Brittany, who used it until its retirement in the 1960s. 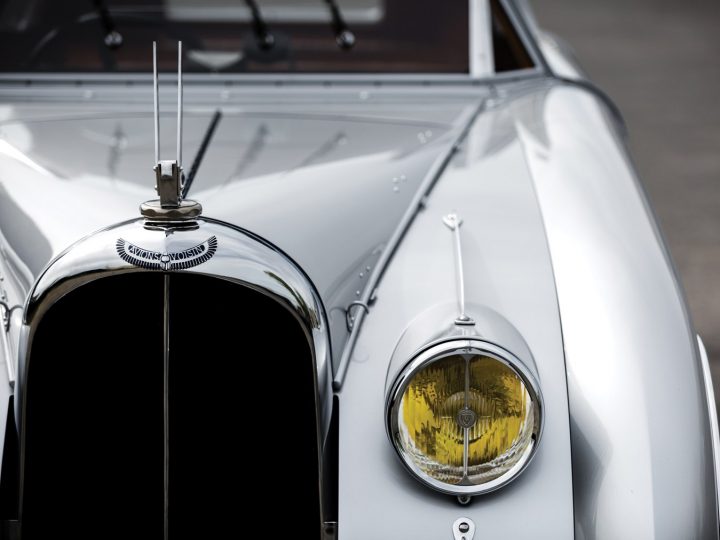 A collector acquired the remains of the car from the landowner’s property in 1980, but restoration work never commenced until its sale to the present owner in 1998.
Using his own records, the owner was able to establish the chassis’ provenance and, reportedly having acquired genuine Aérosport components from another collector, set about restoring the car to a high standard, working from original factory drawings and genuine parts. The restoration began in 2006 and took eight full years to complete to the original specifications.
The bodywork was most difficult to build, with very close panel gaps and no seals, resulting in a significant amount of time being spent in adjustments. Nonetheless it was expertly recreated and finished in an elegant metallic silver, and the interior trimmed by the renowned atelier Hermès of Paris in cuir vache vegetal naturel, the smooth untreated natural cowhide used in the 1930s, in a rich caramel-toned hue. Great care was taken to recreate the Aérosport’s original features, such as a hydraulically actuated roof that opens almost to the rear of the car, creating an almost convertible feel when open. The car has an overdrive on the transmission, for a shorter first gear, and a total of eight forward speeds and two reverse! 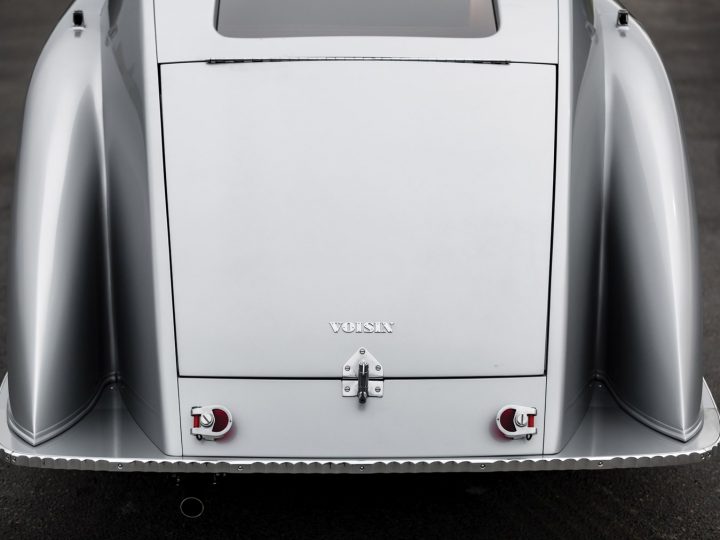 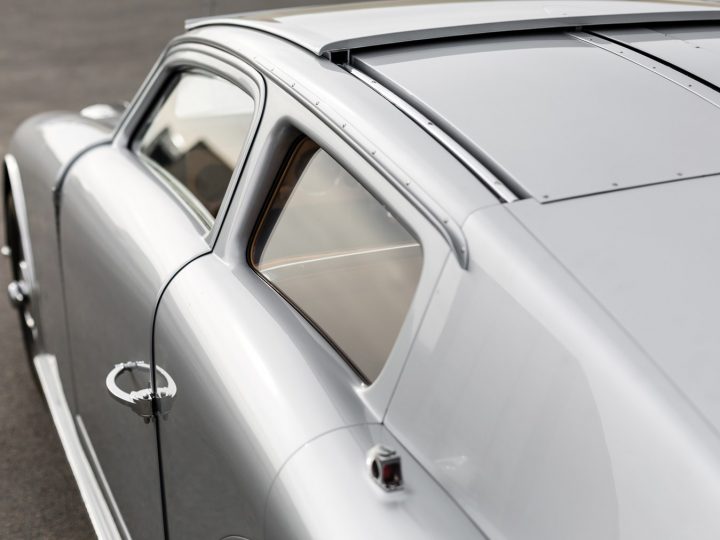 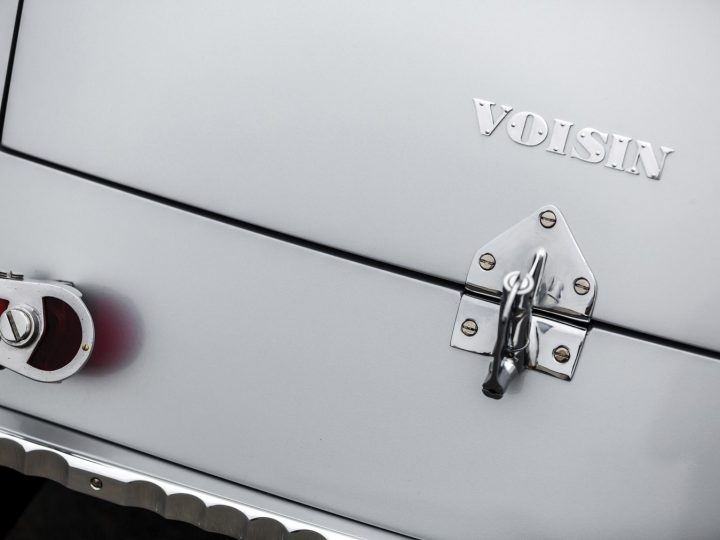 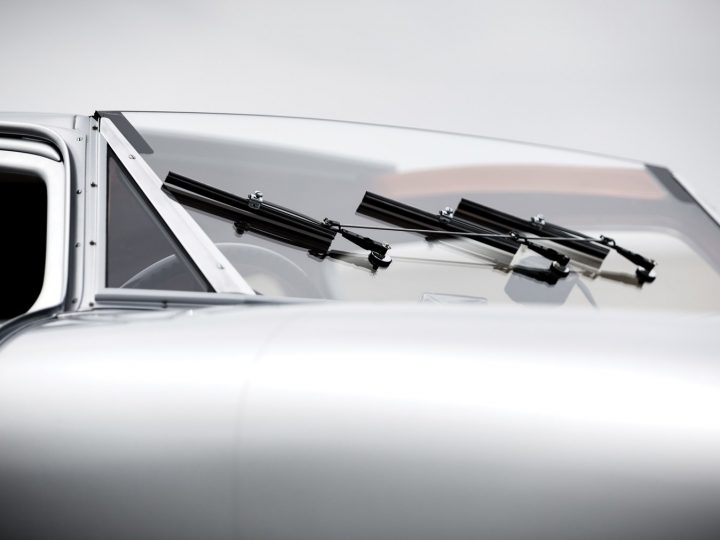 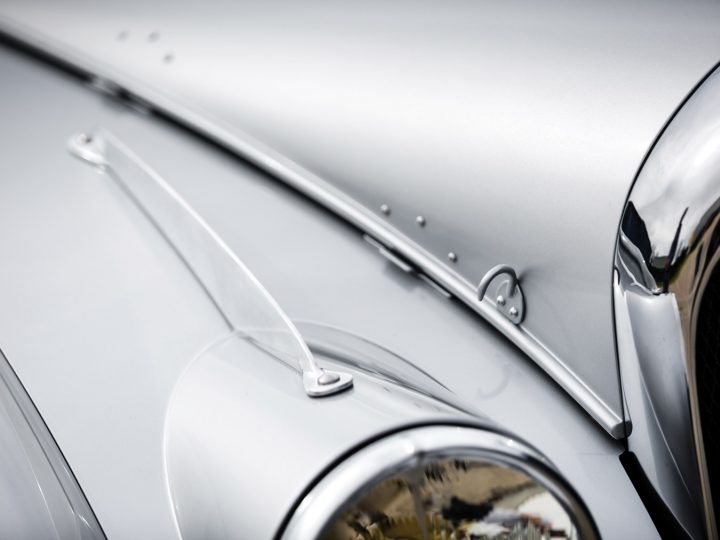 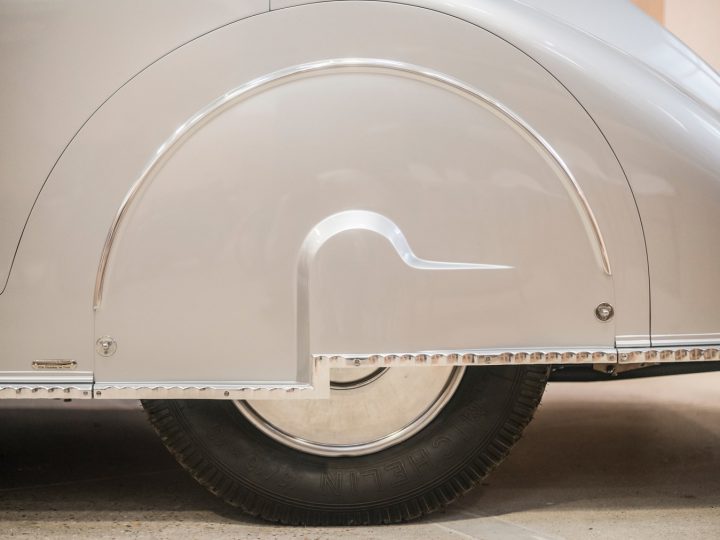 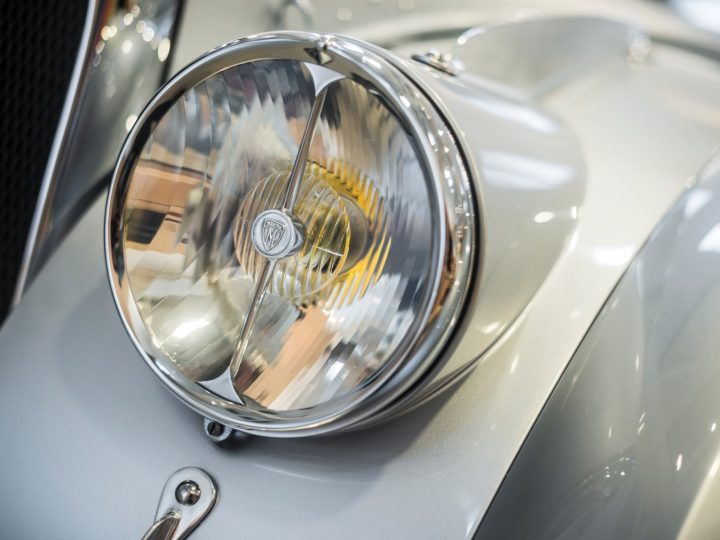 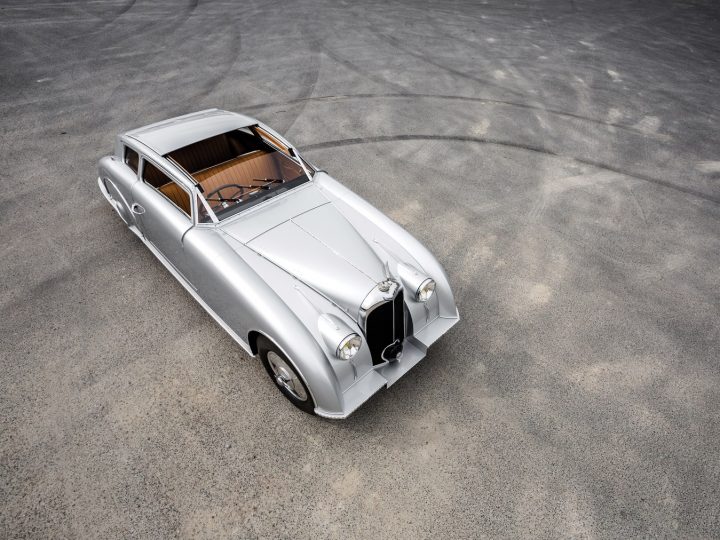 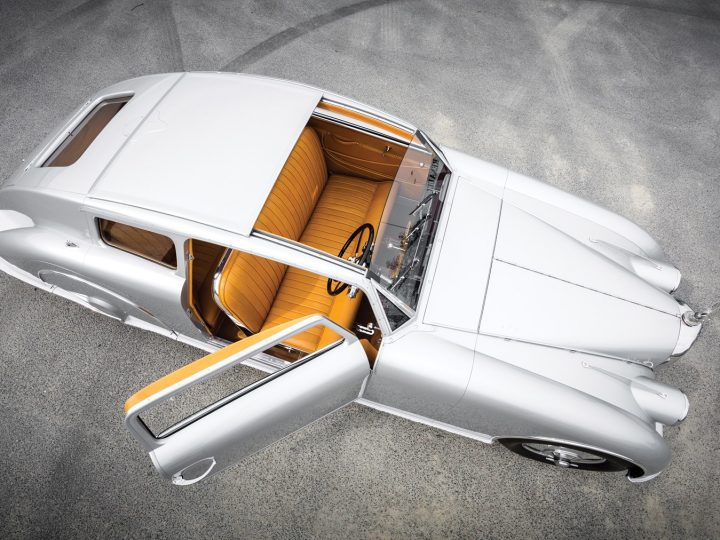 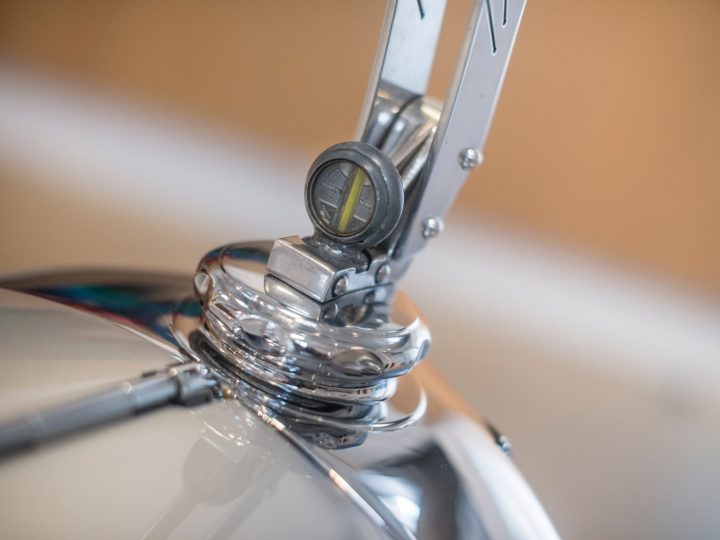 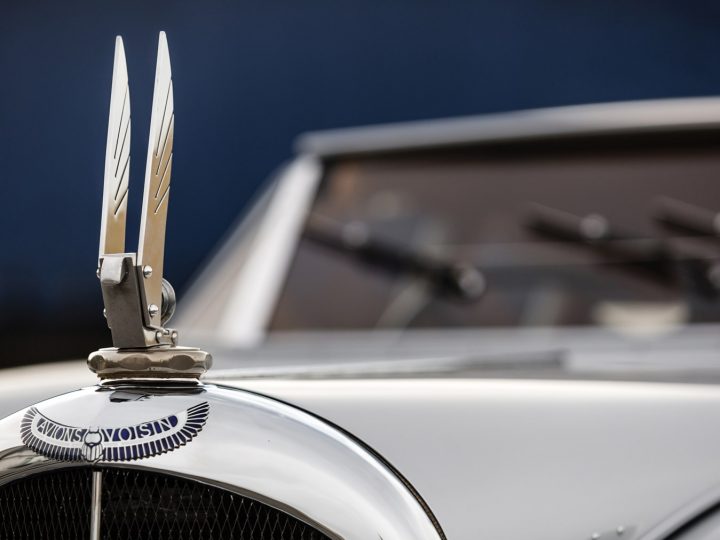 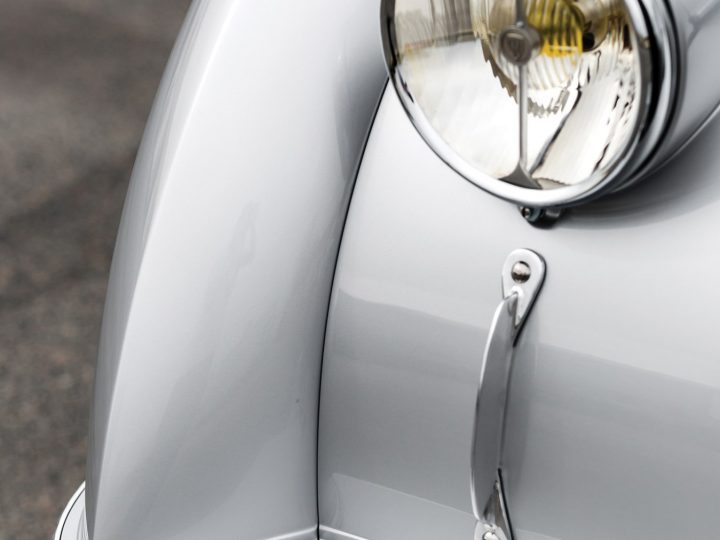 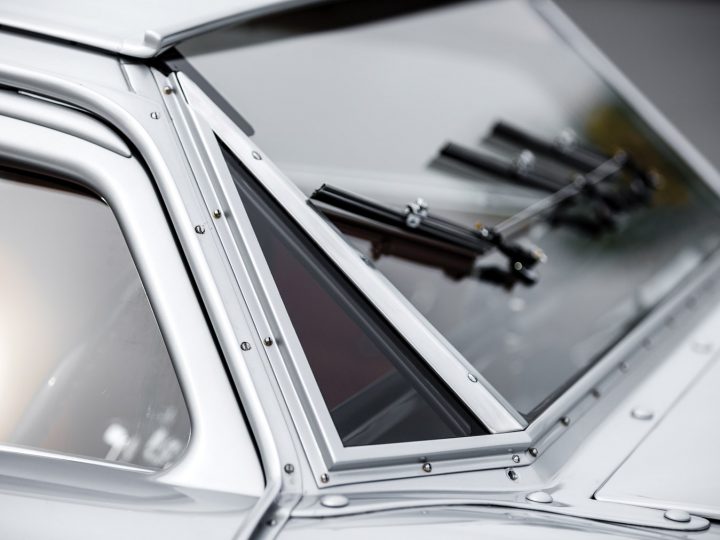 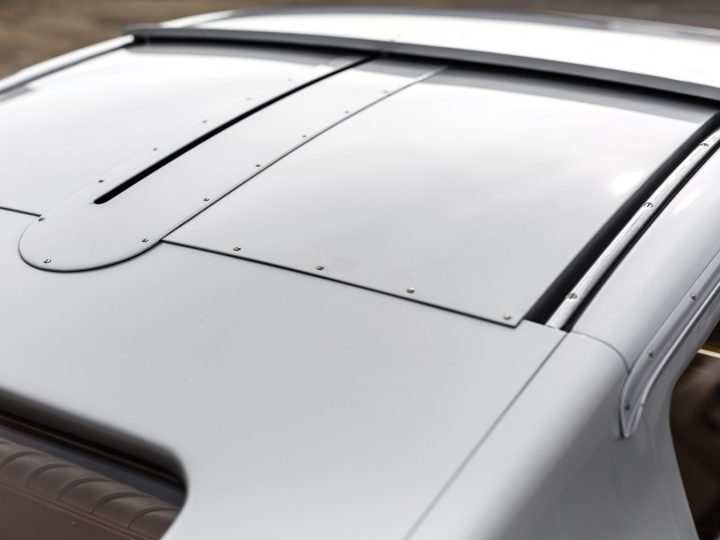 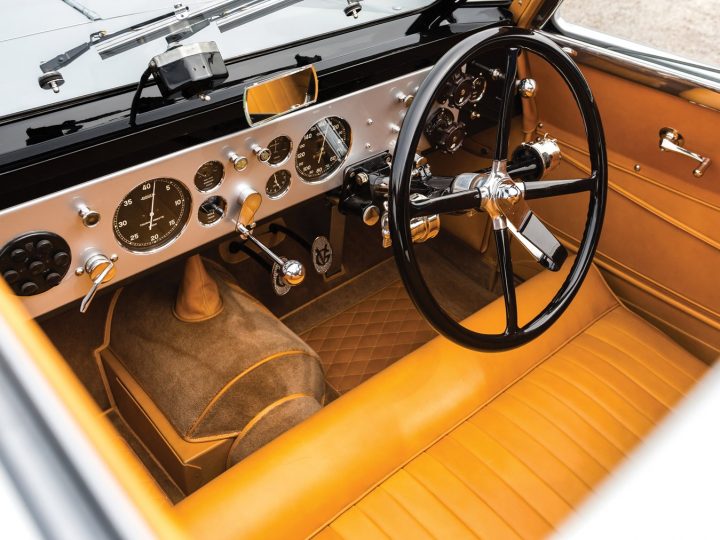 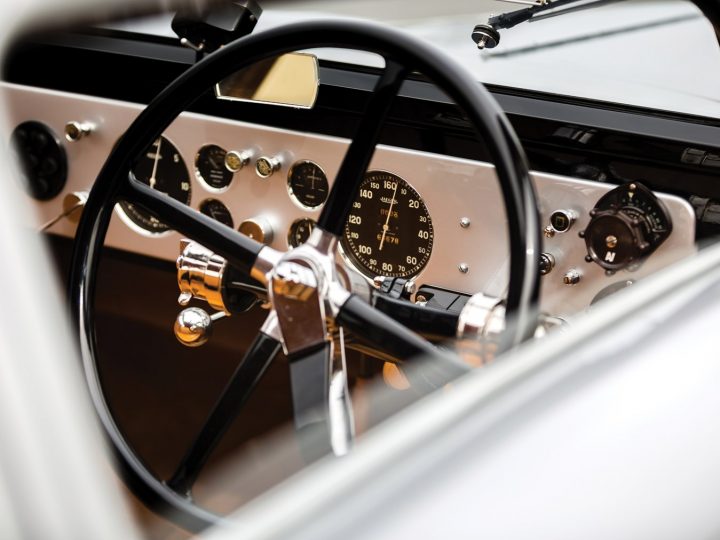 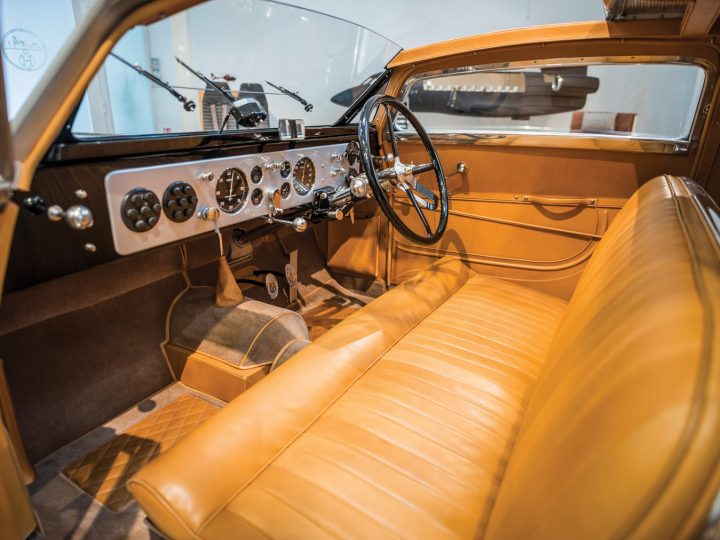 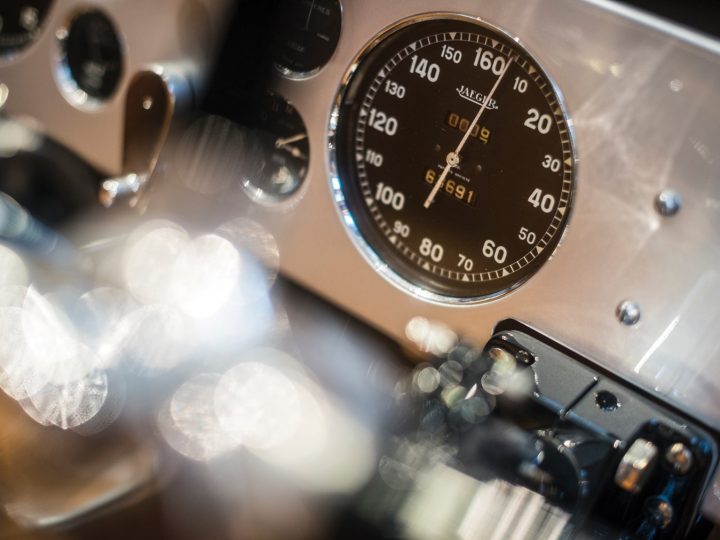 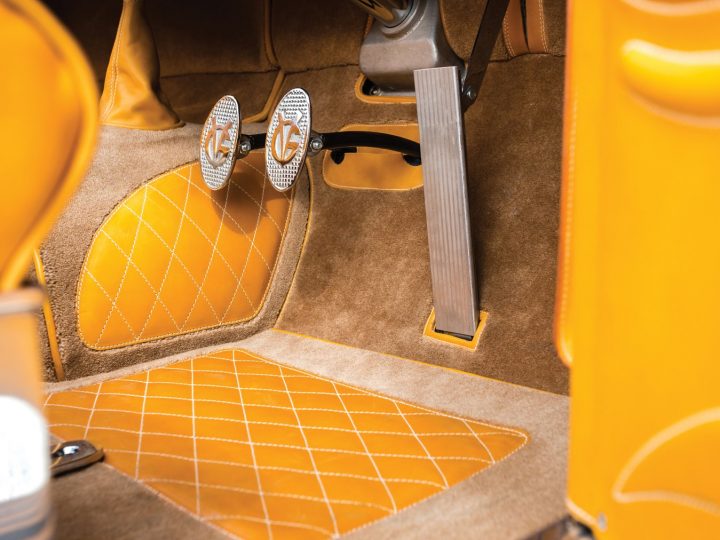 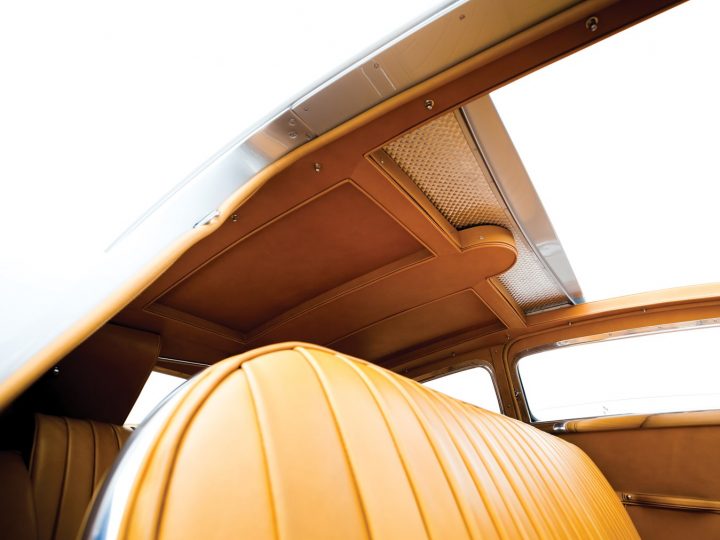 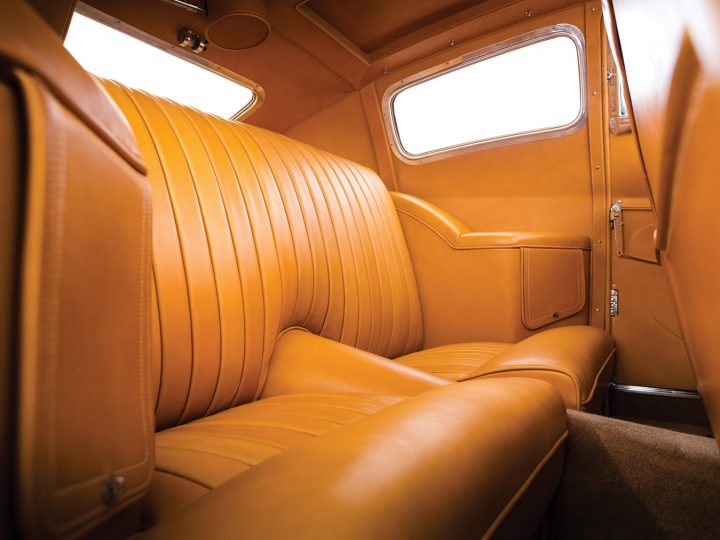 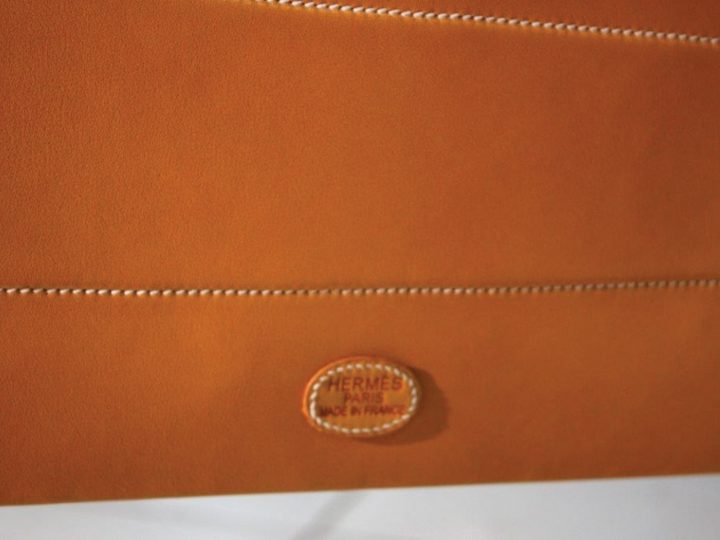 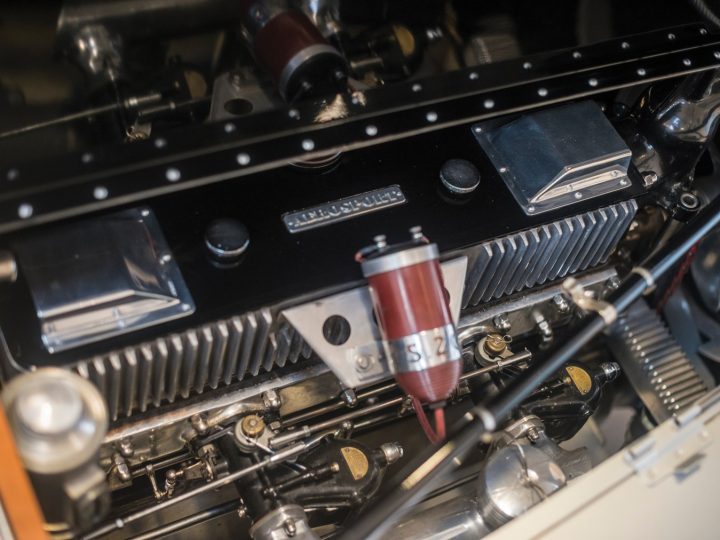