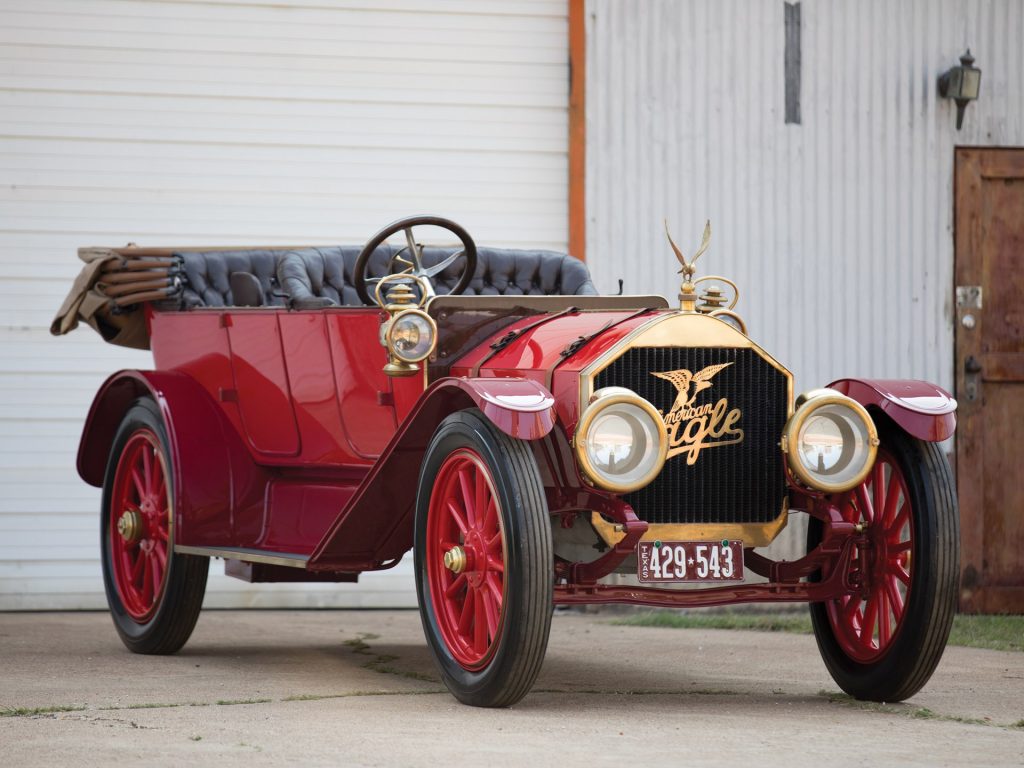 The name Eagle has appeared on many automobiles. American Motors’ all-wheel-drive model of that name was followed by a whole product line of AMC-Renault cars. Willys Motors, too, had an Aero Eagle model in the 1950s. The car offered here is related to none of these, but is instead a unique and one-off automobile, built by Martin Burzynski in Detroit, Michigan, in 1911.
Burzynski had patented the design for a novel tire that used aluminum sidewalls and spring-loaded canvas-and-rubber treads, backed by inflated inner tubes. In order to test his tires, Burzynski designed and built an entire car. He operated the Eagle Motor Car Company in Detroit and gave his vehicle the company name. He built his assembled car from readily available components: a Wisconsin 60-hp six-cylinder engine; Timken axles, bearings, and hubs; and universal joints from Blood Brothers Machine Company in Kalamazoo. The patented wheels were built for Burzynski by Turnbull Wagon Company in Defiance, Ohio. The result was a handsome seven-passenger touring car on a 132-in. wheelbase. Furthermore, there were few automobiles at the time that offered more than 60 hp, significant power in 1911.
Alas, the wheels proved to be a disappointment, as they bottomed out on deep ruts and gave a jarring ride, overshadowing the promised freedom from blowouts. After driving the car for a scant 224 miles, Burzynski laid it up and went on to other ventures. It remained with him, though, until his passing in 1946. The following year his widow sold it to famed Detroit collector Barney Pollard. The car was subsequently restored by Clyde Wade, known for his work for the famed Harrah’s Automobile Collection.