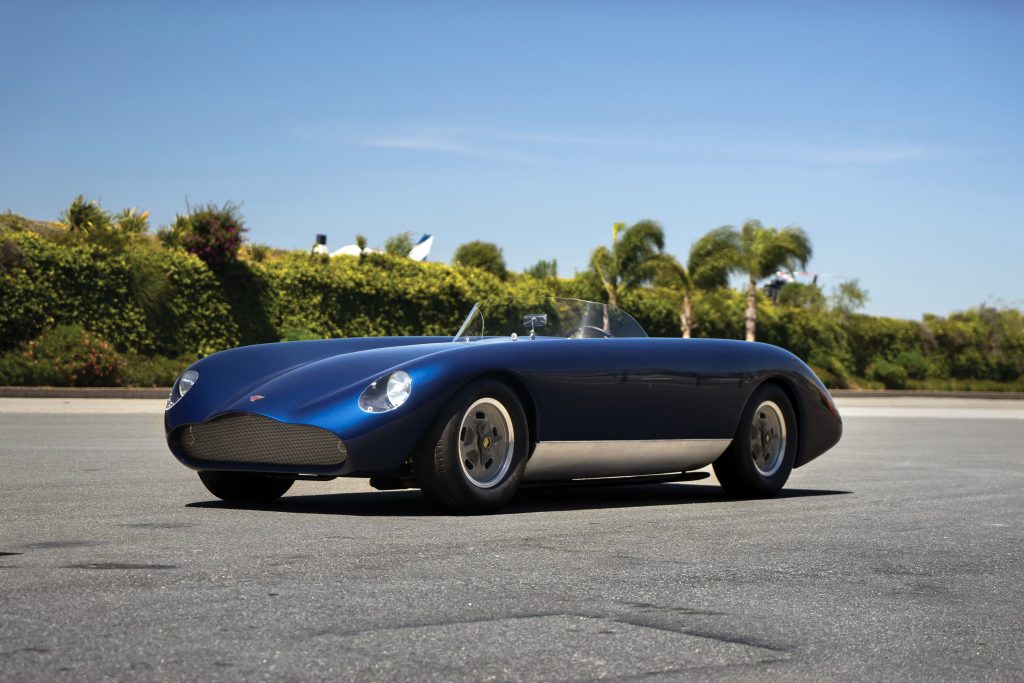 Bob Sorrell was one of the most talented automotive designers and builders of the 1950s and ‘60s. Working with his father from their shop on Felton Avenue in Inglewood, California, Sorrell Engineering had a hand in building some of the finest cars of the day. Tommy Ivo was so impressed with Sorrell’s skills that he hired him to build the aluminum bodies for both of his famed AA Fuel Dragsters; the Croshier-Baltes-Lavato and the Barnstormer.

Sorrell was a master fabricator and was comfortable working in a wide variety of materials, from aluminum to fiberglass and everything in between. Many of those who knew Bob have described him as a genius and his vast skill-set attracted customers from all areas of the hobby. Sorrell built and worked on road racing cars, drag racing cars, land speed racing cars, hot rods, custom cars, show cars and even fully-functional scale tether cars. The diversity of the projects that passed through Sorrell’s shop is a testament to his abilities and the confidence the SoCal car world placed in him. Unfortunately the diversity of his activities has diffused the legacy of Sorrell’s impressive accomplishments. Whereas Sorrell developed projects in so many areas, the yardstick of greatness most often rewards those with a more focused approach.

Sorrell built a string of gorgeous one-off alloy bodies for both competition and the street, but he is most well remembered for his outrageous fiberglass creations. His earliest cars were clothed in the wonderful SR-100 fiberglass roadster body. This design was a Sorrell original and owed nothing to the traditional body shapes being built in the early 1950s. Sorrell’s use of an envelope design and unified fender-to-body expression were just two major themes he explored. The SR-100 started life as an aluminum one-off which Sorrell mounted on a Kurtis-Kraft 500KK chassis. This car was premiered at the 1953 International Petersen Motorama Show and received much attention (featured in several magazines, including Car Craft, February 1954). As a result, Sorrell began to produce fiberglass versions of the SR-100.

Several cover stories in Car Craft followed and Sorrell began to receive orders for cars. Dick Laine bought a blue SR-100 with a GMC 6 for street use. Denny Larsen built a red, white and blue SR-100 with a gullwing hardtop for the 1954 Bonneville speed trials. This car was featured on the cover of Rod & Custom (May 1955) and travelled at an astounding 174-mph on the salt. All told, Sorrell built seven fiberglass SR-100’s for customers, but only six of them actually left his shop.

The records from Sorrell Engineering survive and it appears that an SR-100 built for Laster and Pollard was never delivered. The car was constructed in 1954 on a Chuck Manning chassis, but may have never been painted. Several individuals who knew Sorrell have indicated that they and others tried to buy this car from Bob, but that he would never let it go. Therefore this one owner SR-100 remained in Sorrell’s personal collection until his passing in the summer of 2003.

Sorrell’s SR-100, also known as the 1954 Sorrell-Manning Special, was found in a storage container in Southern California after his death. It passed through several dealers’ hands and was ultimately purchased by the current owners who commissioned a frame-off restoration. The Sorrell-Manning Special is powered by a ground-pounding Chrysler Hemi snorting through four Zenith carburetors on a genuine Briggs Cunningham intake manifold. Equipped with gorgeous Stewart-Warner gauges set in an engine-turned dash this car sizzles. Halibrand-style wheels with knock-off hubs, Dunlop tires, covered headlights, side exit exhaust, formed metal seats with bottom cushions and competition-style seatbelts, plus a hinged-at-rear body is able to raise much in the manner seen on a NHRA ‘Funny Car,’ resulting in an all-business and aesthetically pleasing presentation.