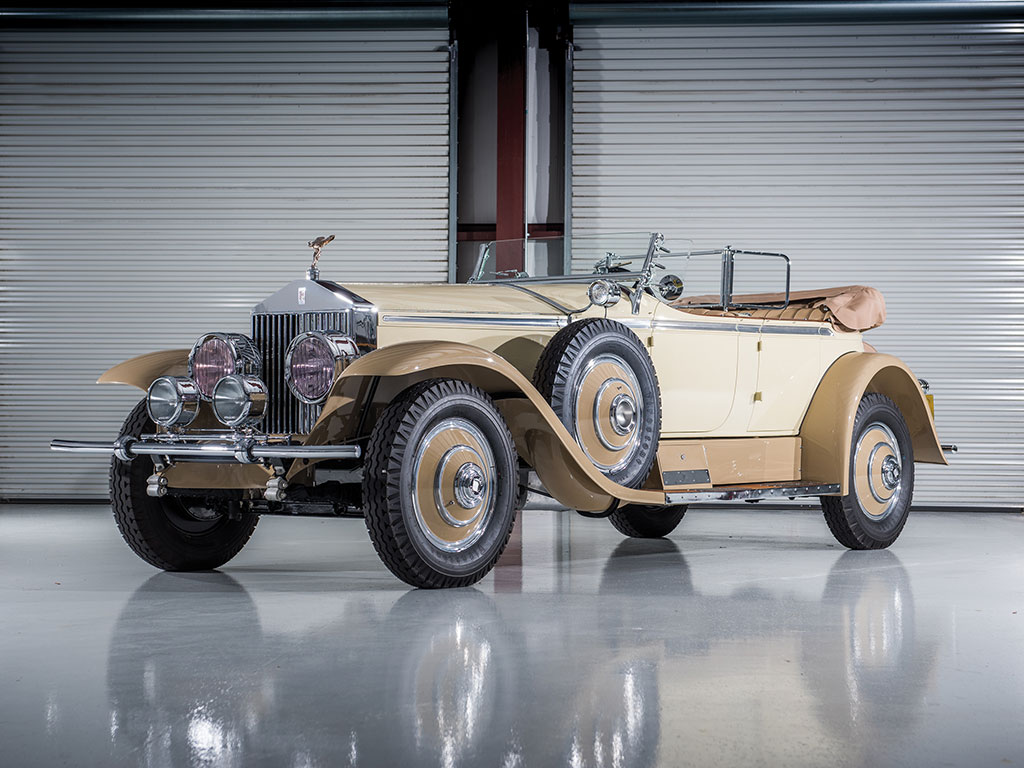 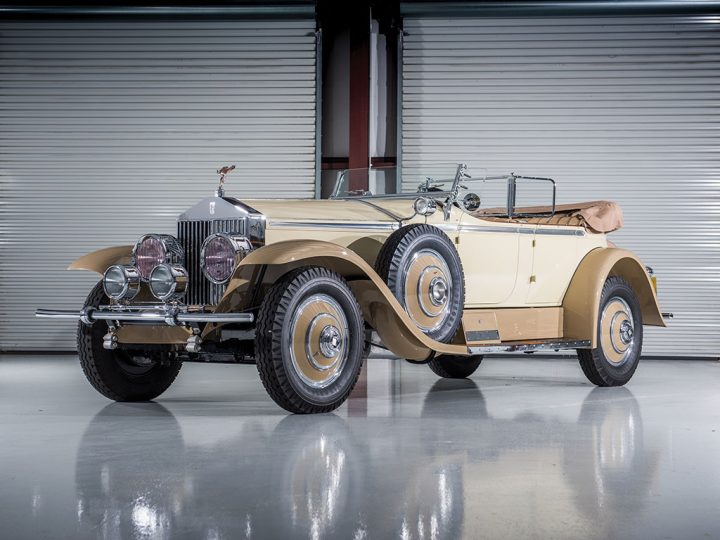 The catalogued bodies fitted to the American-built “Springfield” Rolls-Royce Phantom I chassis were noted for lines more gracious, elegant, and – yes – sporting than their British counterparts. Few were more attractive than the Ascot Tourer, a handsome five-passenger open model with refined styling, including artfully flowing fenders, a nearly horizontal concave polished accent along the beltline, and a raked one-piece windshield, which was favored by socialites and film stars on both coasts. Historian John Webb de Campi’s Rolls-Royce in America records production of 28 Ascot Tourer bodies, largely by Brewster and all originally mounted to Phantom I chassis. Many of these were employed as “trials cars,” to be driven by prospective buyers, as they were considered to show the full potential of what an American Rolls-Royce could be. 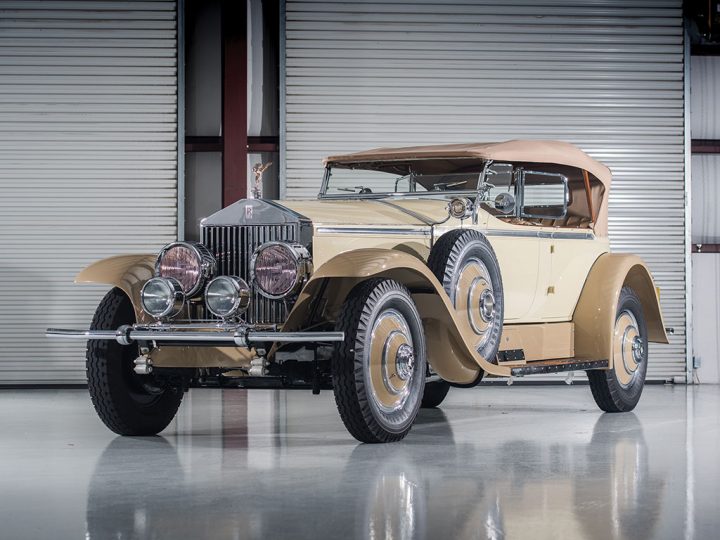 According to a history assembled for Mr. Smith by Rolls-Royce historian, Rubén Verdés, chassis number S337FM was originally delivered with a Stratford convertible coupe body to Doran Hinchman of Logan, West Virginia, on 12 April 1928. Member of a very prominent Logan family involved in coal and timber production, Mr. Hinchman had excellent taste in automobiles, reflected by his eventual trade-in of the Rolls-Royce on a Model J Duesenberg (J-357) in early 1930. Subsequently the car was sold by Duesenberg Motors to H.F. Deane, then in May 1934 to Mrs. Edward V. (Clare S.) Quinn of Shrewsbury, Massachusetts. 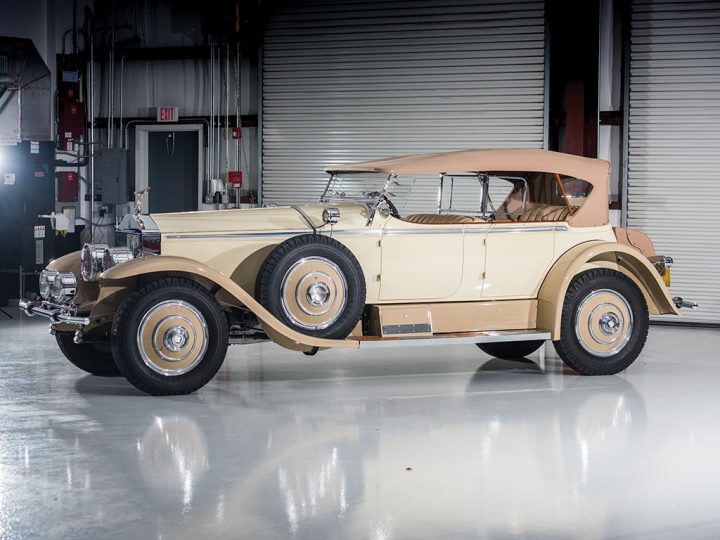 For Mrs. Quinn, of Claredda Farms thoroughbred fame, Rolls-Royce of America mounted the present Ascot Tourer body, noted as “new” (i.e., not re-used from an earlier chassis). A later model with rounded fenders, it is believed that this body was the final new Brewster Ascot body mounted to a Rolls-Royce chassis.

The Phantom I made its way across the United States and was next acquired on 19 May 1952, by James Ten Broeck Baker of Whittier, California. It next passed in 1956 to William Bagshaw of Beverly Hills, California, who sold it later that year to Dr. C.L. Pressler, an early and longtime enthusiast from Avondale, Ohio. The Ascot remained with Dr. Pressler for decades, making frequent appearances at various shows, concours, and events in the Akron/Canton area. It later passed through Rick Carroll’s famed Jensen Beach, Florida, collection, before being acquired in 1983 by Bruce Campbell of Alamo, California, and was added to Orin Smith’s distinguished collection nearly a quarter of a century later. 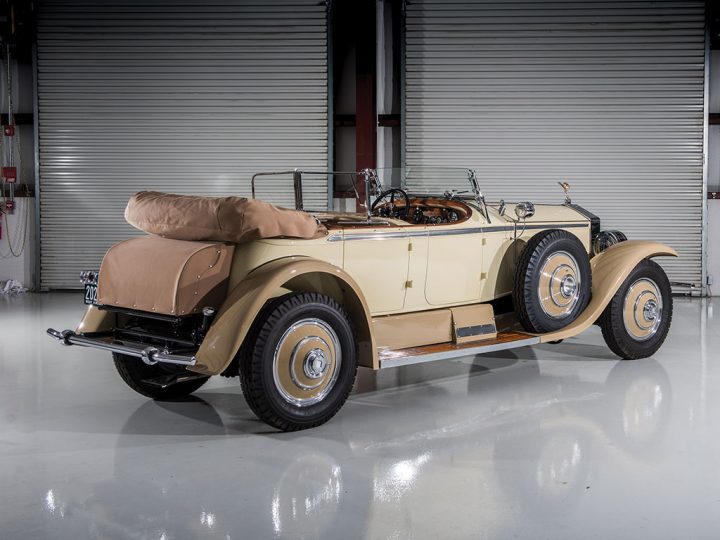 Mr. and Mrs. Smith commissioned a full restoration of the Ascot by the noted marque specialists Vantage Motorworks of Miami. As-acquired, the car was reported to be in very solid original condition, and aside from cosmetic work over the years did not appear to have ever been restored. The body was properly stripped and refinished in pale yellow with buff wings and a tan interior, a color scheme chosen to match the Phantom I Henley Roadster that the Smiths loved, retaining as much of the original inner woodwork and outer sheet metal as possible. The large Bausch & Lomb drum headlights, large rolled aluminum bumpers, and vertical radiator shutters are all correct for a Springfield Phantom I of this generation, and they are presented here with oversized matching Pilot Ray driving lights, introduced in 1927, with a “Barker” dipper mechanism for nighttime driving. The car is also fitted with a correct three-light tail lamp cluster, with the brake, tail, and reverse lamps mounted over the license plate frame, and an Auster windscreen. Interior trim is largely proper, although the wooden dashboard appears to be of later construction than the rest of the woodwork. The paintwork is deep and rich, with a consistent shine, with only minor wear noted around the edges of the bonnet, and masking lines visible along the bonnet hinge. 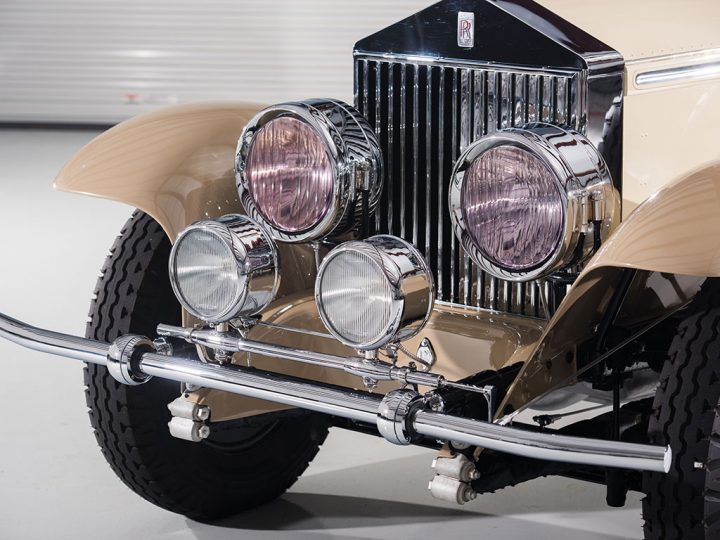 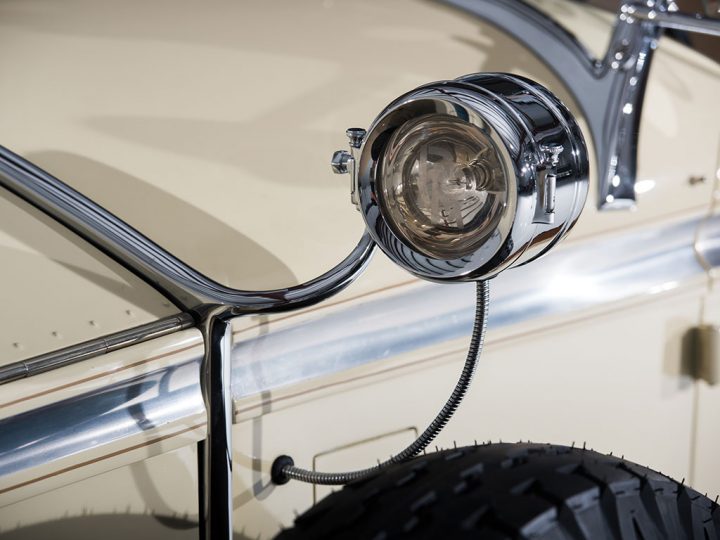 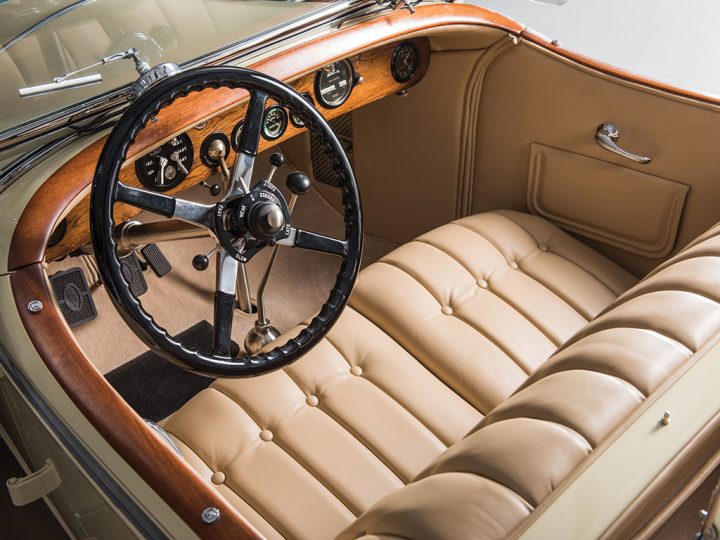 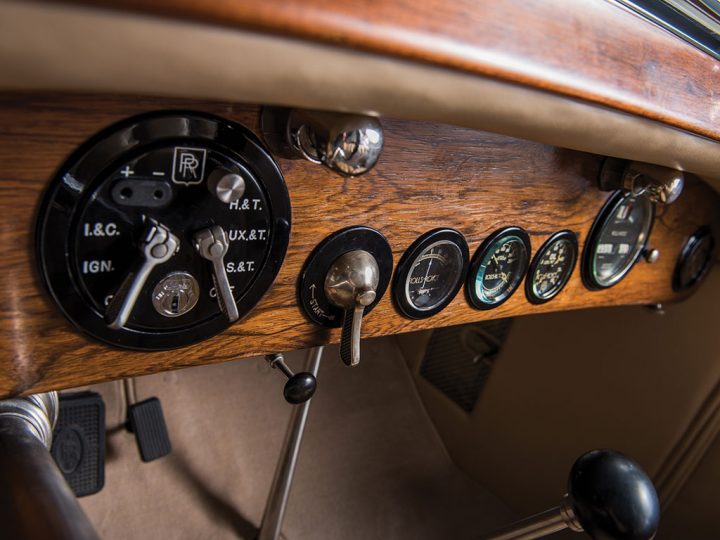 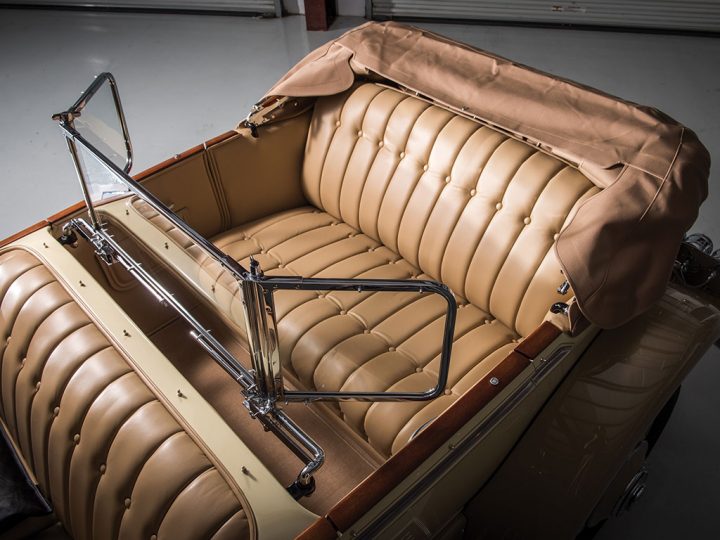 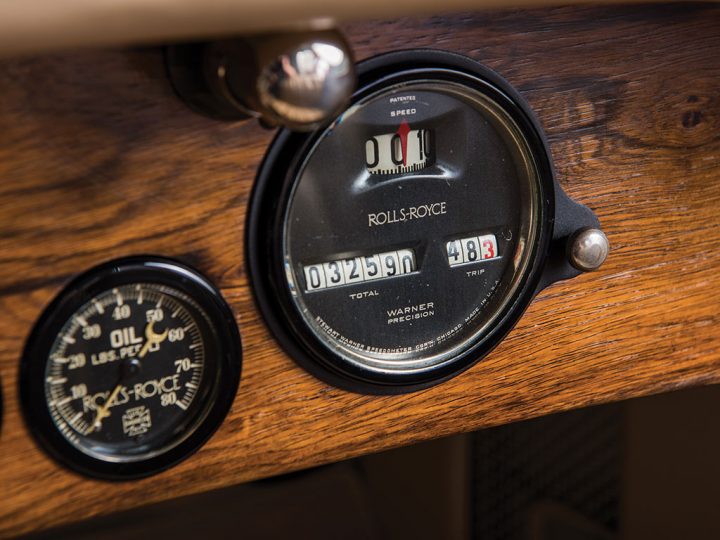 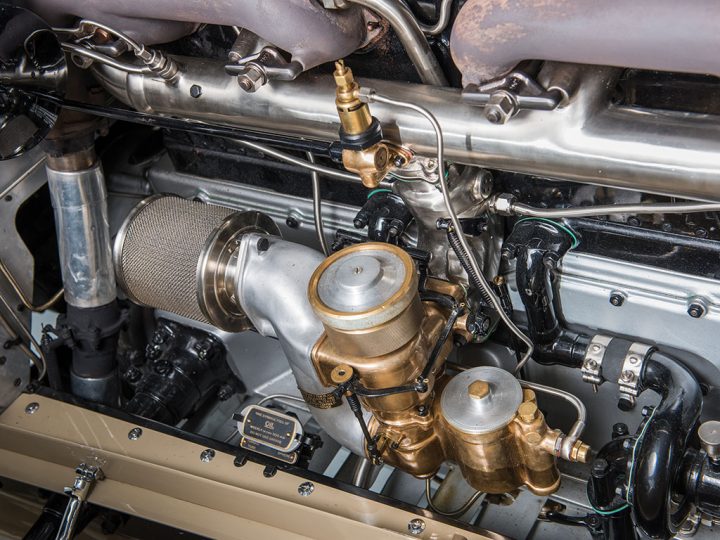 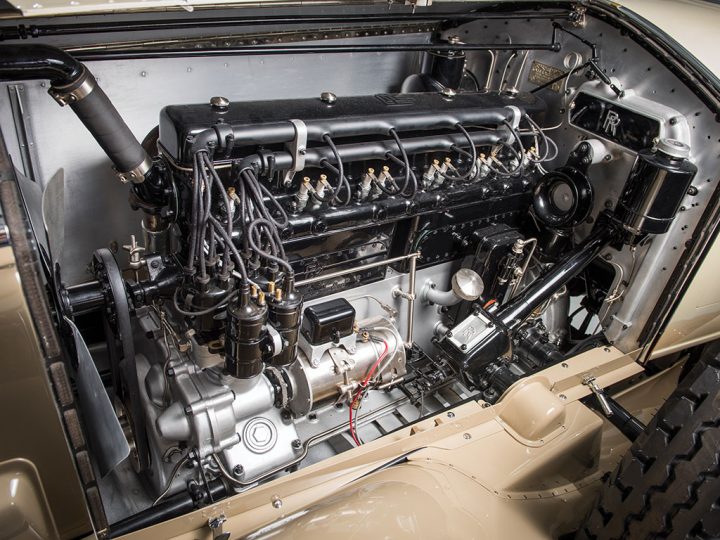 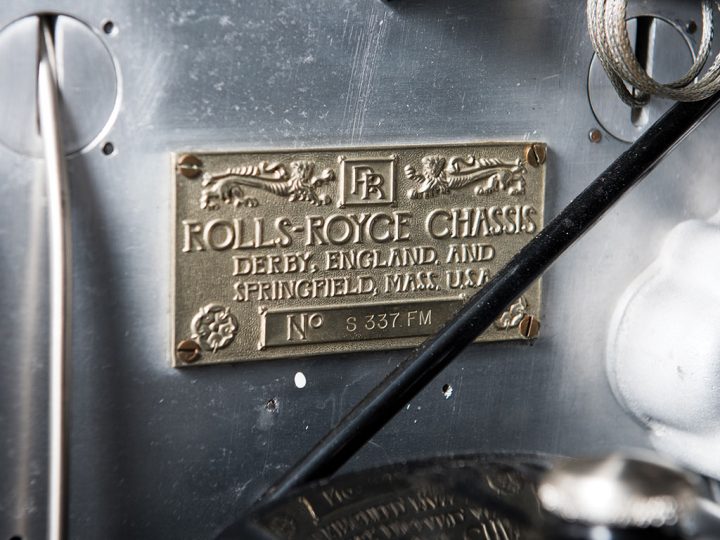 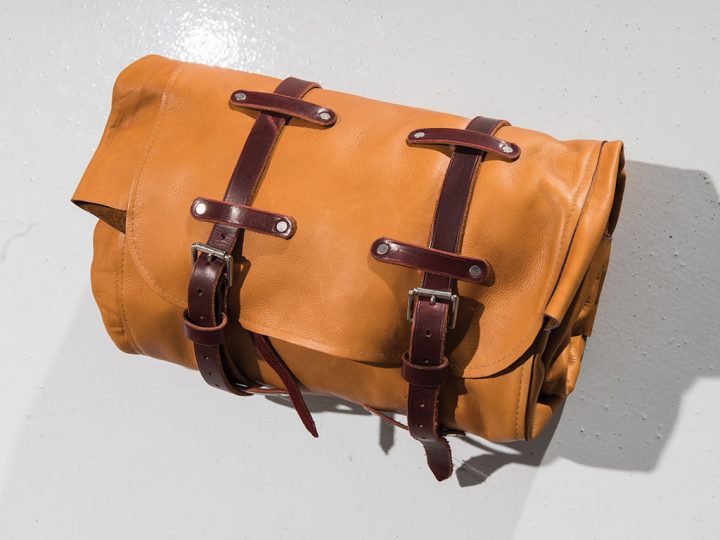