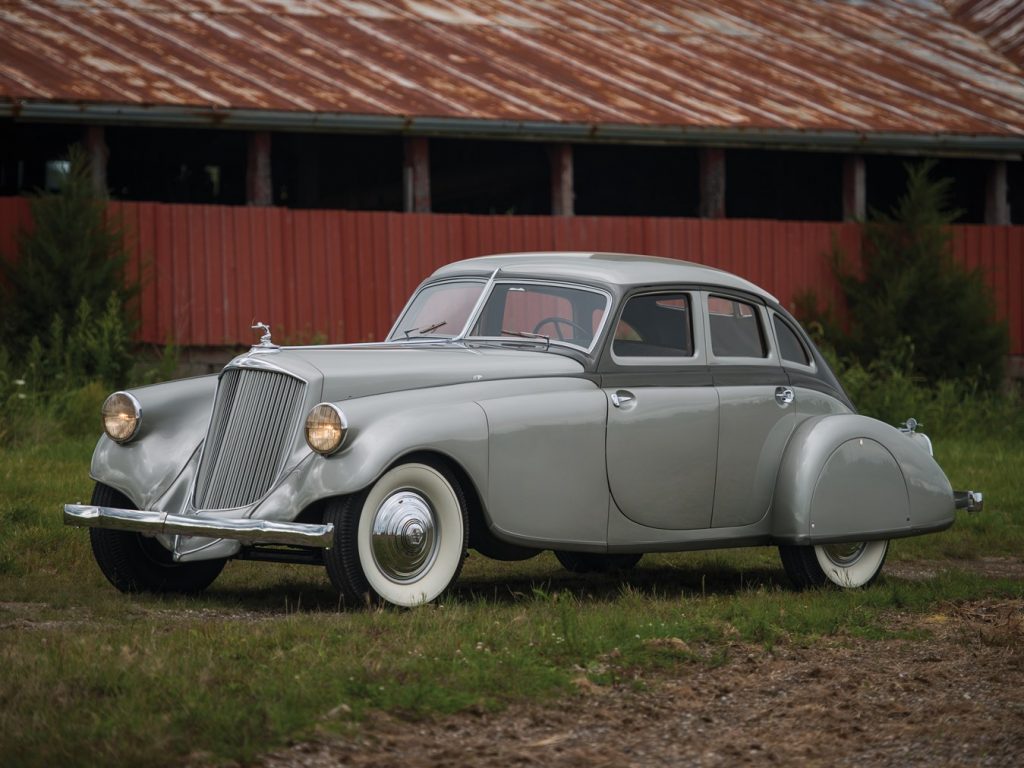 This Silver Arrow is recognized as being body no. 1, the first Silver Arrow produced, and was used to debut the wild new idea at East Coast auto shows during 1933, including both New York and Boston. Interestingly enough, both the recollections of Pierce employees from the period and examination of the few surviving black-and-white images seem to indicate that this first Silver Arrow was not silver at all, but two-tone tan – something that future owners, fortunately, did not resurrect.
Pierce’s clientele were notoriously conservative and not really the type of people who bought super-streamlined dream machines, something that they would come to realize in the months ahead. When the time came to disperse the Silver Arrows, one was sold to a flamboyant doctor, and yet another to an artist in suburban Chicago – men who enjoyed the attention that the car brought them. The same was true for the buyer of this car, M.C. Hudson, the San Francisco distributor for Crazy Water, the famous health-giving mineral water bottled in Texas since 1881. Liveried with Crazy Water logos on the doors, the Pierce served to promote the famous miracle cure throughout California.
F. Robert Greene, a New York attorney and one of the founders of the Pierce-Arrow Society, found the car in Texas around 1954, owned by a Mr. D’Oyley, another Crazy Water distributor.
Records of Pierce-Arrow historian Bernard Weis indicate that following Mr. Greene’s ownership, the Silver Arrow enjoyed various short-term owners, before being purchased by James Brucker Sr., of Buena Park, California.
Another early collector, Mr. Brucker was famous as a supplier of antique and unusual autos to the Hollywood film studios, as well as an early supporter of California’s “Kustom Kulture,” employing such noted counterculture artists as Ed “Big Daddy” Roth and Von Dutch. His family eventually opened their collection to the public during the 1970s as Movieworld Cars of the Stars and Planes of Fame, featuring automobiles in period tableaus with signs hand-painted and striped by Von Dutch in his usual irreverent style. The Silver Arrow, by now finished in silver with blue moldings, was one of the most famous exhibits. During its time in the Brucker stable, it reportedly appeared in the 1976 film, Gable and Lombard.
After many years being enjoyed by curious tourists at Movieworld, not far from a functioning guillotine and Robby the Robot, the Silver Arrow found a new owner in the late 1970s with Dr. Don Vesley of Louisiana and Florida. Dr. Vesley maintained the car for several years before selling it in the 1980s to the Blackhawk Collection of Danville, California, for their immense collection, where for some time it was actually united with the other pair of extant Silver Arrows! During this time the car received its current restoration by Mike Fennel of Saugas, California, in two-tone silver and pewter, with a correct striped cloth interior.
Thomas Derro purchased the restored Silver Arrow from the Blackhawk Collection in 1996, and it immediately took its place as the centerpiece of his collection. He wasted no time in beginning to show it, and over the last two decades it has gathered awards all over the country, including Best of Show at Lehigh in 1997 and Radnor Hunt in 2004; Best American Classic Car at Greenwich in 2005; AACA National First Prize honors in 1999; and a Classic Car Club of America Senior Premier badge, number 2086, among many other honors. It has always been well preserved and, aside from a few blemishes, remains in remarkable condition, with shining chrome, a well-detailed engine and undercarriage, and an interior that appears fresh, crisp, and show-worthy. Having been in enthusiast hands since the 1940s, it remains in the best-preserved, most authentic, and complete condition of the surviving Silver Arrow.