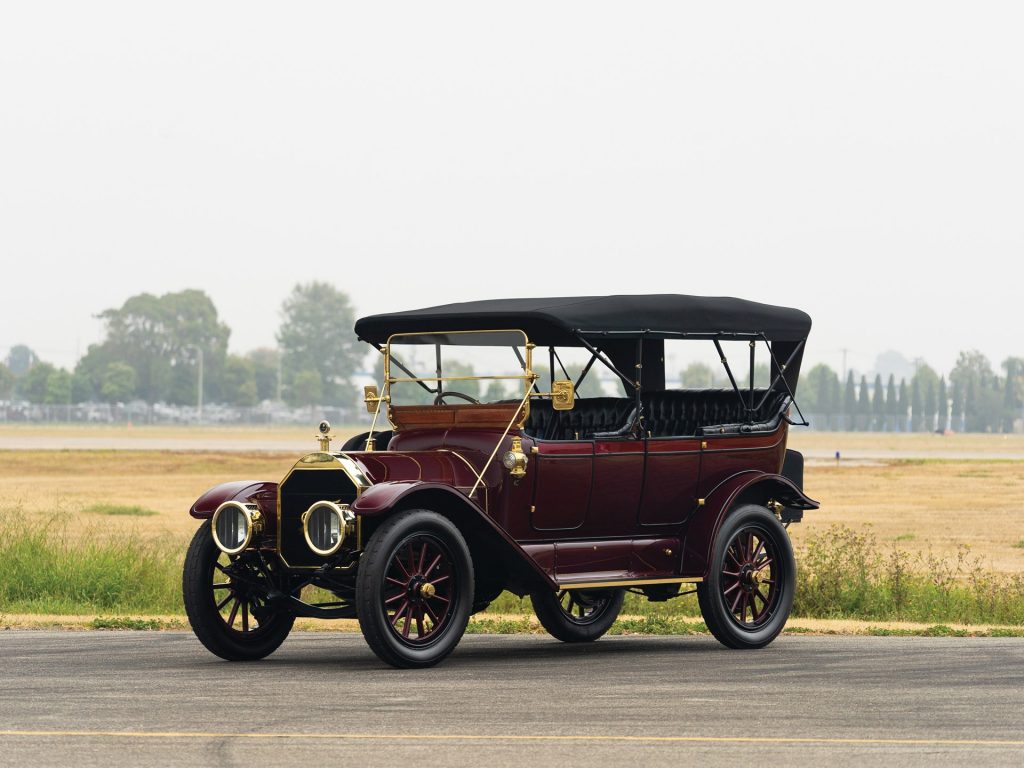 The seven-passenger touring presented here was built in November 1911 as a 1912 model, with that year’s identifiable features of concealed door hinges and gearshift and brake levers moved inside the body – very modern touches for the time.
Records of Pierce-Arrow historians Bernard J. Weis and Patrick Craig note its earliest known owner, in the 1950s, as James P. Sullivan of Oceanside, California, who made a cross-country trip in the car in 1969, testament to its rock-solid quality. Following Sullivan’s passing in 1971, the Pierce was acquired by America’s first World Champion racing driver, Phil Hill, who, off the track, was a Pierce devotee whose family had owned them when new.
Later owners included Bill Kuring, well-known sports car enthusiast Bill Ziering, and E.C. “Bill” Lawrence, a.k.a. “Doc” Lawrence, former president of the Horseless Carriage Club of America, for whom a “touring restoration” was completed by the well-known Stu Laidlaw, including adoption of a Series 51 crankshaft. The restored car was driven extensively and featured on the cover of the Pierce-Arrow Society magazine, The Arrow (1995, Issue 1).
Lawrence eventually sold his Pierce to the late, well-known Brass Era automobile guru, Don Meyer of Lebanon, New Jersey. Mr. Meyer owned many Model 48s over the years and reportedly described this one as being “the most complete, original” example among them, a sentiment echoed by Mr. Craig in a recent telephone conversation, in which he noted that the car had been missing only a few minor parts over the years, and had always been complete and well maintained.
Meyer later sold the car to well-known collector Jim Grundy, from whom it was acquired by its current caretaker in 2007. It was found to remain solid, intact, and presentable, in the same fine order that Mr. Meyer had described it. Nonetheless an extensive restoration was completed for the owner by well-known Brass Era specialist, Bob McKeown, in which, the owner notes, it was kept as original as possible, including sourcing a pair of correct headlamps that were restored by Vintage Brass, and correct rear end ring and pinion gears made to the original 3.31:1 ratio. The completed restoration was exhibited in 2010 at the prestigious Pebble Beach Concours d’Elegance.