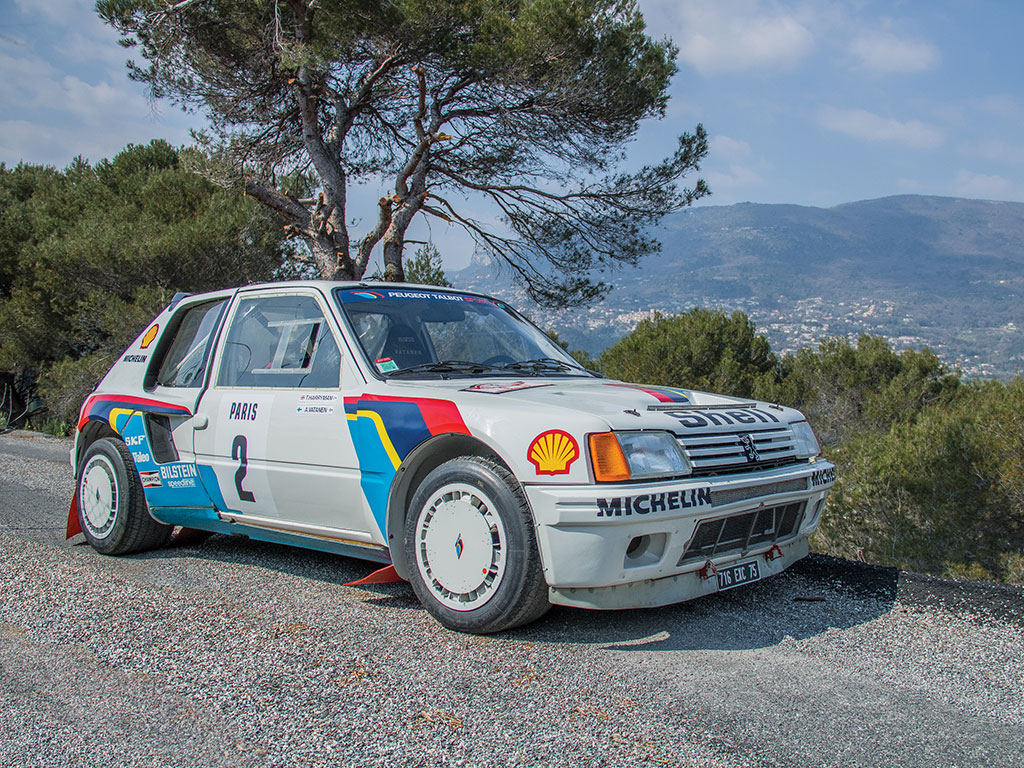 That era, beginning in 1982 and lasting just five seasons, is often referred to as the “Golden Era” of rallying and was one of the most technologically advanced and intriguing, but also dangerous, times in motorsport history.

Arriving relatively late to the scene—only homologated in 1984—the Peugeot 205 Turbo 16 Group B rally car was to trounce the established opposition en route to winning six of the eleven WRC events held in 1985 alone.

This T16, serial number C11, was built by the Peugeot Talbot Sport team for the 1985 WRC season, to be driven by the 1981 World Champion Ari Vatanen. The opening event was the 53rd Rallye Monte-Carlo, held from 26 January to 1 February over roughly 850 kilometres of the most gruelling and demanding roads in France. Peugeot Talbot Sport would enter three cars: C6 for Bruno Saby, C10 for Timo Salonen, and C11 for Ari Vatanen. After testing, all three drivers chose to run on the tarmac suspension setup with a 33/67 torque split front to rear. All three cars were initially fitted with the close-ratio gearbox sets, but soon Vatanen opted for the wider ratio; the sister cars would follow suit on the following stages.

The rally started well for Peugeot fans, as Ari Vatanen immediately took the lead with a victory on the first stage. The second stage was taken by the Sport Quattro S1 of Walter Röhrl, who claimed the overall lead by the end of the first day. On Monday morning, Vatanen and Röhrl immediately made it clear that they were the race favourites by trading stage victories. For the stages held near Grenoble, Audi Sport changed Röhrl’s suspension settings, and Vatanen took advantage by snatching 42 seconds from the Quattro in only two stages. Audi quickly reverted Röhrl’s suspension back to its previous setting, however, Vatanen was on a role and managed seven victories out of the next eight stages!

At the evening stop, close to Gap, Vatanen believed he held the rally lead with nearly a four-minute advantage. However, at the previous stage, Barcelonnette, there had been a delay of four minutes. This delay should have been recorded by the timekeeper when noting the Peugeot’s theoretical arrival time at the next stage, however, he had forgotten. The T16 arrived at the next stage without considering the delay and, as a result, was handed a penalty of double that, namely eight minutes. The blame fell to British co-driver Terry Harryman, who, probably terrified at the prospect of having to sit in a rally car with a determined Finnish driver, now needed to regain 4 minutes and 41 seconds to regain the lead. Of the remaining 16 stages, the determined duo won 14!

By the end of the rally, Vatanen and Harryman had not only bought back their deficit, but also pulled out an astonishing advantage of 5 minutes and 17 seconds, ultimately claiming victories in 21 of the 33 stages. Furthermore, all three Peugeots finished in the top five.

The second round of the 1985 was held in Sweden from 15–17 February. Jean Todt, then the Peugeot Talbot Sport Director, chose to take only two cars: C10 to be driven by Timo Salonen and C11 once again to be piloted by Ari Vatanen. Both cars retained the same torque split as in Monte Carlo, but Vatanen chose to reinstall the close-ratio gearbox he briefly used, limiting his top speed to roughly 187 km/h against the sister car and Audi’s top speeds of 205 km/h. The rally began in near-ideal conditions of snow and ice, ensuring everyone donned studded tyres. However, several sections revealed the gravel underneath, a problem that would have a greater impact on the Audi due to its heavier and less well-balanced cars. Stig Blomqvist, in his Sport Quattro S1, jumped out to the lead, winning the opening stage. Vatanen, however, was not to settle for 2nd and emerged as the one to beat after the second stage, a position he would never relinquish!

The World Rally Championship was building momentum with the Peugeots clearly leading the pack. The Portuguese rally was the third round of the championship, and again Vatanen chose his trusty back-to-back rally winner. One of many great features of the 205 Turbo 16 was its suspension design, which allowed for quick changes between tarmac and gravel setups during service, a feature that would be used numerous times in Portugal. Vatanen retained the same torque split as previously but fitted more robust front under-body guards. Unfortunately, Vatanen’s incredible run of success would come to an end at this event. He was, as always, on the pace and took three stage victories before suspension failure and a faulty flywheel sensor led to his retirement. It also brought to an end his impressive run of consecutive victories in the last five World Rally events he had entered.

After its incredibly successful start to competition, C11 was effectively retired from Works competition after the Portuguese rally. However, Vatanen did use the car for recce on both the Tour de Corse and Acropolis rallies later in the year, with its final outing with Bruno Saby, again as a recce car, at the Rallye Sanremo.

By the end of the 1985 season, Peugeot had wrapped up both the Drivers’ and Manufacturers’ World Rally Championship titles. With the 205 T16, and under the leadership of Jean Todt, Peugeot was the most successful team to compete in the final chapter of the Group B era.

After the 1985 season, C11 was sold to Mr Seydoux, a renowned collector in France. He maintained the car until 2001, when it passed to the consignor. During this time, it had not been rallied, only occasionally demonstrated and otherwise displayed at the Monte Carlo museum. More recently, the T16 had its engine serviced by a rally specialist in France and is presented in the condition as it was sold to Mr Seydoux all those years ago.