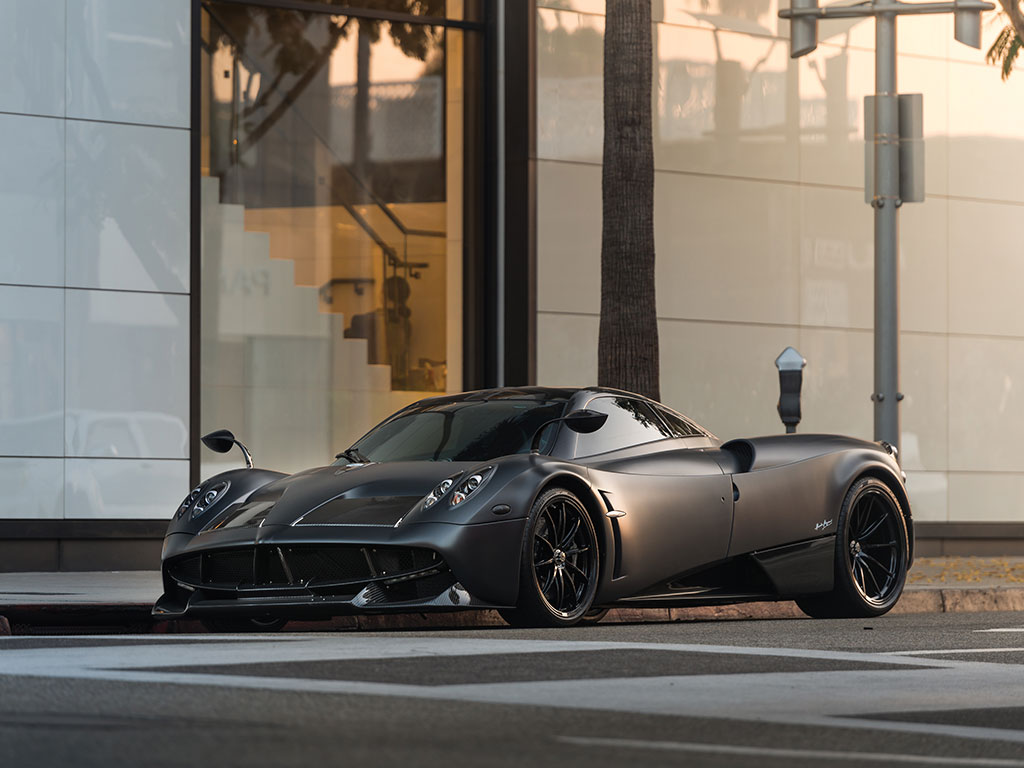 The only Huayra finished in Grigio Scuro Opaco and the first customer car in the United States, this example was delivered to Beverly Hills and has remained there with its original owner ever since. The car’s sinister matte dark grey and carbon exterior is complemented with a full beige leather interior that also benefits from a number of the carbon fiber and aluminum trim pieces for which Pagani is known. The car also comes with the desirable seven-piece luggage set, a $20,000 option, trimmed in beige leather to match the interior, offering a glamorous and practical way to take advantage of the Huayra’s surprisingly large storage space.

The Huayra’s attention to detail throughout is simply mesmerizing. Open up the gullwing doors and one is met by leather and carbon fiber of the highest quality, giving the cabin an equally sporty yet luxurious ambiance.

Fully customizable by the customer, the Huayra offers all the amenities one would expect in a modern-day supercar, with a fit and finish that is second to none. With just 100 Huayra coupes produced and such incredible performance, the Huayra is truly in a rarified automotive atmosphere and is a car that many aspire to have but that few have the privilege to own.

After its delivery, the car was fitted with Pagani’s “Tempesta” package at a cost of roughly €183,000. As a package available to be fitted to existing Huayras, it offered a number of upgrades to address aerodynamics and weight-savings in an effort to provide even greater performance. The packages offer a completely new underbody for the car, along with a front splitter and rear diffuser, offering even greater downforce. To cope with this additional downforce, new four-way adjustable Ohlins shock absorbers are fitted as well. New wheels are fitted, 20 inches at the front and 21 inches at the rear. Made of aeronautic-grade aluminum alloy, weight is reduced by 1.1 kilograms for the front wheels and 2.5 for the back while remaining just as strong as the originals. Finally, the Tempesta package includes a new exhaust system made completely of titanium, which weighs just seven kilograms, three kilograms lighter than the standard exhaust.

This only seeks to add to the Huayra’s exceptional performance. With a 6.0-liter twin-turbocharged V-12 sourced from Mercedes-AMG, the engine is capable of producing 720 brake horsepower and an incredible 1,000 Newton-meters of torque. Further to the aerodynamics offered by the Tempesta package, the Huayra utilizes active aerodynamics in the form of four independently operating flaps placed on each corner of the car. Controlled by the car’s computer, these flaps can instantly adjust to reduce drag, offer additional downforce, or rein in body roll depending on the car’s speed, lateral acceleration, steering angle, and throttle position.

Well looked-after since day one, this Huayra has been carefully used and enjoyed, as evidenced by its flawless condition both inside and out, having been driven juts 640 miles from new. With the addition of the Tempesta package, it remains ready to drive and enjoy at a moment’s notice and will surely be the center of attention wherever it goes.