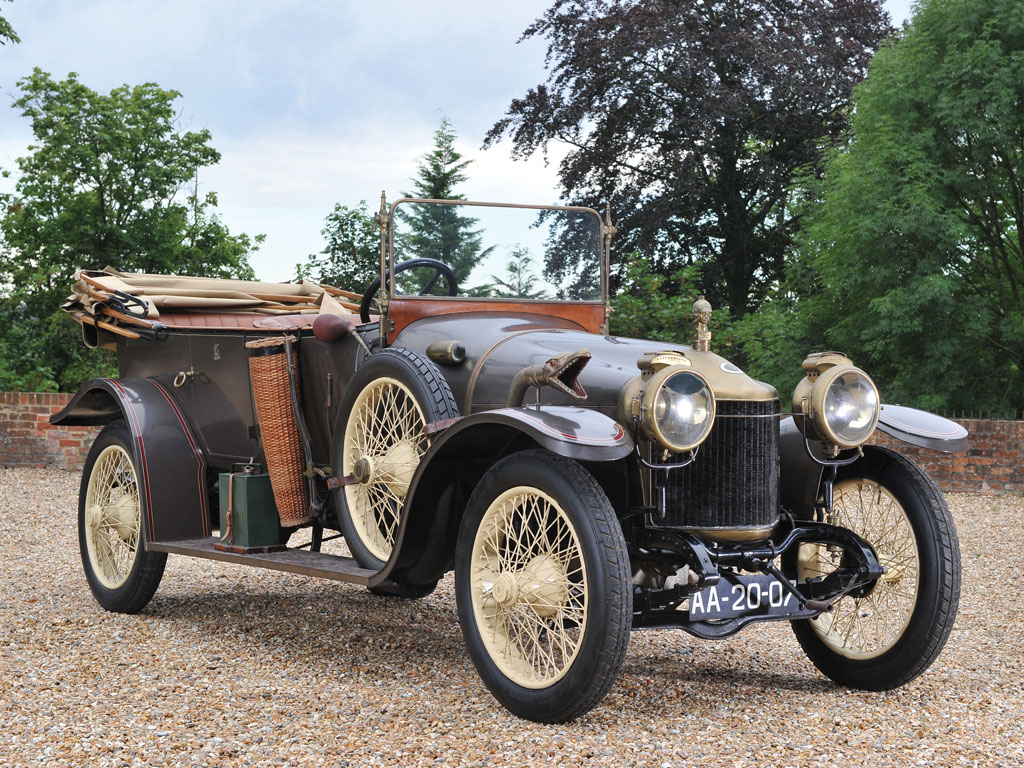 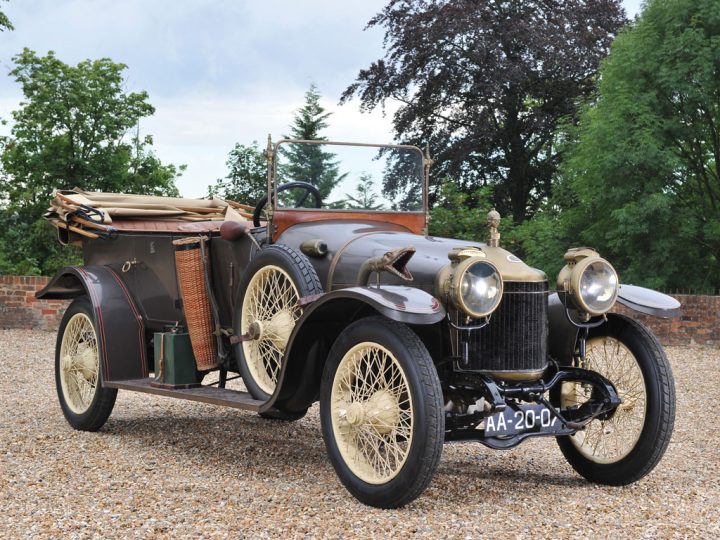 The Minerva, often called the “finest car to come out of Belgium”, was the longest lived of that country’s high-quality marques. Its founder was Sylvain de Jong, a Dutchman and former journalist who had been making cycles under the names Minerva and Romania. He started building motor tricycles in 1899 and exhibited a prototype voiturette and light van at the Antwerp Cycle Show that same year. 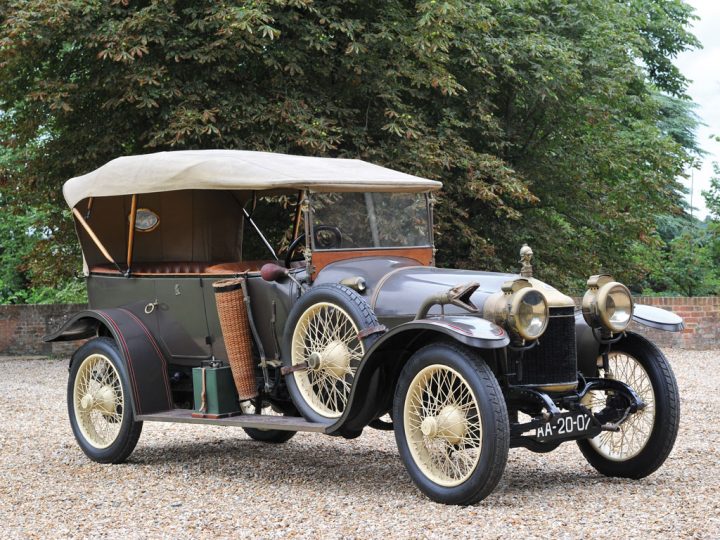 The first Minerva cars appeared in 1902 and featured a wide range, with two-, three-, and four-cylinder engines. However, the most important development was the light Minervette of 1904, with its single-cylinder, 636-cubic centimetre engine. Larger cars, which featured 3.6-litre, four-cylinder engines or 6.2-litre sixes, were introduced in 1906. That year, Minerva Motors SA, of Antwerp, Belguim, had a workforce of 1,200 and turned out 600 cars, plus 1,500 motorcycles. 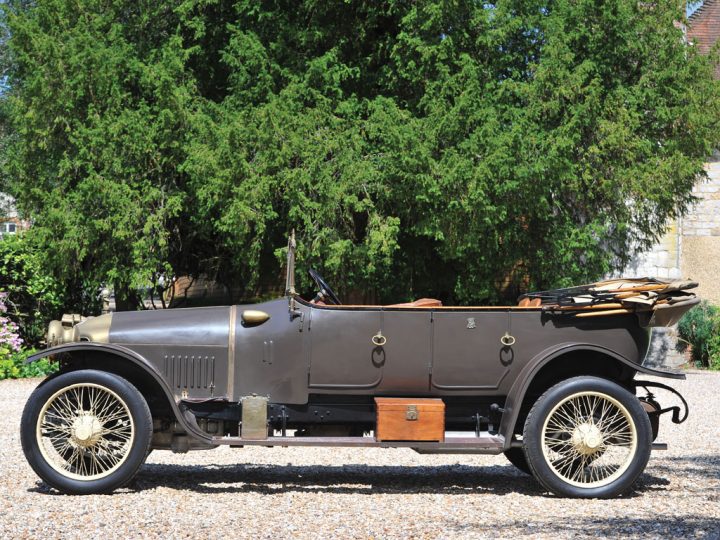 In 1909, Minerva took a bold step that would define the marque for the rest of its 36-year lifetime. It became the second European manufacturer to adopt the Knight sleeve-valve engine, with Daimler having been the first in 1908. The engine was the brainchild of American engineer Charles Yale Knight, and it used concentric sleeves with slotted ports. These rotated, one inside the other, and were actuated by an eccentric shaft. The arrangement was silent and fairly trouble-free, but it was expensive to manufacture. Ironically, Americans were the last to adopt the genre, doing so in 1911, and Willys-Knight, its principal protagonist, did not take it up until 1914. 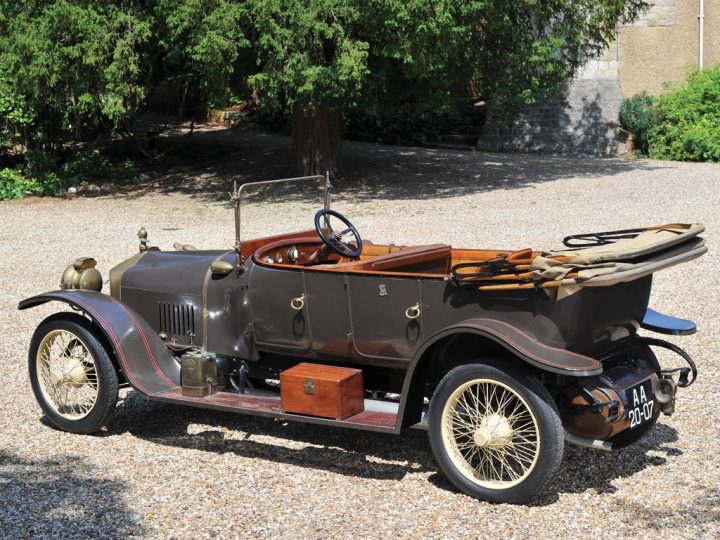 Minerva built 3,000 cars in 1913, the last full year of production before the Great War, which was the most of any Belgian manufacturer. Four models were offered in 14, 18, 26, and 38 horsepower, with the second of which being fitted to this Type KK Tourer. 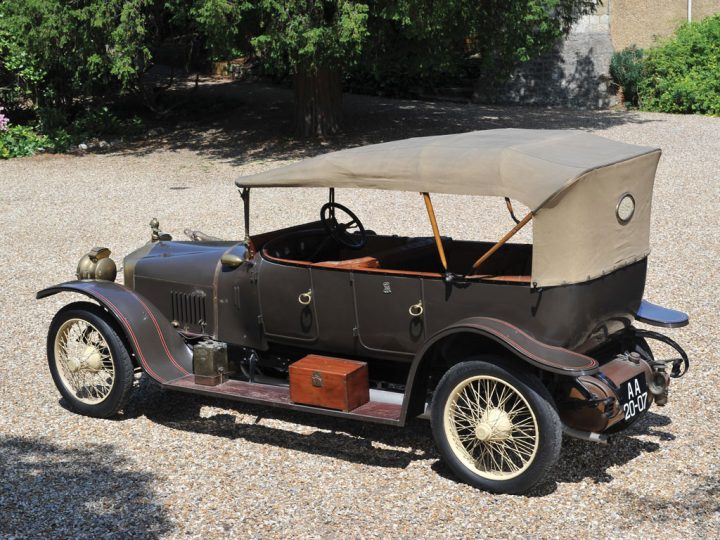 This 1914 Minerva features an older restoration that has been well preserved. The grey paint exhibits a good shine and is nicely contrasted by a wide maroon coachline on the wings, with the line itself outlined in gold. The massive brass radiator and headlamps bear the patina of ages, but they should polish up well. Atop the radiator is the helmeted Minerva, the Roman goddess of wisdom, who oversees the car’s advance into any adversity. A boa constrictor bulb horn graces the right front wing, and at the driver’s elbow is an outboard wicker umbrella holder. Its seats are of brown leather, and the car has a handsome varnished wood instrument panel. The bonnet is a tan canvas, and it shows no flaws. The engine compartment is generally clean, although not exactingly detailed. Its beige wire wheels give the entire car an air of lightness. It should be noted that as the Minerva has been on museum display, it will require further sorting prior to any extensive use. 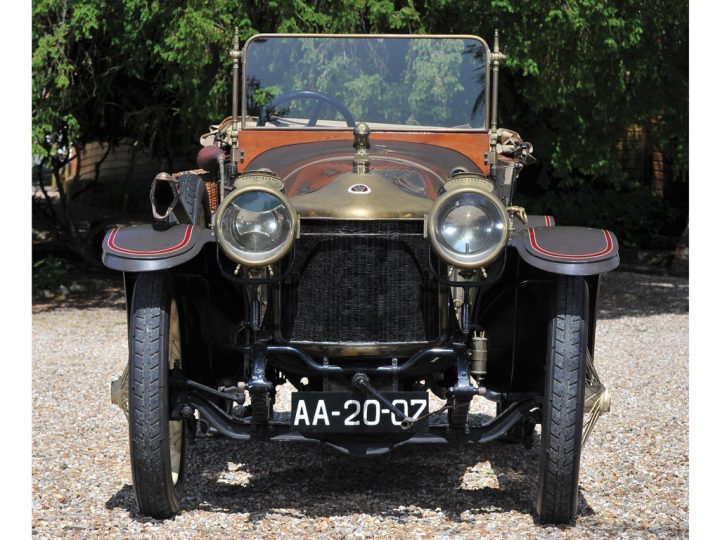 King Albert of Belgium bought a Minerva in 1910 and drove it himself whilst touring the Tyrol. His fellow royals in Norway and Sweden owned Minervas by 1914, when this car was built. 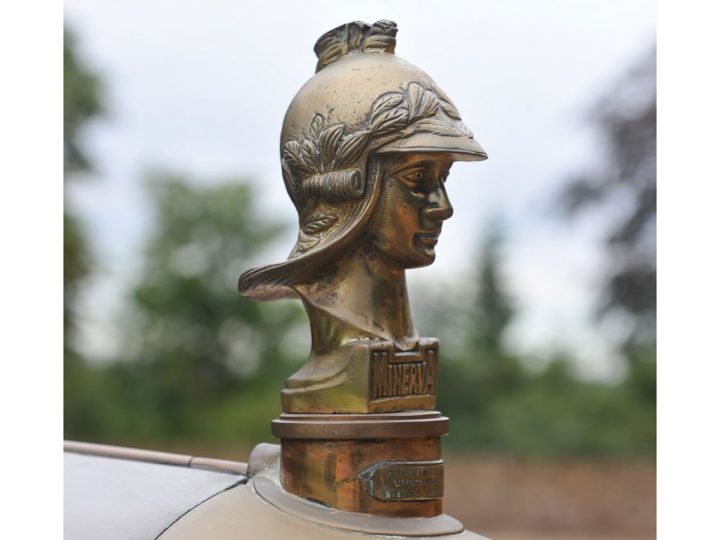 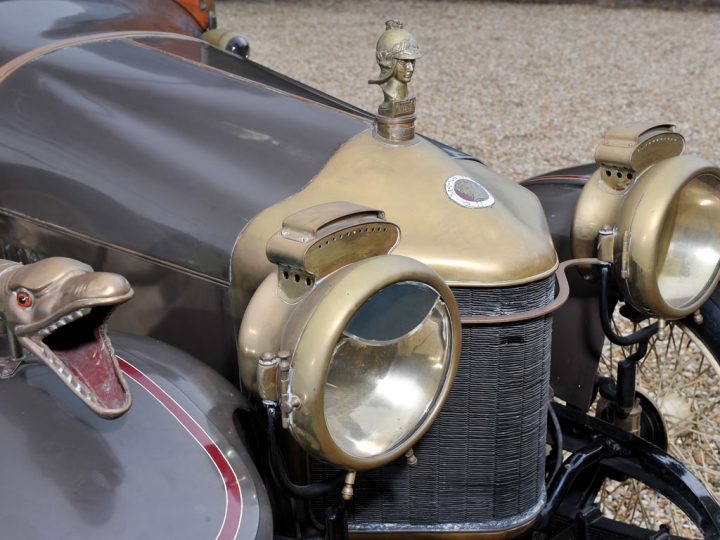 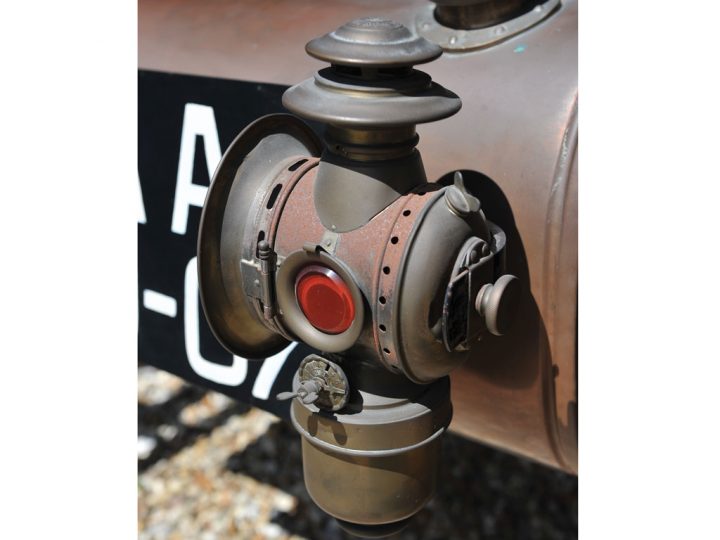 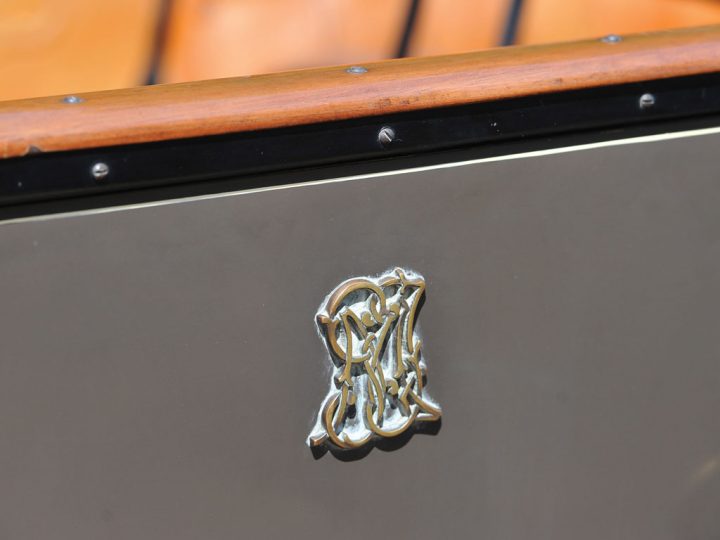 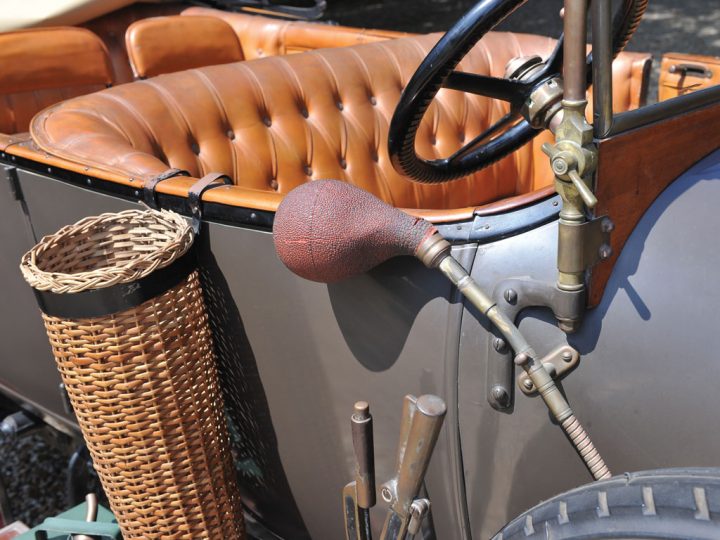 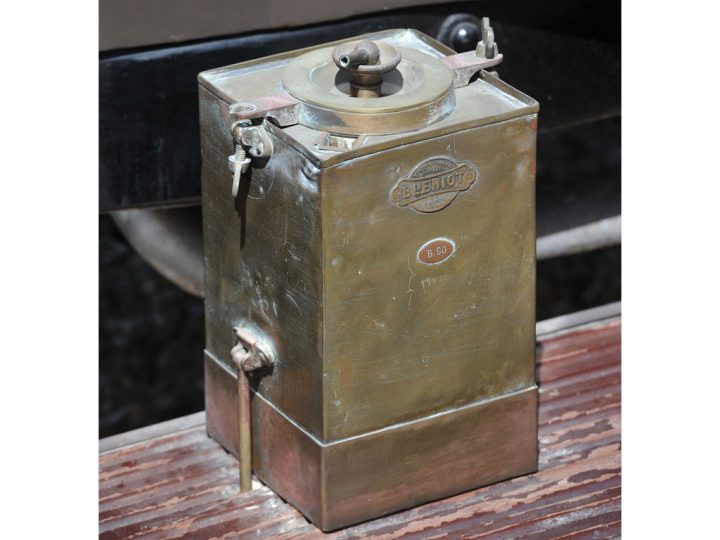 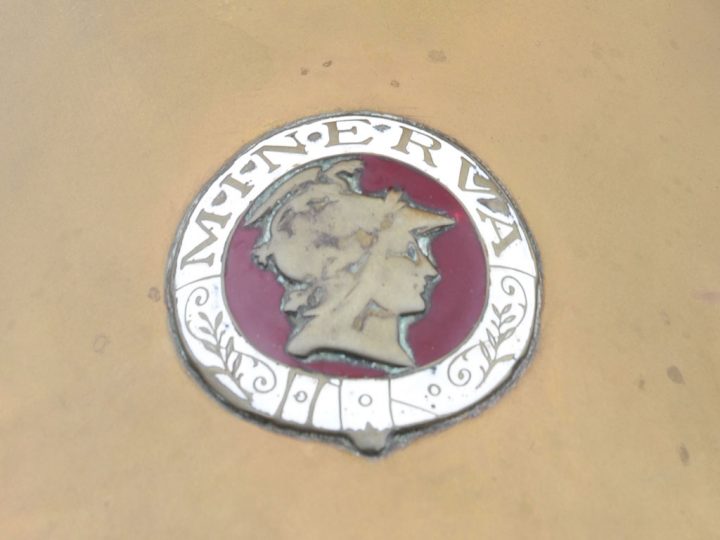 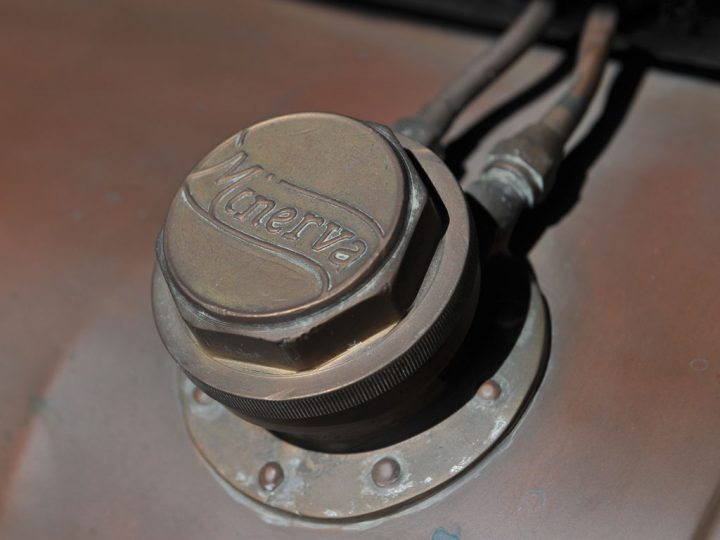 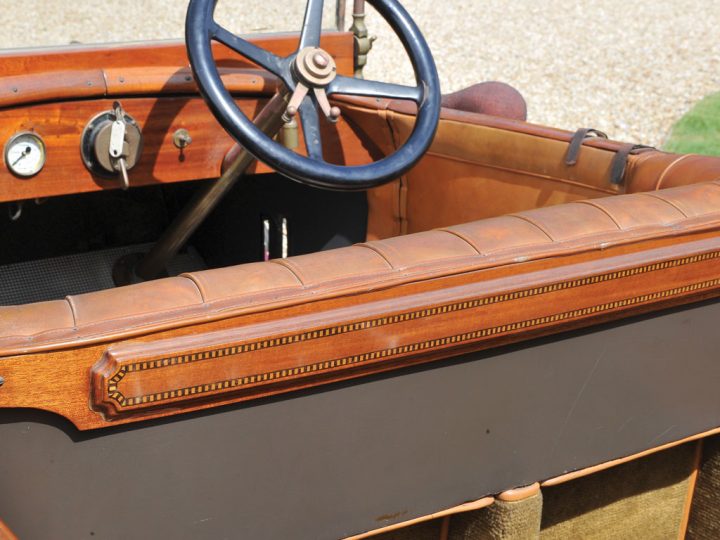 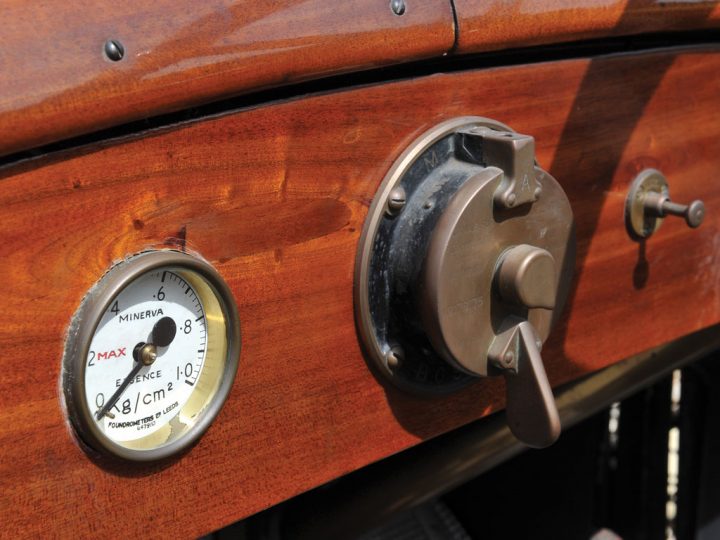 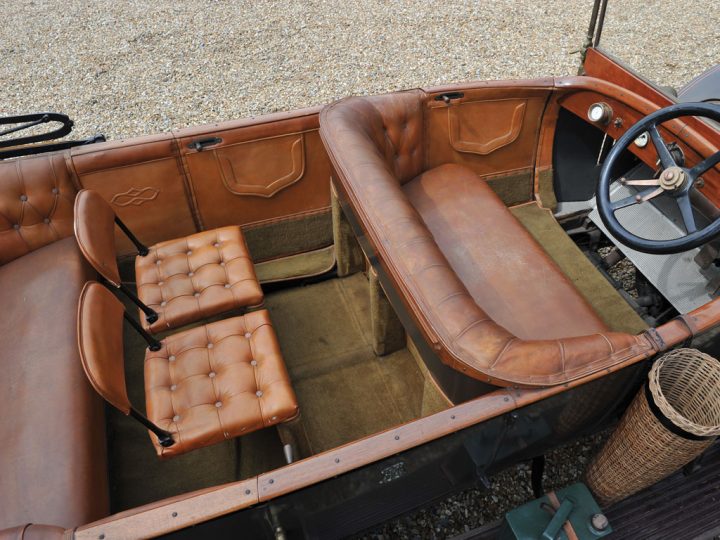 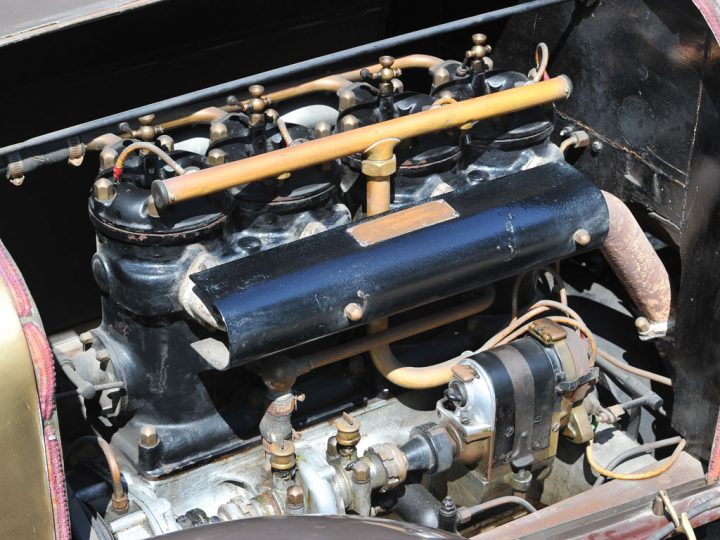 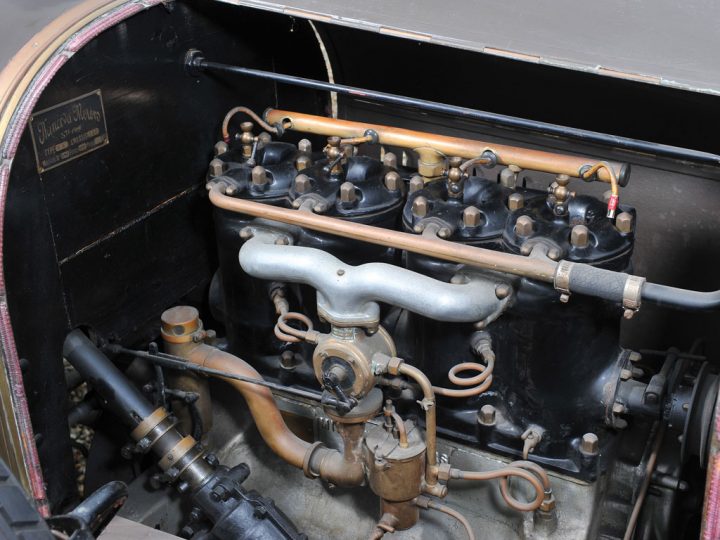 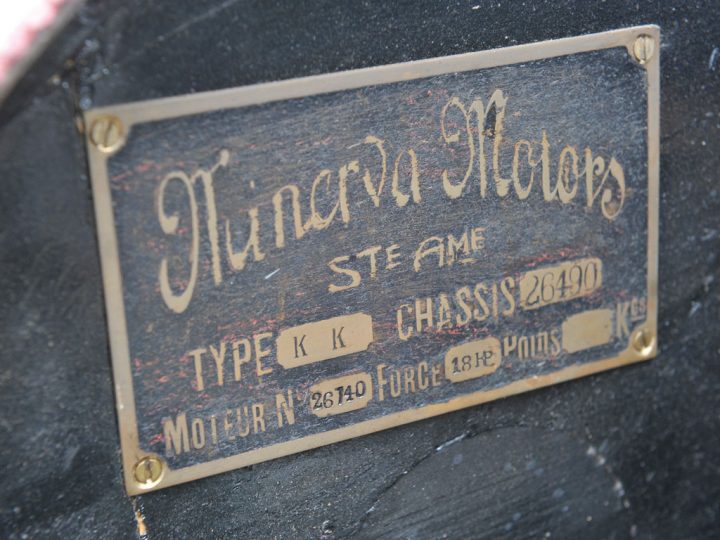