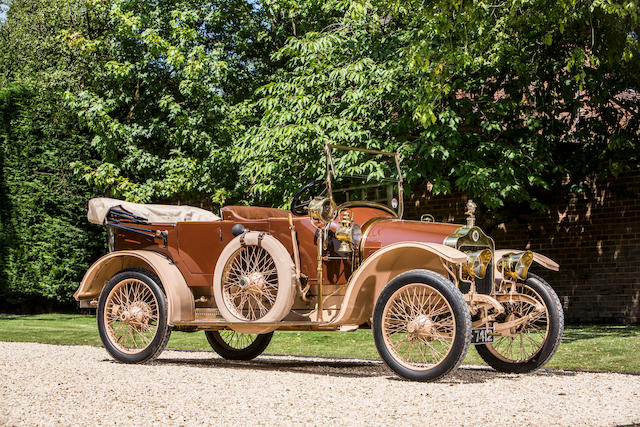 This handsome Minerva 14hp Victoria is powered by a 2.1-litre four-cylinder Knight-type engine, which drives via a cone clutch, four-speed gearbox and worm drive rear axle. It is believed that this particular car was supplied to respected coachbuilders, Cann & Co of Camden Town, London, whose plate is affixed to the front. Cann’s speciality was the supply of coachwork for the White steam car and other imported makes such as Benz, Brasier, Delaunay-Belleville and, of course, Minerva. The firm clearly enjoyed a close relationship with Minerva’s London agents, as its stand at the Olympia Motor Exhibition of 1912 and 1913 featured Minerva models.

Its accompanying VCC Car Examination Record states that the car was discovered on a farm 75 miles from Sydney, Australia and shipped to Raymond E Nelson in California in 1962, continuing: ‘At that time the car appears to have been compete other than the rear section of the body which had been sawn off and replaced to form a pickup in typical Australian style.’ The aforementioned document also states that the body has been attributed to Phizackerley of Sydney.

Whatever the maker, chassis number ‘17117’ carries four/five seater tourer coachwork built to the highest standards and fitted with an elegant Victoria hood. Splendidly equipped with period lighting, wire wheels and opening windscreen, it is redolent of the fine carriages that paraded society ladies around fashionable parks in the Edwardian era.

Restored in the late 1980s, the Minerva was offered for sale at Brooks’ Quail Lodge auction in August 1998 (Lot 112) where it was acquired by a prominent private collector in the North West of England. Acquired by the immediately preceding owner in February 2000, the Minerva was then kept in dry storage until its purchase by the current vendor at Bonhams’ December Sale in 2010 (Lot 514). With its mechanical faults now sorted, the car is described as in generally good/very good condition and offered with current MoT and V5C registration document.