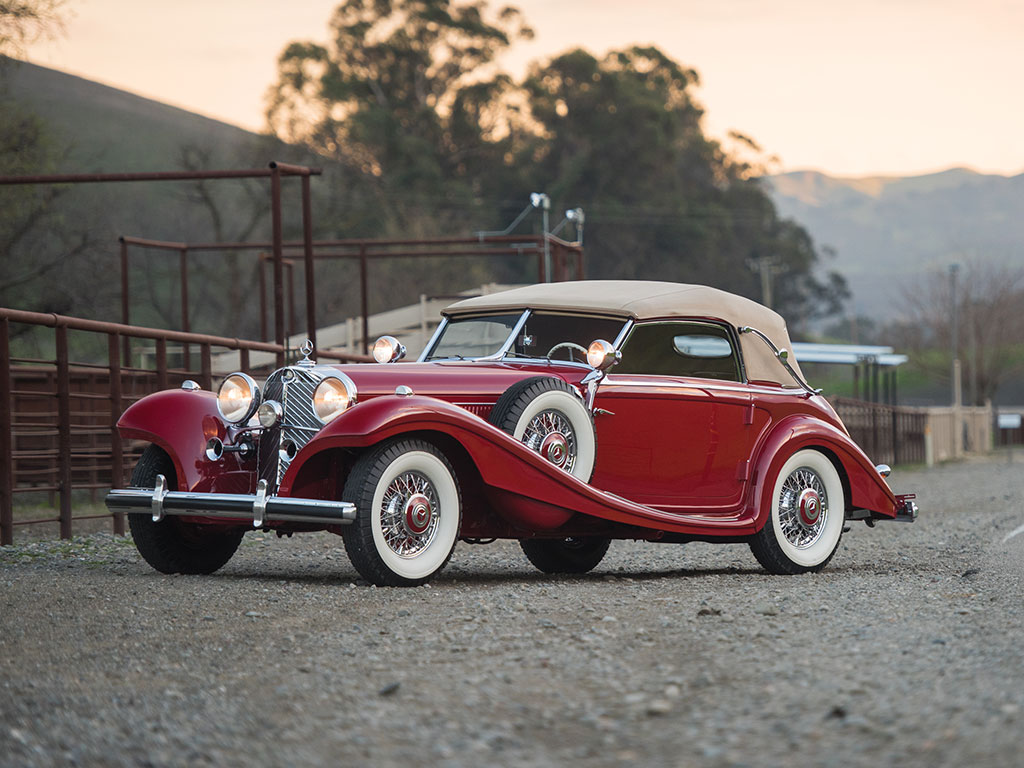 According to the Daimler-Benz archives, chassis and engine number 408371 were delivered under kommission number 311463 to a client in Paris on April 29, 1939. The bodywork is recorded by the factory as a Cabriolet A, which even in standard form was a striking automobile; however, this was no standard example. It was ordered with a raked vee’d windshield, a feature found on the iconic Spezial Roadsters of the period, which emphasizes both the length of the front end and the powerful thrust of the front fenders. Only one similar example of such a Spezial Cabriolet, produced on a 500 K chassis, is known to exist. The cabin offers sumptuous seating for two additional passengers behind the front seats, with fitted luggage aft, and being a late example, it also is fitted with the desirable five-speed transmission.

The car obviously made its way to the United States early in its existence. Its earliest known post-war owner was American operatic tenor James Melton, popularly known as “The Tenor of His Times” (also the title of a recent biography by his daughter). Melton made his collecting of interesting old automobiles—still something eccentric in the 1930s and 1940s—part of his public persona, using them regularly in public appearances and mentioning them on the radio. He was, it can be said without exaggeration, the best-known American car collector of the time. Accordingly, he was regularly offered automobiles, occasionally by original owners who still had them in the carriage house, and usually for next to nothing.

Melton seems to have used his 540 K regularly and extensively for much of the rest of his life. He and the car were photographed together many times, including at Indianapolis in 1947, next to Don Lee’s Mercedes-Benz W154 racing car; at Watkins Glen, prior to the Seneca Cup, in 1949; and in front of the Melton household in Weston, Connecticut. In his 1954 autobiography, Bright Wheels Rolling, he wrote of the fun that he had with his supercharged beast:

Most superchargers draw from the carburetor, but the Mercedes type blew through the carburetor. The whistle of the compressed air going past the obstructions and turnings of the carburetor made a noise that would lift the wig off a dressmaker’s dummy. Also, the supercharger didn’t run all the time, but only on demand, when you put your foot flat down.

It was standard on the last big passenger model Mercedes-Benz made before World War II, the 540K, and I used to have a lot of fun with mine. When I engaged the supercharger, people riding with me would go halfway through the roof and look wildly around for the panic button. They were ready to bail out.

Reflective of the car’s importance in James Melton’s life is that, even as he began selling his collection in the 1950s, the 540 K stayed behind. Only shortly before his passing in 1961 was it sold, as one of the final cars in his stable.