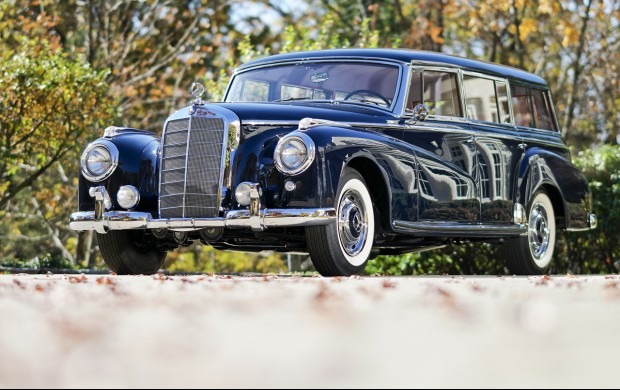 In 1956, there was no such thing as a production Mercedes-Benz station wagon. Although many heads of state and royalty used large, luxurious Mercedes- Benz 300 Series automobiles, for Mrs. Caroline Foulke, the granddaughter of the co-founder of the American Tobacco Company, they came up short in a particular regard – no extended rear cargo area.

This didn’t dissuade the resourceful socialite from walking into her New York City Mercedes-Benz dealership and ordering a Mercedes-Benz 300 C Sedan. She had a most unusual plan – to ship the vehicle from Stuttgart to the Binz coachworks company in nearby Lorch, where it would be converted into a station wagon to her specifications and reflecting her superb taste. Binz was more than game for the task. The company was known for transforming passenger automobiles into ambulances and other commercial vehicles. According to famed Mercedes-Benz restorer Bob Hatch, the entire roof of the sedan was removed and an innovative one-piece roof cleverly fabricated to replace it. Binz finished the metal work with a handsome wagon tail featuring a two-section tailgate. The original rear doors were modified with vent windows incorporated to augment ventilation. Finishing off the singular vehicle were 190 SL taillights that replaced the standard horizontal units, unpainted wheel covers, a livery of Medium Gray (DB 116) over red leather, and diagonal stripes from the chrome belt molding to the lower rear end of the front doors, in red and blue, matching Mrs. Foulke’s yacht club burgee. When the striking Mercedes made its debut in the States, there was nothing else like it on the road.

After Mrs. Foulke’s stewardship, the car was held by a series of collectors. One had it repainted in the elegant shade of Midnight Blue (DB 904), and a later caretaker sent it to Mercedes-Benz specialist Hatch & Sons for a partial restoration. The current owner, who was captivated by this unique automobile’s unusual grace, acquired the wagon in 2010 and invested more than $90,000 for additional restoration by the Mercedes-Benz Classic Center in Irvine, California. Of that, approximately $30,000 was spent to restore the wood interior features.