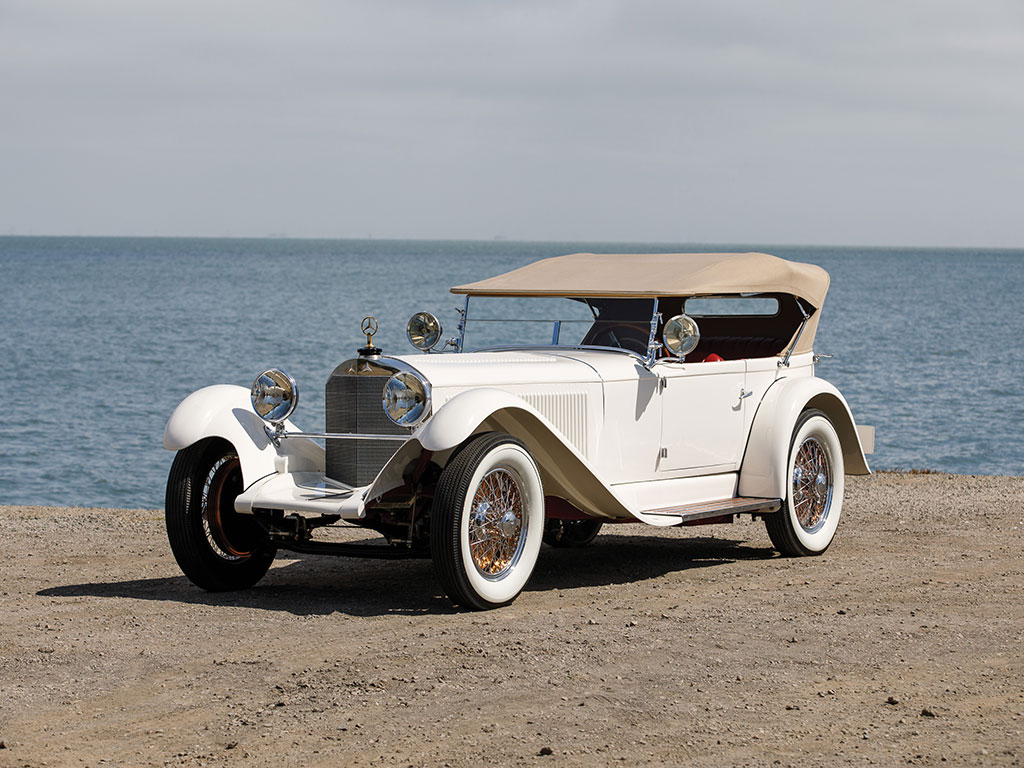 The Mercedes and its successor, the Mercedes-Benz, was among the first foreign automobiles to achieve a major toehold among American buyers. By the 1920s the company’s K and S models were some of the most expensive automobiles being sold in the United States, delivered mainly through the New York distributor to some of the wealthiest and most powerful people in the country, including General Motors scion Cliff Durant, theatre impresario “Roxy” Rothafel, and Al Jolson, the great comic singing star of vaudeville.

Jolson is best remembered today for his starring role in the first commercially successful “talkie,” 1927’s The Jazz Singer. In his time, however, he was much more than an answer to a trivia question. Known for his passionate, dramatic stage performances of various popular songs, he was one of the U.S.’s major stars of vaudeville in the Teens and Twenties, traveling the world to sold-out shows and turning out over 80 hit records. In many ways he was one of the first major American “pop stars.” He was also a patriot who traveled extensively to entertain troops during World War II and, at the end of his life, the Korean War.

The great performer was also a major automobile enthusiast, whose wealth enabled him to buy the finest cars available. He owned several marques, but was passionate about none quite so much as Mercedes-Benz, and owned three examples during the 1920s. Among them was this 26/120/180 Type S Sports 4, or four-passenger sports tourer, documented in its kommission paperwork as having been delivered to Jolson by Mercedes-Benz Company of New York in 1928. Period photographs, widely featured in the popular press of the time, depicted Jolson and his then-wife, actress Ruby Keeler, proudly posing with the new automobile, registered in California as 5M456.

Jolson maintained the Type S until 1947, when it was sold off his California estate to Brooks Stevens of Mequon, Wisconsin. An heir to the Cutler-Hammer fortune, a young Stevens was able to choose virtually any pursuit he desired. He chose design, and became one of the United States’ most famous and influential industrial designers of the 20th century. Revered as “The Seer Who Made Milwaukee Famous,” he created everything from the Miller Brewing logo to the Wienermobile, as well as numerous important designs for Studebaker. He loved fine automobiles and collected them with a passion, eventually operating the Brooks Stevens Automotive Museum to exhibit various treasures alongside examples of his own designs.

The Jolson Mercedes was a favorite in the Stevens Museum and remained on display there until 1990, a span of over 40 years. It is widely credited for having served for the design of Stevens’ best-remembered automobile, the Excalibur – America’s first and arguably best-quality “neoclassic.” It was also well known in the enthusiast community, inspiring interest from the likes of Automobile Quarterly, whose editor, Beverly Rae Kimes, wrote Stevens in 1977 and received the following intriguing response regarding the original ownership history:

It is an interesting car, in that it was originally owned by Rudi Carraciola. I acquired the car from Al Jolson’s estate in California about 1947. He owned three cars of this type, this phaeton, a Soutchack [sic] convertible coupe, and a town car . . . either a ‘K’ or an ‘S.’

I knew Carraciola in Europe prior to his death and he confirmed that this was his car, given to him by Mercedes-Benz for his brilliant showings with the SSKs.

In 1990 Stevens was finally convinced to part with the S by a California enthusiast, as what was described as “a mint original car.” Nonetheless, a year later the Mercedes-Benz was restored by the late Mike Fennel of Saugas, California, to its present appearance, including a beautiful cream finish, red leather upholstery, and tan soft top. Also at this time, the original dual side-mounted spares were relocated to the rear, visually lengthening the car and dramatizing its appearance.

The car was exhibited at both the 2006 and 2011 Pebble Beach Concours d’Elegance, but has otherwise remained well-maintained in museum display, with recent mechanical and cosmetic freshening undertaken for the current owner of 11 years.