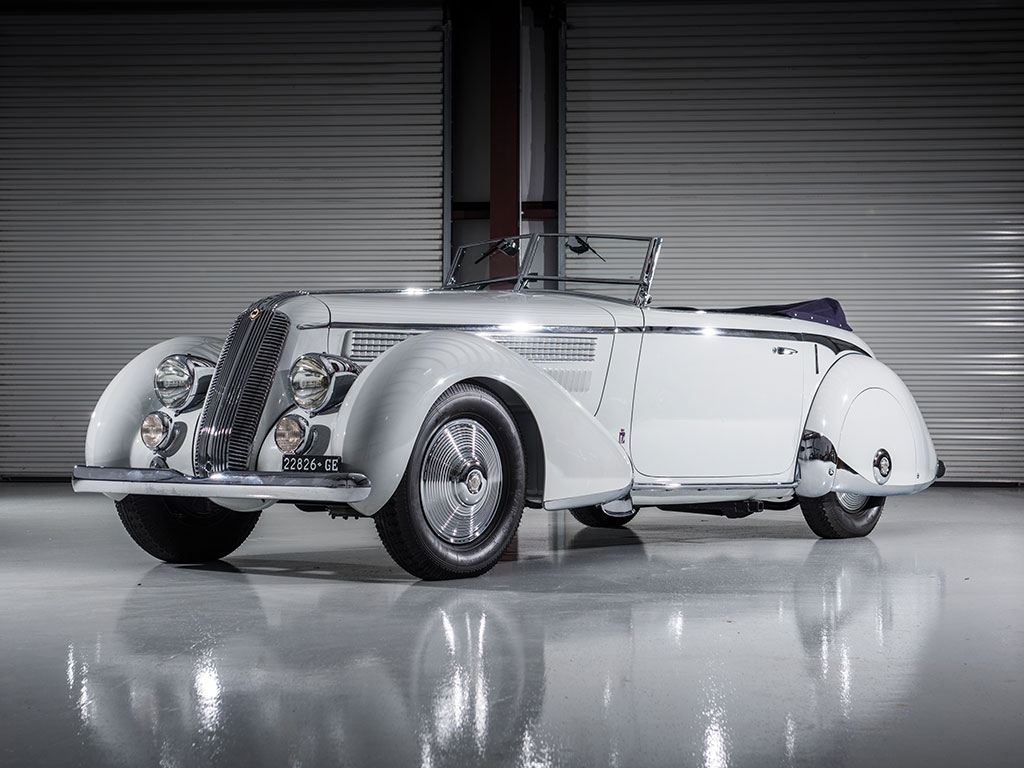 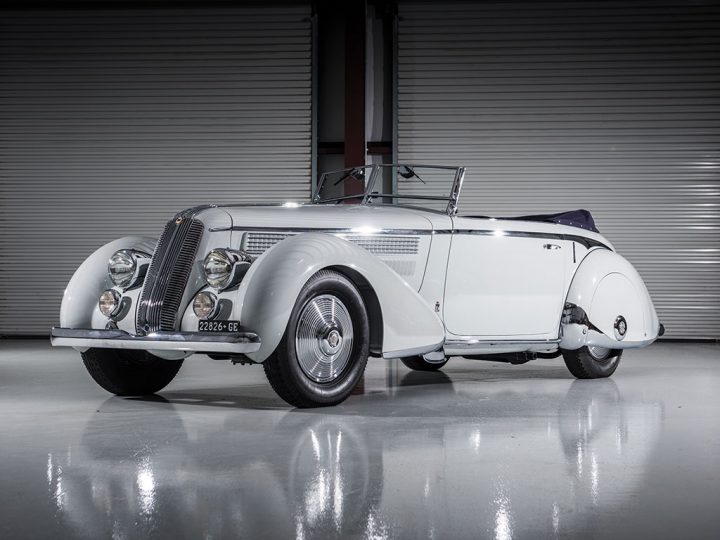 The present car, Tipo 233C chassis number 33-5313, is one of 328 Corto versions produced on the short-wheelbase 122-inch platform. Fitted with engine number 91-1171, it was delivered as a bare chassis to Pinin Farina in the summer of 1936 and clothed in a body designed by Mario Revelli di Beaumont, who took full advantage of the narrow-angle V-8 to create a rakish yet restrained cabriolet design, dubbed the Tipo Bocca. It was commissioned a Lancia dealer in Biella who ultimately ordered a total of six Bocca cabriolets in both corto and lungo chassis. 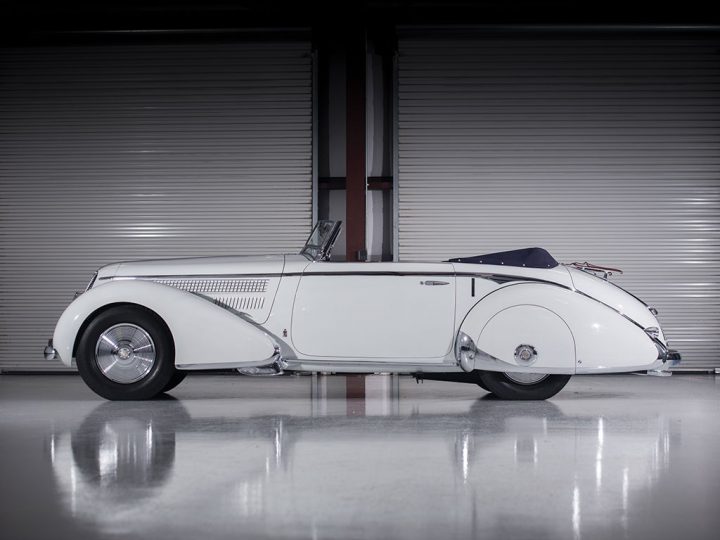 The aerodynamic profile features a sloping, rounded grille, whose horizontal bars are interrupted by a dramatic “waterfall” of chrome strakes running from the slim, elegant bumper to the base of a vee’d windshield. The peaked front fenders are separated from the body by rounded fairings that feature individually integrated headlights and driving lights, while the rear fender spats also contribute to the clean, smooth lines. The open car’s streamlined horizontal emphasis is reinforced by a chrome strake running the entire length of the body as well as horizontal engine compartment vents, features that are accentuated when the halves of the split windshield are folded flat. Gently curving body sides feature an early use of curved side windows. Highlighting the car’s restrained elegance was its subtle, pale grey paint with blue upholstery and power-actuated convertible top, the latter a great novelty for 1936. 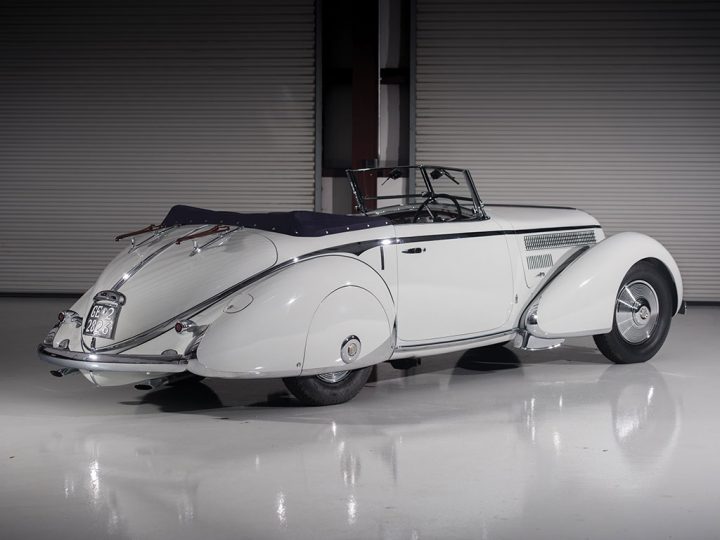 The newly completed cabriolet was displayed on the Pinin Farina stand at the 1936 Salone del l’Automobile, Milano, where it received the President’s Cup from the Registro Ancetre Club Italia. Following the show, chassis number 33-5313 was acquired by Ghiara & C., Lancia’s main agent in Genoa. Ghiara sold the car to Cav. Piero Sanguineti, a local industrialist, for about 75,000 Lire (the equivalent of about $4,200 at the time). In May 1937, Sanguineti showed the car in the inaugural Concorso d’Eleganza per Automobili, San Remo, where it received a class award. 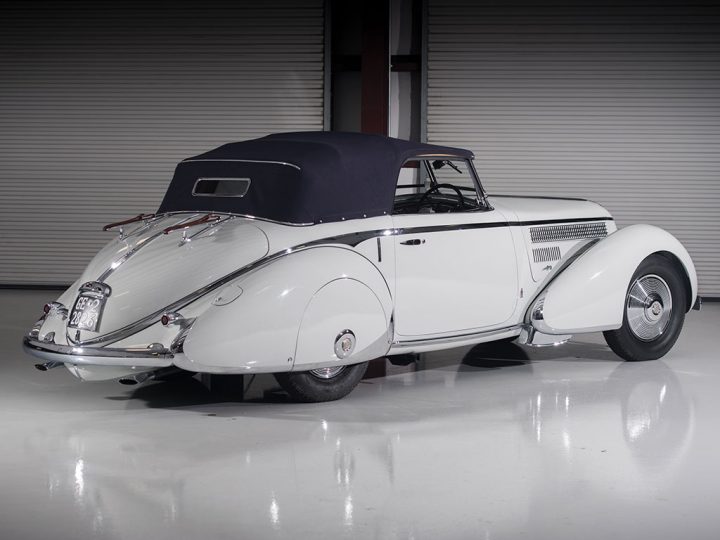 The car was subsequently purchased by Emil Uebel, Lancia’s German distributor, who apparently kept it in his main facility in Berlin-Charlottenburg. Wartime records no longer exist, offering no explanation of whether Uebel sold the car or retained it for himself, or how and where the car survived the conflict. But survive, it certainly did, and in early 1947 it was acquired by American collector Barney Pollard, as part of a package deal with two steam locomotives. Pollard shipped number 33-5313 to the United States and kept the car until 1980, when it was sold to Armand Giglio, former President of the American Lancia Club. Giglio held the car a further two decades, selling it in 2004 to an owner in Connecticut. Other than an older repaint, the car was in largely original condition, but with some deterioration of the body’s wood framing. The new owner undertook restoration of the wood framing, as well as some body preparation work. 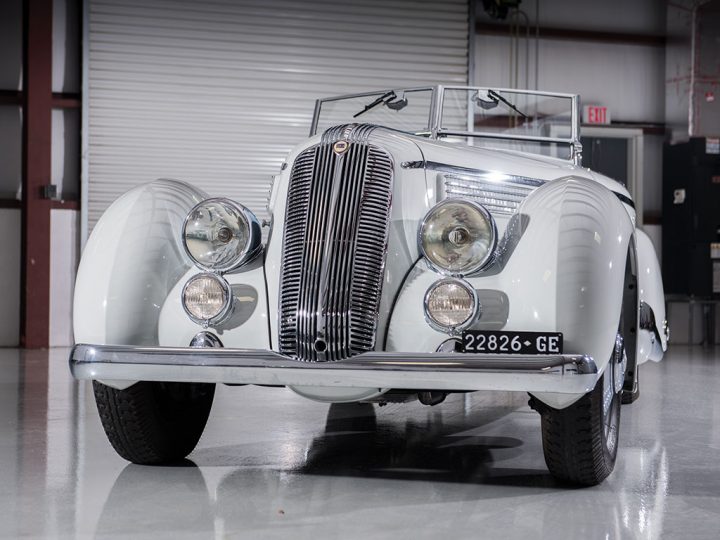 In this state the car was sold in late 2011 to Orin Smith, who commissioned Vantage Motorworks of Miami to complete the restoration to international concours standards. The finished car easily achieved Best in Class at the Classic Sports Sunday at Mar-a-Lago, and People’s Choice here at Amelia Island, both in 2013. The Lancia subsequently journeyed back to Italy, where it was judged Most Sympathetic Restoration at the 2014 Concorso d’Eleganza Villa d’Este, in the company of a thrilled Mr. and Mrs. Smith. 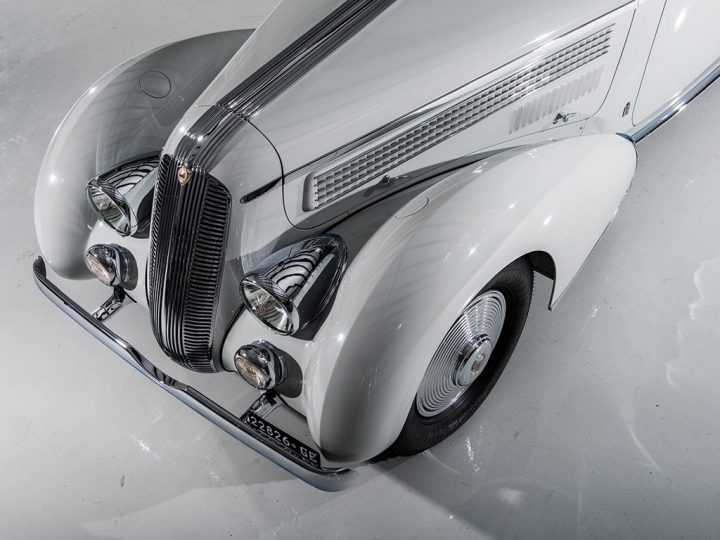 More recently the car was exhibited at the Petersen Automotive Museum in Los Angeles, as part of their “Rolling Sculpture” exhibit of advanced streamlined design. Notably, a sister car to this lovely Astura, in long-wheelbase form was awarded Best of Show at the 2016 Pebble Beach Concours d’Elegance, cementing its importance to design and elegance for the era. 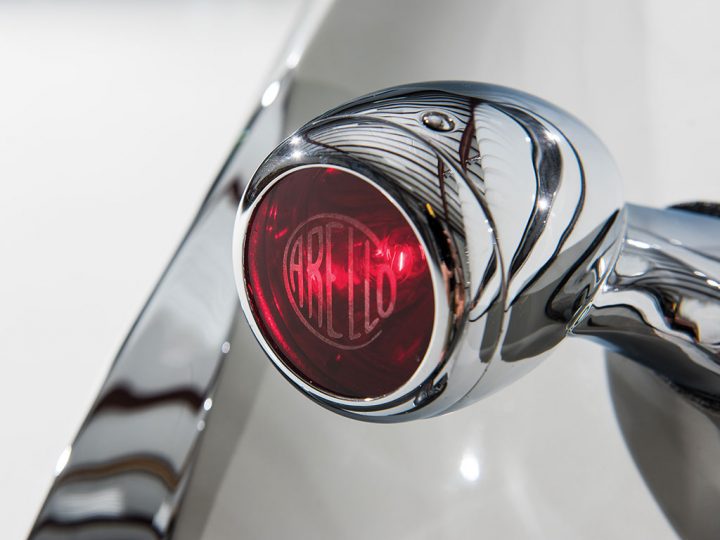 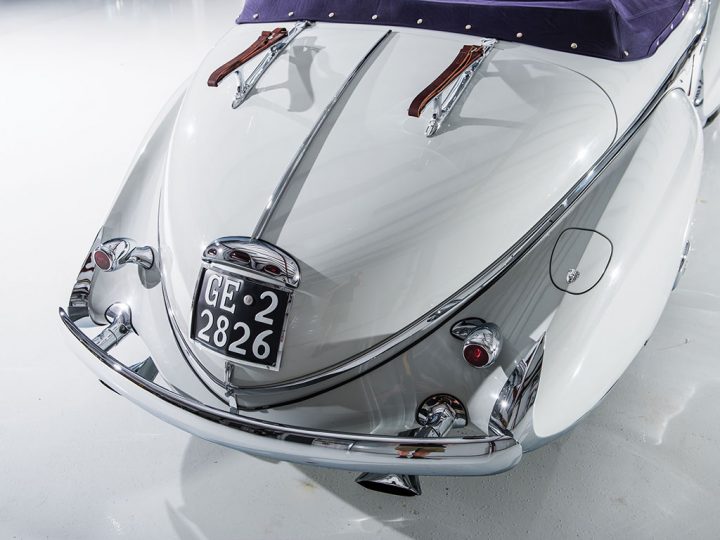 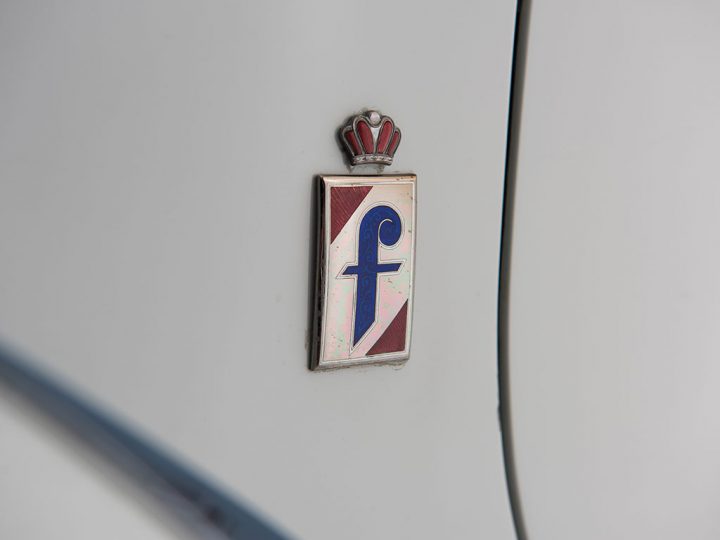 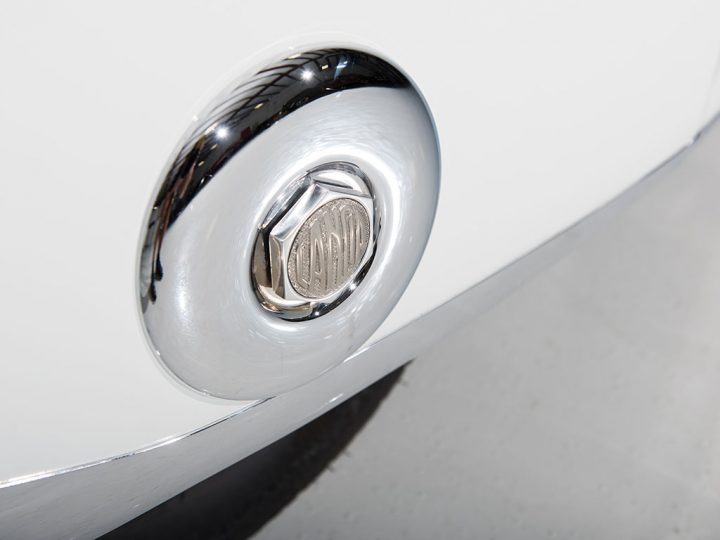 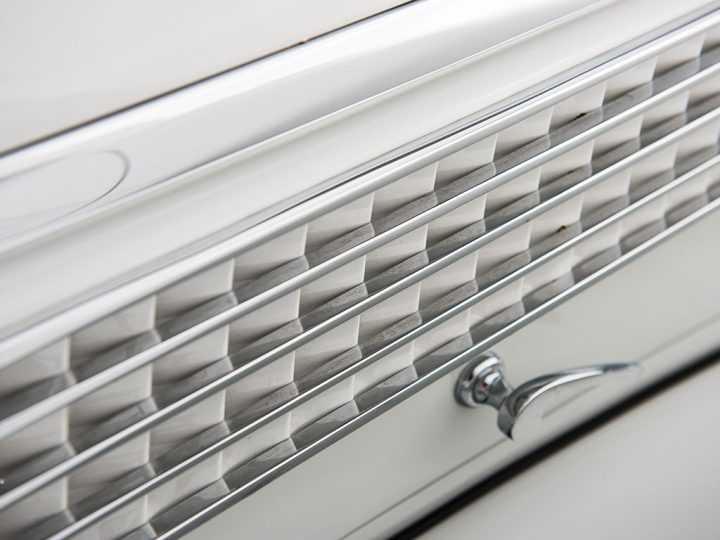 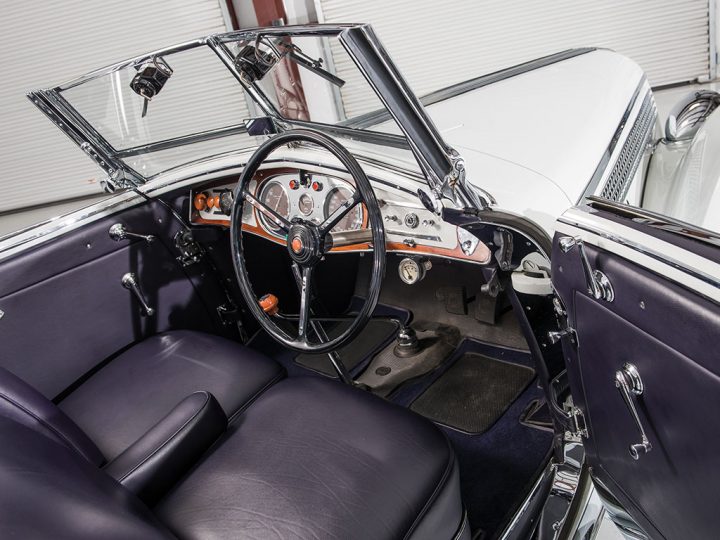 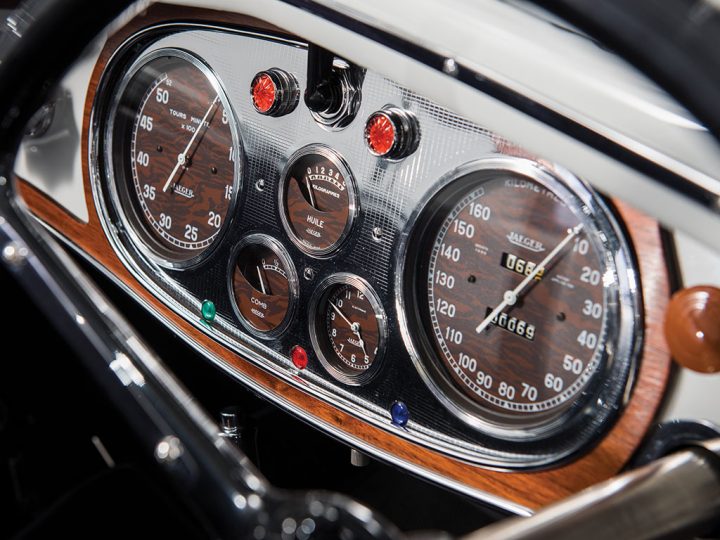 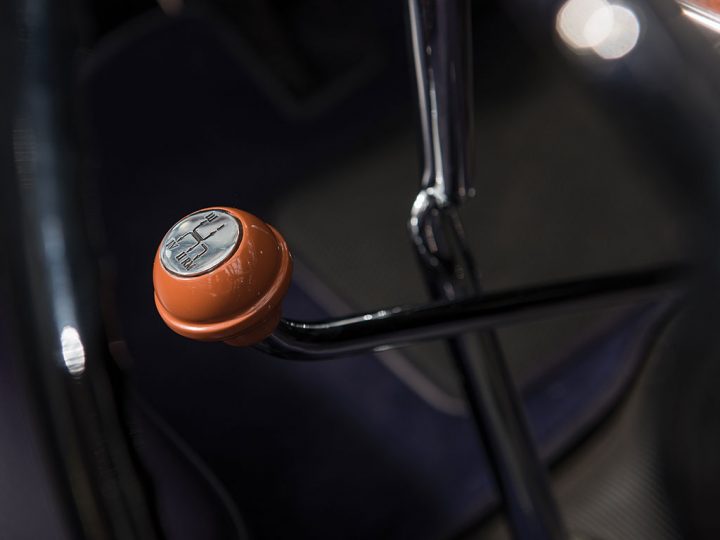 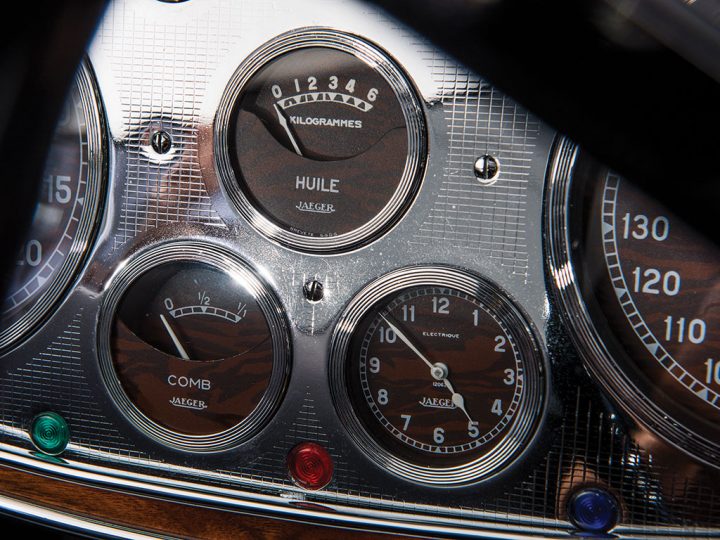 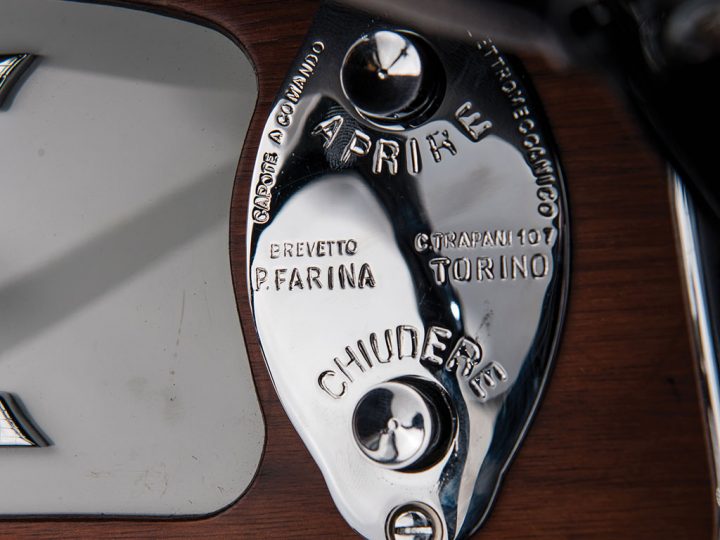 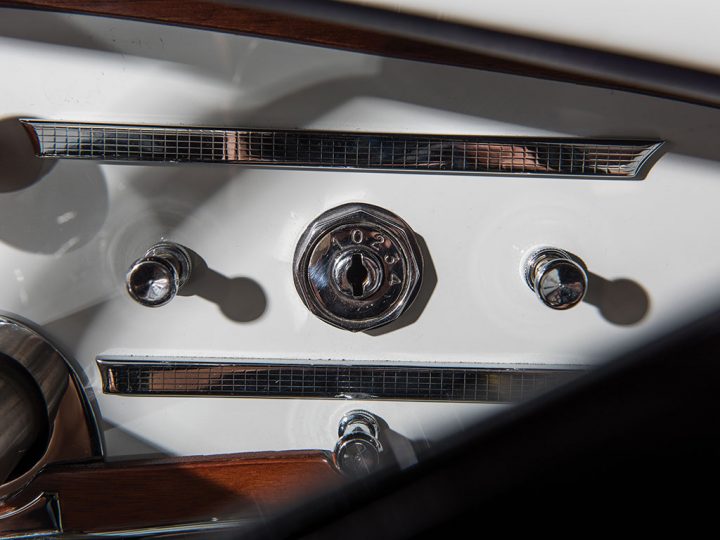 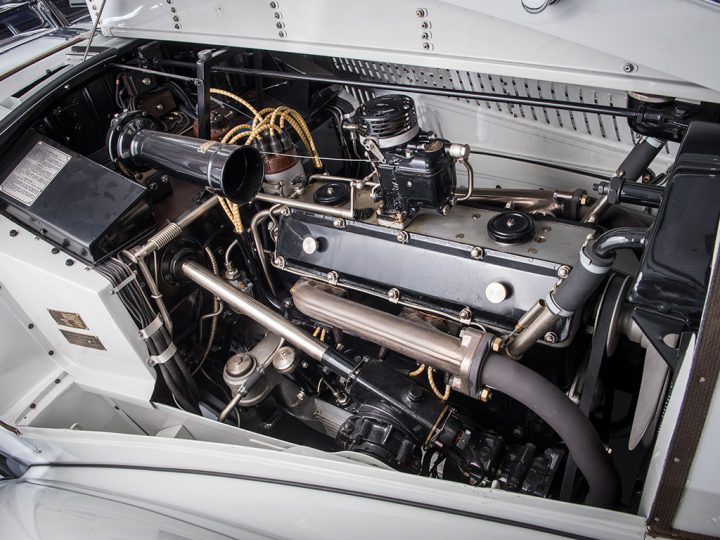 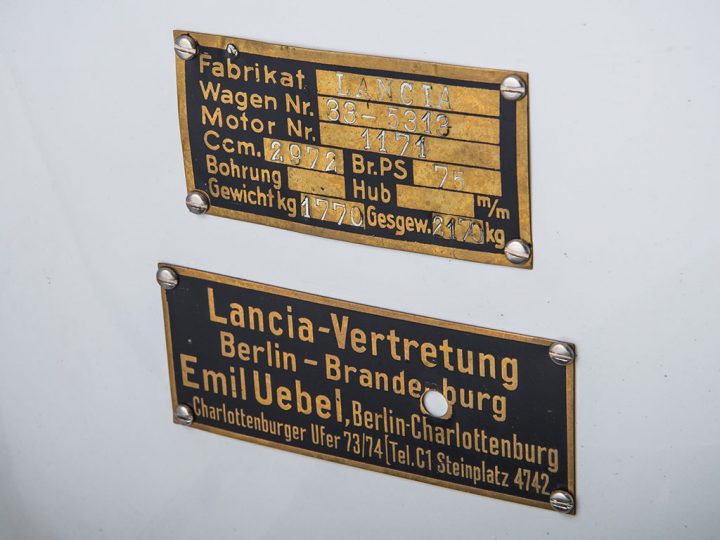 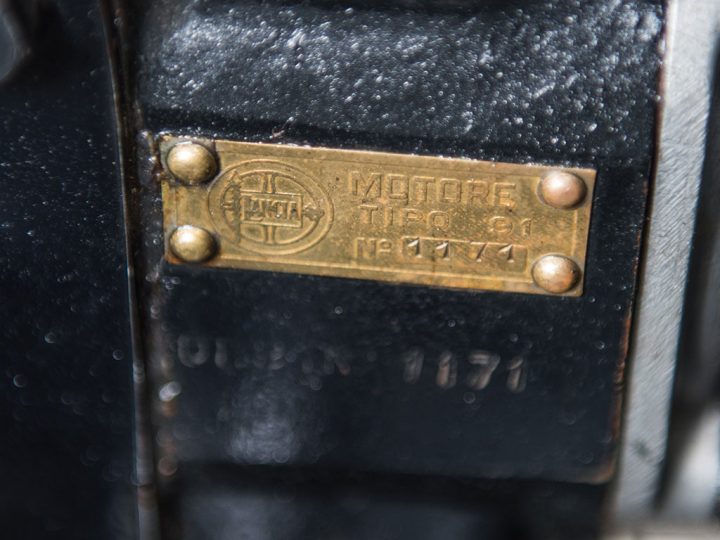 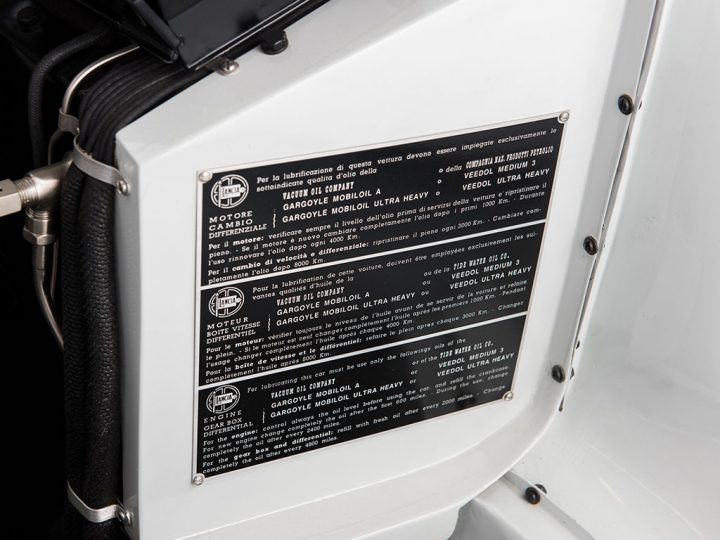 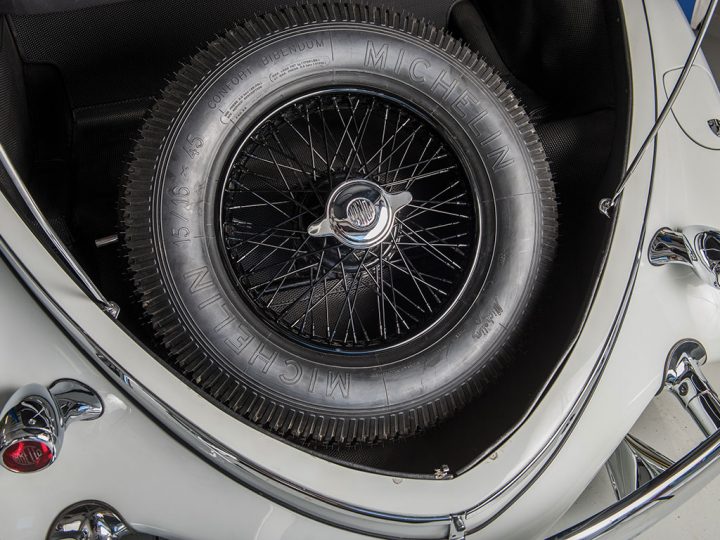