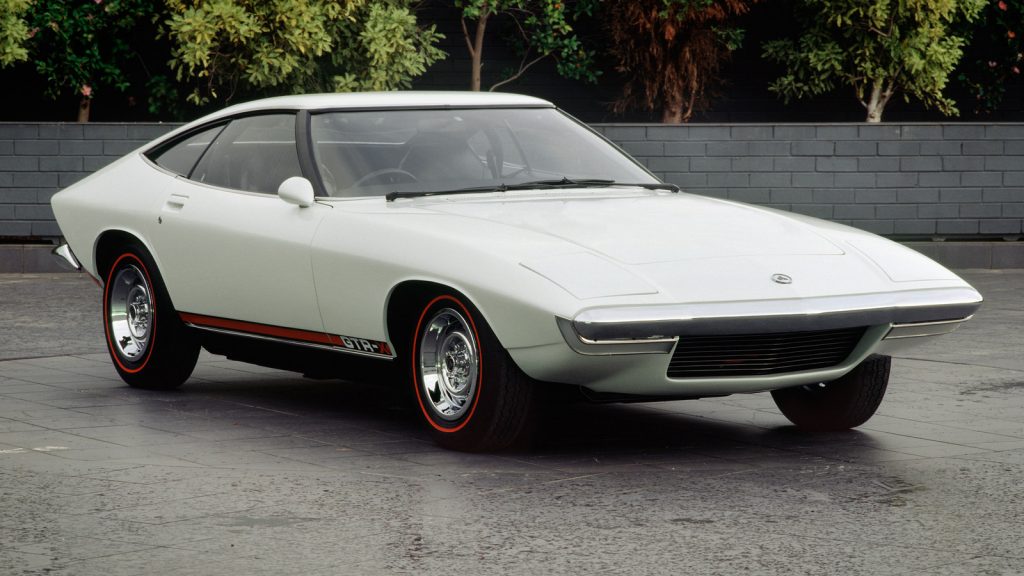 The Torana GTR-X was designed during the era of the LC series, and was seriously considered for production in the early 1970s. The GTR-X had a wedge-shaped fibreglass body featuring a hatchback rear access, and the prototype cars had LC Torana GTR XU-1 mechanical components.

When Holden released a promotional brochure about the GTR-X, they said … “Its long, sleek hood is accentuated by a low wedge-shaped grille. The body line sweeps up at the rear to an elevated tail light assembly. Simplicity is the keynote. It is achieved by concealed headlights, sharp windshield rake, recessed parking and turning lights, and flush petrol filler access and door handles. Front and rear bumpers assume the contour of the body. To identify the car, the GTR-X identification is contained within a crisp black and orange stripe running parallel to the rocker panel”.

The Torana GTR-X was highly developed by Holden from concept, and even though brochures, photography and promotional films were produced to show how serious they were in putting the car into production, the company was ultimately unable to justify the high cost of committing itself to production given the size of the Australian population in those days.

The only existing complete prototype GTR-X car has been recently restored back to its original white paint finish and remains on public display at the Salmon Street offices of Holden in Melbourne, Victoria. This car, originally white as pictured, was painted silver in the mid 70’s. It had UC Torana SL/E wheels fitted and a couple of other cosmetic changes (bonnet badge etc.) in an attempt by Holden to move the car with the times and “restore it”. During this period it toured motor museums around the country, including the National Motor Museum at Birdwood in South Australia. In 2003 the car was returned to its original build condition (white) by Car Shine in Melbourne, prior to being shipped to the US to the General Motors Technical Center at Michigan for the celebration of automotive design spanning the past 75 years.