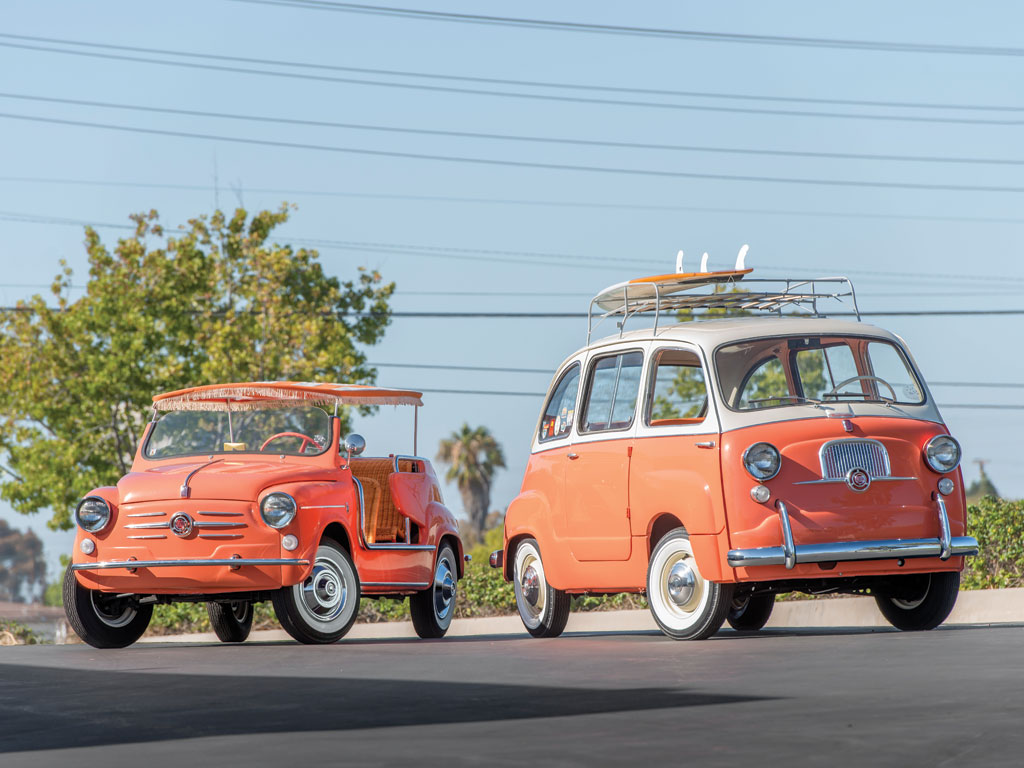 While the Multipla was all about practicality, the Jolly was meant for all-out fun. It was the brainchild of Fiat chairman Gianni Agnelli, who desired a small car that could be carried aboard his 82-foot ketch, Agneta, and be easily lowered over the side for local transportation at various Mediterranean ports of call. Agnelli’s yacht tender, an open-air 500 with wicker seats, cut-out doors, and a fringed surrey top, proved so popular that it was put into limited production by Italian coachbuilder Ghia. Through the Jet Age, it was the vehicle in which to “see and be seen” at the world’s most fashionable resorts.

The majority of Jollys were built on the 500 chassis. The four-cylinder 600 versions are considerably rarer, particularly in the United States, and they are fiercely sought after by Fiat enthusiasts.

The Multipla was introduced as a “station wagon” version of the 600, and it was intended to “multiply” the serviceability of the 600 for either family motoring or business use. It was designed around the model’s rear-mounted, water-cooled engine, which prevented the use of a traditional square back with a tailgate. Engineer Dante Giacosa relocated the driver over the front wheels and provided two large side doors for loading cargo. Both the front and rear doors were hinged at the B-pillar for easy access, and the rear seat could fold flat to provide space for carrying goods. An auxiliary radiator was mounted in the front, and the chassis utilized wishbone and coil-front suspension, unique gear ratios, worm-and-roller steering, and a slightly larger fuel tank.

As the Multipla was distinctively styled and instantly recognizable, it became one of the icons of 1960s Italian transportation, and many remained in service for years all over the world. It is recognized today as the predecessor of the modern passenger van and crossover vehicle, as it combines the best assets of a commercial hauler and a comfortable family sedan.