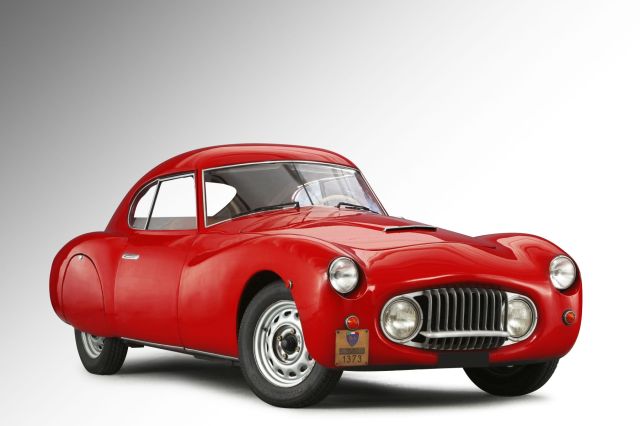 Italy’s Mille Miglia race, with its long straights, instigated designs of cars with superb aerodynamic bodies that allowed even small cars with small engines to get to rather impressive speeds. This was exactly the case of the Fiat 1100 S, the first Fiat produced just after the Second World War. With the profile of the Mille Miglia 508 C, the Fiat managed a V-max of 150km/h, thanks to its streamlined body, designed by Fiat’s own design department, under Giuseppe Cogno, despite a modest 51bhp (which wasn’t unimpressive for its time given that the engine size was just 1.1-litre). With this kind of performance the coupe got a good shot at 1948 Mille Miglia, with the cars placing second, third and fourth, behind the Ferrari 166 of Biondetti/Navona. Incidentally, that was the first time that a Ferrari won an important race.

The Fiat 1100 S Berlinetta has a body by coachbuilder Rapi, who had had first made the body for a shortened Fiat 1400, before mounting the same body on this car. According to the certificate from the Automotoclub Storico Italiano (ASI), Rappi was the first to make a steel body on the Fiat 8V, and this may have been a prototype for the more famous one that followed. The front end with the two projecting grilles topped with two lamps on the top of the wings, is indeed very close to that of its more powerful sibling. The car comes with FIVA papers and its ASI plaque number of 1373 was issued over thirty years ago. It has been a part of several important collections, including that of Mario Righini, and has participated several times in the Mille Miglia historic, specifically the 2000 and the 2001 editions. The engine was overhauled in 2009 and the car drives beautifully. Having benefited from a previous restoration, the car now offers a beautiful patina. With just 401 units made, this is a very rare car, that is not only very interesting, but is also eligible for many international historic events.
Italian registration.