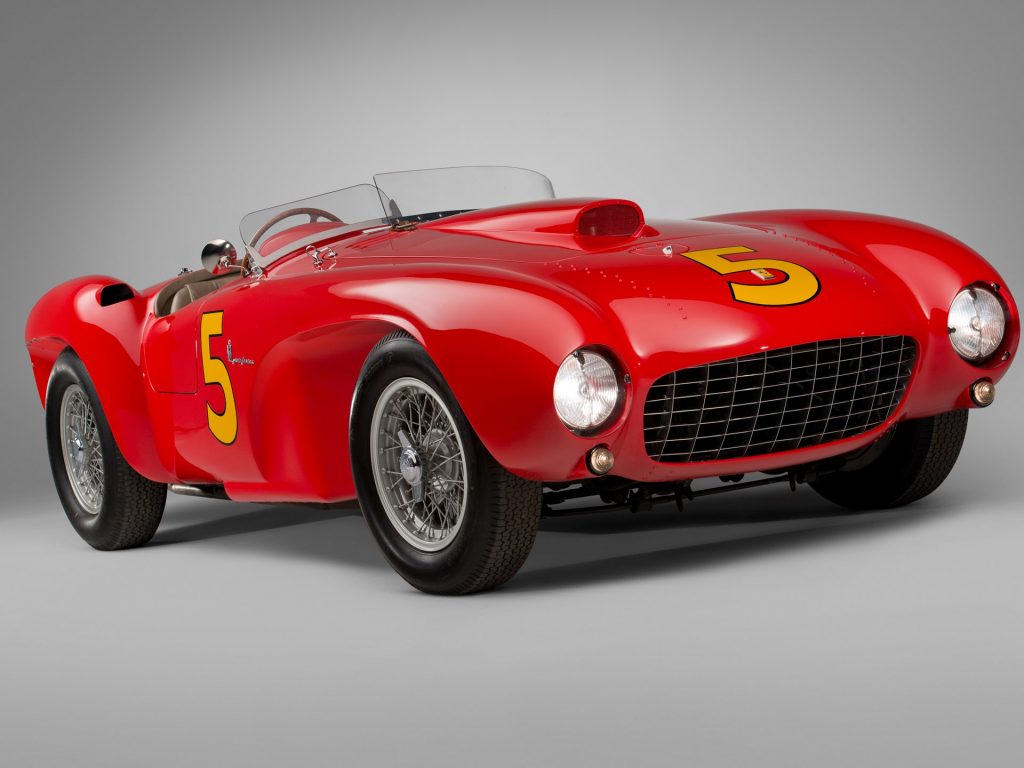 During the 1953 season, Kimberly’s 4.1 Vignale Spider was quite competitive, even finishing 3rd in championship points, but the car’s brakes sometimes faded from overheating, which prevented the driver from truly taking advantage of the 340’s raw power and torque. As a preferred Ferrari customer, Kimberly had an open dialog with the Maranello factory about this issue, and he soon clarified that he wanted specialized bodywork on his next Ferrari, in the interest of improved brake cooling.
Pinin Farina, which had earned the contract to body customer versions of the 375 MM competition berlinetta that debuted at Le Mans in June 1953 (and really made a name for itself at the subsequent Carrera Panamericana), truly outdid themselves when crafting the body for Kimberly’s new car. By late 1953, the design firm had already built the first two examples of the twelve spider bodies that would eventually adorn the 375’s Type 102 chassis. For this third car, however, they took innovative measures to accommodate Kimberly’s request, resulting in a rather influential piece of work, which Kimberly himself evidently sketched out for them.
Cutting away the trailing sections of the fenders behind the wheels, Pinin Farina crafted one of the earliest examples of a pontoon-fender sports racer, paving the way for Scaglietti’s yet-to-be-born 250 Testa Rossa, which is more commonly credited as the design’s progenitor, and dozens of other purpose-built sports racers. The new coachwork was to be the only such body ever mounted on a 375 chassis, making the resulting car a one-off and absolutely stunning, particularly when considered in profile. It should be noted that this one-off 375 was Sergio Pininfarina’s first full commission, which he made known to Dave Cummins at Meadow Brook in 1989.
Chassis 0364AM was the eighth of twenty-six 375 MM examples that were eventually constructed, and it completed frame assembly at the Maranello factory on September 21, 1953. Four days later, it entered Pinin Farina’s plant to receive its innovative bodywork. In addition to the important fender design, the body featured such performance cues as a large hood scoop to improve air flow to the prodigious F1-derived Lampredi V-12, a single windscreen, and a rear-centered external fuel filler for optimal weight balance. The car’s paint is a shade of red that was mixed by General Motors’ color lab and dubbed Kimberly Red, after Kimberly called his old friend Harley Earl at GM and asked him for help in designing his own special color.
Taking delivery of the rousing 375 MM, Kimberly, who had visited the factory repeatedly to monitor the progress of the car, decorated the car with #5 and proceeded to do nothing less than dominate class C Modified competition during the forthcoming season. Before he could even begin, however, SCCA scrutineers did not take kindly to his unusual, new Ferrari, as they were unsure if it assisted with brake cooling or if it actually improved turbulence in the wheel wells. Evidently, it wasn’t until fellow privateer racer John Fitch put in a word that the matter was dropped, so long as a three-inch tab was inserted in the wheel well.