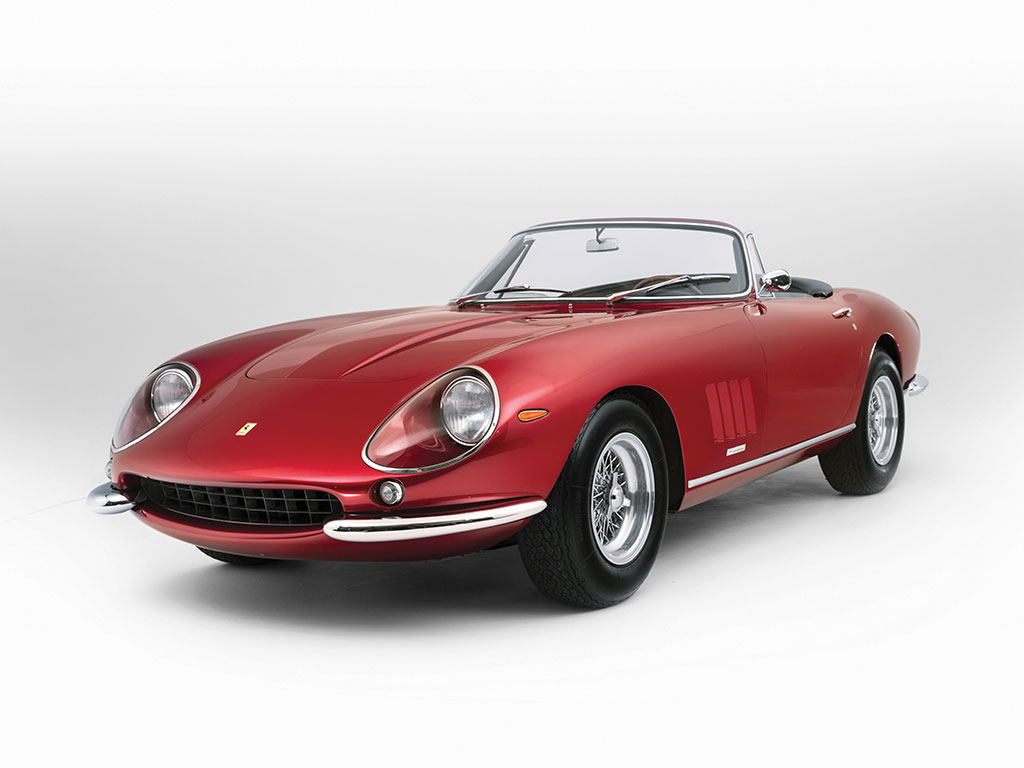 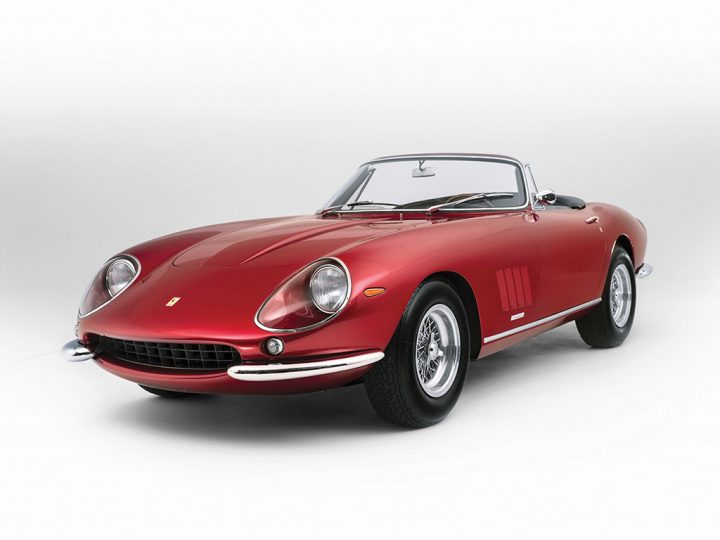 “ONE OF THOSE RED ITALIAN THINGS”

For the majority of the public, the introduction to one of the most seductive Ferraris ever built was on the silver screen, in the 1968 hit film The Thomas Crown Affair. The car’s time on screen was short, but its impact was monumental to the film’s leading actor.

Entering stage left, Steve McQueen as Thomas Crown is walking alongside Biff McGuire as Sandy. Sandy is lecturing Crown on his frivolous spending habits, and as the pair cross the street and pass parked cars en route to the sidewalk, it is clear that Sandy no longer has Crown’s attention. What does have the attention of both the character Thomas Crown and petrolhead Steve McQueen is a dark red 275 GTS/4 NART Spider, Ferrari’s newest drop-top sports car. In the movie, that “red Italian thing” belonged to Faye Dunaway’s character; in reality, Steve McQueen fell head over heels for the car and purchased one for himself shortly thereafter. 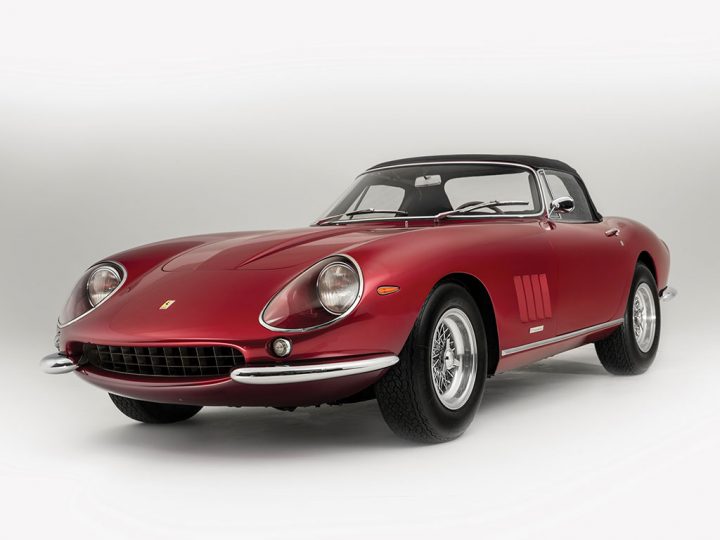 However, the NART Spider’s story does not start with Steve McQueen, Faye Dunaway, or The Thomas Crown Affair, but with Luigi Chinetti. Following the introduction of the 330 GTS and the 275 GTB/4, Chinetti felt as if there was a gap in Ferrari’s line-up. The 330 GTS was intended to be a more luxurious top-down cruiser, while the 275 GTB/4 was a more aggressive grand tourer. To Chinetti, what his American clients needed was a convertible 275 GTB/4, offering the best aspects of both cars, and he successfully convinced Enzo Ferrari to build it for him.

Although the very first NART Spider finished 17th overall and 2nd in class at the 1967 12 Hours of Sebring, with Marianne “Pinky” Rollo and Denise McCluggage behind the wheel; was featured on the cover of the September 1967 issue of Road & Track; and starred alongside the King of Cool in The Thomas Crown Affair, the NART Spider proved to be a tough sell for Chinetti. Just 10 examples would be built, even though it won the hearts of enthusiasts worldwide and is considered today to be one of the most beautiful and desirable Ferraris ever to leave Maranello. 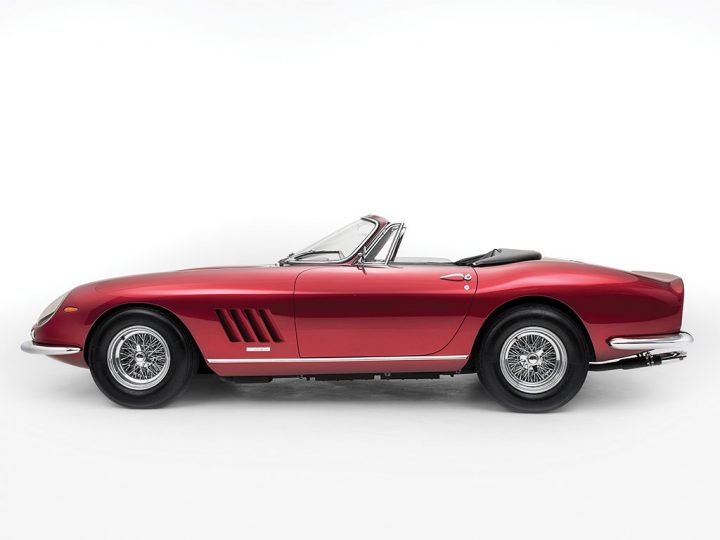 As the brainchild of Luigi Chinetti, it was only natural that the vast majority of NART Spiders were sold to his own customers in the United States. The very last NART Spider to leave the factory, however, would be the only example to remain in Europe.

That particular NART Spider, chassis 11057, was not only the final NART Spider and the only European-delivery example, but also the third-from-last 275-series Ferrari constructed. Originally finished in Grigio Scuro (20-E-166) over a Nero (VM-8500) interior, this would be the only NART Spider to wear that colour combination. It was sold new through Concesionario Tayre of Madrid, Spain, to a Spanish Colonel of the Foreign Legion in February of 1968. The car was allegedly first registered under his ownership on Spanish Sahara license plates, yet it is unclear whether the NART ever made the voyage to North Africa. Chassis number 11057 was later returned to Tayre and was then sold to José Segimon, also of Madrid, and registered on Spanish license plates M 3249 BP. 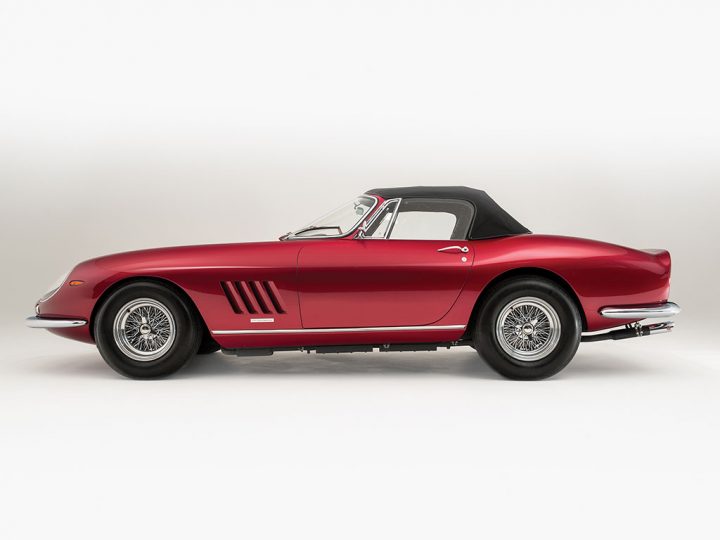 Segimon owned a number of significant racing Ferraris during his lifetime, including a 166 MM Barchetta and a 750 Monza. It should be no surprise that Segimon wanted to test his newest Ferrari at its limit, and he drove it on the track on at least one occasion, in 1980 at the Circuito del Jarama, just north of Madrid.

By 1982, chassis number 11057 was said to have left Segimon’s ownership and have moved to England, where it was refinished in red. In July of 1983, it was sold to the Swiss collector Albert Obrist of Gstaad, Switzerland. Obrist had the car fully restored in Italy and refinished in a dark grey metallic. He showed the car frequently at a variety of Swiss events over the course of the next 12 years, allegedly gifting the car to one of his daughters.

Sold by the Obrist family in 1995, the spider next passed through both Chris Cox and Carlos Monteverde’s distinguished collections before being purchased by Bernard Carl of Washington, D.C. In his ownership, the NART Spider was kept in the United Kingdom and shown at a variety of events there. From 2000–2001, the car was repainted its current shade of dark red metallic by Terry Hoyle and fitted with Borrani wire wheels. Following its repaint, the car was featured in the January 2005 issue of Octane magazine (issue #19), as well as the February 2008 issue of Thoroughbred & Classic Cars. Also during his ownership, the NART Spider was certified by Ferrari Classiche in October of 2007, thus confirming its status as a fully matching-numbers example. 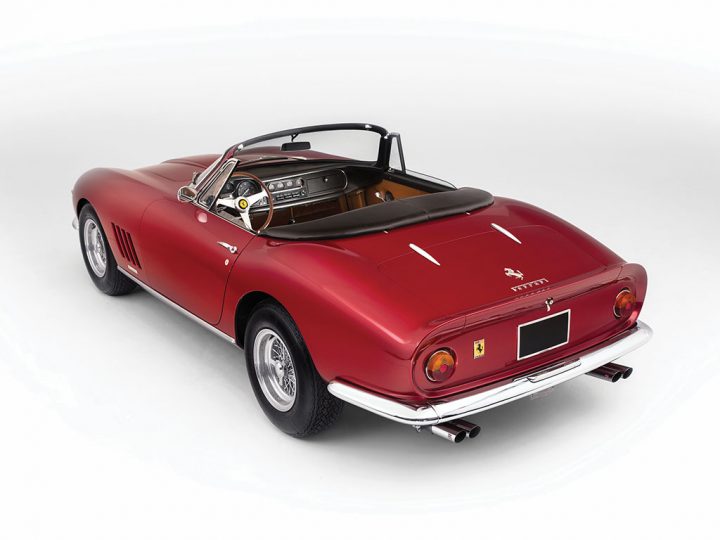 In October of 2009, the car was sold from Mr Carl’s collection to Lord Irvine Laidlaw. Upon receiving his new NART Spider, Lord Laidlaw immediately sent the car to O’Rourke Coach Trimmers in West Sussex in the United Kingdom to have its interior re-trimmed in its current beige. Still wearing its dark red metallic paintwork, recalling its sister car featured in The Thomas Crown Affair, it presents very well overall, having been enjoyed by Lord Laidlaw over the past few years. It was even driven by his wife on the Ladies Classic Car Tour of Tuscany in 2011. 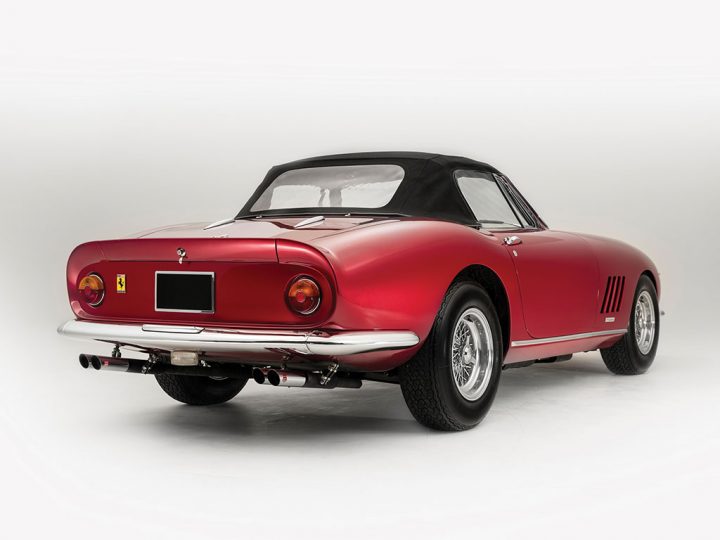 Over the course of Ferrari’s illustrious history, the company’s most sought-after vehicles have been the front-engined V-12 grand tourers of the 1960s. Amongst these, the handful of limited-production convertibles is the most desirable, with the sublime 275 GTS/4 NART Spider reigning supreme. The NART Spider is a vehicle that has stood the test of time in terms of sheer automotive drama, character, and splendour. An absolute thrill on the open road and a sure-fire entry to any concours event on the planet, the NART Spider is not only a vehicle with few peers—a Ferrari that many desire to own, drive, and enjoy—but also a dream that few can realize. 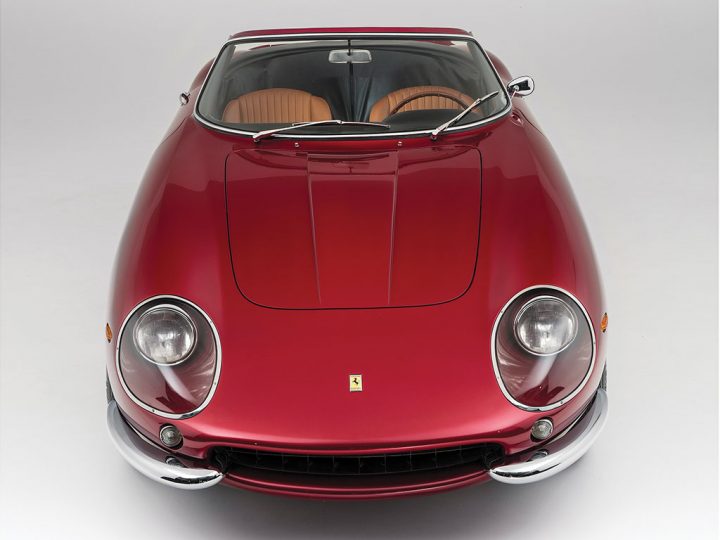 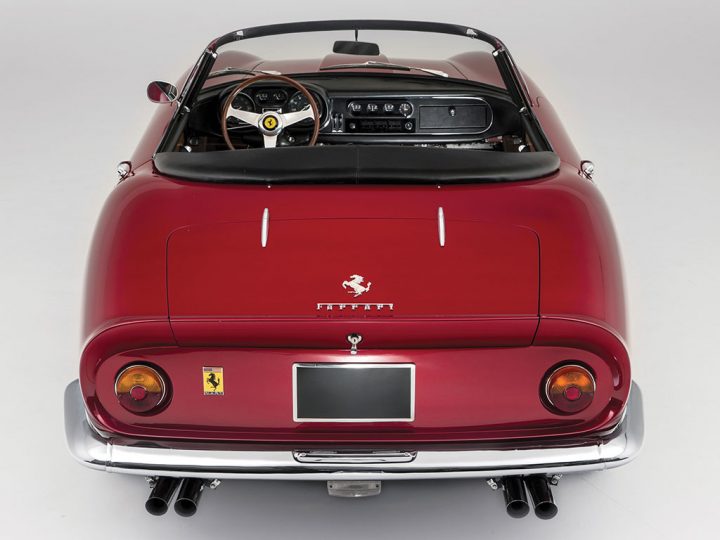 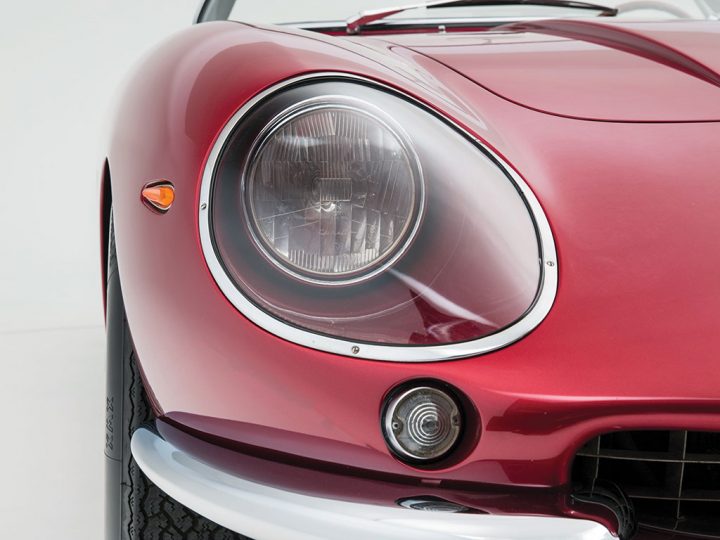 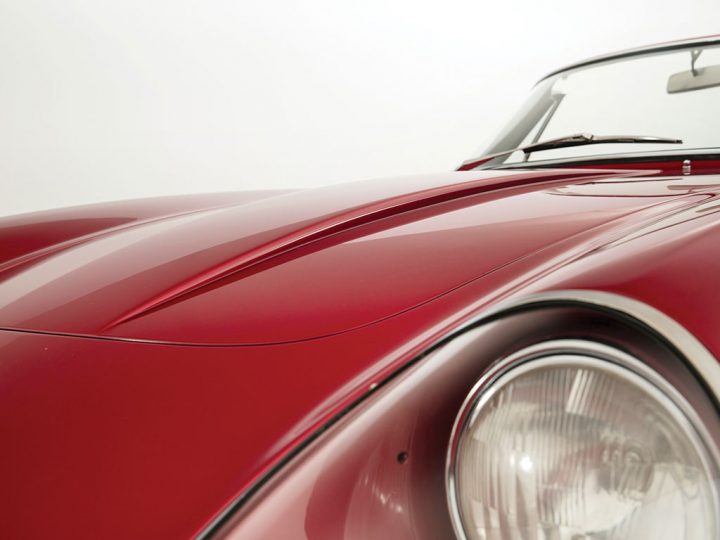 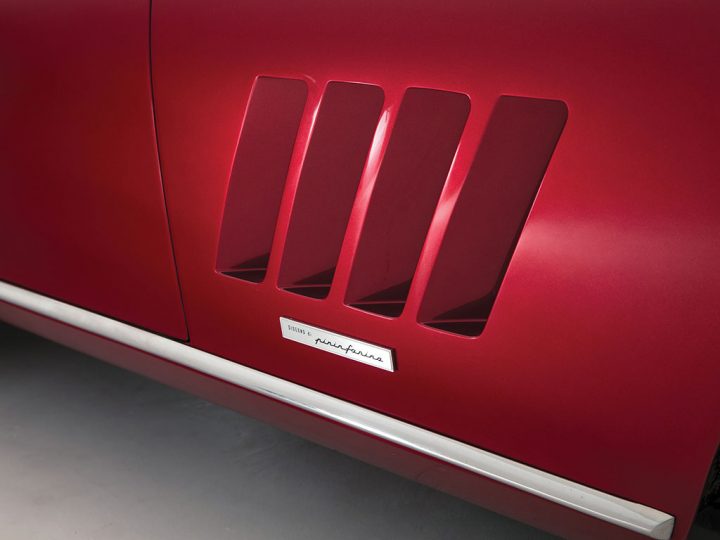 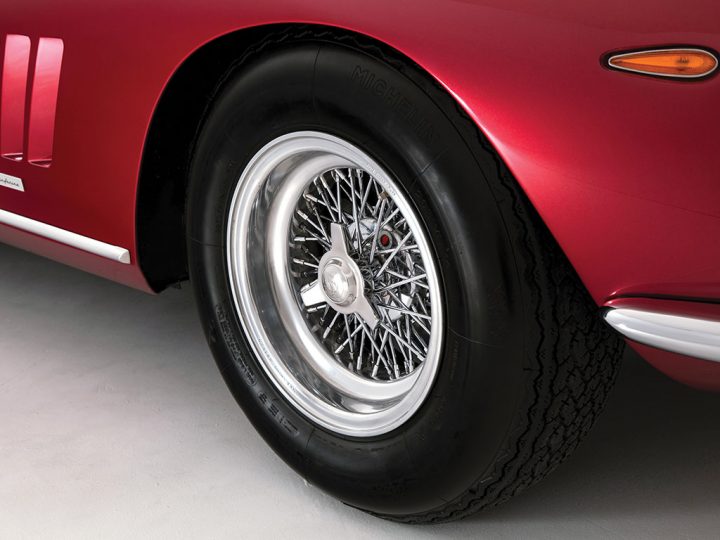 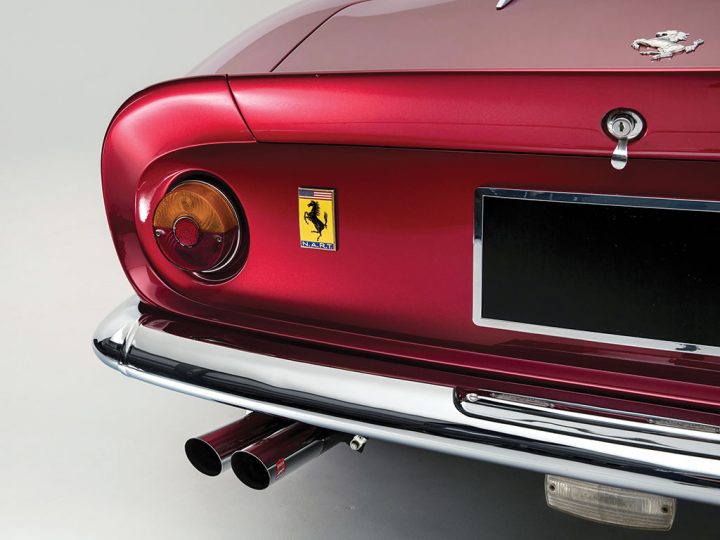 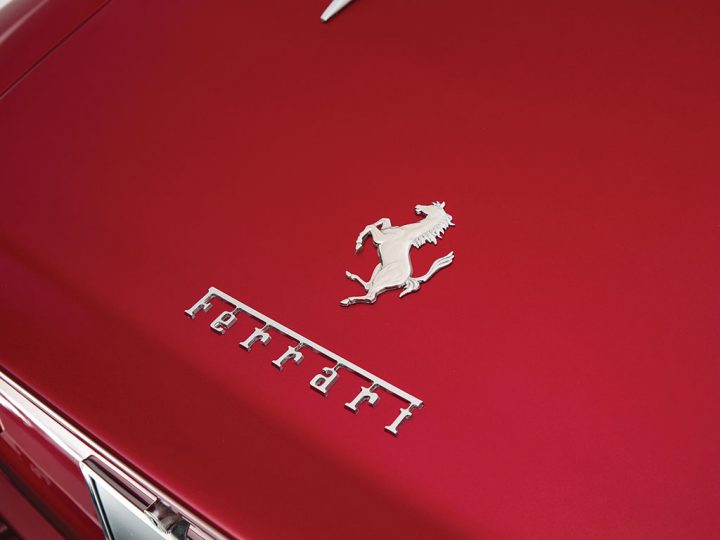 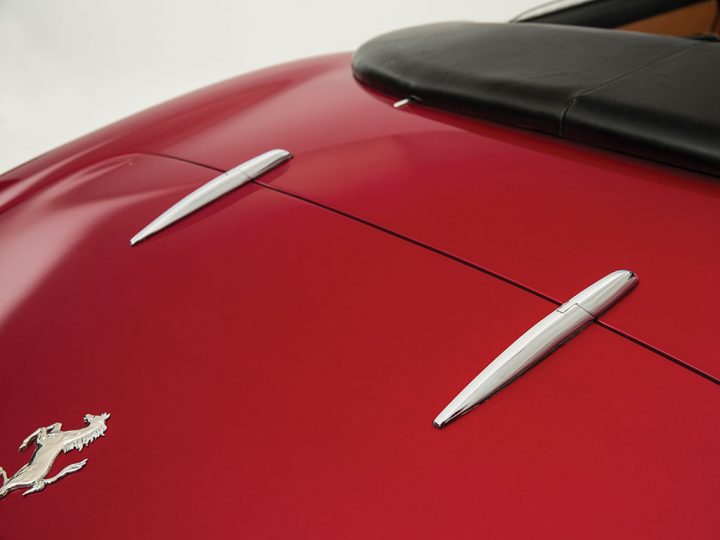 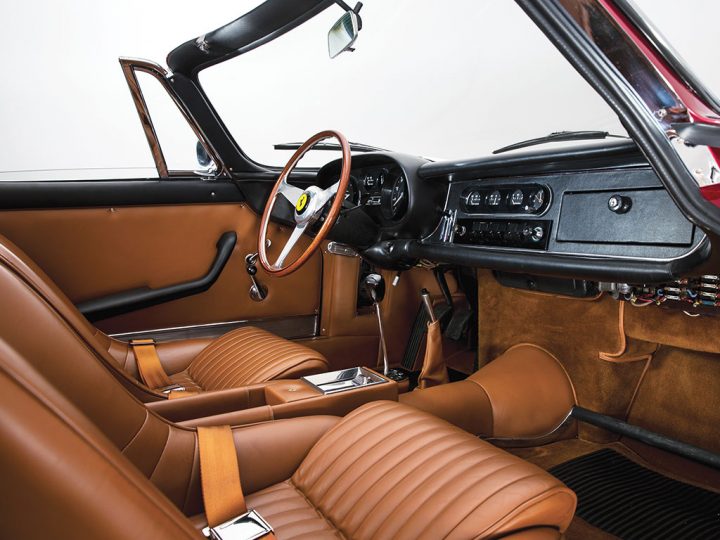 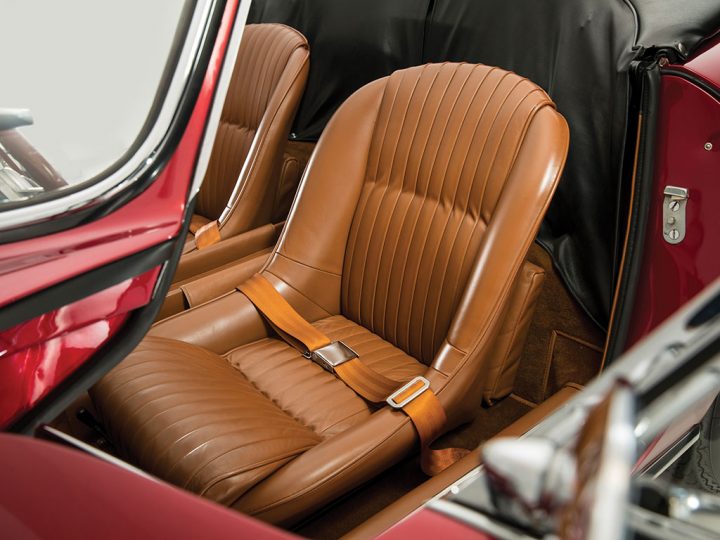 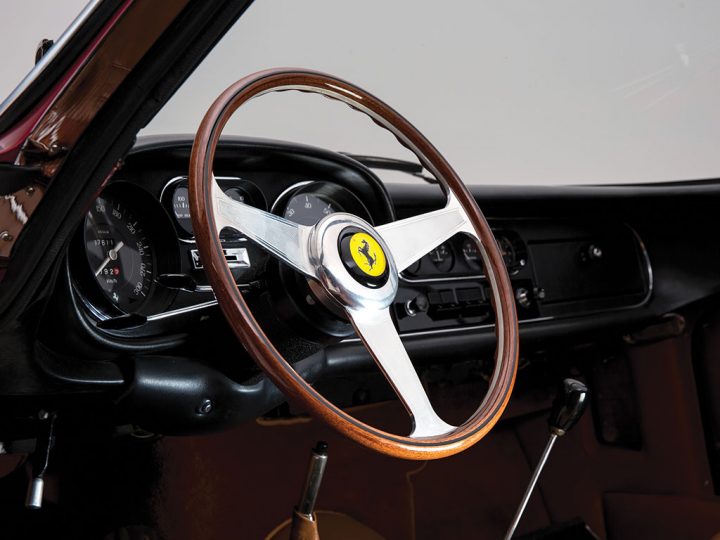 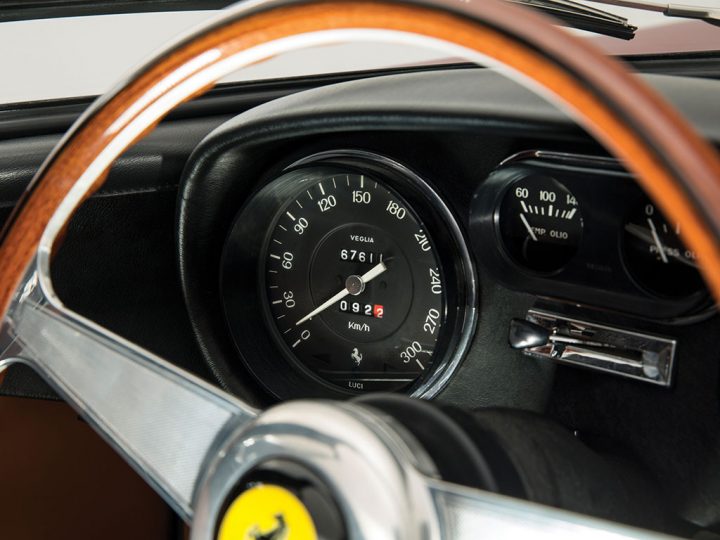 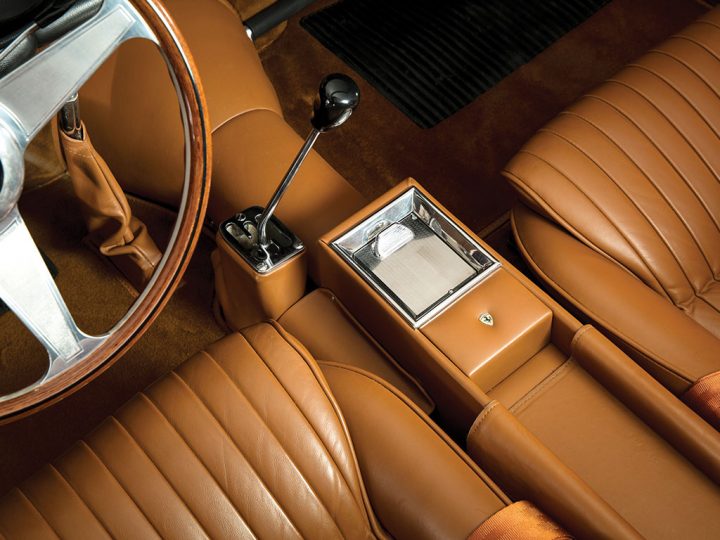 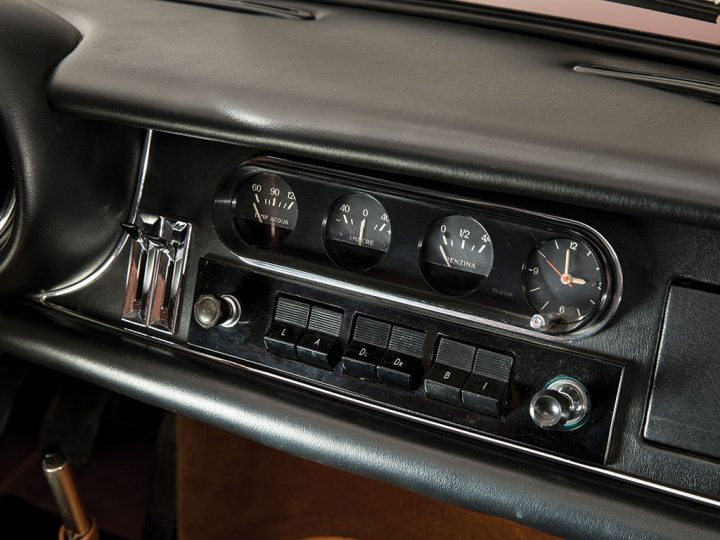 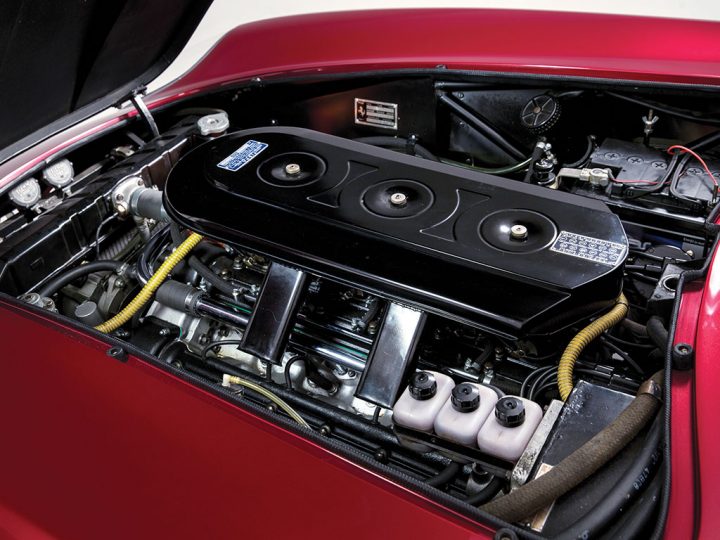 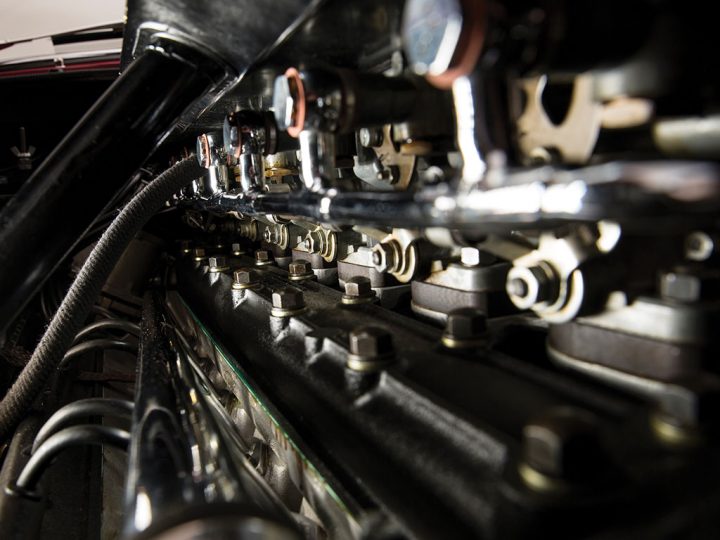 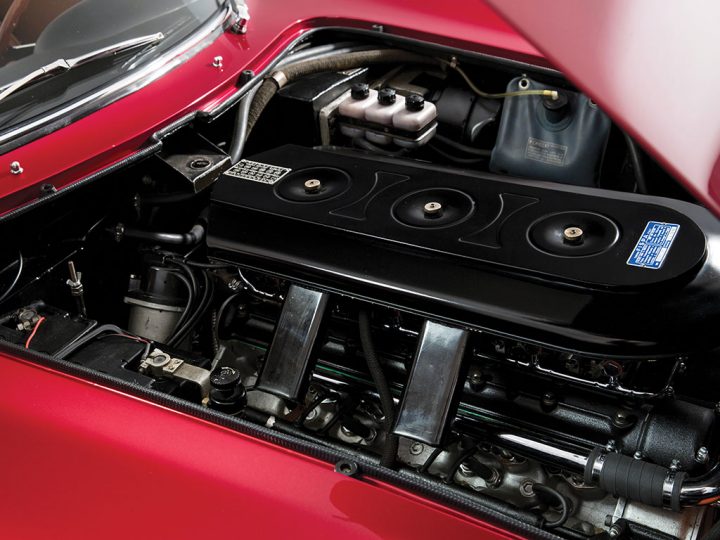 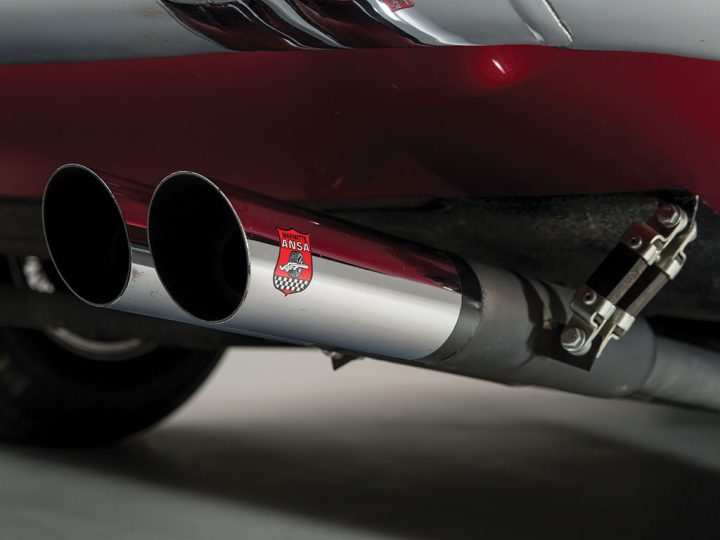 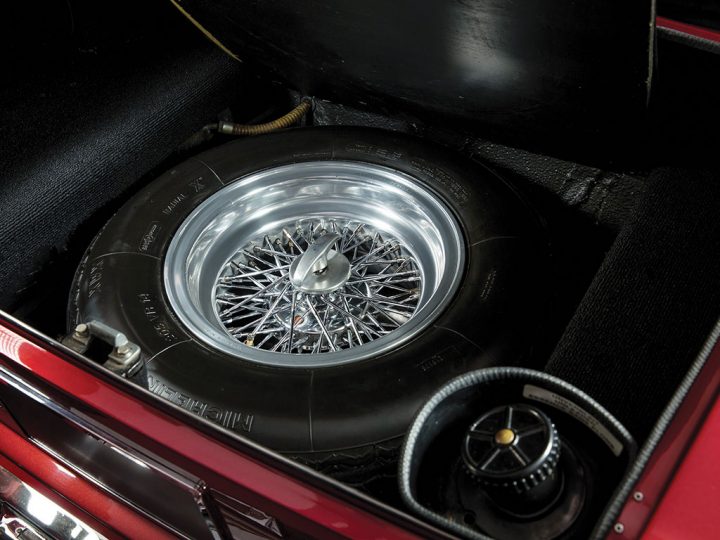