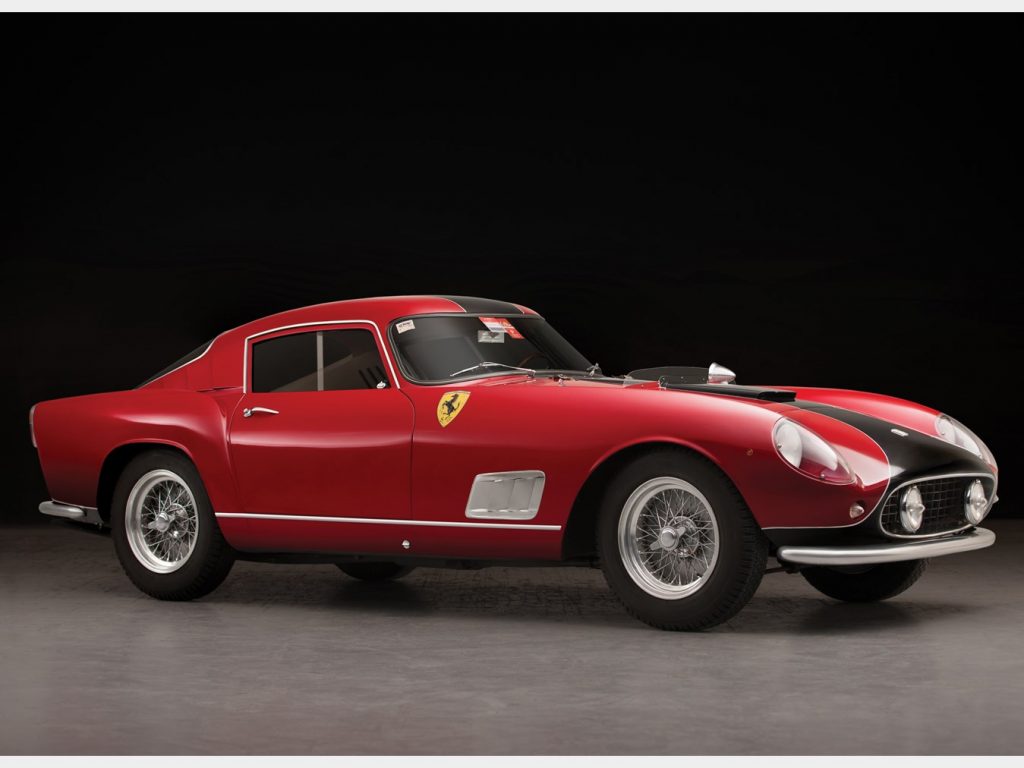 Perhaps no other competition sports car of the 1950s looms larger than Ferrari’s 250 GT berlinetta, which so dominated the multi-stage Tour de France rally from 1956 to 1959 that the model was nicknamed for the event. Produced in four discreet series before being succeeded by the 250 GT short-wheelbase berlinetta, the ‘Tour de France’ was built in a modest quantity of 72 examples that are prized by collectors today for their exquisite lightweight coachwork, advanced racing mechanicals and undeniable significance in Ferrari racing history.
This mid-production TdF is the 15th of 17 examples built in the 1957 body style, featuring three louvers and covered headlights. With production beginning at the end of 1957, the engine was equipped with competition camshafts tipo 130 and high-compression pistons. On 2 January 1958, the engine was completed and was dyno tested on the 4th of January. Signed off after first testing, the engine had a confirmed output of 258.2 bhp at 7.200 rpm. The transmission was the competition ribbed gearbox, paired with a limited-slip differential and an 8 × 32 final drive ratio. The body was fitted with sliding windows, and a third windshield wiper was mounted, later replaced by a Perspex hood deflector, and finished in dark red paint with a beige leather interior.
The 250 GT was immediately sold to Wolfgang Seidel, a German racing driver nicknamed ‘The Golden Bear’ who campaigned a 250 TR for the Scuderia Ferrari during 1958 (often with the better-known Wolfgang von Trips). Seidel had previously raced a variety of cars, including a Porsche 550 Spyder and Mercedes-Benz 300 SL Gullwing. No stranger to Ferraris prior to his acquisition of 0879 GT, Seidel owned an earlier, 14-louver 250 GT TdF, chassis 0607 GT, which he had raced with von Trips. However, the German duo bore slightly different driving styles and while Seidel was known for being safe, reliable and restrained, von Trips was notably more aggressive, and crashed that TdF at the Nürburgring in May of 1957. However, as 0879 GT remained solely with Seidel, it would not see this fate and emerged unscathed throughout its racing career.
Seidel entered the TdF in about 22 events over the next few years, claiming 11 victories along the way. Beginning with 2nd overall at the Pau 3-Hour race in April 1958, the 250 GT roared to class wins or outright victories at hill climbs, airfield races and secondary events such as the Grand Handicap de Spa-Francorchamps, the Gaisberg hill climb and the Eifelrennen at Nürburgring.
The car’s record in major events during this period was nearly as impressive, including 2nd overall at the Grand Prix of Spa-Francorchamps in May 1958, 4th overall at the 12 Hours of Reims in July 1958 (while co-driven by von Trips), 3rd in class at the Grand Prix de Paris at Linas-Montlhery in May 1959, 5th overall at the Gran Premio della Lotteria in Monza in June 1959 and 4th overall (and 1st in class) at the Coupe de Paris at Linas-Montlhery in September 1959.
In 1964, chassis 0879 GT passed through a short succession of German-based owners, first to architect Manfred Ramminger of Krefeld, and then a year later to a student in Cologne named Siegfried Mahnke. In 1966, Mahnke sold the Ferrari to Gary Schmidt, an American who taught at U.S. military bases in Germany, and he commissioned an engine rebuild in Switzerland with the support of the Ferrari Factory, as we can read in a letter of 1968, before selling the car in 1973 to Christer Mellin, a Swedish marque enthusiast and founder of the Ferrari Club Svezia.
Mellin was also in close contact with the factory and started to restore the car in 1974, sourcing parts at the factory, travelling dozens of times to Maranello, as we can see in all the invoices on file. It took close to 20 years for Mellin to complete the restoration, as he commissioned a meticulous refurbishment by some of Sweden’s finest craftsmen that stressed originality, taking hundreds of pictures to keep along with all invoices a rare mandate for a restoration of the mid-1990s. He also involved noted Modena and Maranello-based restorers such as Brandoli, Diena and Toni. Retaining as much of the original coachwork, hardware and mechanical components as possible, as well as the original upholstery, the refurbishment was capped with a bare-metal finish in amarante with a proper black hood stripe (matching one Seidel applied in 1959). The completed car was soon tested by writer Marc Sonnery for a feature in the April/May 1997 issue of Cavallino magazine.
In May 1997, Mellin sold the Tour de France to the current owner, who has dutifully maintained the fabulous restoration while entering the car in a number of niche events, including Ferrari’s 50th, 60th and 70th anniversary celebrations in Rome and Maranello, the Ferrari Shell Historic Challenges in 1998 and 2000, the Tutte le Ferrari in 1999 and 2000 and the Mille Miglia Storica in 1999. It should also be noted that chassis 0879 GT has recently been authenticated by Ferrari Classiche, confirming the presence of the original V-12 engine, as well as the matching-numbers gearbox and rear axle, giving it the distinction of being one of the relatively few surviving 1950s Ferrari race cars that remains today as ‘fully matching’ throughout.
With a colourful history including a successful career with a celebrated German driver, 0879 GT claims a short and well-documented chain of ownership, including period use by a Ferrari factory driver. The berlinetta is one of only 17 examples built with the beautiful three-louver Scaglietti coachwork and has enjoyed the fastidious care of just two custodians over the last 45 years, offering marque enthusiasts a particularly pure and impressive example of a Ferrari competition legend.