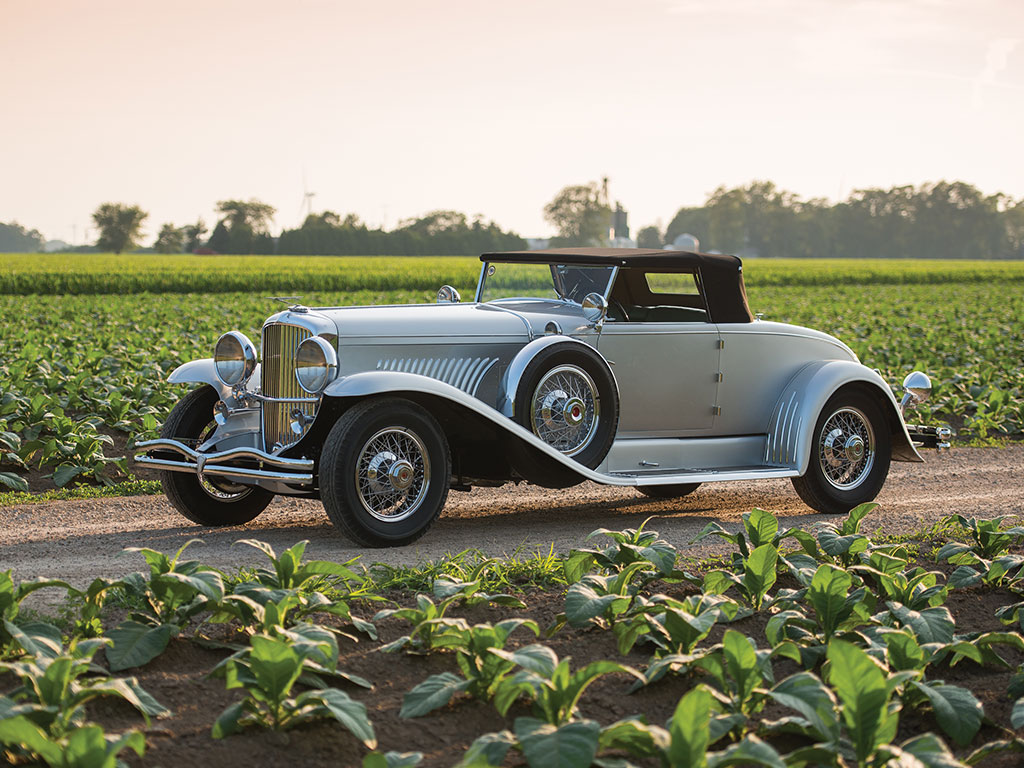 Duesenberg Model J number J-147 was originally delivered on 29 July 1929, to H. Leslie Atlass, a prominent pioneer of radio and television broadcasting in Chicago, carrying a “sweep panel” dual-cowl phaeton by LeBaron. Not long thereafter, Mr. Atlass met his friend, Philip K. Wrigley, heir to the chewing gum fortune and owner of the Chicago Cubs. Mr. Wrigley was himself the owner of a new Model J, Murphy convertible coupe J-121. The two men came to prefer the bodies of one another’s automobiles and arranged to trade the coachwork between their two cars. Thus, Mr. Atlass’ J-147 was finally crowned with the handsome Murphy convertible coupe, which it retains to this day.

The car was subsequently acquired by Bill Veeck Jr., another American baseball legend, known as “Sport Shirt Bill.” Owner at various times of the Cleveland Indians, St. Louis Browns, and Chicago White Sox, he contributed widely to the sport during a long career, and is well-remembered by fans and historians alike. He enjoyed his Duesenberg until the start of World War II, at which point it was traded on a more fuel-efficient Mercury. Subsequently, frost damage to the engine was repaired by Chicago specialist John Troka with the block and crankshaft of J-245; that car’s firewall, 2253, was also installed at the same time.

Next, the Duesenberg passed in 1950 to Dave Farr, an early Duesenberg enthusiast in Hinsdale, Illinois, who would maintain it for 13 years. Later long-term owners included Jack Siler of Ohio, Motor Trend co-founder and longtime “Classic Comments” columnist Robert Gottlieb, and the Imperial Palace of Las Vegas.

Robert Perry of Birmingham, Alabama, acquired the car in 2007, and submitted it to Al Prueitt & Sons of Glen Rock, Pennsylvania, which completed a full restoration, with the result being an appearance at the Pebble Beach Concours d’Elegance, in 2009, and an Amelia Award at the Amelia Island Concours d’Elegance in 2011. Later, the car received further authenticity and mechanical improvements at the hands of noted marque specialist Brian Joseph of Classic & Exotic Service.

In this form, the Model J has been much-enjoyed by its current owner, and in 2016 was driven reliably on the Duesenberg Tour in Northern Michigan, covering thousands of miles with power and comfort. The Duesenberg is also recognized by the Auburn Cord Duesenberg Club as a Category One Certified car, having been inspected and certified by the Club no fewer than three times over the years.