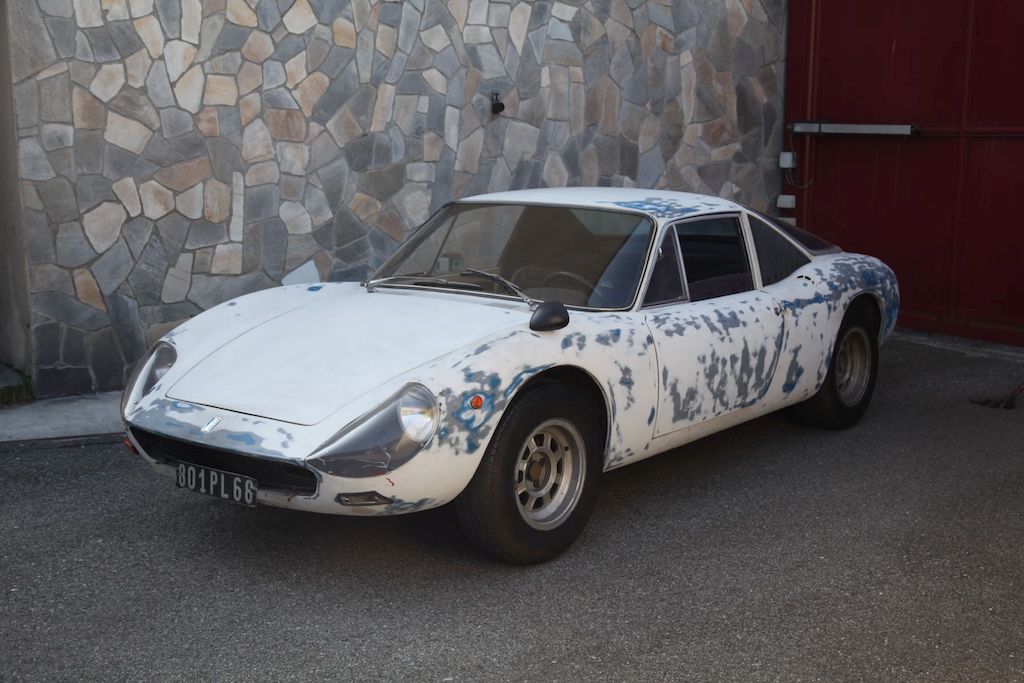 The Vallelunga prototype was styled and constructed by Carrozzeria Fissore, an alloy-bodied spider and a pair of closed coupes having been completed in 1963/64. The Vallelunga was assembled around a backbone chassis frame and was powered by a 1.5-litre Ford Kent 4-cylinder engine which performed double-duty as a stressed chassis member, a practice becoming accepted in competition car construction of the time but rare within road cars. De Tomaso’s long racing experience was also reflected in the design of the Vallelungas running gear, which comprised all-independent suspension by wishbones and coil springs, rack-and-pinion steering and four-wheel disc brakes. The production Vallelunga featured striking glass-fibre coupe bodywork styled by Giorgetto Giugiaro with more than a hint of Ferrari 250LM and Dino 206 combined. Compared with the Fissore-styled cars, there were numerous detail differences, the most obvious concerning access to the engine bay, which was via a glass hatch rather than the hinged clamshell-type rear body section of the prototypes.
Although just a humble pushrod power unit, the Ford Kent engine was both robust and immensely tunable, and when installed in the Vallelunga it was fitted with Weber carburettors. Power was transmitted via a Hewland transaxle. Approximately 50 production Vallelungas were made during 1965-66 before De Tomaso moved on to manufacture the Mangusta. About three factory race cars were produced and possibly three aluminium skinned cars left de Tomaso.

The car on offer was sold to its first owner in 1966, probably in France. It then passed to its second owner in 1971 in the Haut-Rhin area (Alsace) where it remained in the same ownership until recently, when the owner passed away. At that moment, the car was in the process of being re-painted and some of the paint had been stripped when the work stopped. Apart from this, the car is untouched from new and has probably not seen much use since the 70s. The current owner has told us that the car is running but will need fully re-commissioning before it can be put to into proper use again.