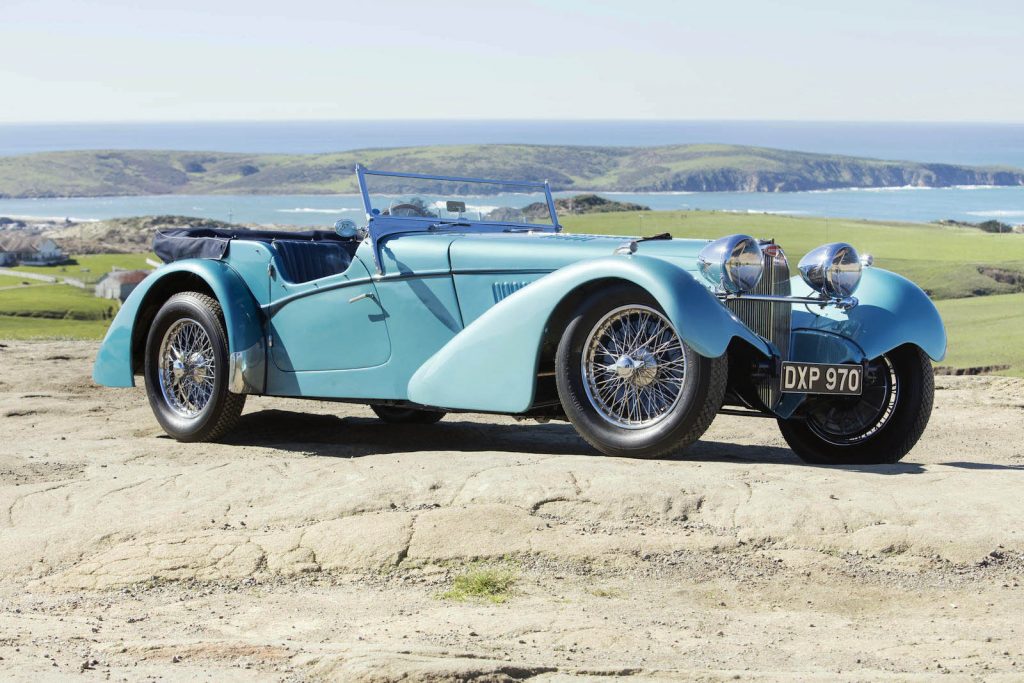 The history of 57541 described here relies on the work of Bugatti expert Pierre-Yves Laugier, as well as on that of Bernhard Simon and Julius Kruta. All three have published chassis-by-chassis accounts of the Type 57S, which have been used.

George Rand, who had recently been appointed Bugatti agent in New York, ordered 57541 via Colonel Sorel, the London agent on Brixton Road. The chassis was sent to Vanden Plas and given a four-seat touring-roadster body no. 3595. Painted gray with red accents, the cost of this exquisite bolide was £ 275. Bodied in the classic minimalistic British style with sporting cut-down doors, 57541 resembles the Vanden Plas 4 1/4-liter Bentley Tourer body no. 3340 delivered to Malcolm Campbell in April 1936, as well as the 4.3-liter short chassis Alvis body no. 3588 built in 1937. Historically and stylistically, these three bodies can trace their lineage directly back to the great Vanden Plas-bodied W.O. Bentleys from the late 1920s. Colonel Sorel must have been justifiably happy with the result, as 57541 was pictured in the company’s 1937-1938 catalog.

George Rand had 57541 shipped to New York where it is likely that it was used in the A.R.C.A. races on September 25, 1937. Period images exist of the car taken at the Roosevelt Raceway race in New York without the fender skirts it was fitted with initially. Rand was unable to find a buyer for the car, and it was shipped back to England and shown on the Bugatti stand at the London Motor Show held at the Olympia from October 13 to 22, 1938. On November 3, 1938, it was registered with the number FGW 384. The first English owner remains unknown. It is likely that 57541 remained in England, but according to Pierre-Yves Laugier, it is possible that by the end of 1938, 57541 was in the ownership of Herman H. Harjes, Jr., director of the Harjes and Morgan Bank on the Place Vendôme in Paris.

57541 vanished from sight during the hostilities, but towards the end of the war, it appeared for sale at the Continental Cars garage which was owned by Rodney Clarke, and it is likely that it was given registration number DXP 970 in 1947. That same year, the car had no less than three owners, namely Rodney Clarke, Brian Finglass, and Sir Alfred McAlpine, all of whom were managers of Continental Cars. Using Jack Bartlett as intermediary, they sold 57541 to Jack Robinson, who exported it to Trinidad, where it was registered as PB 371. According to Pierre-Yves Laugier, Robinson stated in a 1952 issue of Bugantics that when he bought the car through Bartlett, it was equipped with a Type 35B 3-blade racing supercharger. Robinson also noted that major work had been done to the car including fitting a new crankshaft, crankcase, cylinder block, pistons and connecting rods. In 1952, the car was completely overhauled, but its original gray color was kept. As Laugier succinctly states, “After its restoration, Robinson made the XK120 Jaguars pay dearly at the Trinidad Aerodrome, where he reached speeds of more than 180 km/h.”

Robinson kept 57541 for more than thirty years and sold it to Peter Agg in 1985, with Leonard Potter possibly acting as middle man. Via his Trojan company, Agg undertook a complete restoration of the car. The engine was given to Crosthwaite and Gardner, who replaced the 35B supercharger with a correct Type 57, thereby bringing 57541 up to factory correct 57SC specification. Hydraulic brakes were fitted and the car was repainted in the light metallic blue color that it wears today. Agg took great joy in using 57541, and he was regularly seen participating at the Prescott hill climbs and various circuits. In 1995, the car was sold to its present owner, who has retained it for the past 20 years.

Remarkably, 57541 has a virtually unbroken chain of protective owners who have taken extremely good care of this automotive jewel since it left the factory. Factor in the unbeatable combination of its unique coach built body and genuine 1930s supercar underpinnings, and the result is truly a heady cocktail. The Bugatti Type 57S embodies the highest standards in road holding, engineering refinement and maximum performance in a prewar car. It also displays a sheer mechanical elegance is the very pinnacle of mid-1930s aesthetic finesse. One can lose oneself, just contemplating the gorgeous engine compartment. The Type 57S ticks every box – it is in many ways the ultimate pre-war supercar, and in SC form, certainly faster than virtually anything else on the road at the time. The production run of the 57S was brief as manufacturing costs were high, and a devastating war intervened. Rarest of the rare, 57541 represents a unique opportunity for an enlightened collector to acquire one of the greatest classic cars in the world.

The full production and current ownership record is summarized by Bernhard Simon and Julius Kruta in their reference work on the model. The list represents a stunning statement of the importance and exceptional esteem that collectors have held these cars in almost from new. When such things were still possible the Schlumpf brothers cleverly snapped up no fewer than 9 of them, precluding 20% of the production from changing hands again. Trend setting collector Ralph Lauren is one who can count 2 in his definitive stable, the majestic Atlantic Coupe as well as a convertible for example. As one analyzes this list today the potential to secure one, let alone an open car becomes so much more daunting, given that so many are now in long term ownerships or Institutional collections. A measure of this might well be the fact that it is 17 years ago since a convertible was offered publicly.