The extremely handsome, one off coachbuilt Bugatti presented here is accredited by Bugatti experts to be a collaboration of its original owner with the Swiss coachbuilder Graber who were one of the leading Swiss coachbuilders of their day. 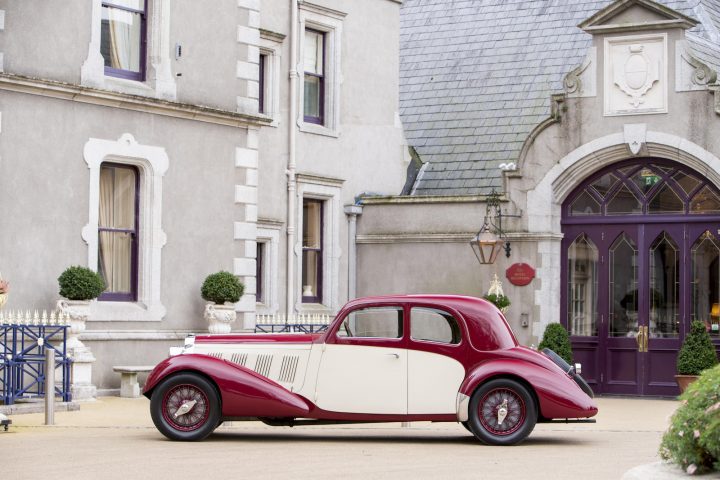 Most of Graber’s 50 workers were skilled specialists, and the firm regularly displayed their latest creations on their stand at the Geneva Salon. It could be said that they were less flashy than some of the French coachbuilders, less advanced than certain Italian efforts but they were definitely of higher quality than most and displaying the well-balanced design preferred by their wealthy clientele. The success of Hermann Graber’s company may be judged by the fact that it perpetuated comfortably into the 1970s, long after many of its pre-war contemporaries had ceased. 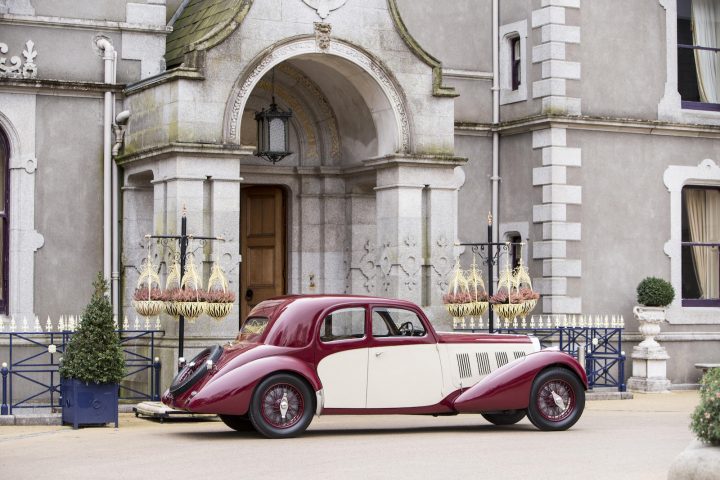 According to information supplied by Bugattiste Kees Jansen, 57443 was completed by the Bugatti Works in September 1936 and was sold in chassis form to the Bucar Bugatti agency, who had operations in both Berlin and Zurich. This particular order was for the Grob Agency in the Zurich Canton of Horgen. 57443 is one of a handful of Type 57s that were supplied at this time all with chassis numbers in close proximity of each other, notably, 57444, 57446 and 57447. 57443, 57444 and 57447 were all to be equipped with coachwork by Graber. Jansen’s records state that the rolling chassis was driven over 150km to Hermann Graber’s coachbuilding works on September 21, 1936. 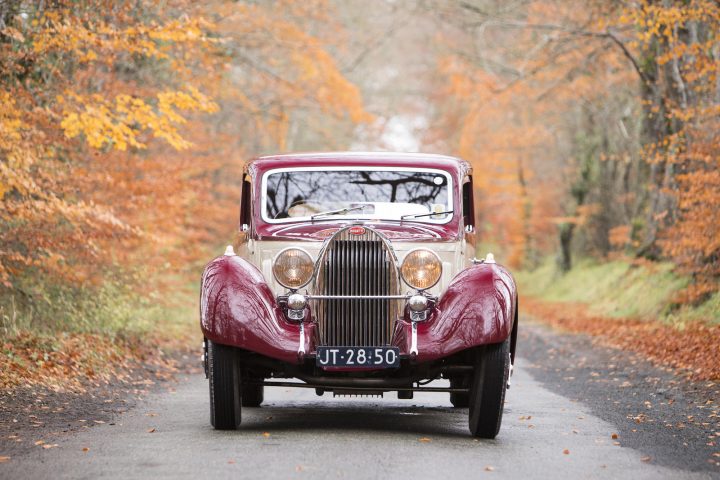 The car’s original owner is said to have been an architect and was therefore responsible for the design, while the coachbuilder was for its construction. A number of its features including the hood louver treatment are common with other Graber bodies.

The result was a dramatically different automobile to the factory offered Pillarless sedan, which was arguably a victim of practicality over style. The car here is a clever, set-back, close-coupled design retaining the popular scalloped side panels synonymous with Bugattis, and dispensing with running boards to accentuate separate ‘teardrop’ or pontoon fenders. It is unquestionably a success, and it is perhaps only at second glance that one notices the presence of the secondary door. With the spare tire set at the back of the car, the full design of its side from its quarter-batched hood louvers backward is uncompromised, always a sporting styling touch. Another particular feature which is rather interesting are the long ‘eared’ wheel hub spinners, which it is said were to make wheel removal easier for a lady owner early in its career. 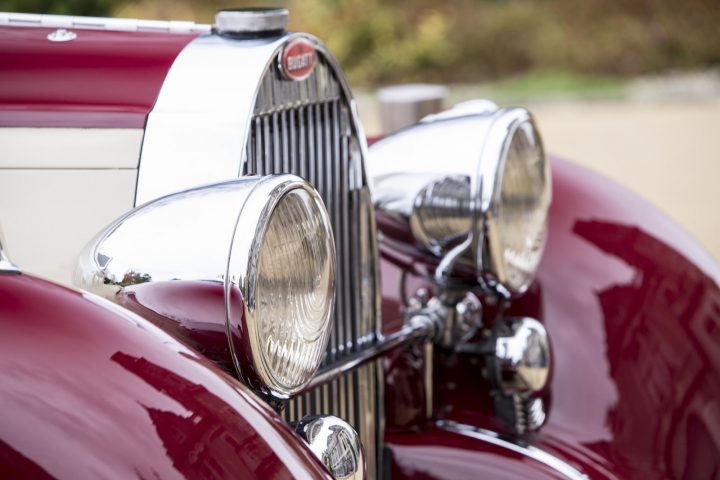 By 1960, the Type 57 was the property of Dieter Marx of Basel, and it was there that it was spotted by well known Dutch Bugatti dealer Bart Loyens, using one of the many connections he had forged as a student in Switzerland. The car had apparently been laid up following an engine failure, allowing Loyens to acquire it for a relatively favorable SWF500. He would bring it to the Netherlands and it would remain in Dutch ownership for the next 48 years. 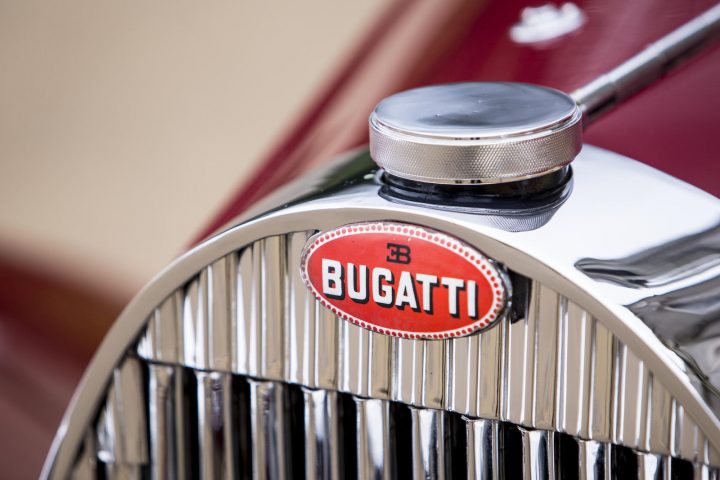 Arriving in Holland 57443 was stored in warehouse space he used of the America-Holland Shipping Line, but it was not long before it passed onto the Dutch Bugatti Agent Albatros, owned by the van Ramhorst brothers. At this point, the ‘broken’ engine was replaced by another correct contemporary Type 57 unit, being over-stamped with the car’s chassis number. (Today its original engine is also in America having been fitted to Jim Hull’s remarkable recreation of the ‘Torpedo Competition’ completed and debuted in the last few years.) 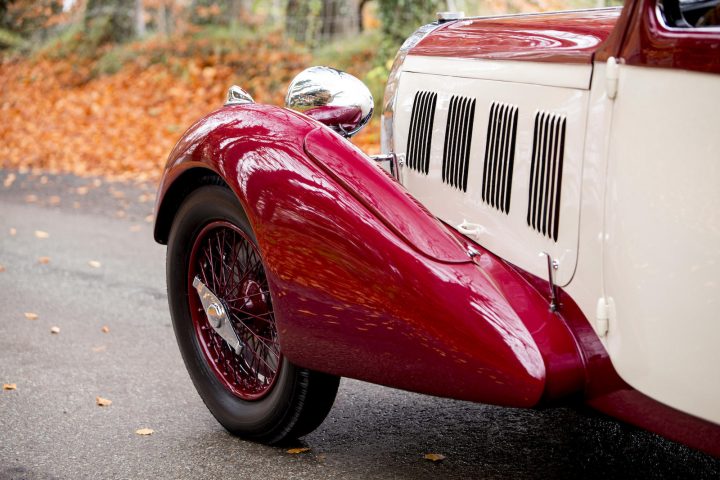 After brief sojourn out of the country, while in the custody of Dutchman Gies Pluim came to an end when his wife decided that they didn’t need more than one Bugatti (already owning #43198) the car then passed to Hans Sauerbrier in November 1962 where it would remain until 2008. In Sauerbrier’s custody the Bugatti was well maintained, and received an engine rebuild with new block in the 1980s, with the work being carried out by Fa Keizer of Doetinchem. Perhaps also at this time it was upgraded to have the hydraulic brake system as on the later models. With that addition and while retaining correct rubber engine dampers of its series, it is today to the definitive specification of the Type 57. 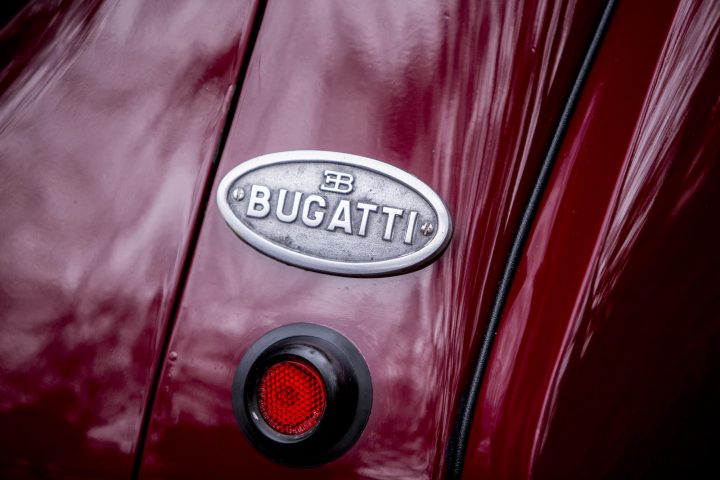 After more than 4 decades of ownership in this family the Bugatti migrated to the U.K. being sold publicly. Its buyer subsequently refurbished the car mechanically before passing it to the current owner. In its present custody, the decision was made to repaint the car in a style more in keeping with others of its brethren accenting the body moldings in a two tone scheme. At the same time, the interior was sympathetically attended to, repairing the original leather. The details of the cabin are particularly attractive and extend to aspects such as the rarely seen accessory of the original leather cover for the steering column. On close inspection, this is a rewarding Bugatti to look at today, its distinct body styling is particularly appealing and the preservation of its interior has ensured that the soul and charm of the car can still be experienced. 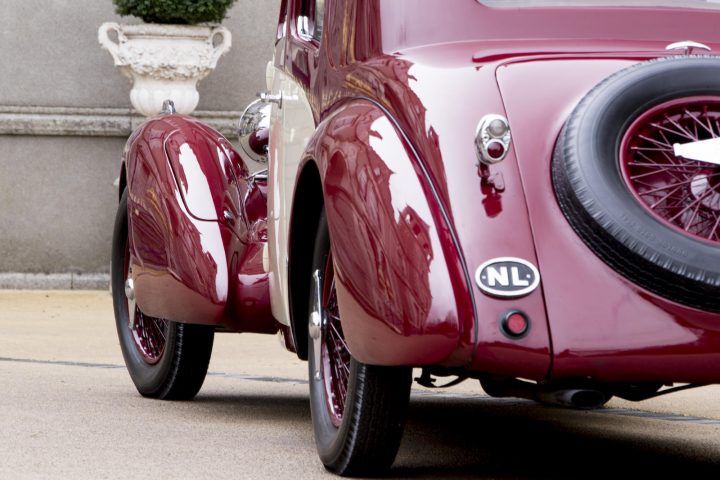 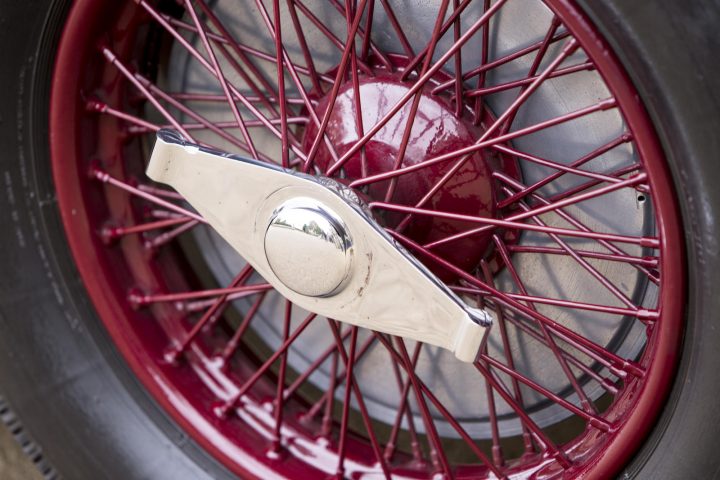 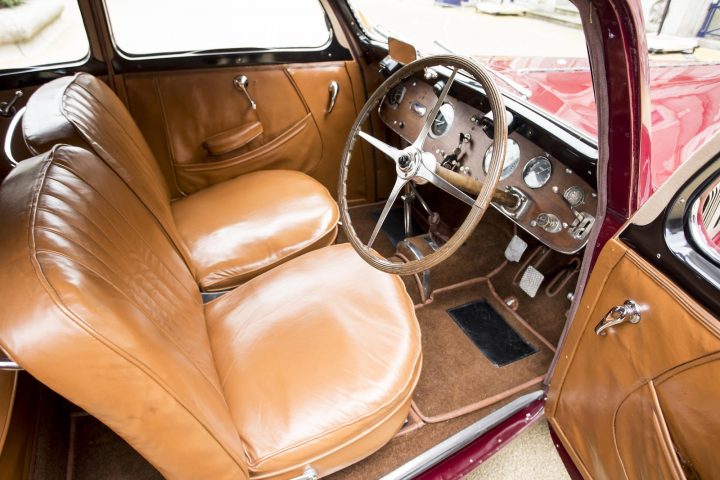 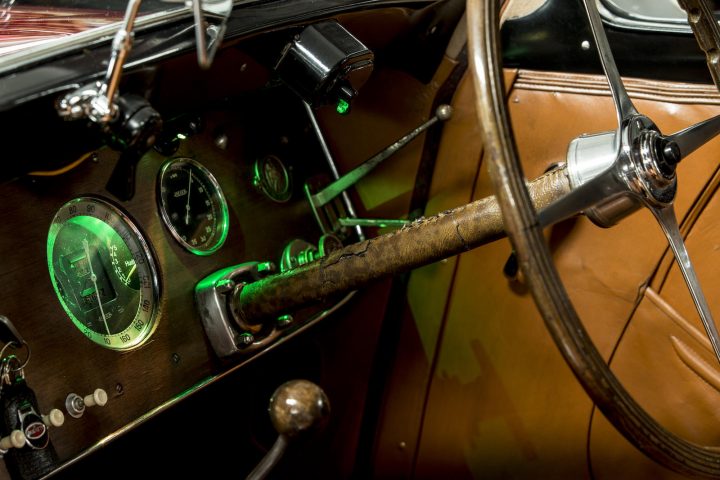 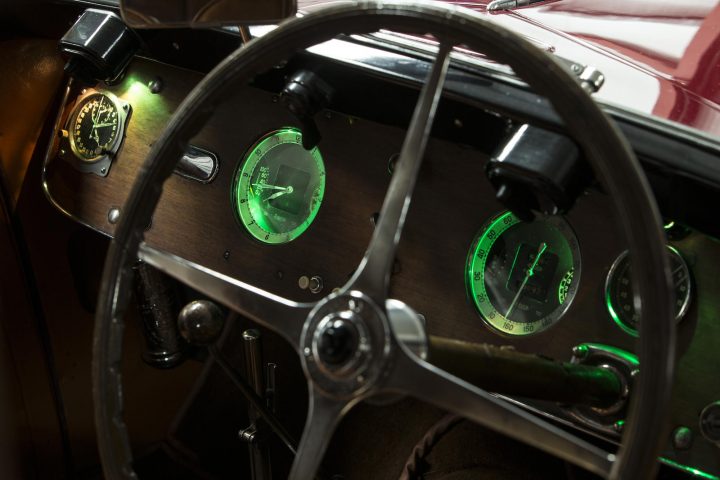 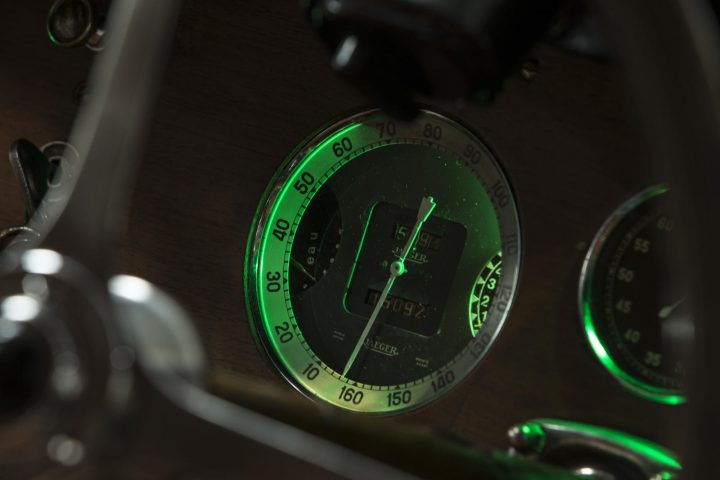 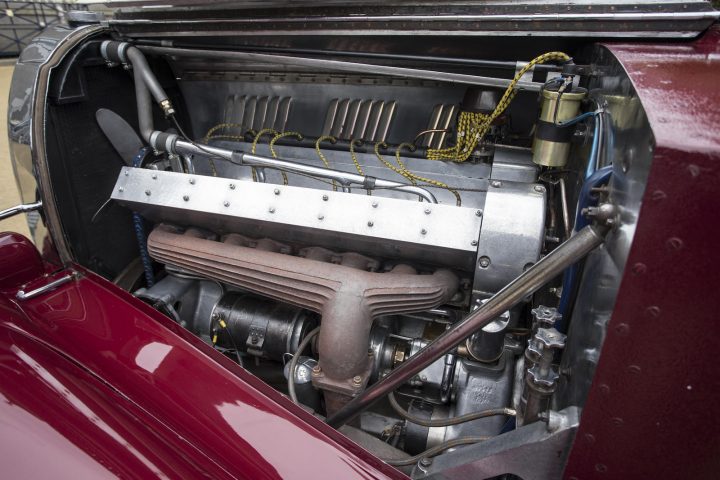 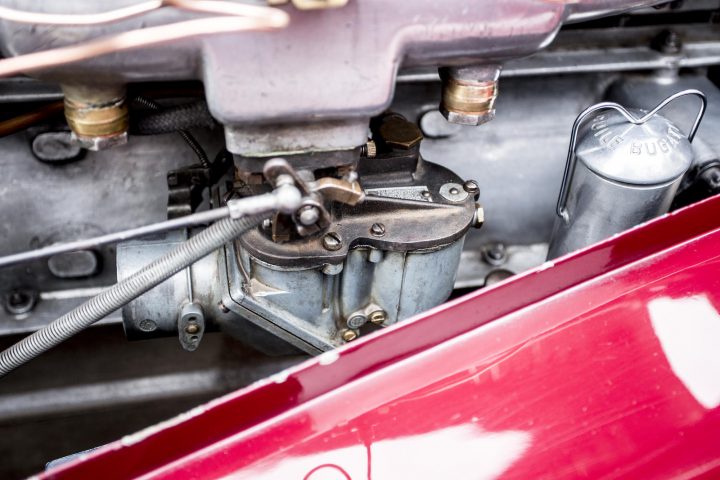 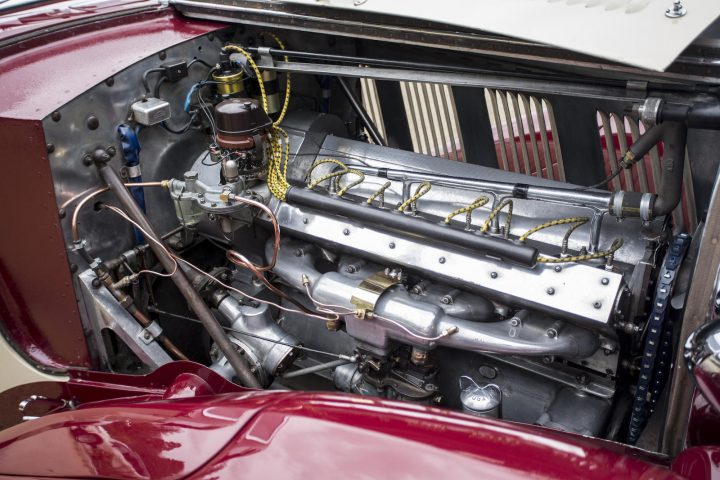 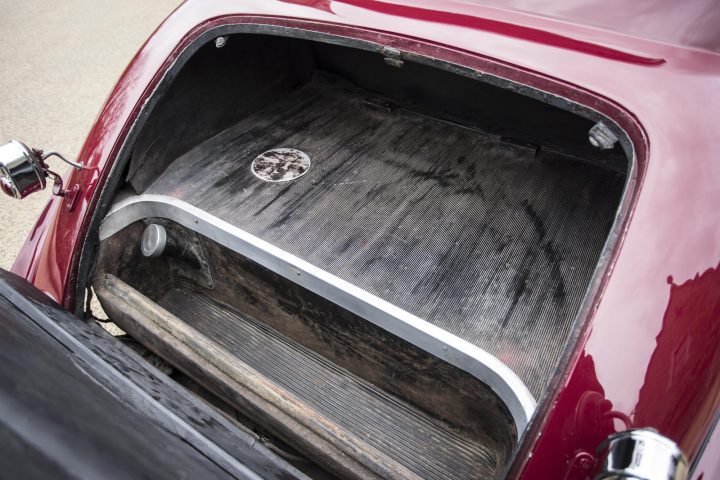