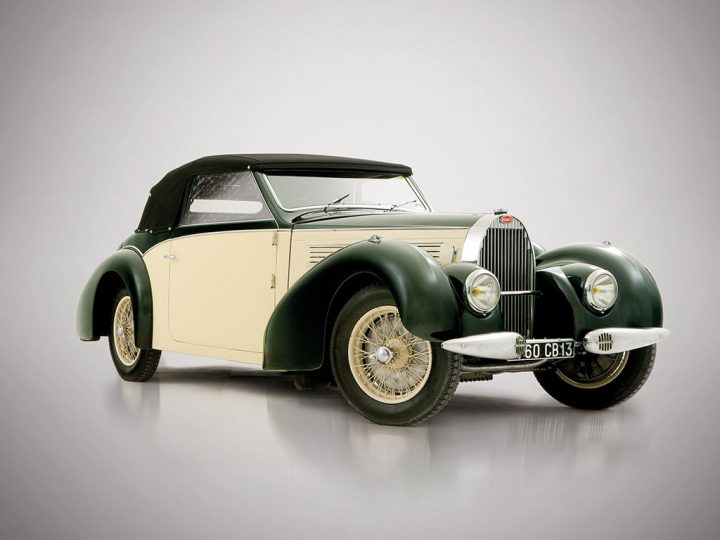 The annals of automotive history are filled with characters whose life stories are more fascinating than the best of fiction. Certainly among these is the existence of Jean-Pierre Wimille. Born into a family steeped in the scent of Castrol and hot metal, Wimille was the son of the motoring writer for Le Petit Parisien. He made his entry into Grand Prix racing at the wheel of a Bugatti Type 37A in 1930, and he never looked back. For the remainder of the decade, he was a frequent sight at the world’s most important races, and in most of these, he drove a Bugatti.

Yet, Wimille’s close connection with the Bugatti factory—and his racing successes—were the least interesting parts of his story. He was a genuine war hero, risking his life for the French Resistance during World War II. He would have undoubtedly gone on to even greater successes in the world of motorsport were it not for an unfortunate end behind the wheel of a Simca-Gordini in 1947. 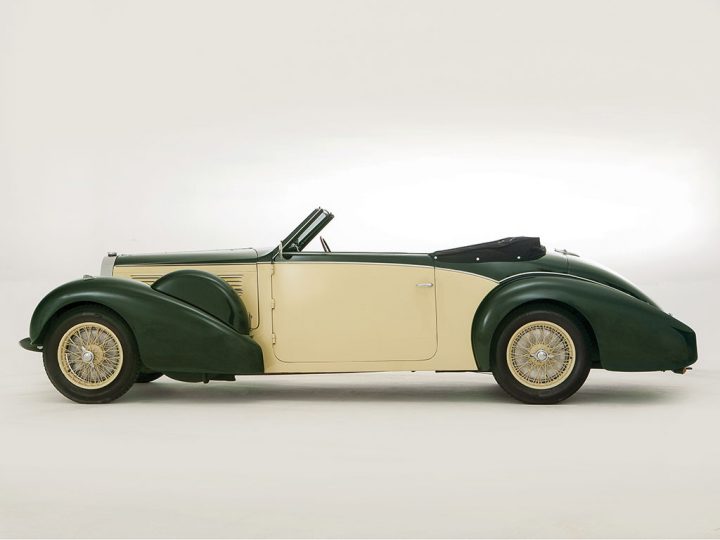 This Type 57, chassis 57731, was one of 11 late-production chassis produced in the autumn of 1938 as 1939 models. By the time this chassis was built, Bugatti was focusing the energy of its factory on strong-selling, practical body styles such as the Galibier saloon, and it was increasingly outsourcing production of the more specialized bodies to their favoured coachbuilder, Gangloff of Colmar. 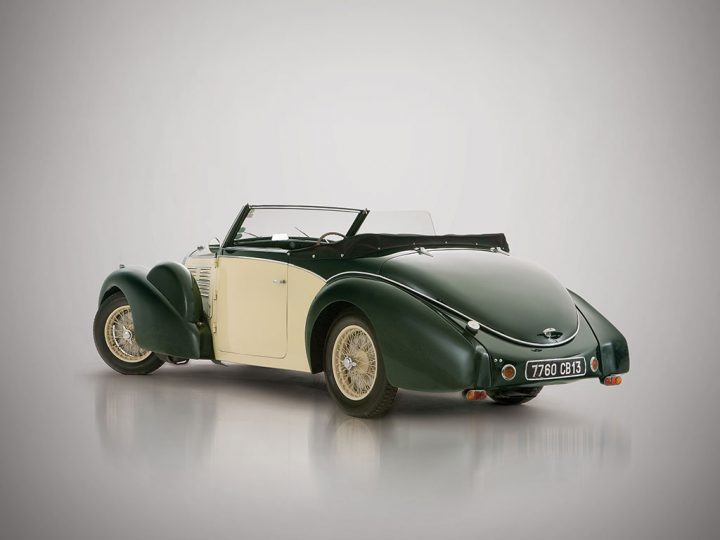 The four-passenger cabriolet body built for this car was drawn by Lucien Schlatter and built by Gangloff as a “special cabriolet”. In much of its specifications, the car was similar to the limited-production Stelvio design but incorporated several detail differences in its lines. Most Stelvios built in this period were made by Gangloff employee Schmitt, but this one was made by Zubern, further indicating its unique “one-off” status. Features such as the sharply raked windshield, single side-mounted spare, and the treatment of the rear deck were unusual; the car also incorporated desirable styling touches common to the late Type 57s, including front “bumperettes” and low headlamps blended into the front fenders. 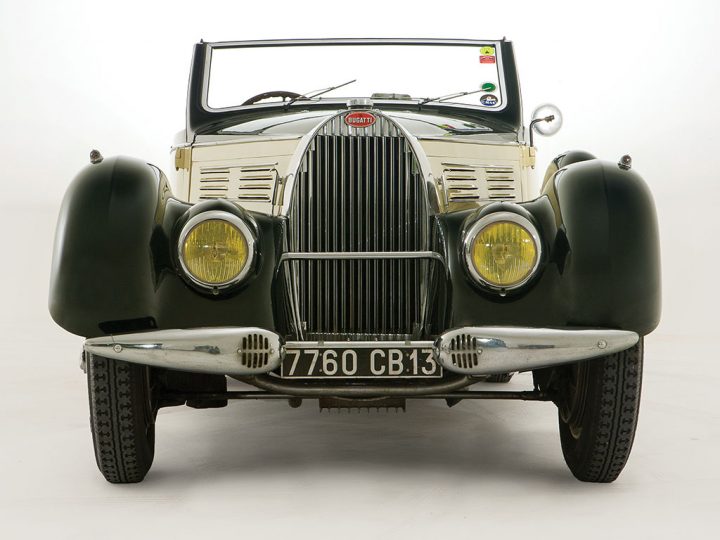 Following its completion in October 1938, the Bugatti was dispatched to the 16th Salon International de l’Automobile in Geneva, Switzerland, in early 1939, where it was displayed on the factory stand. It was subsequently utilized as a factory demonstrator and made available to Jean-Pierre Wimille, wearing factory registration plates 5265-NV2. Given his favoured status with the factory as one of its finest and most active drivers, Wimille often had the latest and best Bugatti at his disposal; chassis number 57731 was one of these. 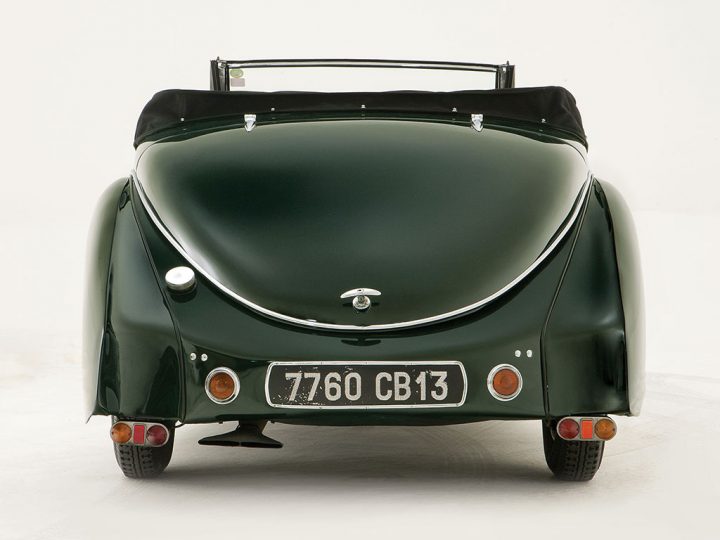 Early post-war history of the car is not recorded, though Bugatti historian Kees Jansen notes it was registered in Rouen, France, in 1950 as 710 F 76. It later made its way to the South of that country, and in 1963, it was purchased there by well-known Bugatti trader Paul Sac, a contemporary and colleague of the famed Jean de Dobbeleer. At the time, the car was finished in black and yellow and registered as 7760 CB 13. Sac subsequently sold the car to the Quattroruote Collection in 1964, and it has remained a centrepiece of the Collection ever since—a remarkable period of over 50 years in single ownership, virtually unparalleled among Bugattis of this era. 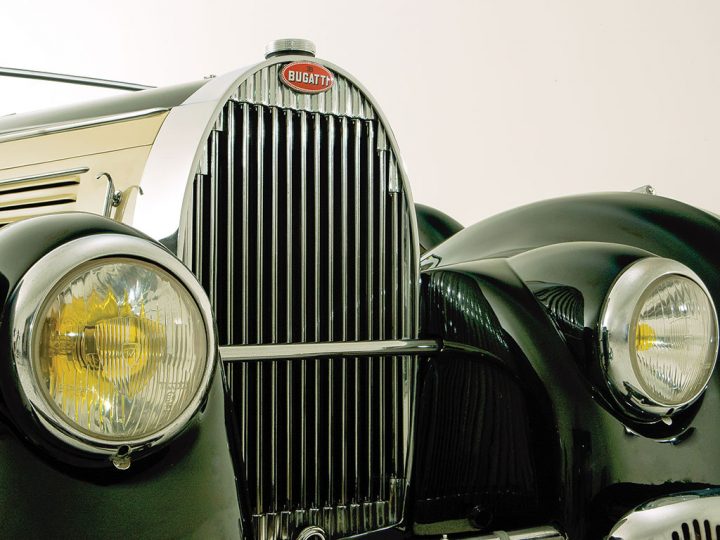 Currently finished in cream and black, the car remains a very authentic older restoration and in very presentable cosmetic and mechanical condition throughout. In inspection, the engine number stampings are noted as being correct factory stampings, and the car can be confirmed to have its original engine, with which it was delivered in 1939. Similarly, the “57” of the chassis number on the engine and chassis plate are original, but the “731” on the plate is a later stamping, likely (according to Jansen) made very early in the life of the car. 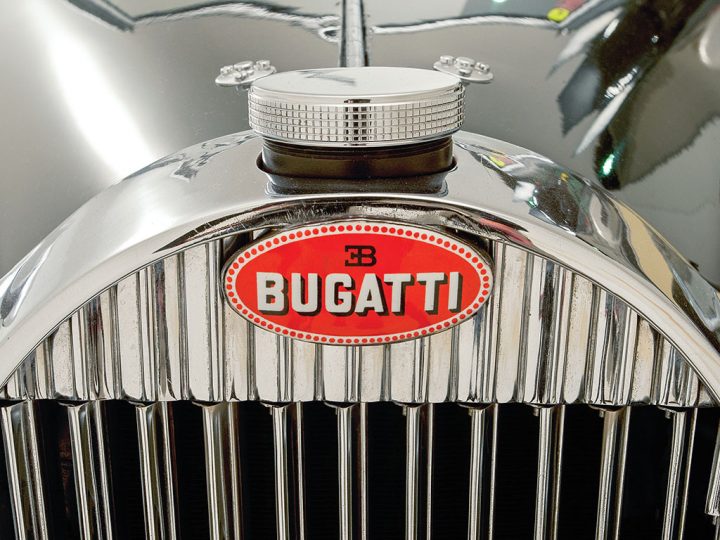 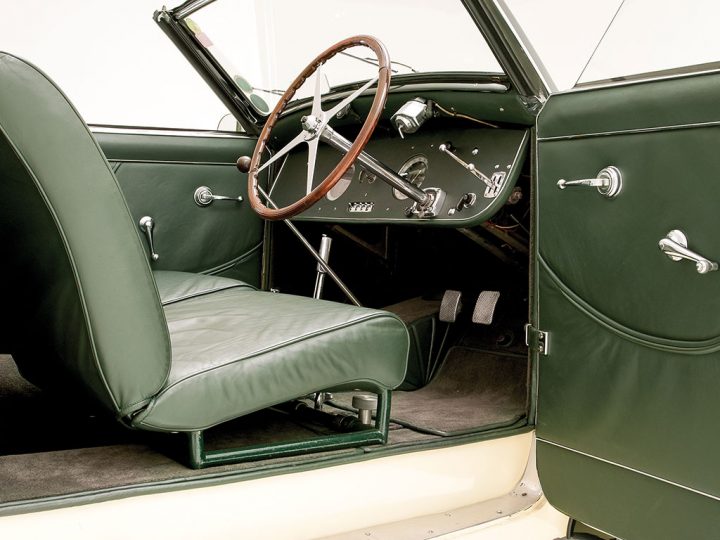 A Bugatti of exceptional provenance and quality, this is one of the few products of the company to have been both a significant show car and the steed of a legendary driver. It is one of the most historically significant Type 57s offered in recent memory. 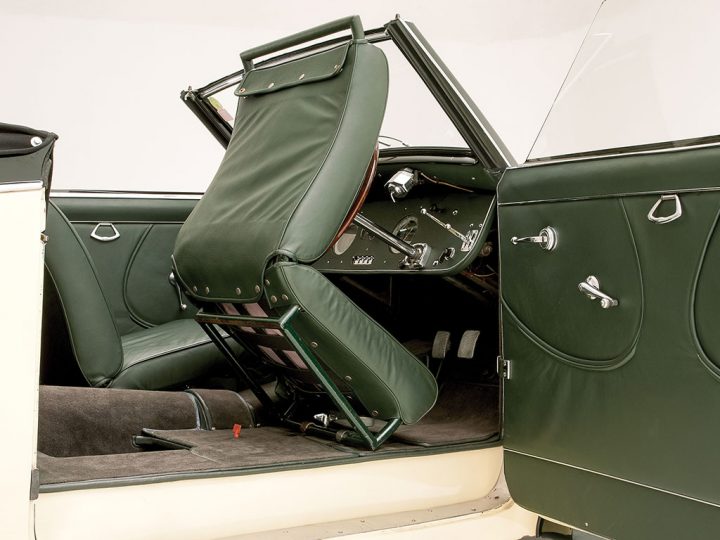 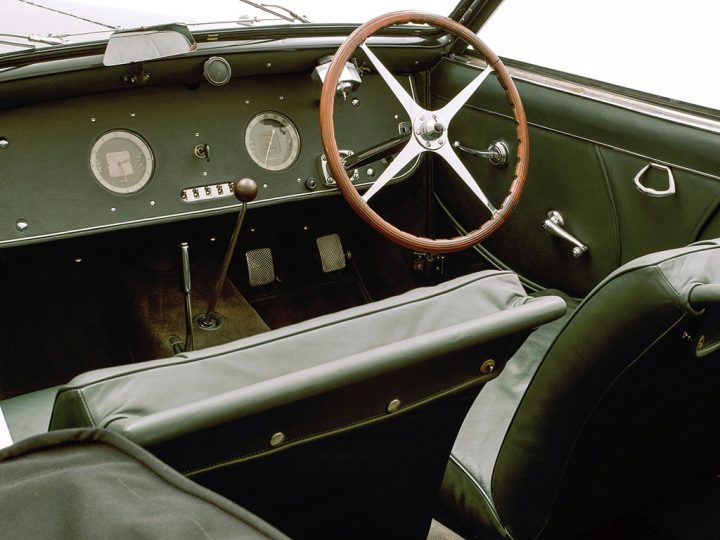 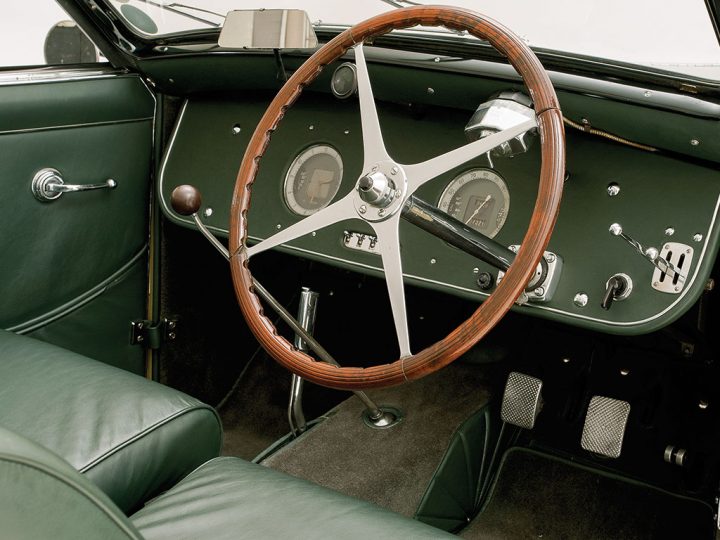 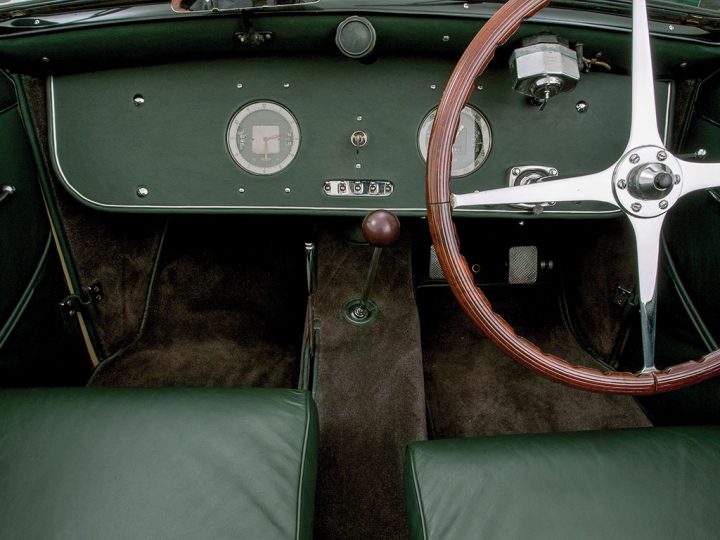 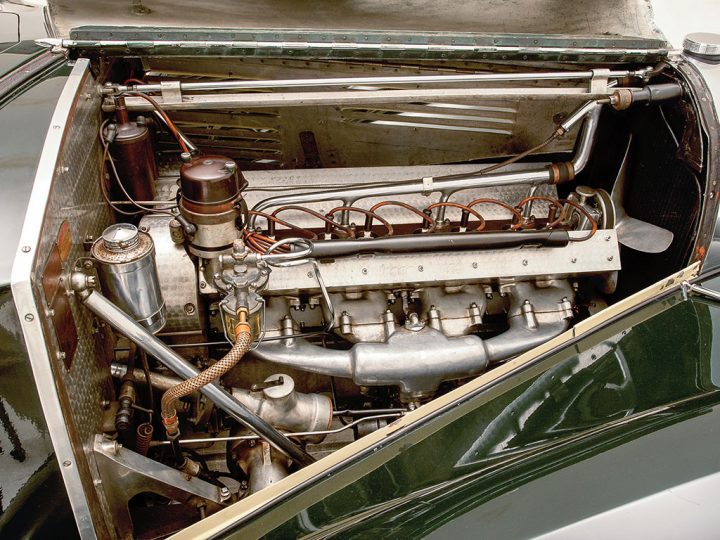 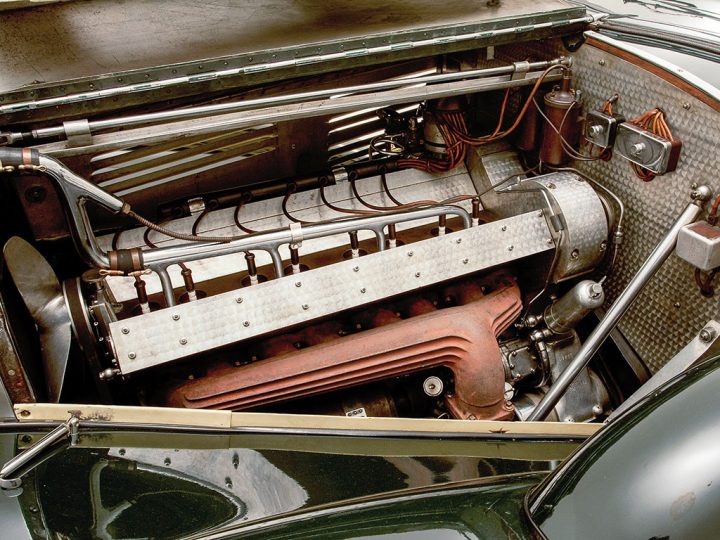