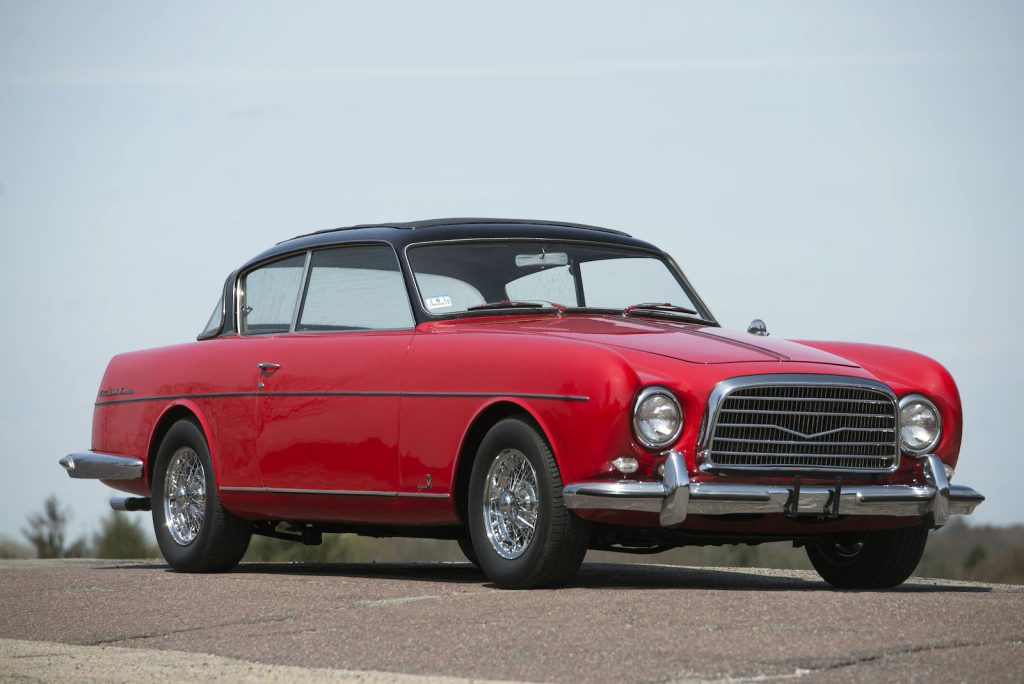 Bill Frick was considered an automotive genius of the 50s and 60s. He created a name for himself engine-swapping in the early 1930s, but his career really took flight once he entered the world of racing. Frick found himself fielding a long list of requests from amateur drivers, to modify and prep their cars. Frick’s outstanding reputation led him to NASCAR. After a very successful racing partnership with renowned driver Phil Walters (also known as Ted Tappet,) the two opened their own shop on Sunrise Highway in Rockville Centre, New York, known as Frick-Tappet Motors. 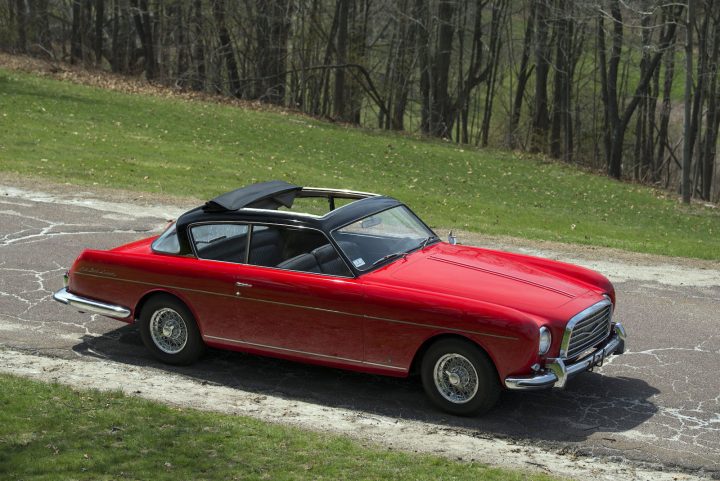 Around the same time that Frick opened his shop, Cadillac introduced their new V8 engine. Frick quickly saw the potential in the engine, as it was the first short-stroke, overhead valve, high compression production V8. The new powerplant had 331ci and a compression ratio of 7.5 to 1, which generated a powerful 160hp in stock configuration. Despite the powerful new engine, the Cadillac’s excessive weight kept it from being a performer; Frick sought to change this by swapping the engine into the much lighter 1949 Ford, creating the first “Fordillac”. Briggs Cunningham was one of the first and lucky few to attain a Fordillac – he had become intrigued with the vehicle after witnessing one of its impressive performances at an SCCA hill climb event in Connecticut, and had to have one. Cunningham became a regular at Frick-Tappet Motors and would hire Frick to work on his cars in preparation for the upcoming 24-hour race at Le Mans. Cunningham was so impressed with the work and performance results, he purchased Frick-Tappet Motors, moving the business to Florida where he would set out to win Le Mans and other prestigious races in one of their creations. The Frick prepared cars performed extremely well; after the team produced impressive back-to-back 1-2 finishes at both Elkhart Lake and Watkins Glen, Bill Frick received the first ever “Sports Car Mechanic of the Year” award. 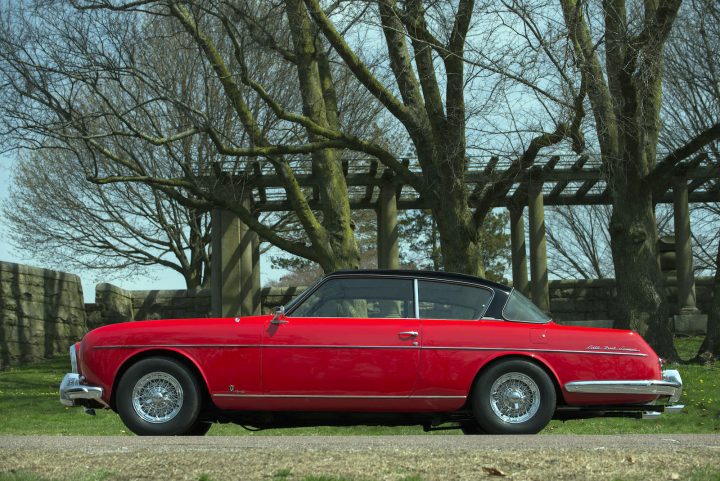 Frick only stayed in Florida a short time before returning to New York to open Bill Frick Motors, where he began to work on his next creation – The Studillac. Frick was enamored with the 1953 Studebaker design, but very unimpressed with its 120hp engine. By 1953 Cadillac’s engine was producing 210hp in stock configuration. Applying his tried and true formula, Bill went ahead and began modifying the Studebaker to accept the Cadillac engine – creating the Studillac. The Studillac consisted of much more than just an engine swap; Frick would modify the steering box, floorboard tunnel, transmission cross member, driveshaft, brakes, and the electrical system. The Studillac would reach estimated speeds in the mid 100s, and do 0-60 in 7 seconds, making it one of the fastest cars around. The Studillac was an instant hit. The shop was flooded with orders and began producing the performance sensation on a full time basis. The Studillac became an exclusive and sought after performance machine that was even featured in the James Bond novel, Diamonds are Forever, by Ian Fleming. 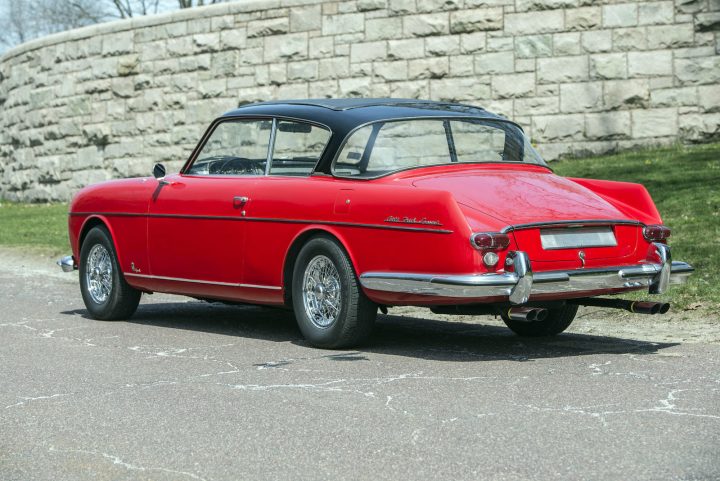 In 1955 Studebaker redesigned the Starlight coupe/Starliner hardtop – Frick stated “They changed the styling of the car, especially the nose. It was really ugly and nobody wanted one anymore”. As demand for the Studillac virtually disappeared with the arrival of the new Studebaker, Frick turned to the famed Italian coachbuilder, Vignale. Frick went ahead and took one of his famed Studillac chassis, and made additional improvements by adding crossmembers, better shock absorbers, higher rate springs, a stiffer anti-roll bar, and track bars. He then sent it off to Vignale, and what he got in return was The Bill Frick Special – a custom Vignale bodied, Michelotti designed masterpiece. In July 1955 the prototype was tested by Road & Track where it was called “America’s answer to Europe”. After a test drive on Sunrise Highway, the author of the article stated “he tooled away from the other stuff like it was anchored” and “turned a few corners like he was on rails”. The car was also featured on the cover of Sports Car Illustrated in May of 1956. 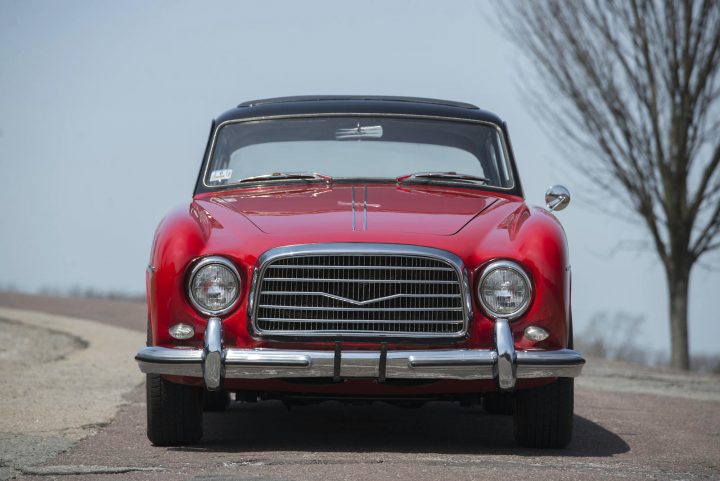 The $9,000 plus Special was ordered new by Mr. John Blodgett Jr., an extremely wealthy lumber baron from Grand Rapids Michigan. Mr. Blodgett wanted to enjoy open air motoring but preferred the looks and handling characteristics of a coupe, and thus so he ordered his special with a roll-back cloth roof. Photos of the car at the Vignale factory show that it was delivered in a beautiful medium blue metallic with a black painted top, sitting on large whitewalls. The interior was trimmed in grey Connolly leather with contrasting blue piping. Against Frick’s advice, Mr. Blodgett ordered the car with a French Pont-a-Mousson four speed transmission, but later the Frick recommended General Motors T-10 floor mounted four speed was installed. Blodgett would own the car into the mid 60s, at which point he gifted it to his secretary. She and her husband would own the special for a few years before selling it to its third owner in 1970, Mr. Emmett Boitz of Manmouth, Oregon. During his ownership, Mr. Boitz re-painted the car silver over the tired original blue paint. After 3 years of lovingly caring for the car, Mr. Boitz passed the special to its fourth owner, Mr. Earl Benz of Oregon. Mr. Benz very rarely used the car, and kept it tucked away until the late 1980s when it was painted red and purchased by a West Coast dealer who sold the car to its present owner in 1989. 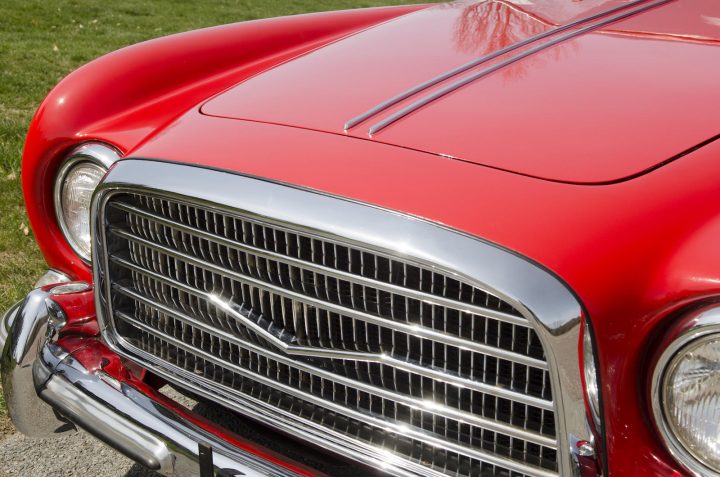 Throughout his 27 years of ownership, the consignor has diligently maintained and preserved this beautiful piece of automotive history. The special’s body is in excellent condition structurally and very presentable cosmetically. With the exception of the two repaints, the steel body (very rare for a Vignale) appears to be all original. The original medium metallic blue can still be found in numerous locations when trim is removed. The glass is also thought to be all original, the Italian made side windows all possess the code – 22-10-55 – which is believed to represent the date of manufacture. The windshield and rear window are held in place by a unique and unusual channel lock which has also been seen on Touring Hudson Italias. The Michelotti design provides a fantastic treat to all those fortunate enough to lay eyes on it. With the exception of the carpet, the interior is thought to be all original and shows a beautiful layer of patina throughout. Everything functions as it should, including the sliding roof. With just above 40,000 believed original miles, mechanically the car is in fantastic shape. The Cadillac Eldorado OHV V8 containing larger Lincoln pistons runs great and has been maintained to an extremely high standard over the years. It should be noted that the ignition has been upgraded to electronic and the generator was removed, being replaced with an alternator. 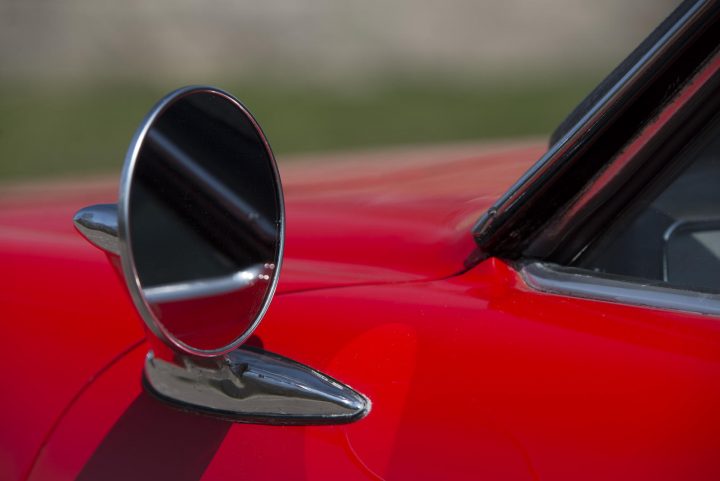 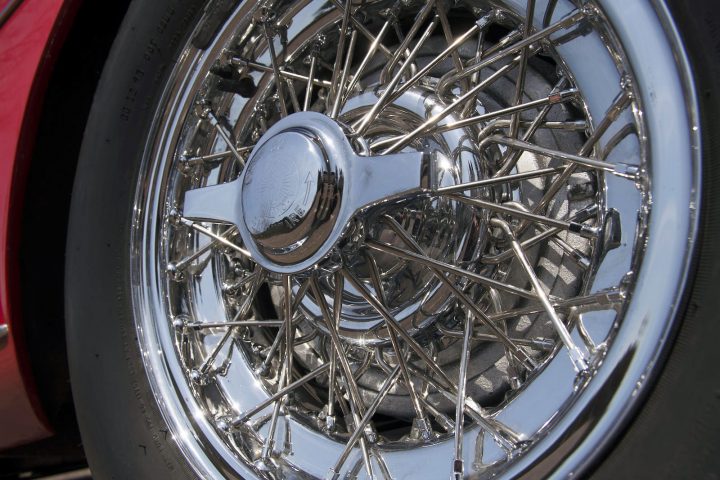 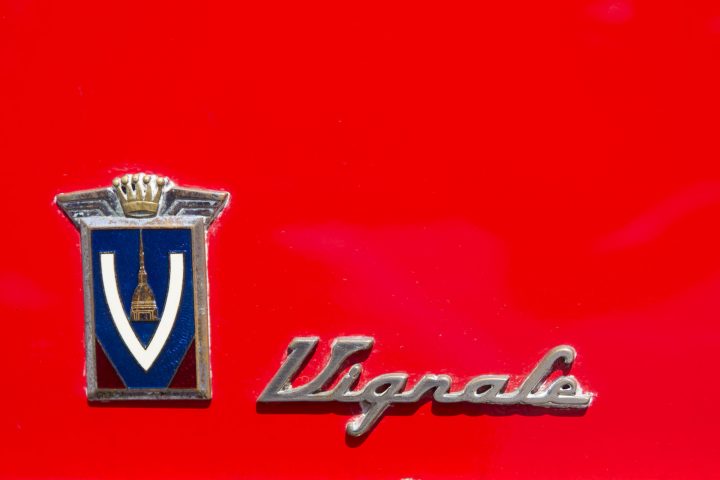 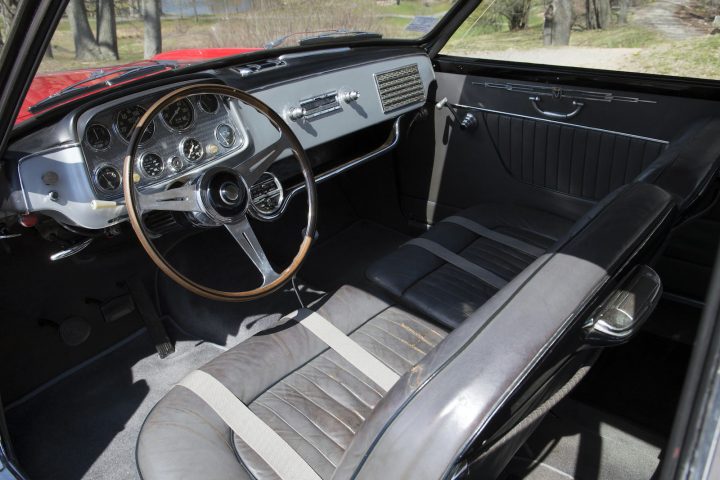 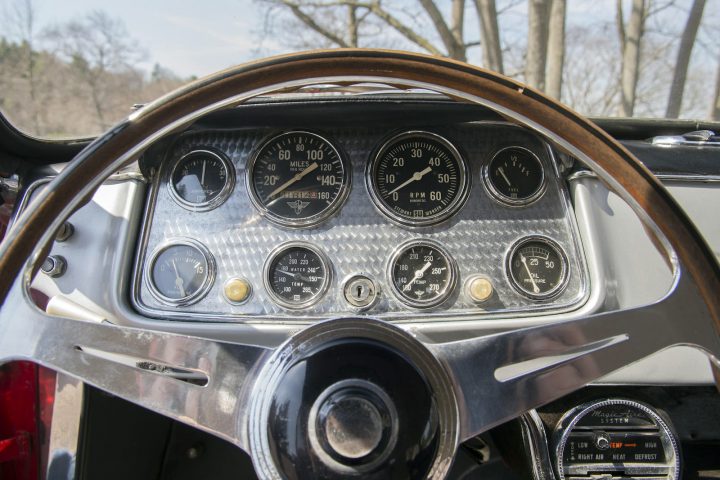 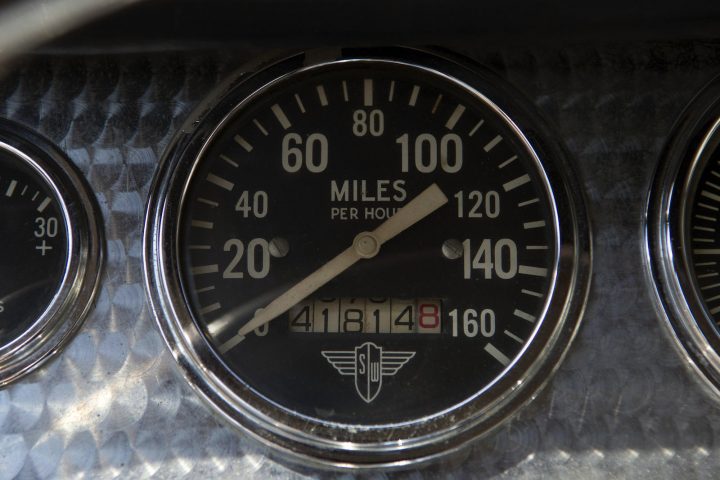 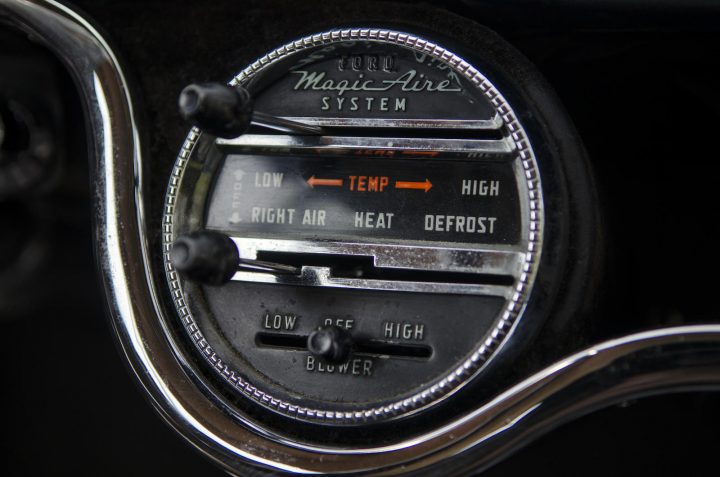 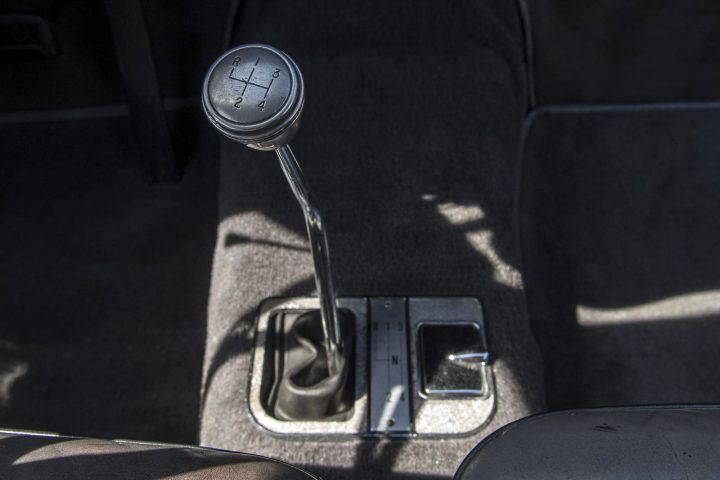 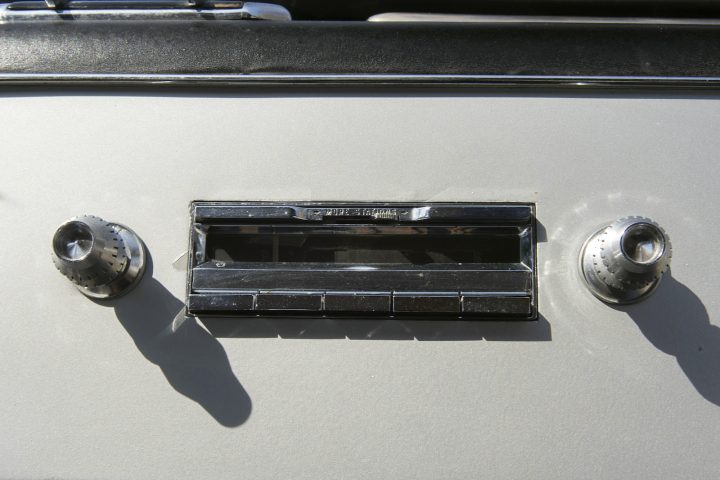 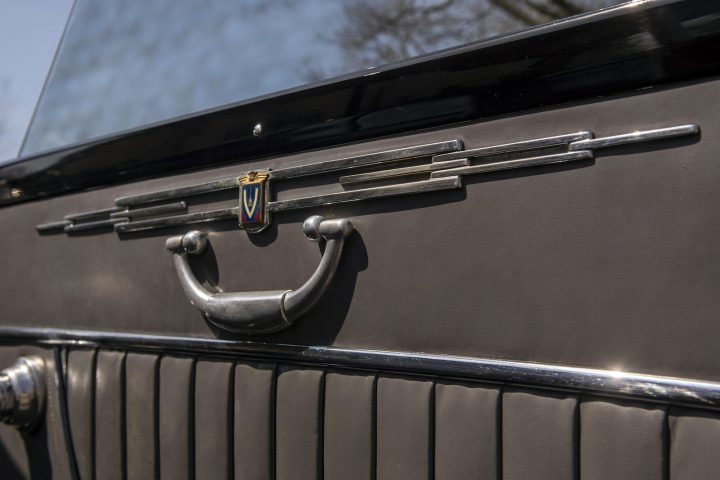 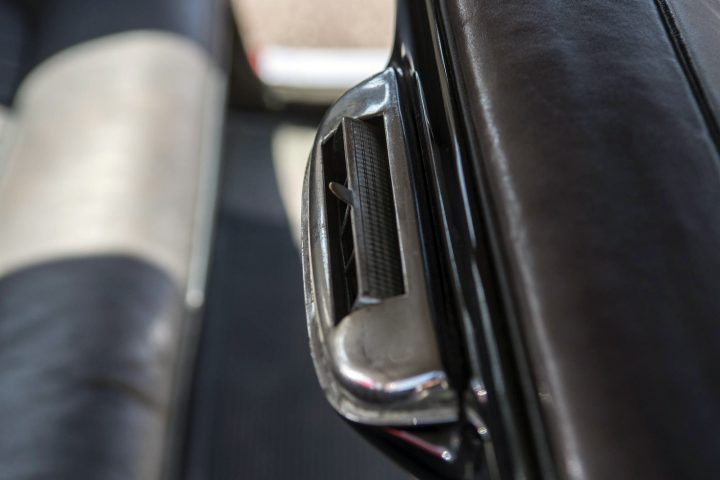 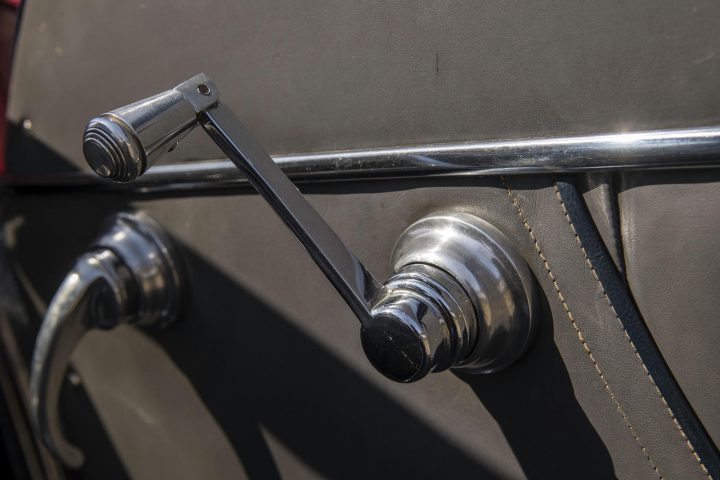 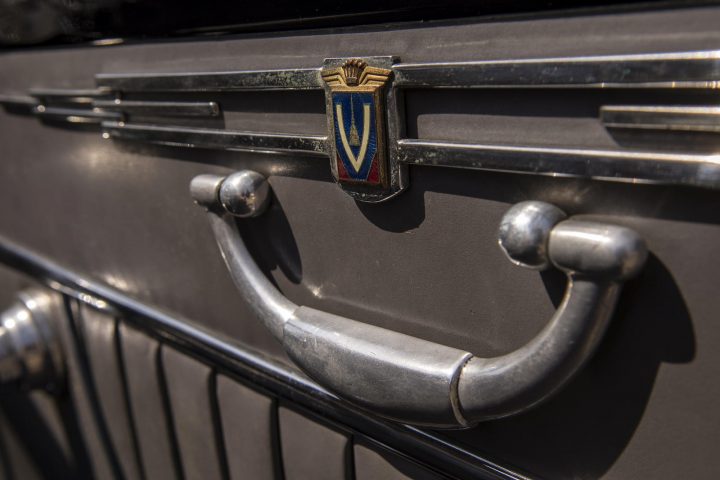 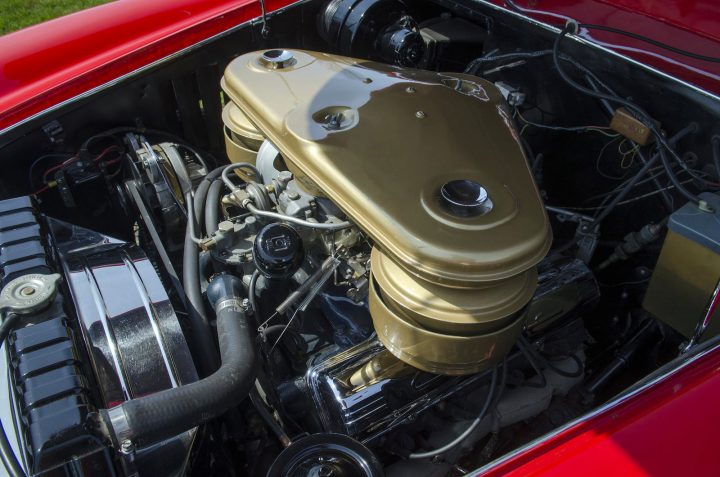 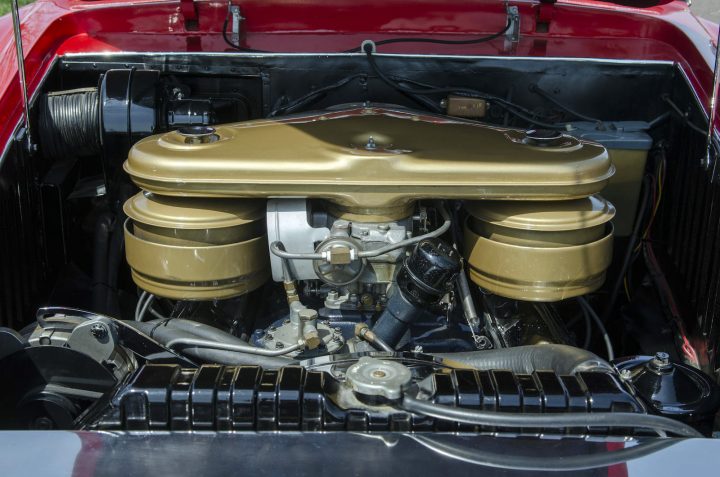