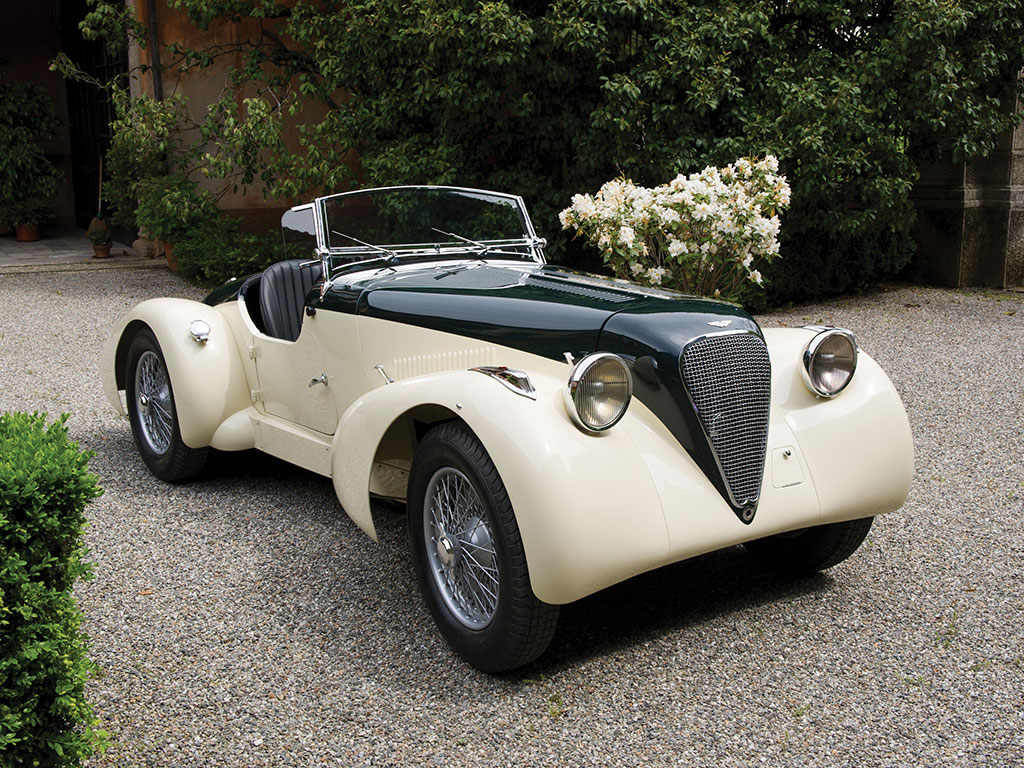 Rarer than an Ulster Team Car, capable of reaching speeds over 100 mph in 1938 and with a modernlooking aerodynamic body that continues to turn heads even today, the C-Type was Aston Martin’s last model before World War II, and a car to be proud of. It signifies the end of an era even while invoking the image of the future.

The cancellation of the 1936 Le Mans was a crushing blow for Aston Martin; coming high off a class win in 1935, it was supposed to be an easy win. More than that, the marque had just spent years producing its newest model, the 2-Litre Speed Model. Like the one offered here, they were equipped with Claude Hill’s latest engine, a 2-litre with larger carburettors, higher lift cams and importantly, fitted with a dry sump. To house this engine a new chassis was also made, stronger, shorter and wider than the former chassis. The cancellation of Le Mans meant that these vehicles needed selling; however, with the recent change in ownership, the Speed Models were forced to take a backseat, and it would take until 1940 for all 23 of the Speed Models to be sold.

In order to maintain the model, Aston Martin sold the Speed Model in several forms – the last of these would come to be called the Type C. The Speed Model presented here, A9/722/U, is one of only eight Speed Models bodied with the Type C body; this body had steel-framed bodies designed by Claude Hill. An engineer by trade, he focused on the aerodynamic efficiency of the bodies, hence the very smooth, streamlined look. The main body panels were constructed of light alloy and the wings from steel. First introduced to the public at the 1938 Earls Court Motor Show, the final iteration of this design featured the headlamps dramatically set behind the rounded radiator shell. The Type C’s were nearly 20 mph faster than the open-wheeled and 2/4-seater bodied cars, almost certainly as a result of their wind-cheating shape.

Chassis number A9/722/U was one of the original three Type C’s produced, and the first one after the prototype. Registered KMD 69, a registration it still holds today, the car took place in the RAC Rally that April, driven by Aston Martin owner Mr P.B. Mayne, and finished 8th in class. Shortly thereafter, the car lapped Brooklands at an average speed of 94 mph. Presumably at this time, the car remained property of Aston Martin as the car’s first private owner purchased the car in July 1939. Intriguingly, the car is photographed at Le Mans in June 1939 alongside Robert Hitchens and Mortimer Goodall’s Aston Martin Speed Model, car number 29.

After the war, the car was sold to a Mr Crawford, who still owned the car in 1953 when the build sheets recorded an engine rebuild. At some point in its history, the body was detached from the chassis and is thought to be lost to time. Under current ownership, KMD 69 was reunited with what is believed to be the majority of an original Type C body and passed to renowned marque specialist Ecurie Bertelli to receive a full restoration to original specifications, which included stripping the found body to bare metal before re-spraying it in the original duo-tone colours of biscuit and green.

Since the restoration, the Type C has been displayed at the 2012 Villa d’Este Concours d’Elegance and Aston Martin’s 2013 Centenary Celebrations. Further to those events, the Type C has run a handful of vintage driving events as well, including the Ennstal Classic, Paris-Madrid Rally, the Sanremo Rally Storico and finally the Grand Premio Terre di Canossa each year from 2014–2016, winning a prize at the associated concours in 2014. As such, the car is accompanied by a FIVA passport, category A/3.

One of Aston Martin’s more unusual models, but certainly worthy of the marque’s reputation for high-speed sports cars given their full competition specification, the Type C should not be overlooked.