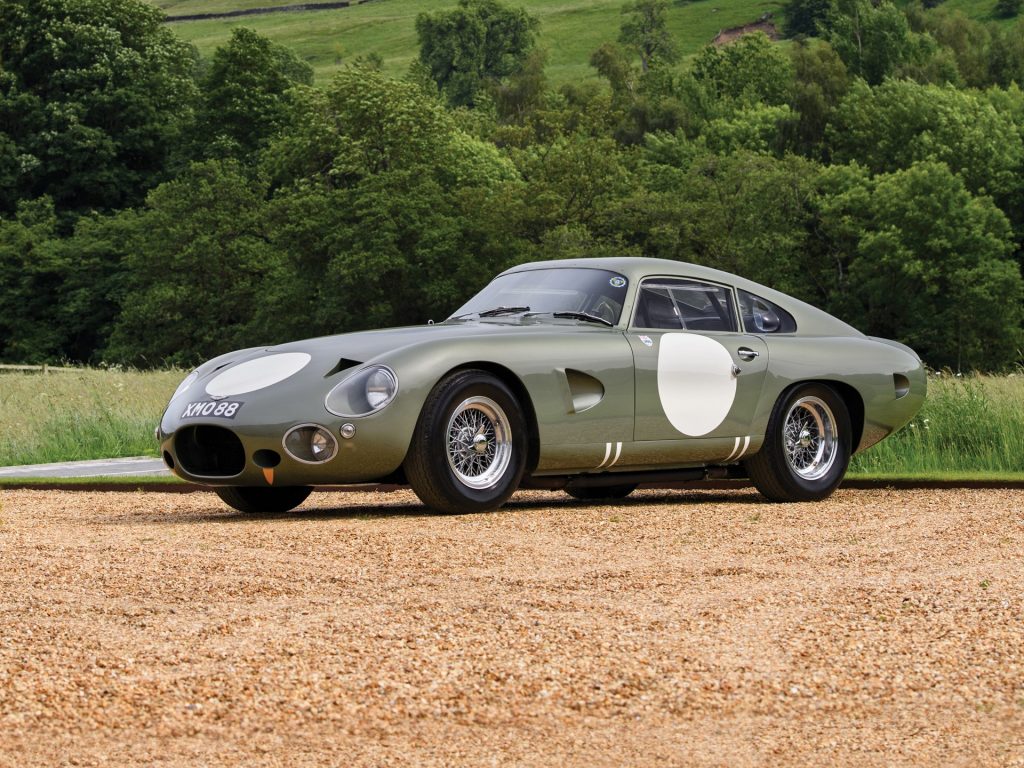 After winning the World Sportscar Championship in 1959 following 1st-place finishes at Le Mans, RAC Tourist Trophy, and Nürburgring, David Brown pulled Aston Martin out of sports car racing. After another unfortunate season of Formula 1, which sounded the death knell for machines such as the DBR4, the racing department shut its doors at the end of 1960. For David Brown this was not entirely bad news, as he could focus on his new line of road cars – the previous year had seen the introduction of the DB4GT – and leave the racing to the privateers.
It was not long, however, before the Aston Martin dealers on the continent were begging for a return to Works racing. Their thinking being, rightly so, that factory competition helps sell cars – and so David Brown approved what would become the first of what would eventually come to be four “Project cars” – sports car racing vehicles all developed from the DB4GT chassis.
The first Design Project, DP212, was conceived and executed in five months and was nearly all DB4GT in regard to its chassis and mechanics. The wheelbase was extended by an inch, and instead of the standard platform, replaced by box-frame sections. Truly different was the body shape – very sleek and seemingly aerodynamic, comprised of very lightweight magnesium/aluminum alloy. With an increased engine capacity and triple Weber carburetors, DP212 had a top speed of 175 mph. Driven by Richie Ginther and Graham Hill at Le Mans in 1962, the car placed 5th on the grid.
It became clear, however, that DP212 suffered from rear-end lift at high speed. Both Ginther and Hill complained of it at Le Mans and following tests at MIRA, Aston Martin engineers would find that nearly a quarter of the weight was lost! Subsequently, a rear spoiler was added along with an extended and lower nose; this would help engineers plan for the following Project Cars.
For the 1963 season, two additional Project cars (dubbed DP214) were created to rival Ferrari’s entries. Built for the GT class, each DP214 was required to have a DB4GT chassis number to conform to regulations. In reality, however, the chassis was entirely different from standard. To lighten the vehicles even more, the box-section chassis was drilled, and the frame had aluminum floorpans attached. Bending the rules even further, the engineers moved the engine back by eight inches, ensuring less rear-end lift. The engine capacity was increased yet again, and both cars were fitted with a David Brown S432 four-speed gearbox. The body was also designed with DP212 MIRA tests in mind: both DP214s were fitted with a low nose cone ending in a smaller radiator intake, and a sizable Kamm tail, giving the bodies a truly magnificent aspect. All in all, DP214s were a full 13 kg lighter than DP212, and nearly 200 lighter than a DB4GT. Both DP214s would go on to compete in the 1963 and 1964 race season, winning both the Coppa Inter-Europa and the Coupes de Paris, while also scoring other podium finishes. Notably, at Monza, the DP214 driven by Roy Salvadori defeated the Works 250 GTO driven by Mike Parkes in the three-hour race supporting the Italian GP.

It was the Works entry for the 1963 Le Mans Prototype Class that truly set the bar for what the Aston Martin engineers could do. A wholly unique competition car, the Aston Martin Design Project known as DP215 was to become the last racing car built by the factory, and the ultimate evolution of the Aston Martin GT racers. It was ordered by John Wyer, designed by Ted Cutting, had an engine from Tadek Marek, and was driven by Phil Hill – the great names associated with DP215.